Minsk regime began to oppress the Polish minority in Belarus 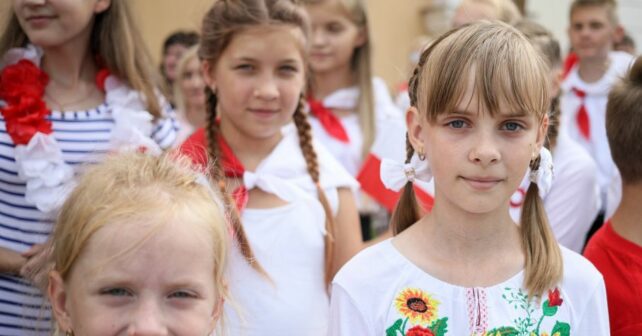 The regime’s revenge on the Poles for supporting the opposition – schools are being closed, leaders of Polish national unions are arrested and diplomats expelled from the country. The article was prepared for publication by volunteers of the Lithuanian editorial board of the international intelligence community InformNapalm.

Diplomatic crisis and repression against members of Polish national minorities

On March 9, Minsk announced the expulsion of the consul of the Consulate General of the Republic of Poland in Brest Jerzy Timofejuk. On 28 February, a diplomat attended an unofficial event to commemorate the participants in the anti-communist underground in Poland after World War II. The event took place at the Polish Social Scout School named after Romuald Traugutt in Brest. 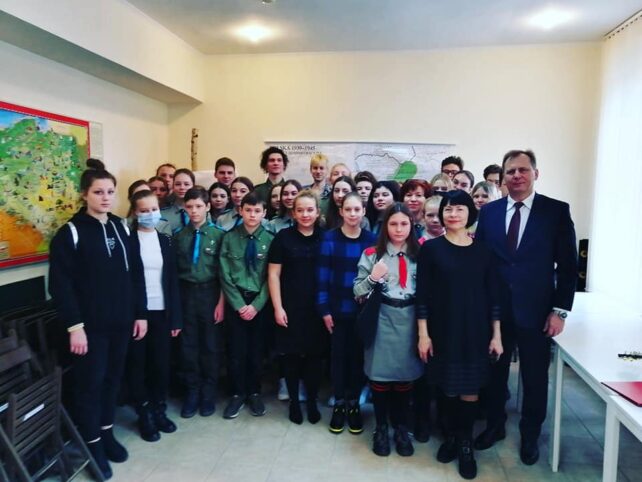 The Belarusian authorities explained: “The cynical justification of the genocide of the Belarusian people, gross violations of the obligations of the Polish side to prevent the glorification of Nazism are absolutely unacceptable.” On March 10, the Brest prosecutor’s office opened a criminal case on the glorification of war criminals and soon demanded to liquidate the Polish school in Brest. Later, its director, Anna Panisheva, and one of the co-founders, Alexander Navodnichy, were detained.

Two days later, on 11 March, the Charge d’Affaires ad interim of Poland in Belarus, Martin Wojciechowski, was summoned to the Belarusian Foreign Ministry, and the head and consul of the Consulate General of Poland in Hrodna, Jarosław Księżyk, was expelled from the country. The reason is “an excessive, asymmetric and destructive response of Poland to a legitimate and motivated decision of Belarus”. On March 12, in response to the actions of the Belarusian authorities, Poland expelled two consuls of Belarus – from Warsaw and Bialystok.

The authorities did not stop there and took up the unregistered Union of Poles in Belarus. On March 16, security officials came to the Polish school named after Stefan Batory at the Union of Poles in Grodno. In this school, children learn Polish language, literature and culture. Representatives of the Prosecutor’s Office asked about the teachers, inquired about maps, curricula and textbooks, and asked whether the school celebrates Polish national holidays and invites Polish diplomats and representatives of the Belarusian authorities to them. Exactly the same checks took place in the departments of the Polish public school in Brest, Baranovichi, Lyakhovichi, Volkovysk.

A week later, on March 23, the head of the Union of Poles in Belarus, Anzhelika Boris, was detained. The Leninsky District Court of Grodno arrested her for 15 days. The reason was the unauthorized craft fair “Grodno Kazyuki 2021”, which took place on March 7 and was organized by the Union of Poles. On the same day, Deputy Foreign Minister of Poland Marcin Przydacz said that the Polish consulate in Grodno was contacting the Belarusian authorities to find out the reason and details of the detention. A Belarusian chargé d’affaires ad interim was summoned to the Polish Foreign Ministry, and the ministry itself called on the authorities to stop the repression of the Polish minority in Belarus. The judge who sent Angelica Boris to jail was banned from entering Poland indefinitely.

Head of the Union of Poles in Belarus Anželika Boris / PAP.PL photo

On March 25, security officials searched the apartment of Grodno journalist Andrzej Poczobut. Two laptops, disks, old telephones, literature and documents in Polish, and awards were seized from him. The journalist’s wife said that he was suspected of inciting racial, national, religious or other social hostility or hatred. The lawyer was not allowed to search, and Andrzej Poczobut was detained. The Director of the Office of the President of the Council of Ministers of the Republic of Poland, Michał Dworczyk, reacted to the journalist’s detention. On the same day, searches were carried out in the editorial offices of the Union of Poles in Belarus: Głos znad Niemna and Magazyn Polski – and in the office of the organization itself. Interior Ministry officials also visited the chairmen of the regional branches of the Union of Poles: Maria Tishkovskaya from Volkovysk and Irene Bernatskaya from Lida. They, like Pochobut, face charges of inciting ethnic hatred. Both women are recognised as political prisoners. 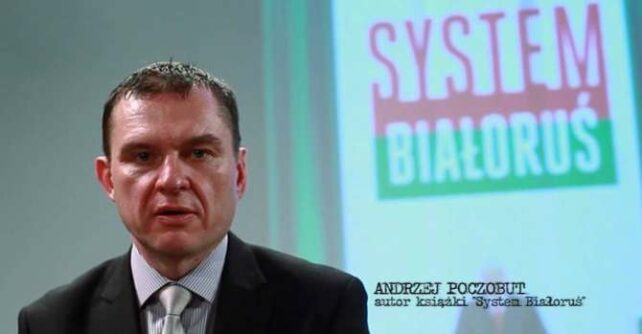 On the same day, a letter from the Smorgon prosecutor’s office came to the address of the Smorgon centre of language courses “Akademia.by”. The organization is asked to provide “information on the provision of services for teaching the Polish language”, as well as data on teachers and a list of Polish language learners at this center. It was written in the letter that this was due to “an emerging need”. A similar request was received by the Grodno training centre “Tree of Knowledge” and the private Vorono.by centre in Lida, which runs classes at the local church.

Repressed Poles in Belarus were supported by their compatriots in Poland and Lithuania. More than a hundred Polish scientists, artists, public figures and journalists from Poland signed an appeal to the Polish government asking to support victims of repression in Belarus, in particular activists of the Union of Poles. A similar statement was spread by the organizations of the Poles in Lithuania. The head of the Vilnius branch of the Union of Poles Marek Kubiak said that the community condemns the obvious violation of human and minority rights.

On 29 March, Polish President Andrzej Duda wrote a letter to US President Joe Biden, stating that “the regime in Minsk is attacking the Polish minority for political reasons as members of Belarusian society affiliated with transatlantic democratic institutions”. Andrzej Duda called on the United States to pay attention to the violation of human rights in Belarus, the persecution of its civil society, including the Polish minority, and to put this issue on the agenda at one of the next meetings of the UN Security Council.

Methodical Russification of the Polish Minority

The Polish minority in Belarus numbers officially 287,693 according to 2019 census. However, according to the Ministry of Foreign Affairs of Poland the number is as high as 1,100,000. It forms the second largest ethnic minority in the country after the Russians, at around 3.1% of the total population. Citing the previous poll held in 1989 under the Soviet authorities with 413,000 Poles recorded. 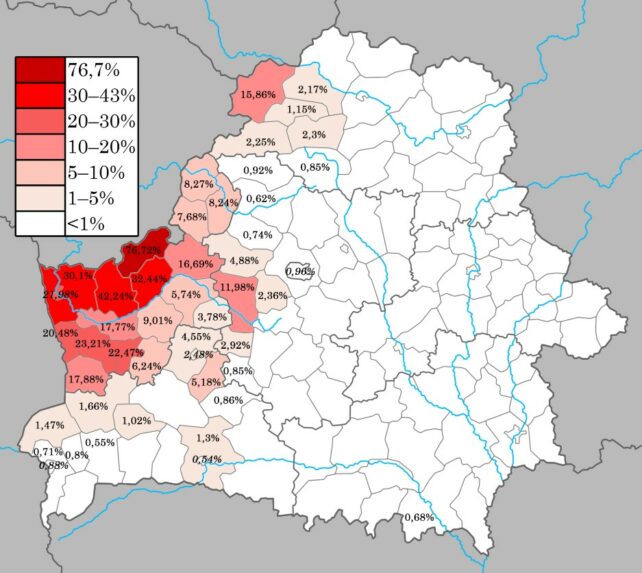 The Polish-Belarusian treaty on a good neighbourhood, friendly relations and cooperation, signed in 1992, formed the legal basis for the establishment of Polish schooling and educational associations in Belarus. As a consequence, due to the relatively favorable attitude of the Belarusian leadership, Polish minority activists began to organise Polish language classes, mainly in the Hrodna region, which, according to the 2019 census, is inhabited by 223,000 ethnic Poles. Their efforts resulted in a constant increase in the number of young people learning Polish and attending schools with Polish as the language of instruction.

Aside from the state school system, classes were also offered by community schools run by the Polish minority (in particular the Union of Poles in Belarus and the Polish Educational Society), activity clubs and selected kindergartens. In addition, based on international agreements, two schools with Polish as the language of instruction were opened – in 1996 secondary school was opened in Hrodna, and in 1999 – secondary school in Vawkavysk. Their construction and equipment was fully funded from the Polish state budget. These schools continue to be the only state schools in Belarus with Polish as the language of instruction.

Over the last decade Belarusian government have launched intensive measures to reduce the access of children to education in Polish as the language of instruction. The repression targeted all the forms of education that were available. Since at least 2015 the authorities of Hrodna oblast have imposed limits regarding enrolment in first grade at both schools regardless of the fact that the number of potential attendees (i.e. children whose parents applied for admission) has regularly exceeded the number of places available. This was despite the fact that, pursuant to the Belarusian constitution, national minorities are guaranteed free access to education in their native language.

These decisions resulted in a gradual decrease in the number of pupils attending the two state schools with Polish as the language of instruction (in Hrodna and Vawkavysk). A similar decrease was recorded for pupils taking part in any form of Polish language learning (including as part of additional language classes) in the state school system. In the 2003/2004 school year, the number of such individuals was around 14,000, in 2007/2008 it was around 10,000, in 2013/2014 7,000, and at present it is slightly more than 5,000. This latter number includes 913 pupils attending Polish schools in Hrodna and Vawkavysk, 128 pupils attending a bilingual school in Brest, 396 pupils who learn Polish as an obligatory subject, and 3,602 pupils who attend extracurricular Polish language classes.

Causes of the escalated conflict

From the very beginning of the protest movement, due to the rigged presidential election in 2020, in August, neighboring Poland, together with Lithuania, actively supports the Belarusian opposition and calls on the European Union to approve sanctions. Belarusian opposition television Belsat TV, a subsidiary of the Polish national broadcaster established by the Polish Ministry of Foreign Affairs and international donors, is also broadcasting from the Polish territory. Alexander Lukashenko has used such Polish support for the Belarusian opposition since the beginning of the protest movement to show the threat of an external enemy in charge of the protests. Alexander Lukashenko even accused Poland of wanting to take over the Grodno region, which is home to a large Polish minority and where protests were particularly strong. These accusations have provoked official protests from the Polish side, which, because of its recent history, firmly adheres to the doctrine that has been applied in Europe since World War II that existing national borders cannot be changed.