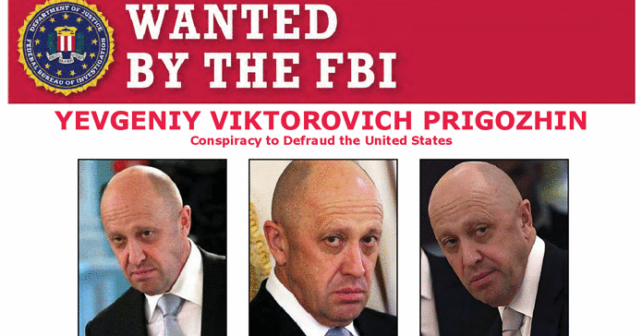 Yevgeny Prigozhin, a Russian oligarch often dubbed “Putin’s Chef” due to his close ties to Putin, has increasingly became infamous for his activities with Wagner mercenaries. Yet there is another field of activity that he is less known for, but not less active in – information warfare.

Prigozhin is a Russian oligarch, close Putin’s henchman, who spent nine years in prison, in the final period of the USSR after being convicted of fraud and theft. He emerged in the 1990s and currently oversees the Wagner Group, Russian mercenaries that have been constantly deployed in various conflicts of key Russian interest including Ukraine, Libya, Venezuela, Central African Republic and Sudan. Prigozhin also has been financing and directing the Internet Research Agency, also known the “St. Petersburg Troll Factory”, which actively produces disinformation targeting Europe, and the United States. Prigozhin has his disinformation assets have been involved in many countries to an extent that, U.S. government has announced a $250,000 reward for any information leading to his arrest.

This article analysis some of Prigozhin’s latest global information interference examples from around the world.

On April 15, U.S. Department of the Treasury’s Office of Foreign Assets Control (OFAC) re-upped sanctions on entities and individuals that tried to influence the 2020 U.S. presidential election at the direction of the leadership of the Russian Government. The updated sanctions are aimed at Kremlin-related 16 entities and 16 individuals that tried to “interfere and influence to influence or interfere with the U.S. elections and undermine public confidence in the election process.” Amongst the sanctioned entities are such infamous Russian propaganda websites as SouthFront and NewsFront, actively spreading propaganda in English and other languages and Strategic Culture Foundation, an online journal directed by Foreign Intelligence Service (SVR). Strategic Culture Foundation had a lot of its assets already removed from Facebook and Instagram back in September 2020. A network, including 6 pages, 23 user accounts, and 8 Instagram profiles with individuals associated with Russian intelligence services, were exposed in dealing coordinated inauthentic behavior. Pages mostly amplified anti-Western sentiment in both English and Russian, targeting mainly the United States and NATO countries. 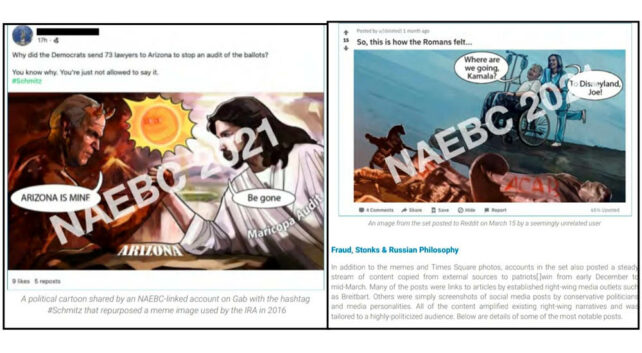 Examples of the posts populated by Prigozhin during the 2020 U.S. elections. (Twitter/@gal_sububan)

This time, U.S. Treasury has particularly focused on sanctioning Prigozhin’s disinformation in Africa, targeting his accomplices and three companies – Foundation for National Values Protection, Association For Free Research And International Cooperation and International Anticrisis Center. This is not the first time that Prigozhin’s name comes up in the topic of election interference. In 2018, United States by Special Counsel Robert Mueller filed a criminal indictment against Prigozhin for financing influence operations targeting the 2016 U.S. presidential elections. To which, Prigozhin responded by threatening to sue US. The same year, U.S. Treasure increased pressure on previously designated person Yevgeniy Prigozhin by targeting his physical assets, including three aircraft and a yacht, as well as employees of the Internet Research Agency, which Yevgeniy Prigozhin finances. This was done due to Internet Research Agency in connection with its efforts to interfere in the 2018 U.S. midterm elections.

In July 2020, The United States and European Union have imposed sanctions on Prigozhin for “Destabilizing Global Activity’. And at the end of February 2021, the FBI added Priogzhin to its Most Wanted list for his alleged “conspiracy to defraud the United States” from 2014 to 2018 and announced a $250,000 reward for any information leading to his arrest.

A very recent example of Prigozhin’s interference comes from Sudan. On December 8, 2020, Russia signed an agreement to establish a naval base in Sudan. According to the deal, Russia will establish and maintain a base close to the Port of Sudan on the coast of the Red Sea for a period of 25 years. If both sides agree, the deal can be extended for an additional 10 years. According to the agreement, the base would function as a logistical center and strategic foothold in the Red Sea region, connecting Asia and Europe. Russia has a vested interest in having permanent presence in Sudan and has been working on spreading positive narratives towards Russian presence in the country.

On May 27, 2021, Facebook removed a network of assets that was focusing on promoting a friendly image of Russia to the Sudanese people. In June 2021, more than 2,000 Central Africans have received food aid provided by Prigozhin 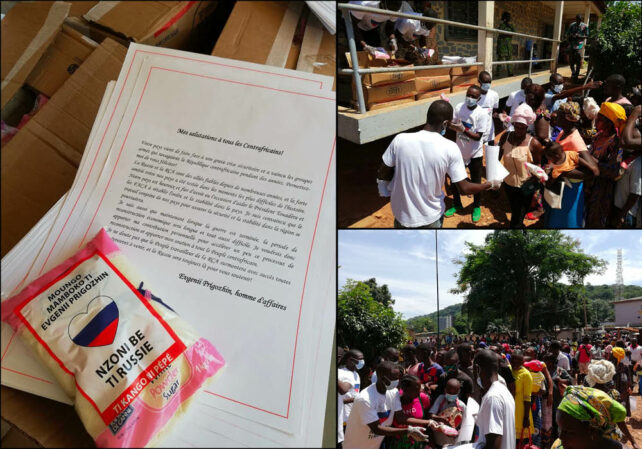 Prigozhin handed out food supplies to Central Africans with a Russian national-colored heart and text “on behalf of Yevgeny Prigozhin.” (Twitter/@RCAInfo)

These photos were later used as talking point by his information networks. 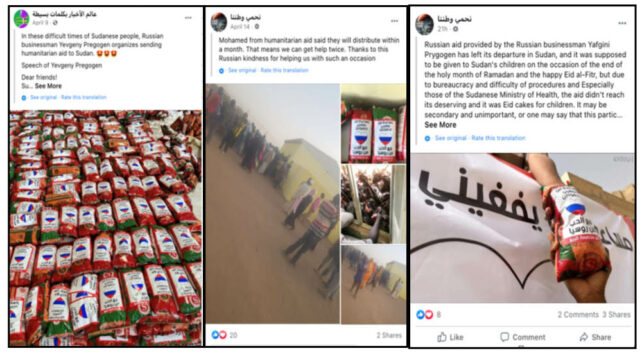 Examples of the posts populated by Prigozhin network operating in Sudan. These posts used photos form food donations rallying support for Prigozhin and Kremlin. (Taken down from Facebook)

At the same time, these accounts were smearing local leaders as U.S. puppets. This network worked to spread positive stories about Russia, Yevgeny Prigozhin and focusing on amplifying the benefits of the creation of a Russian military base in Port Sudan. 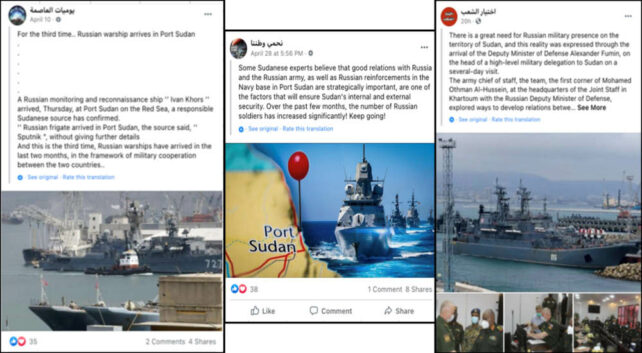 Examples of posts promoting the idea of a Russian base in Sudan. (Taken down from Facebook)

This is not the first time Kremlin information networks have been identified in Sudan. In 2020, Stanford Internet Observatory and Graphika found Facebook pages targeting Sudan that were associated with Russia as part of a larger Russian operation. In 2019 Facebook identified pages associated with entities tied to Prigozhin and the Wagner Group.

Lastly, Prigozhin‘s networks have been identified targeting American far-right communities with inflammatory and politically-divisive messaging. These networks have primarily used alternative online platforms, such as Gab or Parler, specifically targeting the far-right groups seeking refuge from being banned for their radical content on Facebook or Twitter. The latest discovered campaign began in November 2020 and was still active at the time of this publication. According to Graphika, this latest campaign continues to build on previous influence efforts ahead of 2020 U.S. presidential election.

The narratives disseminated by these networks have aimed to amplify tensions in the society, focusing on police violence, racial inequality, allegations of voter fraud, criticisms to President Joe Biden and U.S. government’s response to Covid-19. The lack of control and policies on foreign interference on these alternative platforms has allowed Prigozhin’s networks to deliver tailor-made political content for the far-right communities using these platforms. This operation has been attributed to people associated with previously working in the Internet Research Agency that is orchestrated by Prigozhin.

Oligarch Yevgeny Prigozhin is pulling the strings on a number of influence campaigns around the world on behalf of the Kremlin. Putin’s Chef became globally infamous for his mercenary armies carrying out the will of Kremlin around the world, yet his role in election meddling and influence operations is not in any way less important.

Moscow has never confirmed reports or association of Wagner mercenaries, just like Prigozhin denies any association with Wagner or the IRA. Even if the activities of Prigozhin remained unacknowledged and unpunished for years, it seems that the international legal noose is finally tightening. Prigozhin has been hit by U.S. sanctions for interference in 2016, 2018 and 2020 U.S. elections and a $250,000 reward for any information leading to his arrest. Prigozhin is wanted “for his alleged involvement in a conspiracy to defraud the United States”.