Russian Guards: baptism of fire in the industrial zone of Avdiivka 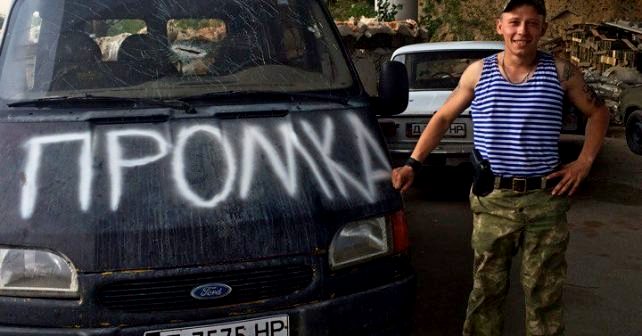 Putin’s Russian Guards are being battle-hardened in the Donbas flash points before the presidential elections in 2018.

A Russian war criminal, the soldier of the 46th Separate Special Operations Brigade of the Interior Troops of the Ministry of Internal Affairs of Russia, Kirill Yevgenievich Demenkov was spotted in the industrial zone of Avdiivka. It bears remembering that the operational scope of the Russian Guards includes eventual participation of its military personnel in international operations for “maintaining or restoring peace and security” with under direct orders from the President of the Russian Federation.

That is not the first time when our “hero” inadvertently helps us collect evidence of Russian soldiers’ presence in Donbas, not as consultants or instructors, but as active combatants. Demenkov has already featured in two other investigations of InformNapalm.

“Where are You?” – Kirill was asked. “Western outskirts of Donetsk…” – replied Ihor Ivanov, a photographer from Donetsk, helping us to locate the footage. 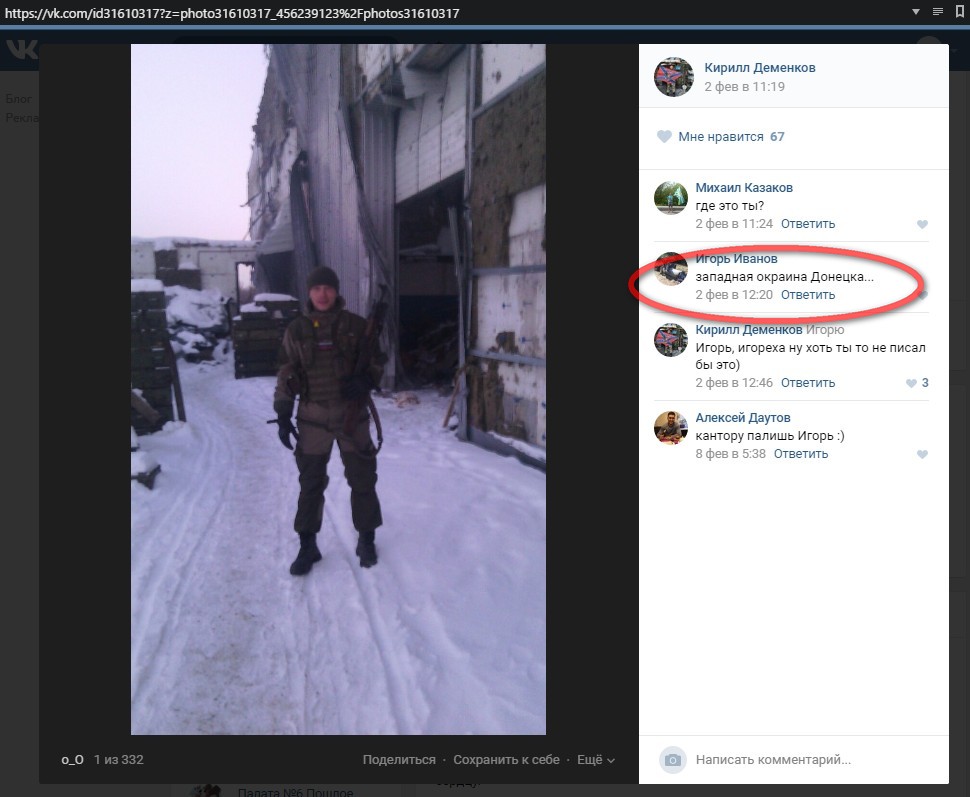 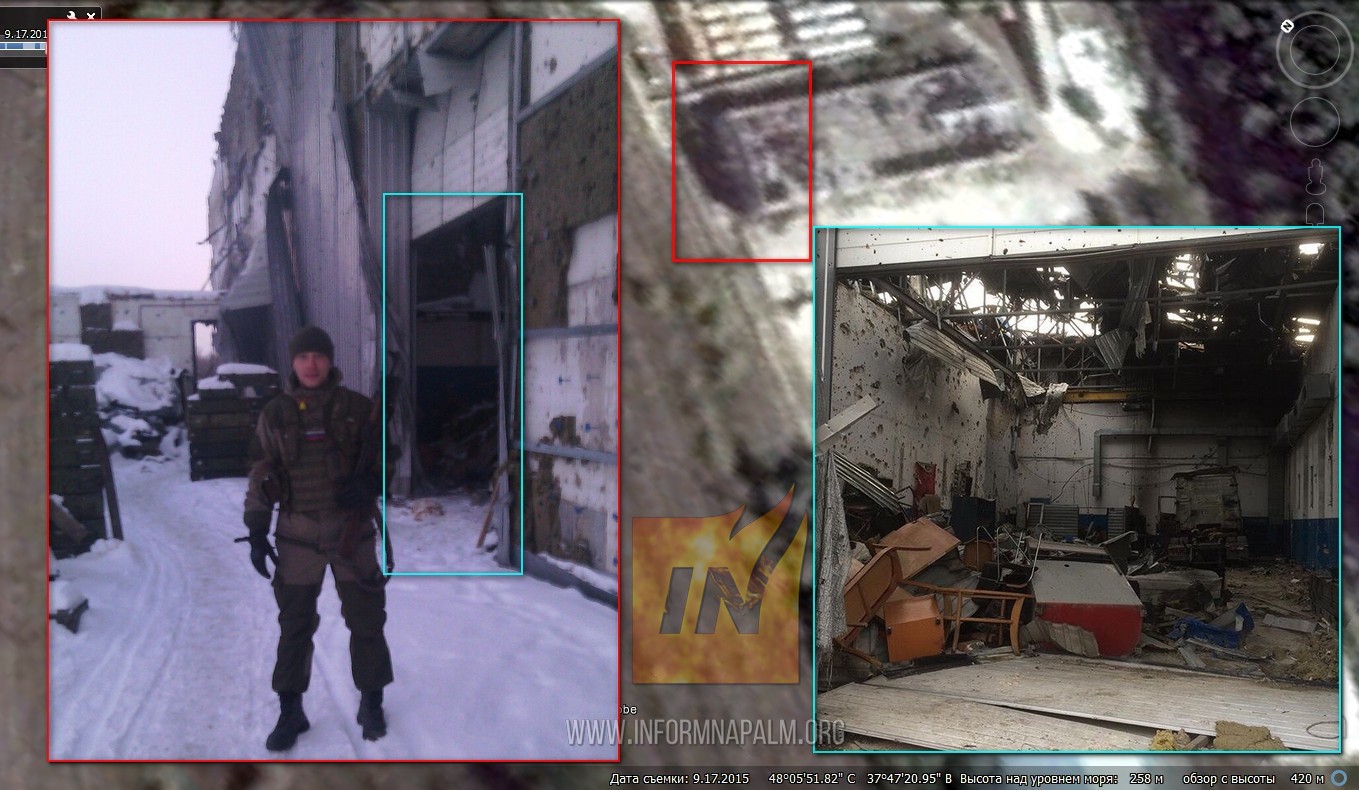 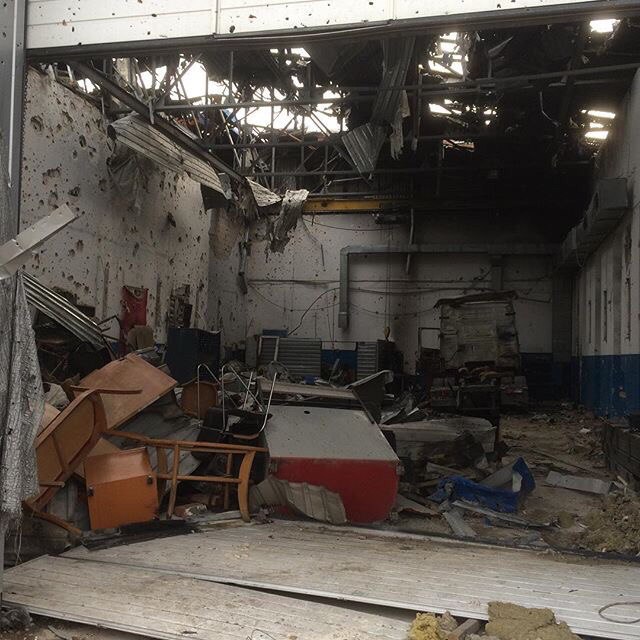 We’ve marked this location on the delineation map on liveuamap. 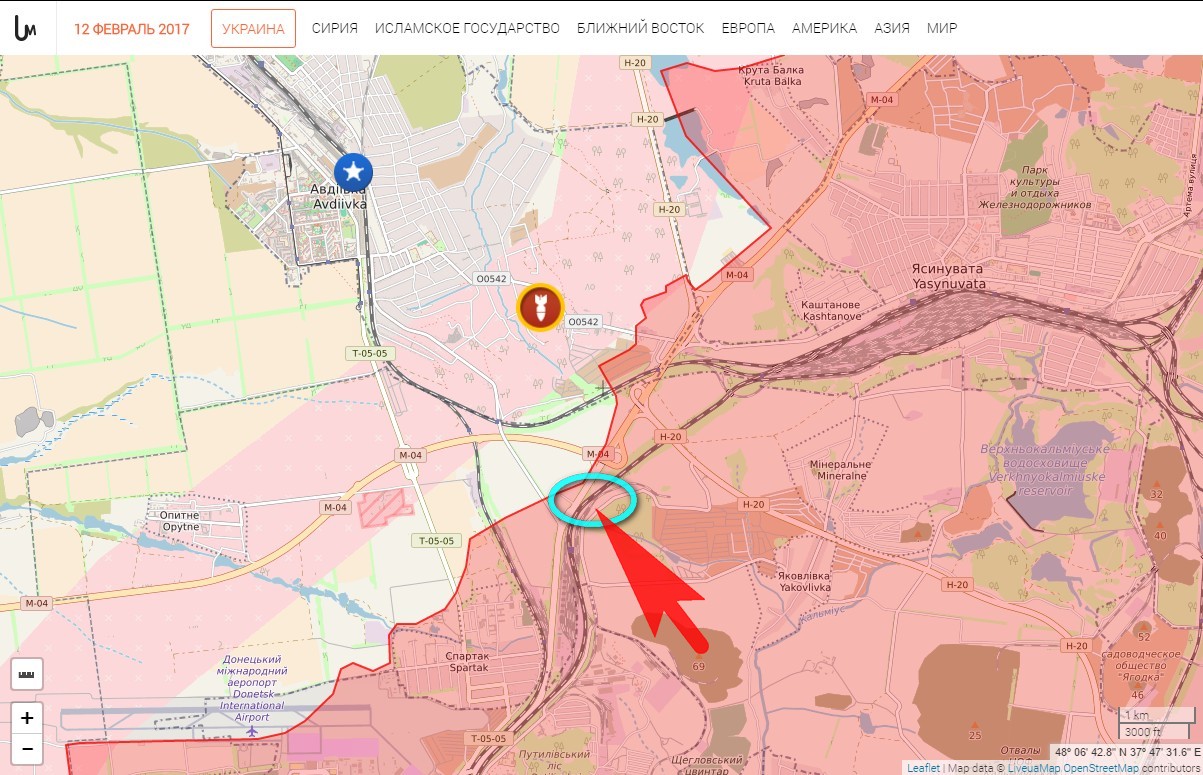 This time around, Demenkov operated mainly around the industrial zone of Avdiivka. Previously he had also taken part in the battle of Donetsk airport. 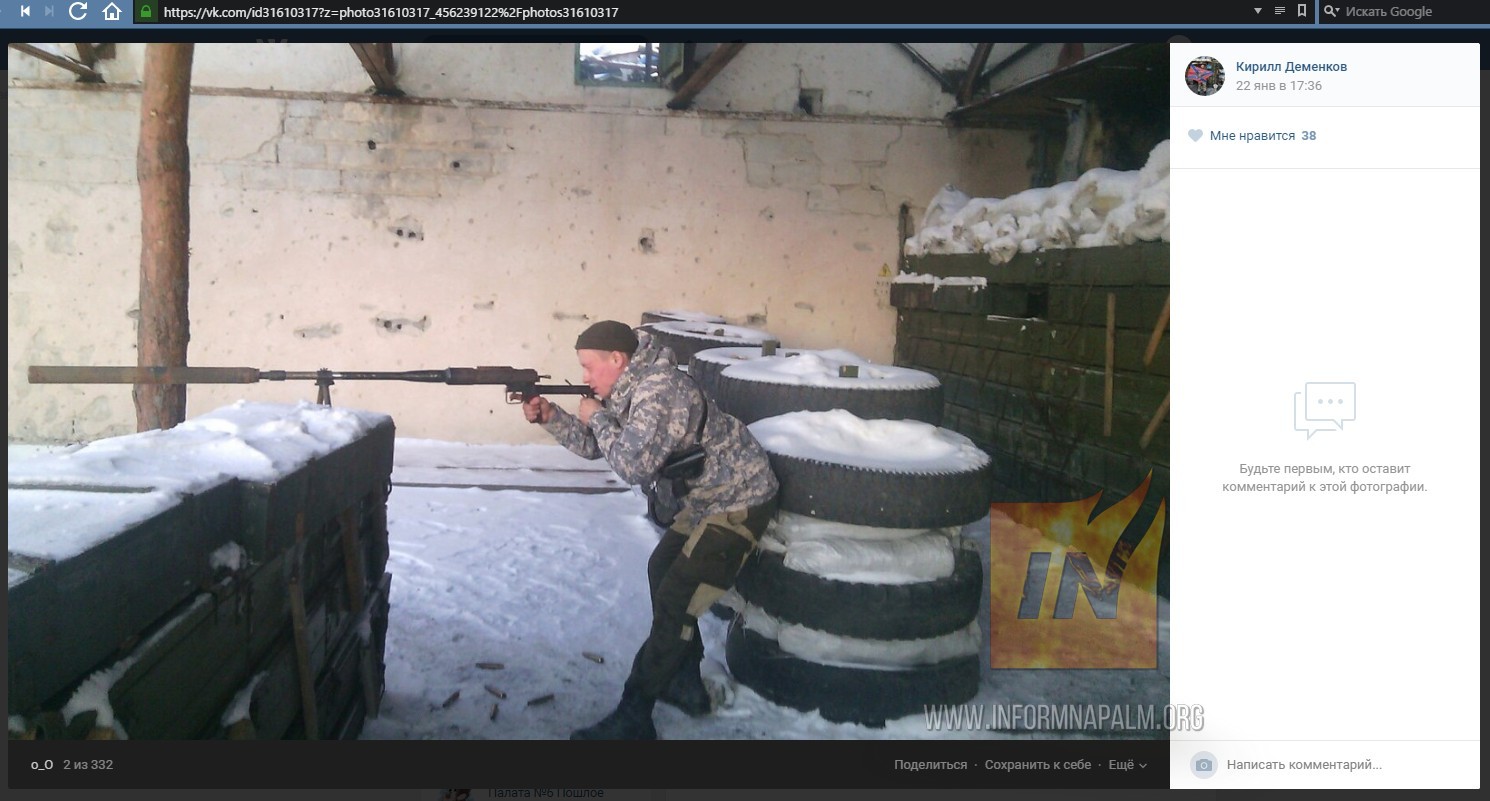 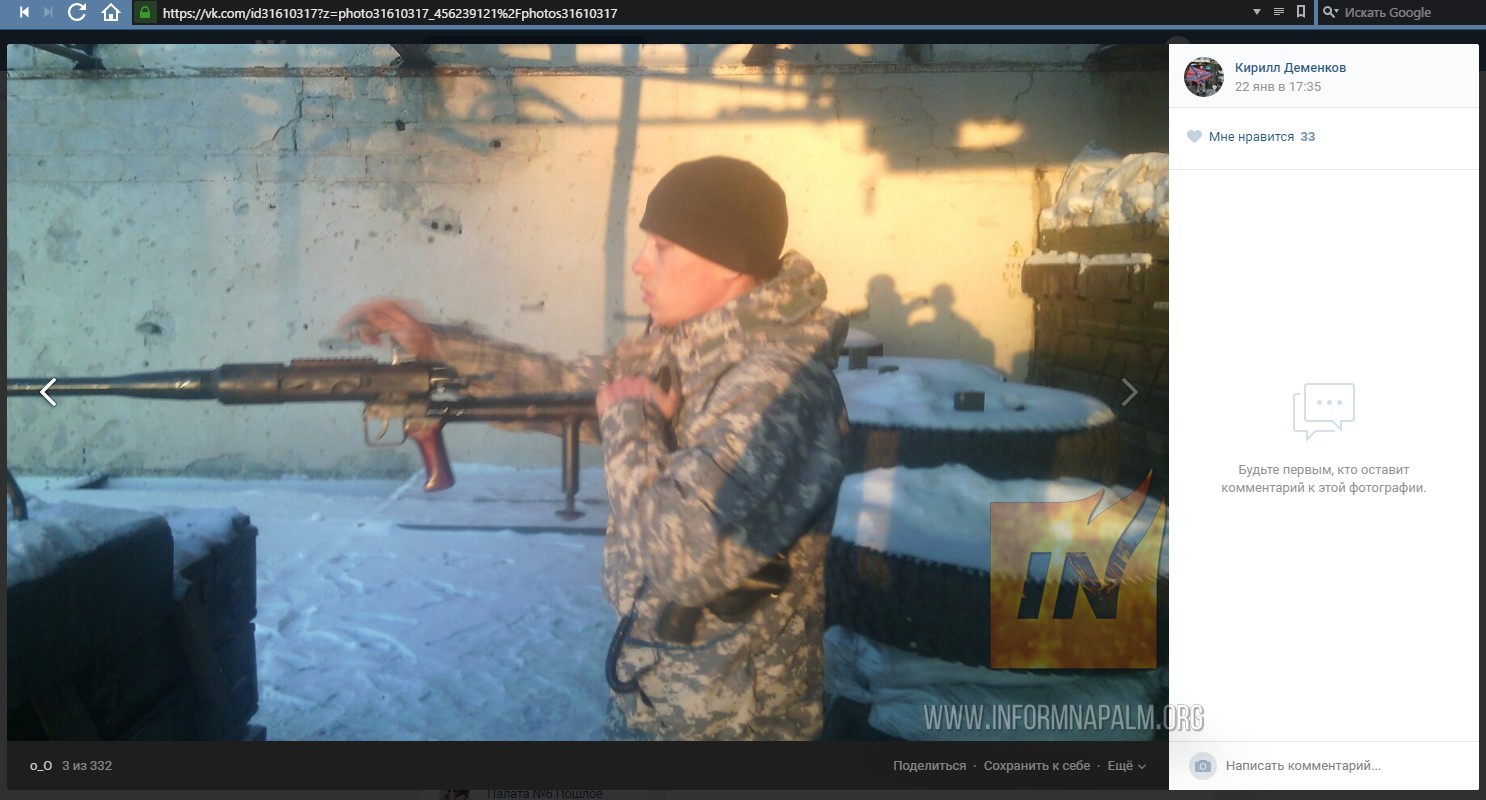 This photo was made under one of the bridges of Yasynuvata road junction in the vicinity of the industrial zone of Avdiivka: 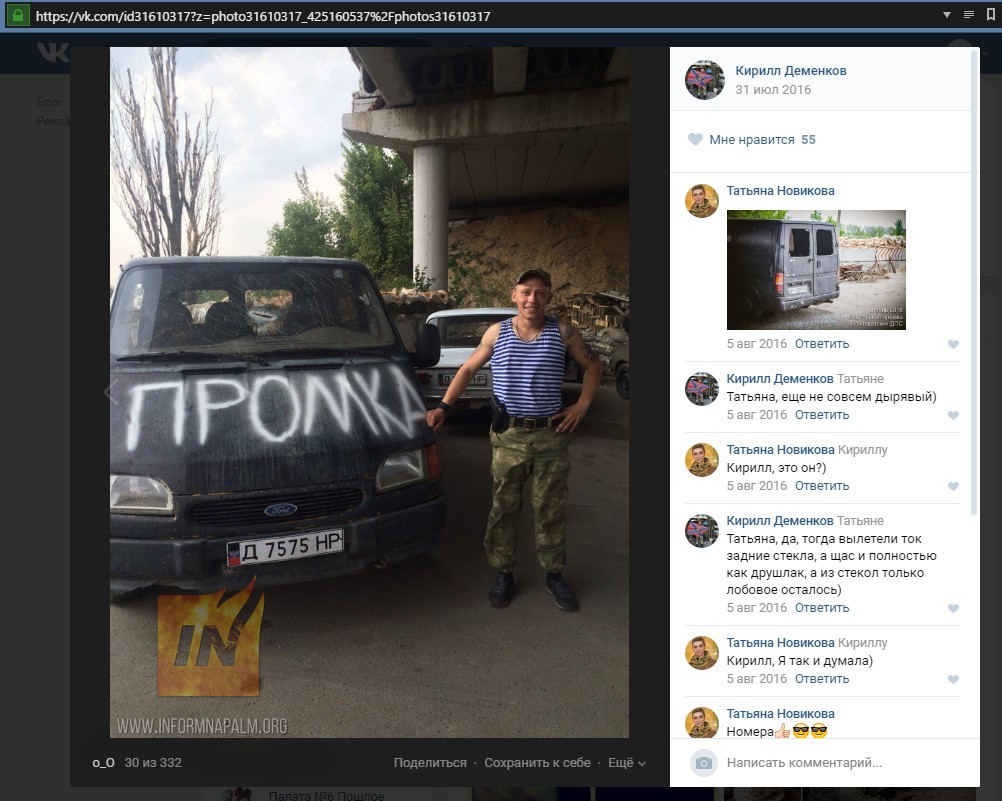 We have also marked another spot where Demenkov was spotted in November and December 2016 – a dense forest belt along the railroad, coordinates 48.110809, 37.791688 (the location was instrumentally identified). 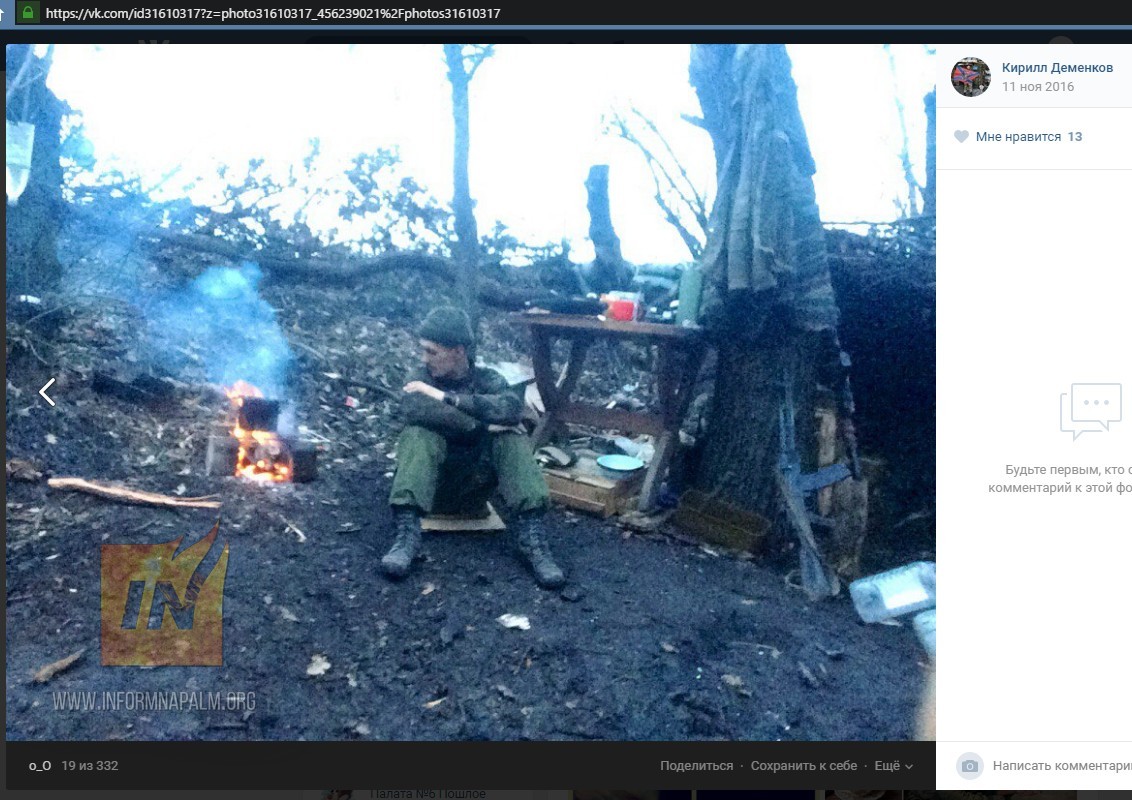 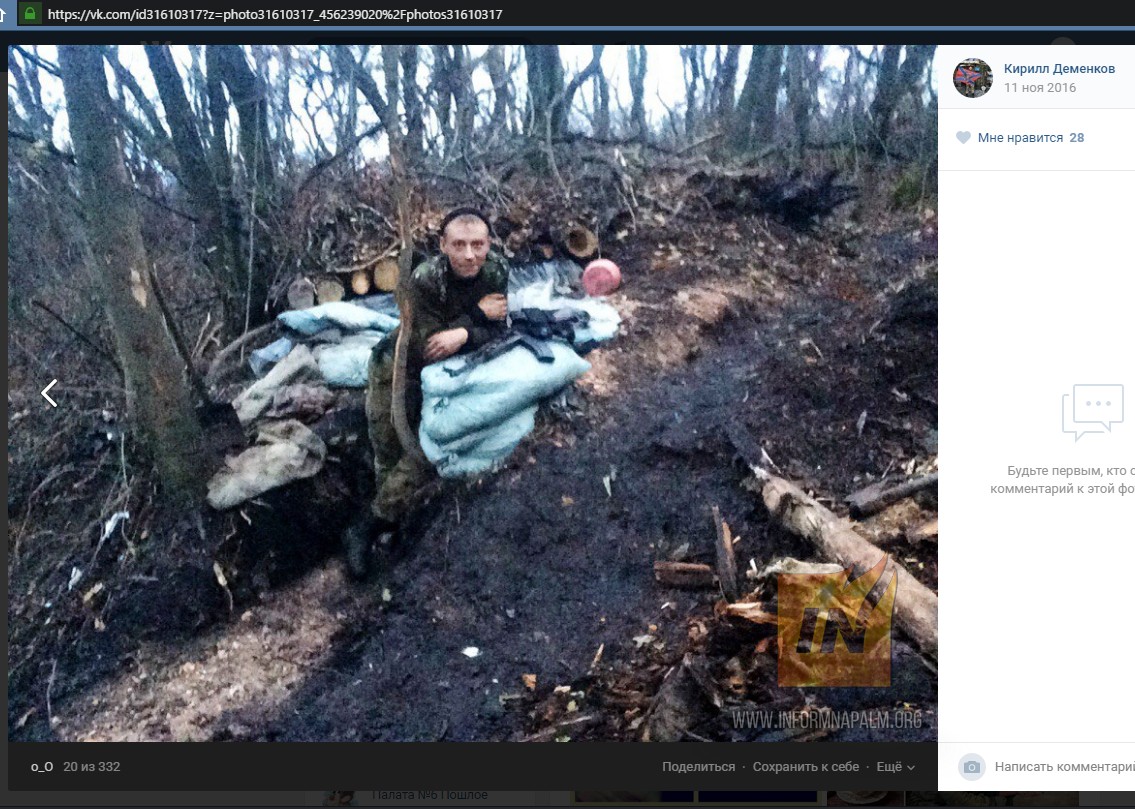 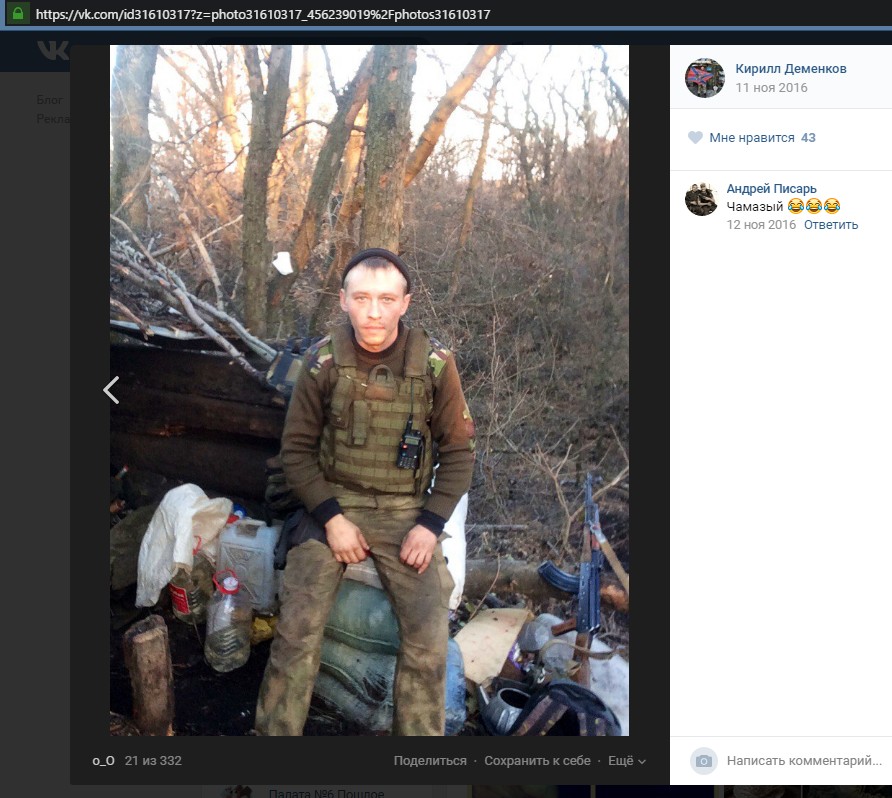 Ihor Ivanov, the photographer from Donetsk, left the following comment to this photo: “Guests came by…)))”. Who could have made this photo? 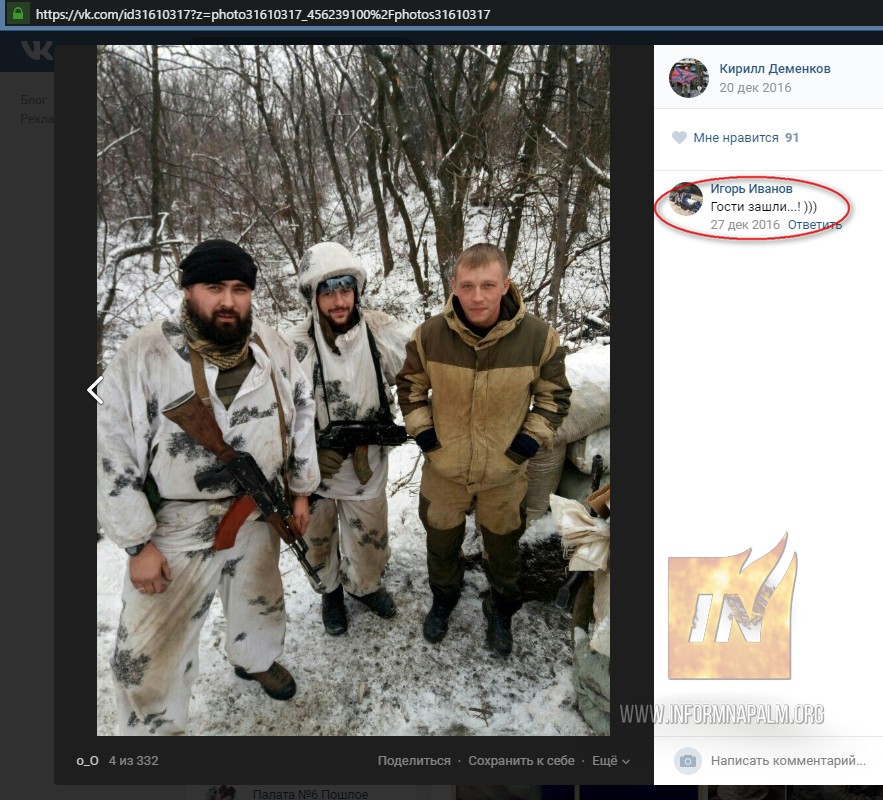 Let us identify the circle of this Russian soldier fighting in the industrial zone of Avdiivka.

Demenkov indicated in his VK profile status “The industrial zone of Avdiivka” and “married to Daria Siomkina”, there is a photo of them together in his profile’s photo album. 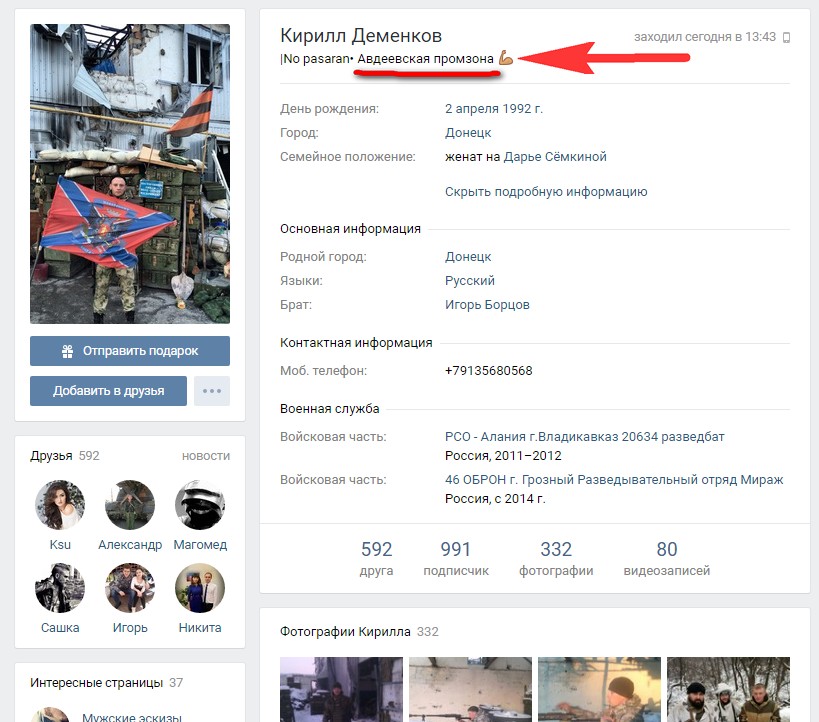 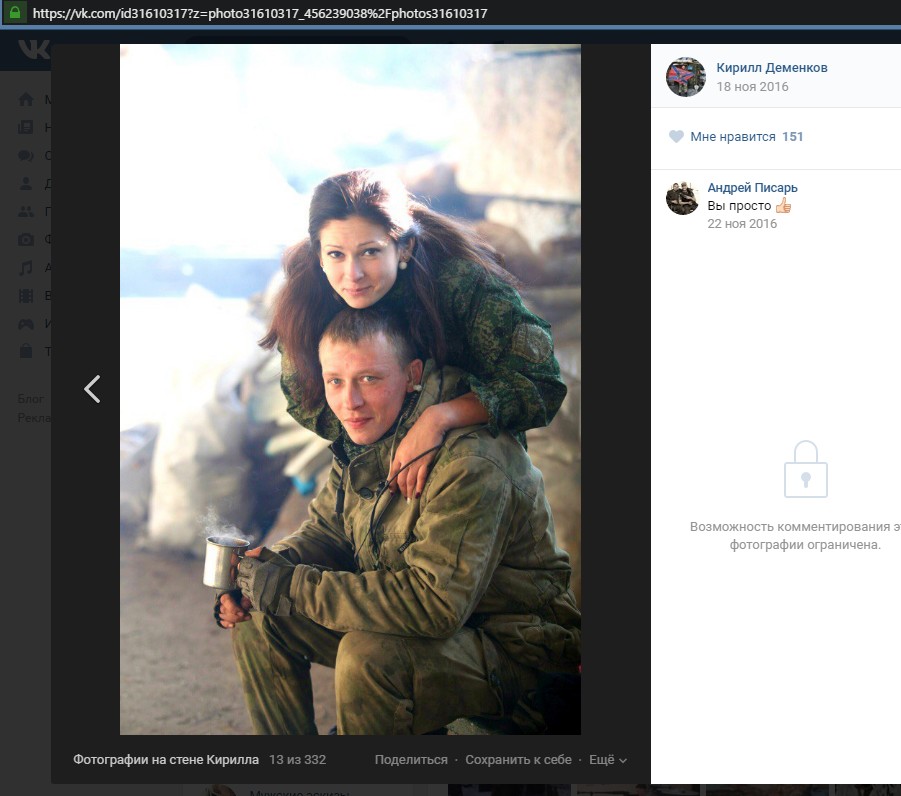 Daria Siomkina was previously spotted on a photo in the investigation of August 8, 2016, when InformNapalm volunteers identified a Russian mobile wound dressing room (AP-2) mounted on KamAZ-43114 chassis in Yasynuvata. This spot is 3 kilometers away from the industrial zone. Daria Siomkina serves in 11th Motorized Rifle Regiment of Russian occupation forces and provides medical assistance to yet living Russian occupants. We can see her on the photo sitting on the shoulder of another investigation subject. 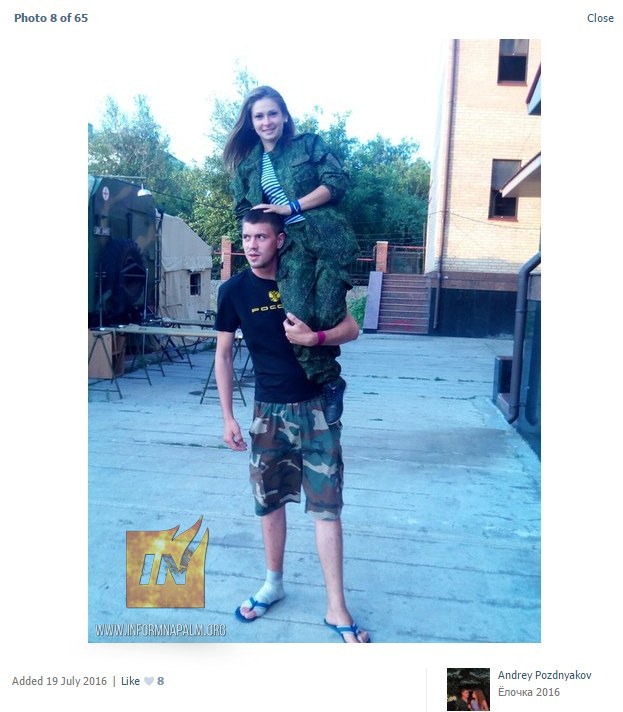 This is Igor Razdymaho, another soldier of the Russian National Guard, he was identified on numerous joint photos with Demenkov. 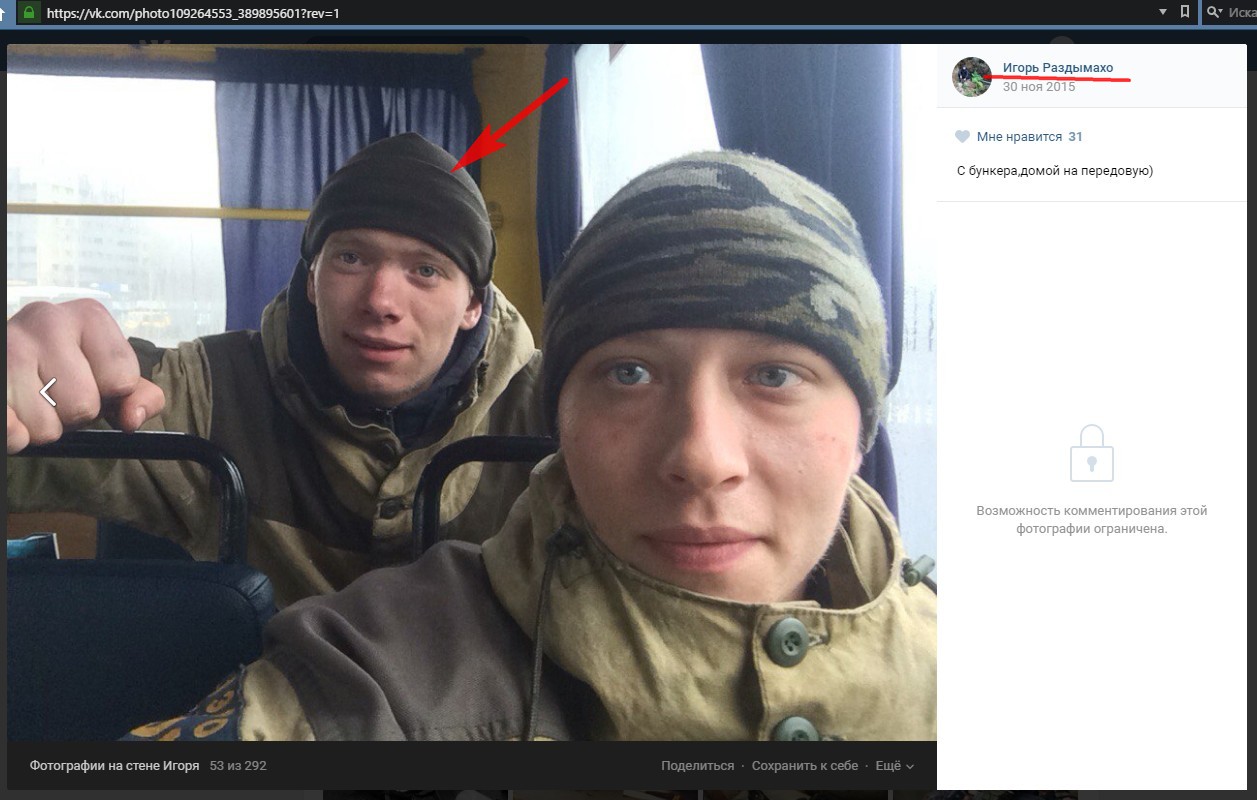 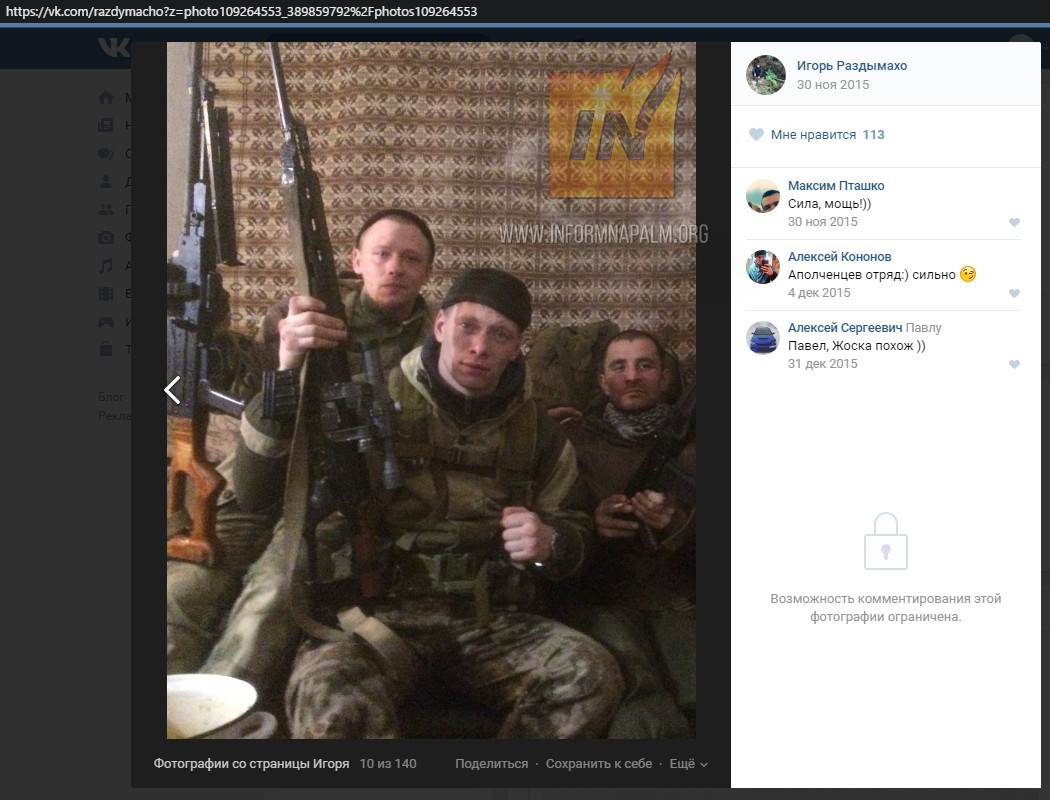 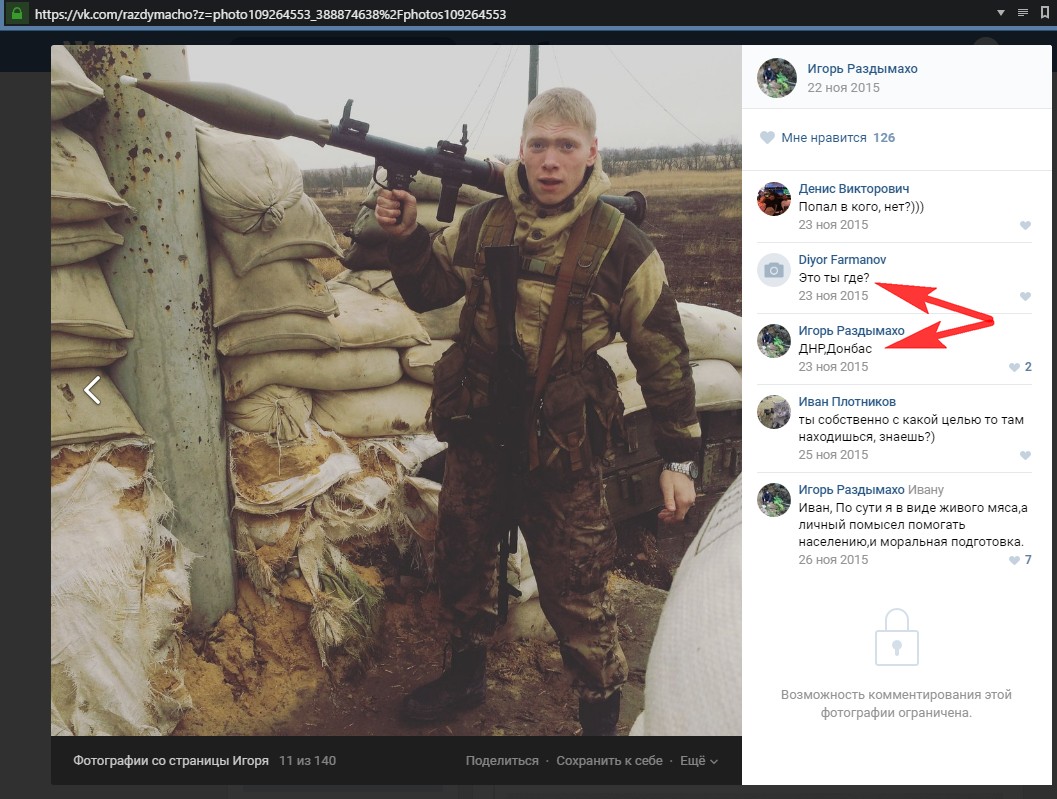 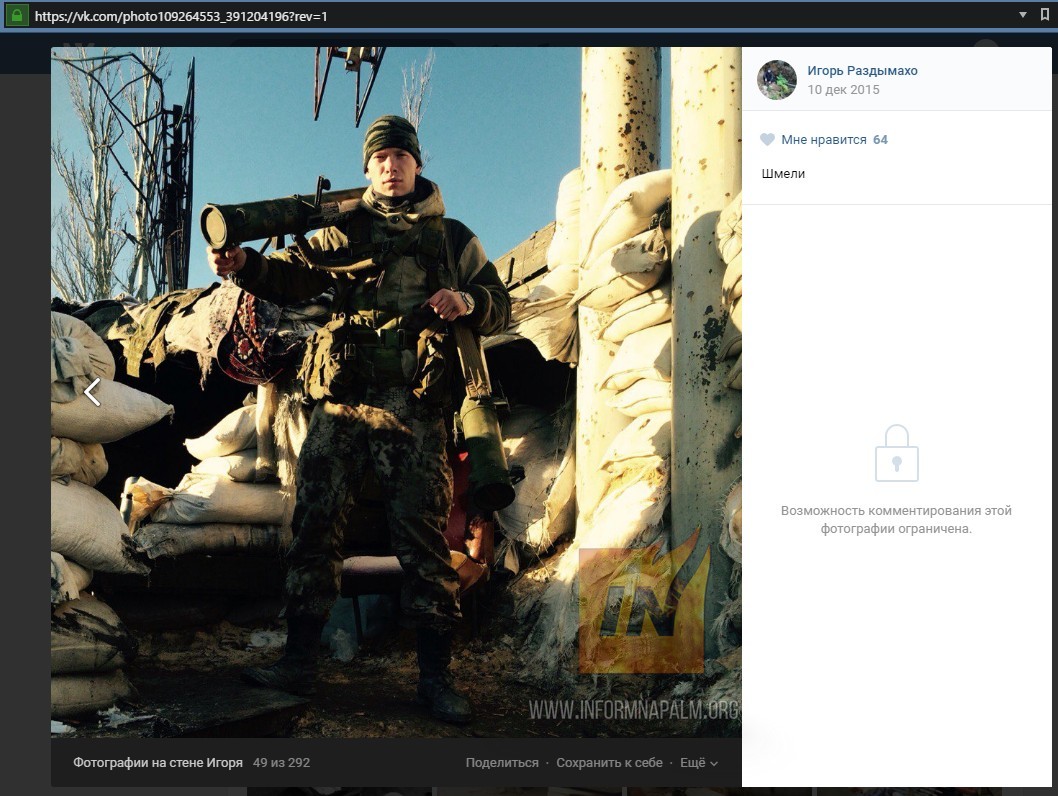 Here is a younger Razdymaho on the photos dated 2010-201, doing his conscript service. 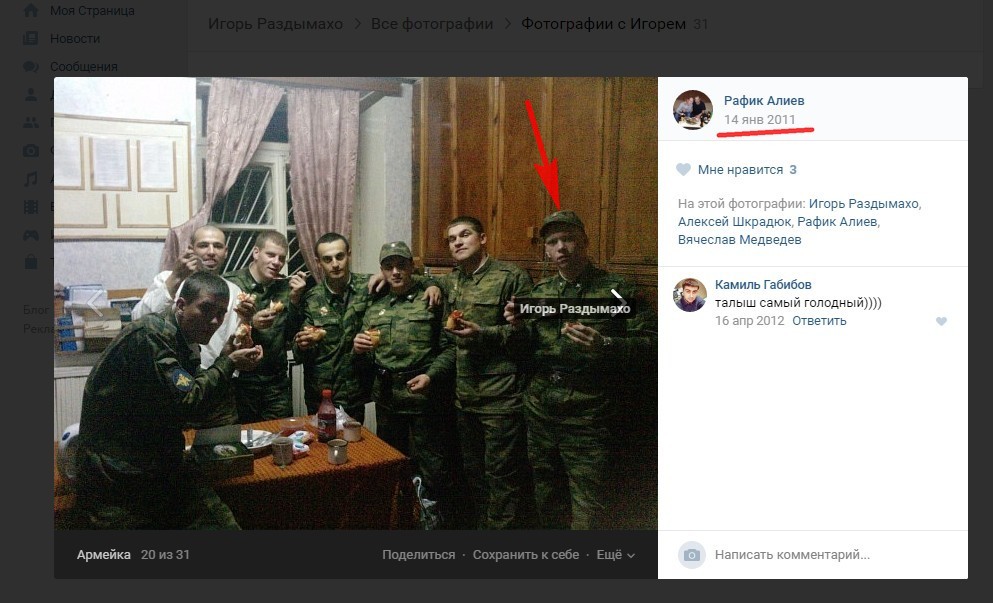 On the photo on OK dated 2013 a chevron of the Interior Troops of the Ministry of Internal Affairs of Russia is clearly visible, the force was transformed into the National Guard in 2016. 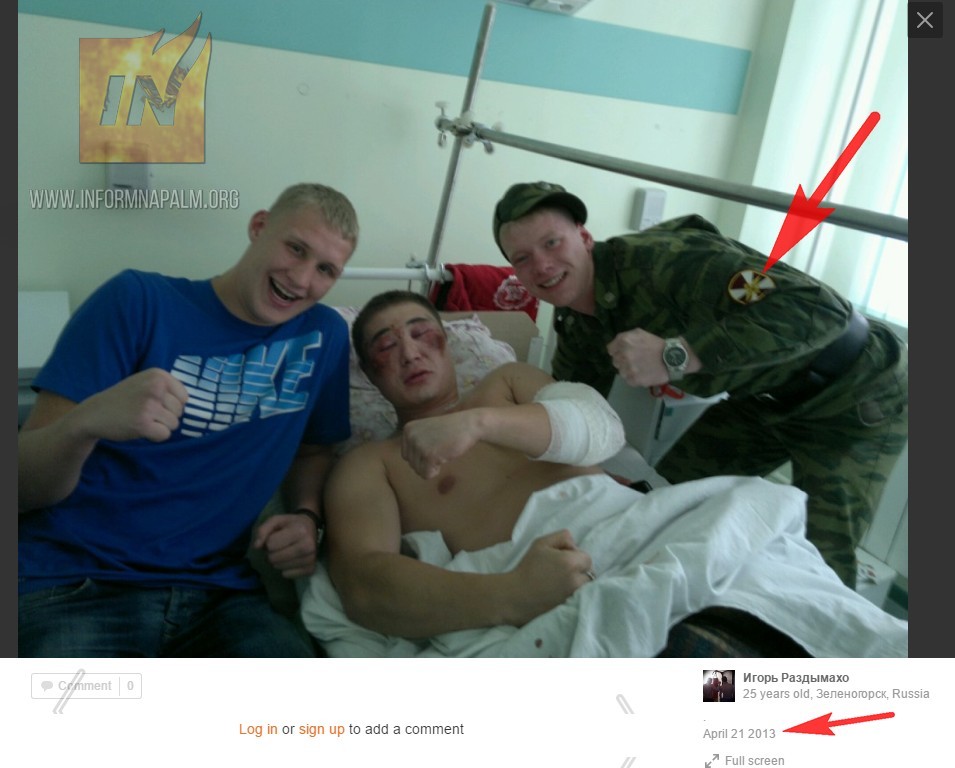 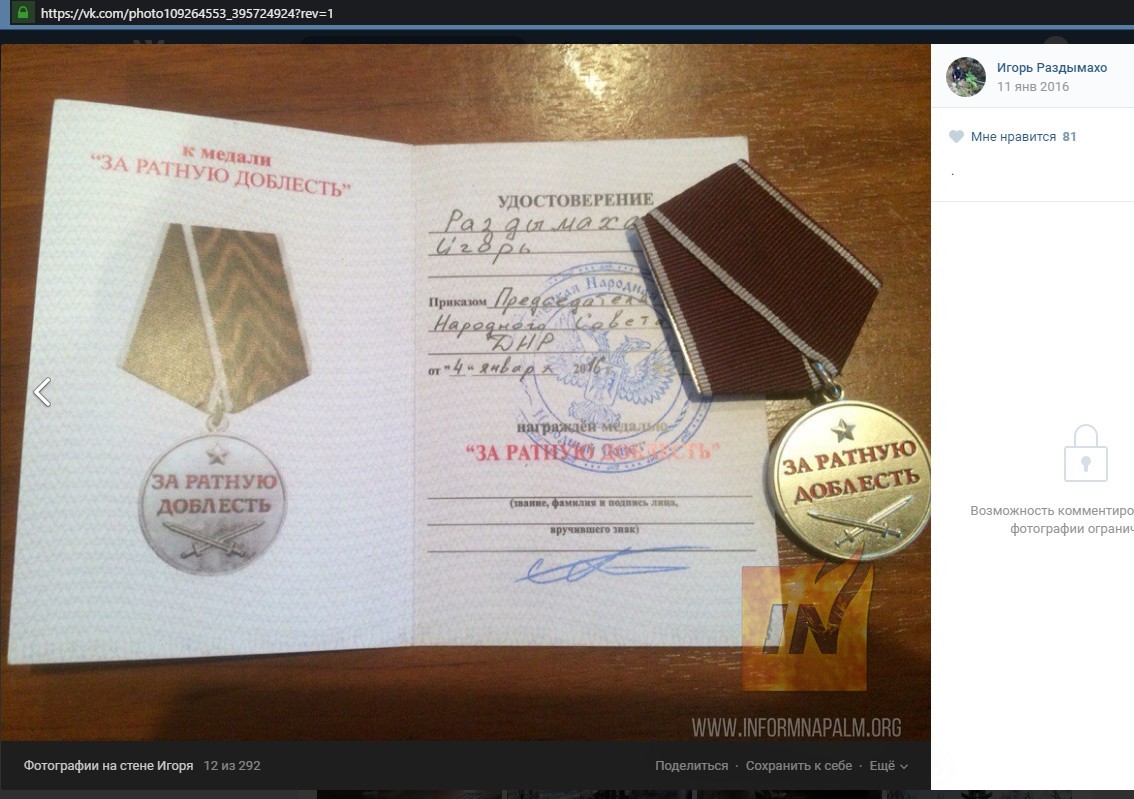 ID of 11th Motorized Rifle Regiment of Russian occupation forces issued by so called Ministry of Defense of the DPR. 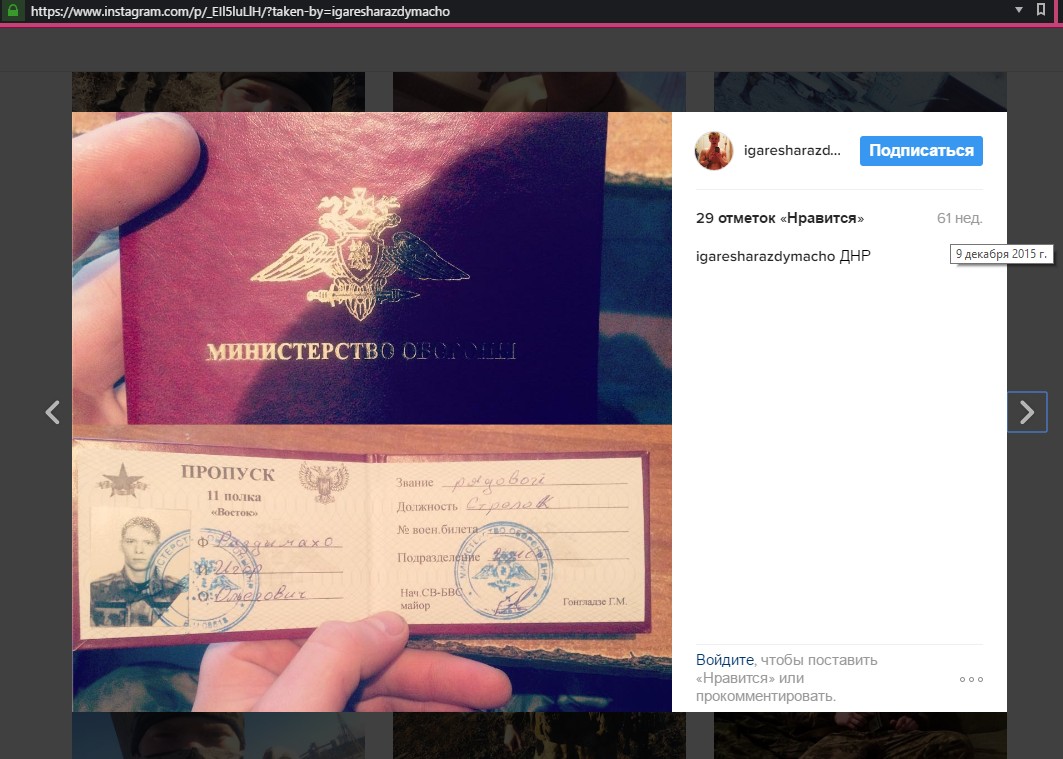 A gist lighter with his nickname/callsign “Rio”. 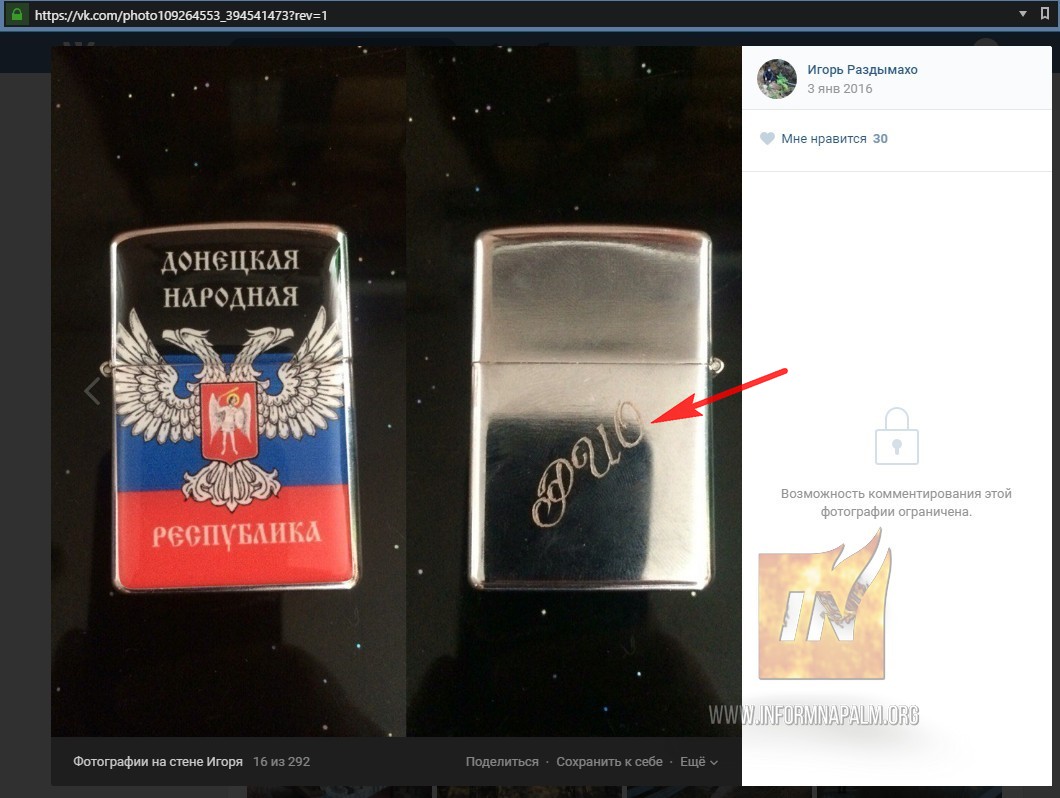 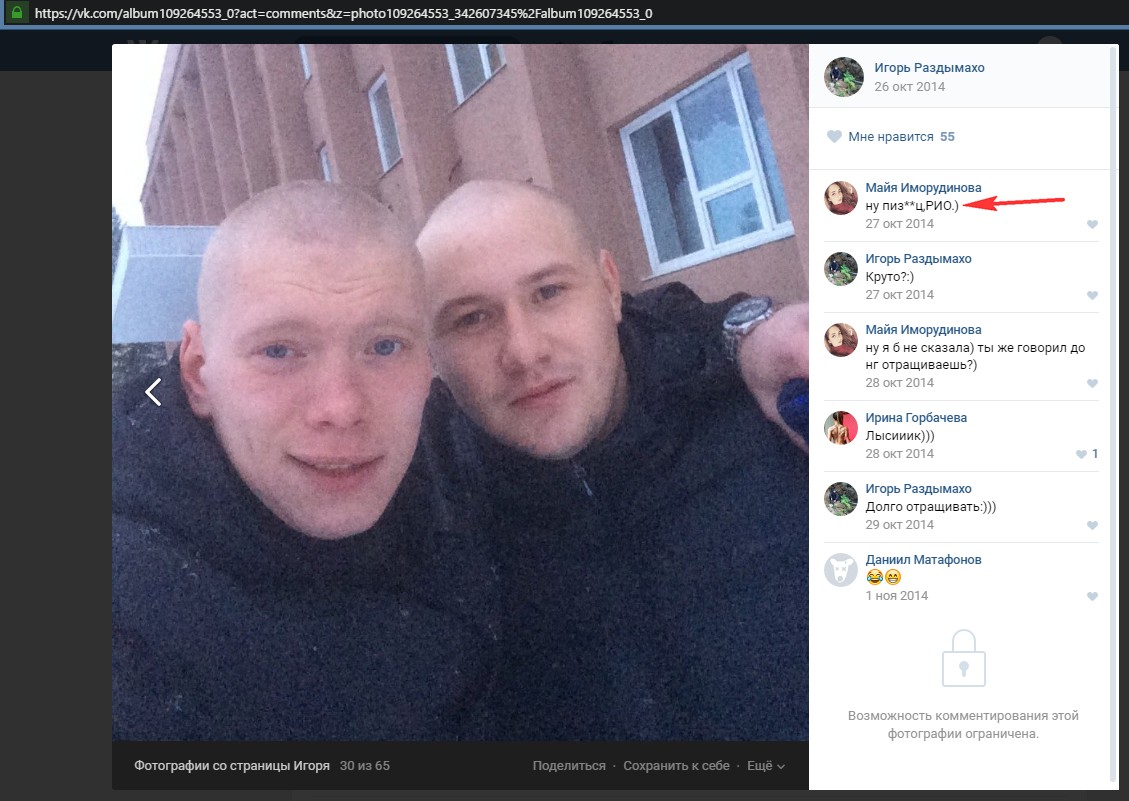 And of course, an indispensable selfie with the Tsar Cannon in Donetsk. 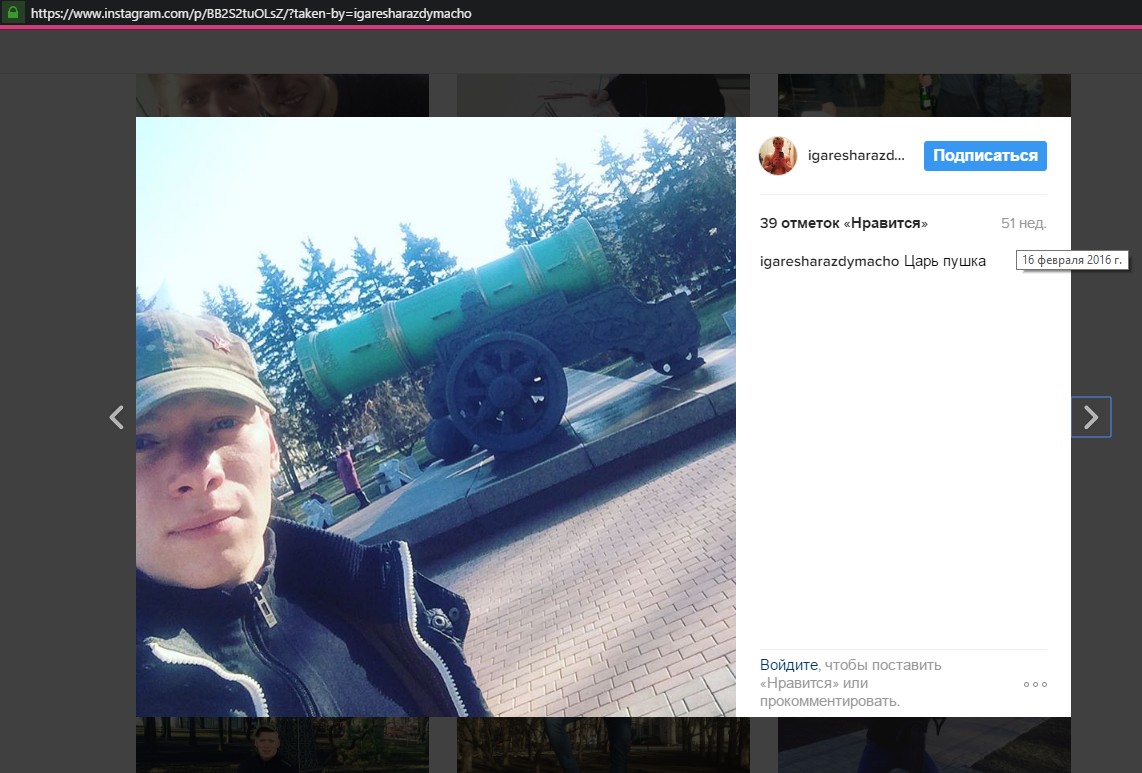 Together with the two National Guard soldiers mentioned above, we also found an “old school” Russian soldier (born in 1985) who most probably was sharing his experience with the youngsters. 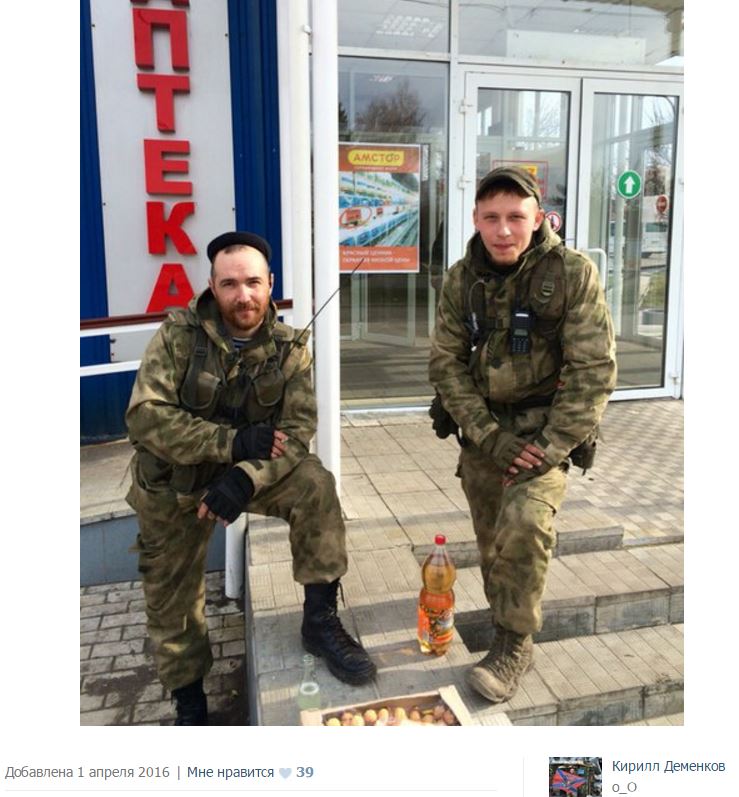 Vitaliy Alekseevich Rodionov, a professional military man. Sniper. Received training in the Terskol Mountain Training and Survival Center of the Russian Ministry of Defense in December 2014. Nowadays he shares his experience with younger generation while taking part in fighting in Ukrainian Donbas. 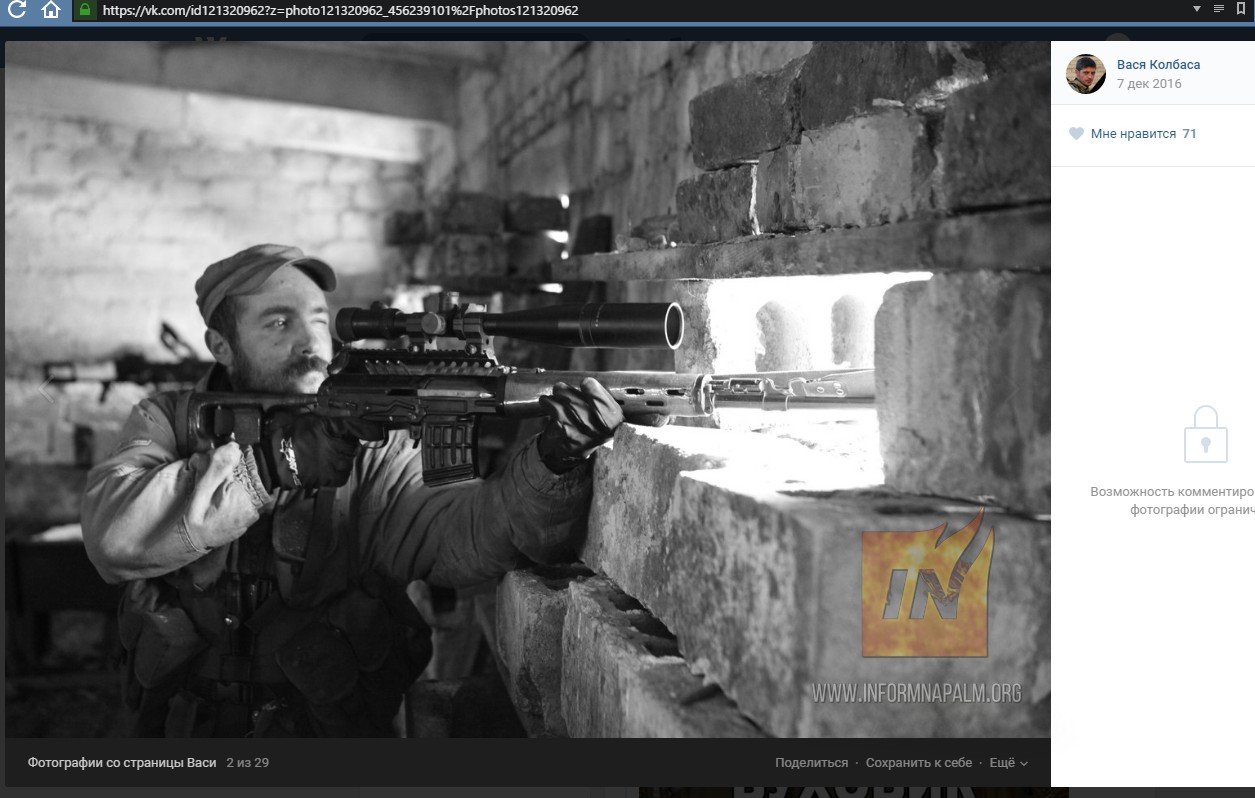 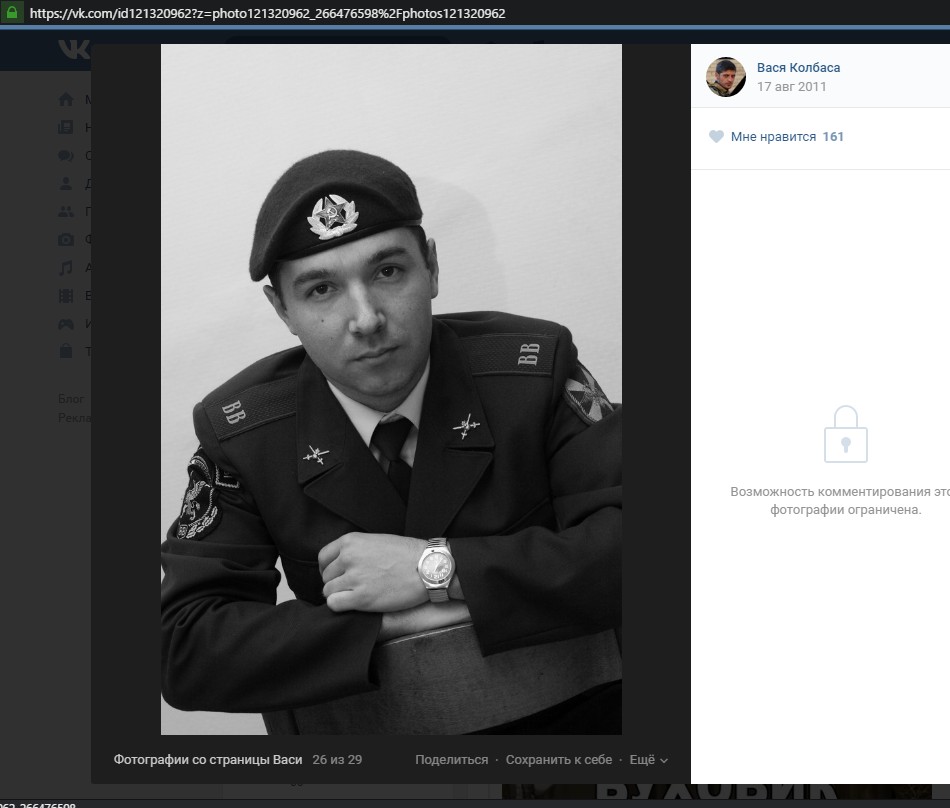 (CC BY) An active link to the authors and our project InformNapalm.org is obligatory for any reprint or further use of the material.

2 Responses to “Russian Guards: baptism of fire in the industrial zone of Avdiivka”