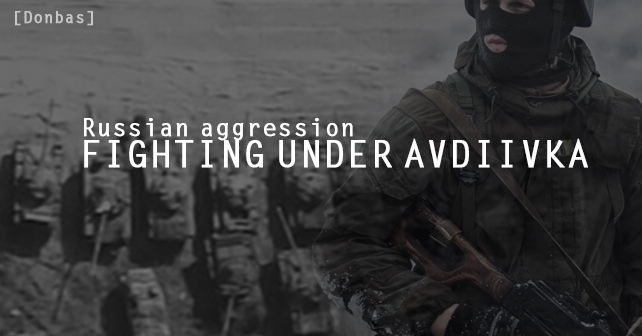 On January 30, the press center of the Anti-Terror Operation (ATO) said that the situation near Avdiivka, in the area of Donetsk remains tense:

“In the morning, the enemy continued shelling with the use of tanks and artillery. The attack on the positions of the Armed Forces of Ukraine was launched from the village of Yakovlivka and Spartak district. Around 10.30 the heavy artillery fire has stopped…”
By the morning of January 30, there were reports of 9 wounded Ukrainian soldiers. Also four servicemen were killed in action: captain Andrii Kyzylo (born 1993); sergeant Volodymyr Balchenko (born 1992); soldier Dmytro Overchenko (born 1989); sergeant Volodymyr Kryzhanskyi (born 1982).

It is known that on the side of the Russian hybrid forces, so-called 100th Brigade of Donetsk People’s Republic (DPR) was involved in the attack. In November 2016, InformNapalm volunteer intelligence community identified Captain Vladimir Vakhrushev, a professional officer of the 28th Brigade of Nuclear, Chemical and Biological Defense (NBC) (military unit 65363, Kamyshyn, Volgograd Oblast, Southern Military District of the Russian Armed Forces) who was posted together with other officers to this unit of Russian occupation forces in Donbas.

Through the leader of Vostok terrorist battalion Alexander Khodakovsky, the information about the death of Ivan Balakay (call sign Grek), the commander of the 1st Battalion of the 100th Brigade of the DPR leaked to the media. According to the Chief Directorate of Intelligence of the Ministry of Defense of Ukraine the losses of Russian occupation forces in the attack of 29-30 January 2017 were as follows:

It is worth noting that the attack of the Russian hybrid forces with the use of tanks and heavy artillery has been made possible by gross violation of the Minsk agreements provisions on heavy weapons pullback. Based on the attack sites reported by the ATO press center, we found one of the possible hidden bases of the tanks and artillery in close proximity to the specified area.

Presumably, Russian tanks were deployed from the base 14 km south of the area of Yakovlivka and Spartak, from where the attack was subsequently launched. 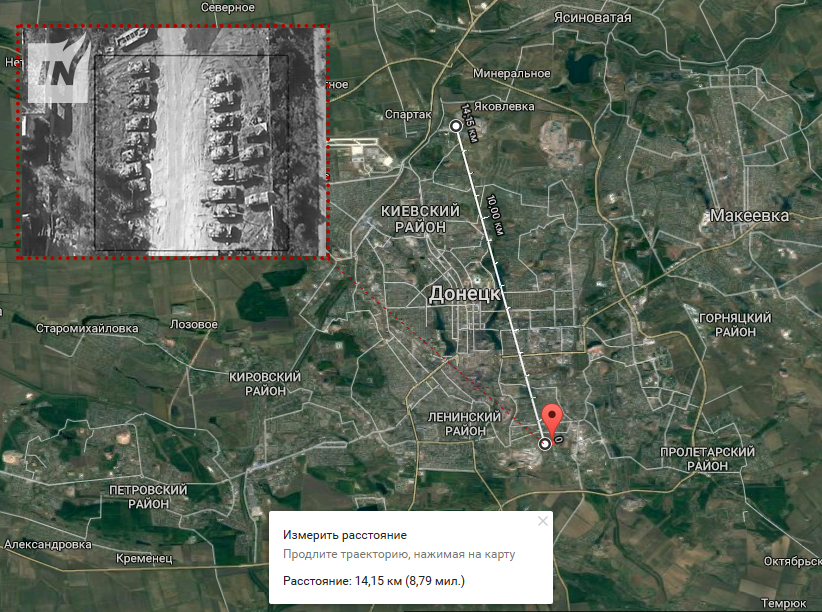 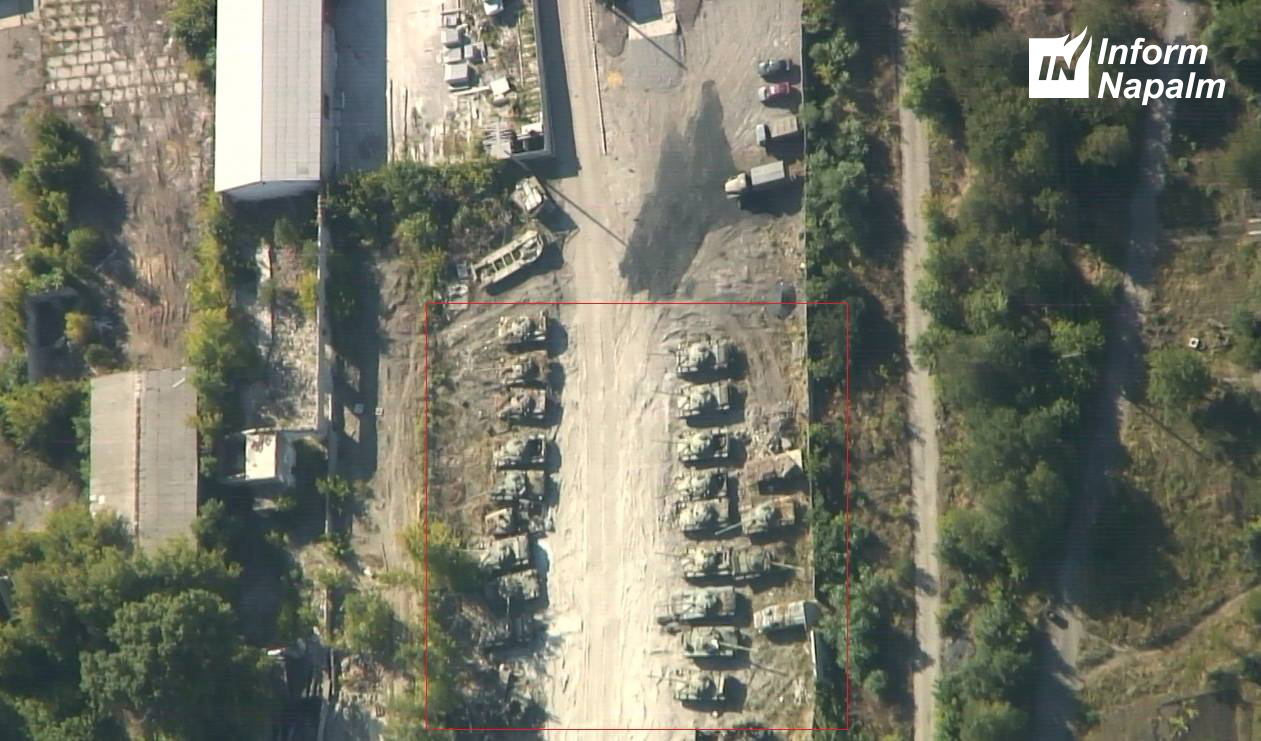 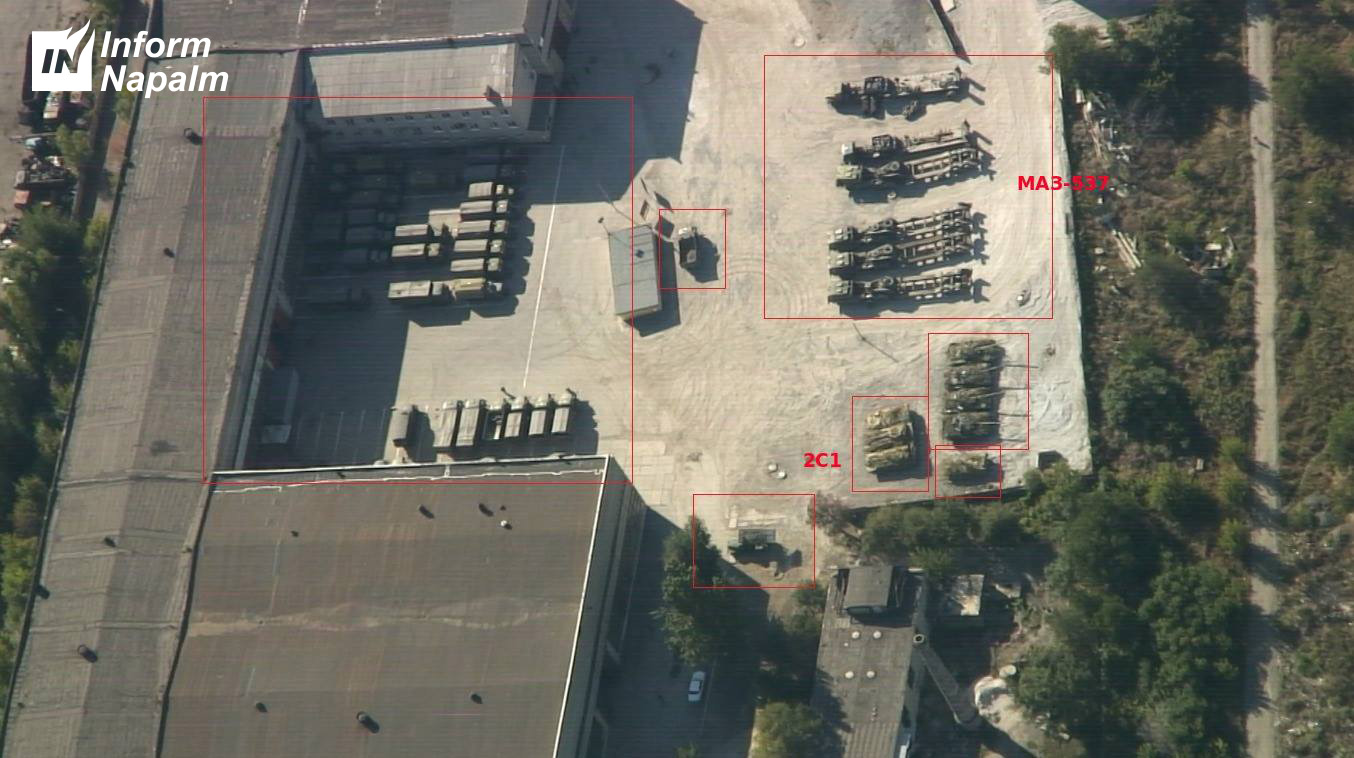 This evidence of gross violation of the arms pullback conditions (no artillery with the caliber over 100 mm within the 25 km zone) was presented to the international community but failed to produce sufficient pressure on Russia for enforcing the Minsk agreements. This became another example of how selective and soft stance of the international bodies emboldens Russia and enables further aggression.

Winter is traditionally a period of hostilities escalation. And Russian hybrid forces again recklessly use the prohibited types of weapons, causing both military and civilian casualties.

Now the weapons which have not been pulled back are actively used for attacks by the Russian hybrid forces with a short move from the nearby storage bases to the prepared positions.

One Response to “Avdiivka shelled by tanks and artillery: aerial photos of heavy weapons build-up”