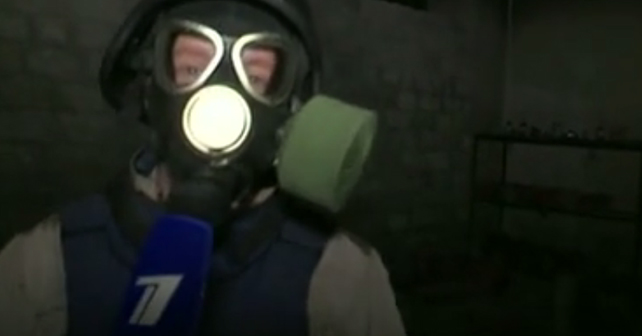 Volunteers of InformNapalm intelligence community have noticed an information campaign in Russian media regarding the “chemical weapons in Syria”.  In this article, we provide an analysis of false-flag reports on Russian TV, and reasons for the Kremlin to push for an urgent wave of misleading content.

The starting point of this investigation is a news story published on November 11, 2016 on the official website of Zvezda, the media company of the Russian Armed Forces.

“The official representative of the Ministry of Defense, Major General Igor Konashenkov, said that the Research Center of the Chemical, Biological and Radiological (CBR) Defense Troops of the Russian Armed Forces has information on traces of chemical weapons deployment detected on the south-western edge of Aleppo, in the sector 1070. The weapons, in particular ammunition with chlorine and white phosphorus, were used by the illegal ISIS terrorist group” (source archive).

This passage spread by the Russian Army channel about “ISIS ammo with chlorine and white phosphorus in the vicinity of Aleppo” is materially misleading. This terrorist group does not control Aleppo and its outskirts, the south-western part of the city is under control of anti-government coalition forces, which Zvezda brands as ISIS. The rest of the city and its outskirts are controlled by the governmental forces.

Konashenkov’s claim is not supported with any kind of valid proof.

By the morning of November 14, Russians continued to spin the subject of “chemical weapons held by rebels” through the Shia TV channel called Al Mayadeen.  The channel was founded by notorious former chief of Al Jazeera in Beirut Ghassan Ben Jeddo who has shown special lenience toward Russia on multiple occasions. He often claims that “Russia’s role in the modern world is to balance the structure of values“.  There are reasons to believe that Al Mayadeen TV promotes the interests of Iran and Hezbollah.

On November 14, the channel reported about the use of chemical weapons by the rebels, citing the command of the Syrian Arab Army. The publication claims that the attack took place in the al-Nairab area, that “gaseous chlorine was used” and that 28 servicemen of the Syrian government forces were affected by the attack”.  No evidence was provided to support these claims.

By the following morning, Russian media “located” the production facility for the “chemical weapons”, and even managed to shoot a video at the site. Zvezda, the media outlet of the Russian Army, again was the first to air the news. As the working day progressed, other major Russian media picked up and shared the story.
Let’s take a closer look at the footage and the commentary provided by the Kremlin journos.

It looked to us highly unlikely that chemical ammunition could be produced by workers in dust masks without any special equipment.  Further, it was unclear how a conventional high-explosive projectile with explosive core melted out could be converted to deliver and release toxic substance. We addressed three experts in chemical weapons for commentary.  All of them share the opinion that the story presented by the Russian media is most likely a fake.  Here are several basic reasons for this conclusion:

Moreover, chlorine is an extremely aggressive substance. Under low humidity it stores well in metal containers, but with any presence of moisture it forms an acid which causes rapid metal corrosion.

We could identify some of the polypropylene bags appearing in all the video footage. 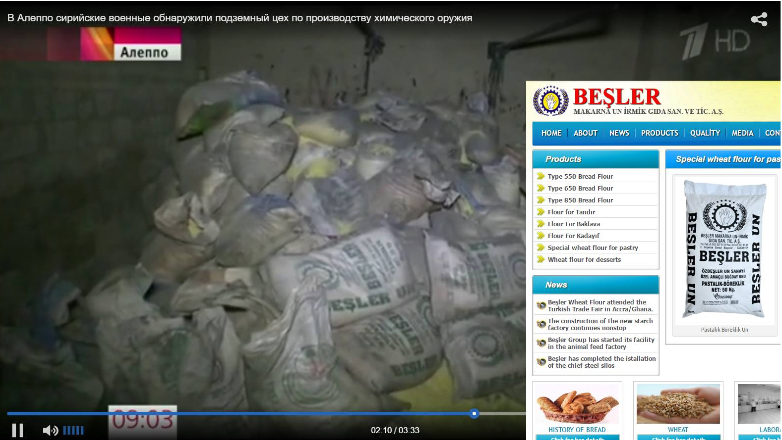 They bear details of a company producing grains and pasta. What is the purpose for the bags to be positioned clearly showing the marking? Either the stage managers did not care so much about the details, or maybe they had an intention, at a convenient opportunity, to point the finger at Turkey for delivering chemical weapons disguised as humanitarian aid.

Sitting nearby, there is another kind of bag with cattle fodder produced in China. 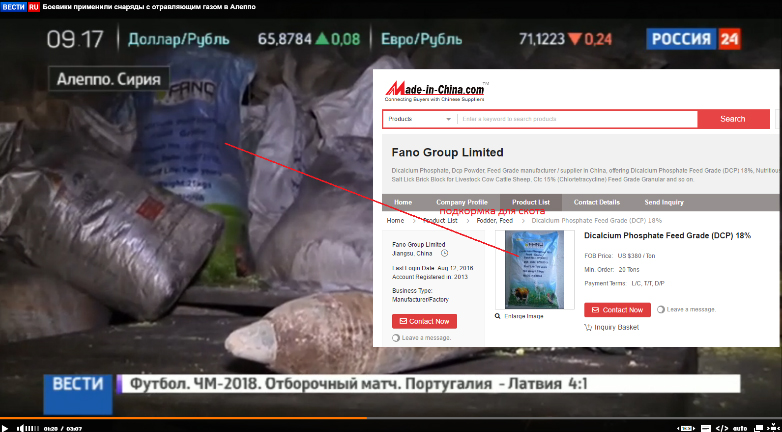 Apparently, the authors of the hoax shot it in an underground humanitarian aid storage, which was taken over by Shabiha, Assad’s armed militia. Shabiha could have had chlorine from Assad’s army. The FSA and other rebel groups in Aleppo do not have chlorine, neither do they have aircraft capable of “air-dropping chlorine barrels” (this tactic was discussed by Russian experts, suggesting the idea of rebels dropping chlorine bombs on Assad’s troops).

There is another interesting detail. Allegedly, the report was shot in the sector 1070, near the military school (south-western edge of Aleppo). This area has been in the zone of active combat for a long while, changing hands between different groups. It makes no sense placing a highly hazardous chemical production facility at the front line. 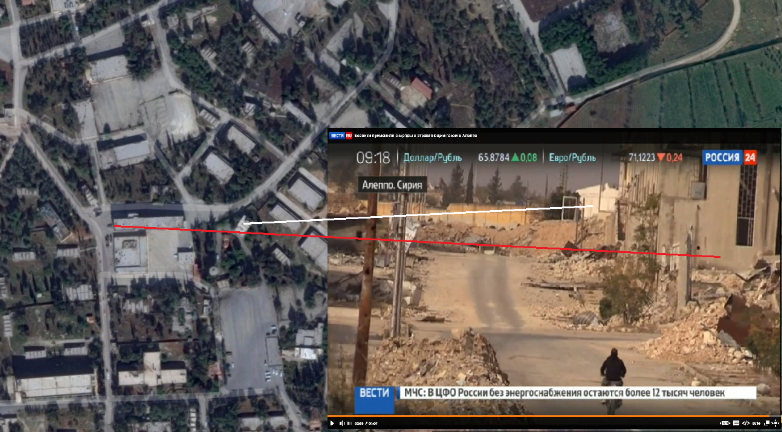 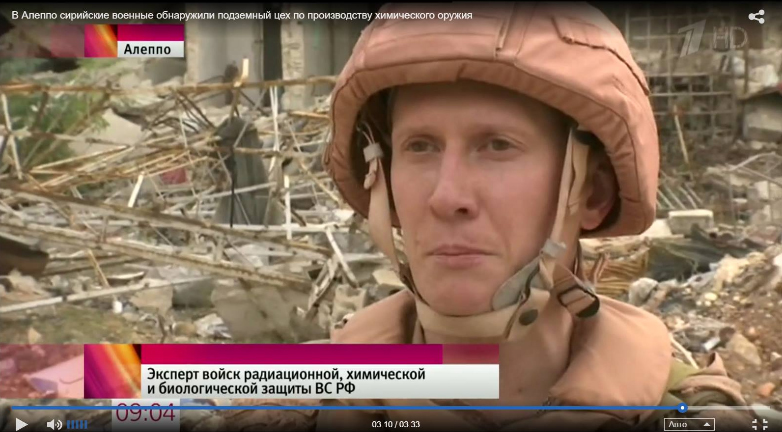 These “experts of the CBR defense troops” standing next to the old corroded unexploded mortar shell, claim with a straight face that it is a “chemical projectile dropped recently”. 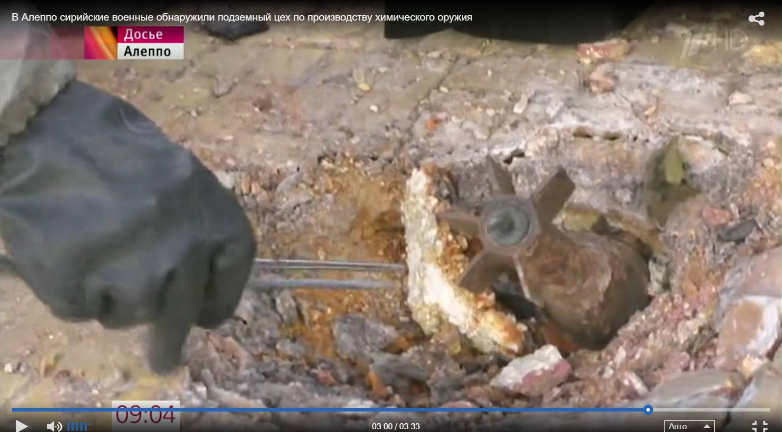 What may be the reason for this urgent news fabrication by the Russians? The clue may come from the comment by the Russian MFA of November 11 on Organization for the Prohibition of Chemical Weapons (OPCW) Executive Council’s decision on Syria.

It brings up the subject of one of our recent investigations on the secret cargo from Syria to Crimea that arrived at the Feodosia port in late October. It could mean that our assumption about evacuation of components for weapons of mass destruction from Syria to the occupied Crimea are true. And that Russia is busy covering up the traces and producing false-flag news reports in order to divert attention from the actual holders of chemical weapons.

This investigation was prepared by Dmytro K and Kateryna Yaresko for InformNapalm volunteer intelligence community. An active link to the authors and our project is obligatory for any reprint or further use of the material.