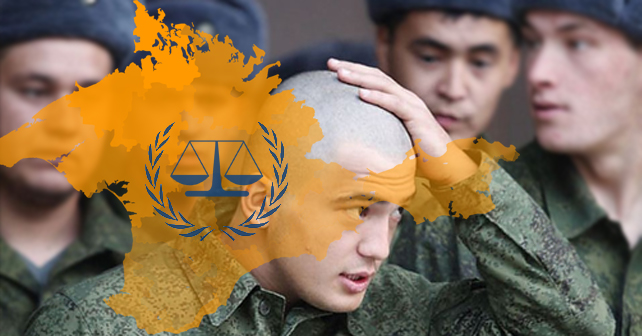 The Russian occupation authorities in the city of Sevastopol launched the autumn conscription campaign targeting to recruit about 400 city residents for service in the Russian army. According to the Russian Chief Enlistment Officer for Sevastopol, Alexei Astakhov, conscripts will be sent to serve not only to the military units located in the occupied Crimea, but also beyond: to the Krasnodar Territory, as well as Rostov, Moscow, and other regions of Russia.

Given the high degree of the Russian army involvement in numerous military conflicts, including in Ukraine and Syria, Sevastopol youth are actively discussing on local online message boards the possibility of evading military service, with many trolls trying to convince people to serve, arguing that without a military service card, they will have no career opportunities either in Crimea or in the Russian Federation.

“Drafting the residents of the occupied territories to the occupation army, as well as the continued propaganda on the Crimean territory of the service in the Russian Army, violate Art. 51 of the Geneva Convention Relative to the Protection of Civilian Persons in Time of War (Fourth Geneva Convention), while moving the conscripted citizens of Ukraine from the occupied territory to the territory of the Russian Federation violates Art. 49 of the Convention,” — human rights activists report.

Human rights activists remind that photos and videos, as well as scanned copies of military call-up papers for Crimea and Sevastopol should be made public in the media, including on the condition of anonymity, to stop the illegitimate conscription on the territory of the peninsula.

Read more: From Donbas to Syria: Commander of the 61st Brigade of Russian Northern Fleet drove into a land mine

It is worth reminding that in the recent years, young conscripts have been wary of the prospects of serving in the Russian army not only because of the risk of being assigned to war zones, but also due to the brutal hazing at the hands of the Caucasian and the Tuvinian communities, which intensified with the appointment of an ethnic Tuvinian, Sergei Kuzhuget-oglu (aka Sergei Kuzhugetovich Shoigu), to the post of the Russian Defense Minister.

Cases of strange deaths of conscripts in Crimea itself have also increased. For instance, in late August, Altapress.ru, regional media outlet of the Russian Altai Territory, reported that Valery Kovalchuk, 19-year-old conscript from Altai, died under strange circumstances in the Crimean village of Krasnokamenskiy. The command of the Russian military unit #6915 of the National Guard of Russia concealed the fact of his death from the serviceman’s parents for a long time, even trying to declare him a deserter.

This publication was prepared specially for InformNapalm.
An active link to the authors and our project is obligatory for any reprint or further public use of the material.
(Creative Commons — Attribution 4.0 International — CC BY 4.0)
Repost and share with friends.
For notifications about InformNapalm investigations follow us on Facebook / Twitter / Telegram.