Derkach tapes as part of Russian hybrid war against Ukraine 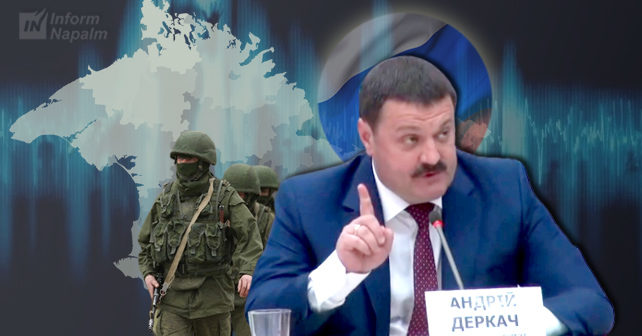 The Secretary of the National Security and Defense Council of Ukraine Oleksiy Danilov called the audio recordings of the conversations made public by the Ukrainian lawmaker Andriy Derkach, part of the Russian information war.

The new audio recordings that Andriy Derkach presented at a press conference on July 9, 2020 as a conversation between the fifth Ukrainian president Petro Poroshenko and former US vice president Joe Biden, contained a discussion about  sabotage operations against Russian occupation forces, allegedly prepared by Ukrainian intelligence services in Crimea in August 2016.

On the tapes, a voice presented as the voice of Joe Biden, criticizes an alleged attempt of the Ukrainian intelligence services to carry out a sabotage operation against the Russian invaders in Crimea and demands that the Ukrainian side do not repeat this, as it does not contribute to a diplomatic solution of the conflict. In response, a voice presented as the voice of Petro Poroshenko, states that he was not aware of the operation, and promises to conduct an internal investigation.

Earlier, Petro Poroshenko himself called the “Derkach tapes” fabricated and part of a large-scale special operation of the fifth column of the Kremlin against Ukraine: “By pulling us into the US election campaign, they are trying to undermine the bipartisan support of Ukraine.”

Biden campaign also reacted to the Derkach tapes, calling them “heavily edited” They view the publication of such recordings a continuation of the efforts of the Russian intelligence services to undermine the former vice president.

Read more: How disinformation about Ukraine spread through social networks in the USA (translation of a NBC News study)

Faking any voice is a trivial technical task nowadays. Two years ago, programmers launched an open source software, which requires mere five seconds of input voice record for voice mimicking. The authors of the voice generator program published examples of its output. The result is really amazing: a synthesized voice is almost indistinguishable from a real one.

It is still unknown whether the Derkach tapes are fully fabricated or are bits of real conversations presented in a manipulative way. According to Andriy Derkach himself, he received the tapes from “investigative journalists.” However, experts note that usually “investigative journalists” publish their sensational materials themselves, and do not pass them on to lawmakers to present at press conferences. Russian Federal Security Service (FSB) is considered one of the most plausible sources of the Derkach tapes.

The biography, of Andriy Derkach strongly suggests his possible connection to the Russian intelligence services. Thus, from 1990 to 1993, he attended the Academy of Russian FSB, where he received a law degree. The topic of his thesis is no less interesting: “Organization and conduct of meetings with secret agents.” Andriy Derkach first got into the third Ukrainian parliament in 1998 running as an independent in a single-mandate constituency. In 2010, the Holy Synod of Russian Orthodox Church inducted Derkach into the Inter-Council Presence of Russian Orthodox Church. Obtaining religious privileges from the Russian church in Ukraine was a popular tribute to politicians closely associated with Russia.

Read more about various aspects of the subversive activities of Russian church in Ukraine in our FrolovLeaks series, where informNapalm volunteers analyze the e-mail dumps of Kirill Frolov, who worked as the head of the department at the Institute of CIS Countries (under State Duma member Konstantin Zatulin).

Pre-assault media bombardment on the eve of aggression

The likelihood of an escalation of hostilities and large-scale Russian military aggression against Ukraine in the fall of 2020 has also been more actively discussed in the media in the recent months. One of the signs of the preparation of such an escalation will be powerful cyber-attacks and disinformation campaigns, said former commander of the US Armed Forces in Europe, Lieutenant General (ret.) Ben Hodges in his recent interview. In early July, Ukraine handed over to the OSCE intelligence about the significant buildup of the Russian troops at the borders of Ukraine and in the occupied territories in Crimea and the Donbas. InformNapalm volunteers also provided an analysis of two scenarios for the possible involvement of the Russian troops in military operations against Ukraine in the southern and north-eastern areas.

Read and share more on this topic from InformNapalm