EgorovaLeaks: Filtering and Control of Foreign Journalists in DPR 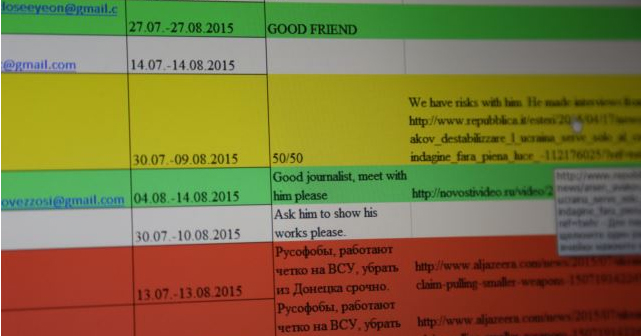 The international volunteer community InformNapalm presents on its platform its own OSINT investigation materials and translations, as well as interesting materials of our colleagues and partners within the #EgorovaLeaks topic. This includes analysis of the leaked mail dump of a Donetsk Peoples’ Republic (DPR) media official discussing recruitment, as well as coordination of activities of foreign journalists. This investigation was prepared by  Mark Krutov, an information service editor at “Radio Liberty”  with the assistance of InformNapalm.

“Russophobe, get him out of Donetsk!”

E-mail archive of an employee of the “DPR Ministry of Information” Tatiana Egorova was leaked on the web. It contains materials shedding light on the process of filtration of the journalists admitted to work on the territory of “the people’s republic”. A whole system under Moscow’s control was developed in August 2015. Now its founders are requesting funding from the leadership of DPR to continue the operation directly on the separatist-controlled territory. Yegorova’s letters also contain some other interesting documents – such as how a Ukrainian journalist was sent “to the dungeons” for possessing “Yarosh business card”.

In June 2015, Russian journalist of Novaya Gazeta Pavel Kanygin was arrested in Donetsk, beaten and deported from the territory of the self-proclaimed DPR. Later Kanygin explained how shortly before he unsuccessfully tried to obtain accreditation for the work in the DPR from Tatyana Yegorova, an employee of so-called Ministry of Information. On August 3, 2016, a year and two months after the incident with Kanygin’s beating and expulsion, Egorova published this tweet on her Twitter account saying “I, Egorova Tatyana Sergeevna, an employee of the Ministry of State Security of DPR (DPR MSS) cannot lie anymore and will not let others either”: 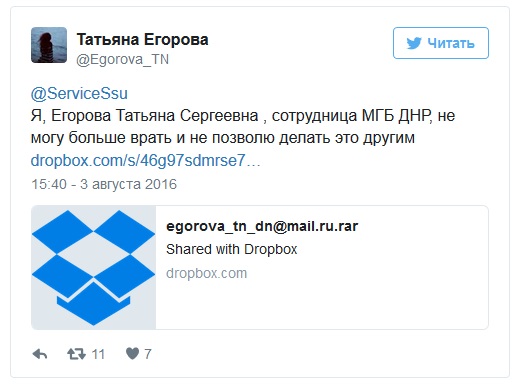 The file (the Twitter link it is not active any more, but the activists of the international community InformNapalm provided a copy to the Radio Liberty – RS) contains Egorova’s e-mails from 2015-2016. Most likely Egorova’s twitter account and mailbox were hacked. Letters that unknown hackers have published and handed to Ukrainian media, contain evidence of existence of a whole filtering system for the journalists, whom the DPR authorities have allowed or prohibited to cover the events in the “People’s Republic”. In particular, the correspondence contains a spreadsheet entirely focused on the employees of foreign newspapers and TV channels.

This is not the first hacking of the employees of so-called Ministry of Information of the DPR. Ukrainian Myrotvorets website , which documents the combatants of DPR and LPR or their collaborators based on their data on social networks, published this spring the lists of journalists accredited to the DPR. This publication caused uproar among the persons named in the list and a wave of heated discussions on social networks.  Founders of Myrotvorets announced its closure under the unprecedented pressure from the media community and state authorities of Ukraine, but then changed their mind.

The publication on Myrotvorets website was intended to discredit the journalists who did not shrink from working in Donetsk with an “official accreditation” from the DPR. Receiving this accreditation – not only for the journalists of Russian opposition newspapers, such as the Novaya Gazeta, but also for foreign reporters is no mean feat, as long as they do not represent any radical left- or right-wing European media sympathetic to separatists.

DPR sympathizers are marked green in that file from Egorova’s letters. For example, the name of German photographer and journalist Mirko Moebius (pseudonym – Mark Bartolomay) is in green, he is openly sympathetic to separatists and even shot a film with an explicit title Ukrainian Agony. “GOOD FRIEND” is written in capitals in the column next to his name:

However, people like Mirko are the minority in the database. Most of the table is colored red and yellow. Red is for the journalists, who are not to be permitted on the territory of the DPR. If they were already there, they need to be “removed immediately”. Yellow is for the ones whose relevance of the permit to work in the DPR is questionable.

Wordings are harsh and clear: “Russophobes, work clearly for the Armed Forces of Ukraine, to be expelled from Donetsk immediately”, “Works for the Armed Forces of Ukraine and the ATO, immediately expel from Donetsk”, “Works for Ukrainian media”. The cell next to the name of an Associated Press reporter contains a little bit more detailed comment: “NATO’s propagandist. Very competent. Reuters and AP – main ideological enemies of Russia in the information war.” Next column contains relevant links confirming this opinion.

At the same time the separatists are willing to “experiment” with a permit for the journalists of the Australian ABC channel, although they call this channel “russophobic”:

In some cases cells next to names (as in the photo above) contain phrases like “request to show articles”. In other cases there is a label “some risk”, like for the reporter of the Italian La Repubblica newspaper.  There is also an explanation in his case: “the journalist requesting accreditation interviewed Arsen Avakov, the Minister of Internal Affairs of Ukraine”. Among the well-known Western journalists strictly forbidden to appear in Donetsk, are Oliver Carroll (at that time – an employee of the British The Independent), Roland Oliphant (Daily Telegraph), Anna Nemtsova (The Daily Beast). All of them were reporting many times from Donetsk right from the beginning of “Russian Spring” in 2014, when first administrative buildings were captured by the supporters of separation of Donetsk and Luhansk regions from Ukraine. Representatives of such media companies as Reuters, BBC, Al Jazeera are also on the black list.

As follows from another letter found in the mail dump, all this is the product of the “System for monitoring of media and journalists in the DPR”. The System was based in Moscow at the English speaking “DONi Information Agency” (Donbas International News Agency). The System was launched in August 2015, an it looks like now the leadership of DPR refuses to continue funding its operation.

In a letter from July 5, 2016, the director of the agency, Finnish journalist Janus Putkonen (Russian media call him “Western journalist-enthusiast, trying to break the information’s blockade around the DPR and LPR) wrote to Egorova (putting in copy “DPR Ministry of Sate Security” and “DPR Administration”):

“We have to inform the National Security Service of DPR, public administration and press center of the Donetsk People’s Republic, that the Information Security System, managed by DONi, the News of Donbas Agency, which used to provide reliable services for the accreditation of foreign journalists, is closed and in standby mode since 1.7.2016. The reason to suspend the System’s services was a long-term uncertainty about the continuation of the activities of our news agency and the International Press Center of DONi. For several months, DONi Group was expecting a confirmation of the official support and the actual decision to continue public partnership as the official channel of the DPR media. Aleksandr Zakharchenko, the Head of the People’s Republic is responsible to make the necessary decisions.”

Putkonen reports on the work done and makes a case to prove the indispensability of the “System” for the separatists leadership:

«DONi’s System served for the Donetsk People’s Republic since its founding in August 2015, and aimed to work in cooperation with DPR senior officials. The accuracy of the proposals for the issuance of accreditations from the system has been very reliable with no errors, failures or leaks while serving the DPR interests. DONi has never been accused of providing the dignitaries of the DPR any false, biased or unfounded information about accreditation. All requests for information were granted in a few hours or at most within a day.”

The paragraph on the collaboration with the “right” and “correct” journalists and the media:

“Almost every day, objective proposals were put forward for possible cooperation with foreign media and journalists in close cooperation with the Ministry of State Security, Ministry of Defense, the Donetsk press center, as well as with the administration or other DPR ministries, as well as individual officials. All the information processed through the System is a matter of state security and is classified top secret. Track records of some foreign journalists have also been studied in the framework of direct military needs of the DPR.”

Putkonen concludes by asking for money, adding that DONi Agency is ready to move from Moscow to Donetsk and slash expenses:

“The conditions necessary to continue the work:

The letters from Egorova’s mailbox suggest, that the financing of a filtration system for foreign journalists was carried out with a personal approval of the DPR leader Alexander Zakharchenko.

Leaked correspondence of Tatiana Egorova contains thousands of letters dedicated not only to the accreditation of the journalists. They also discuss assistance in getting of the foreign “activists” supporting the “people’s republic” to the DPR territory. The letters contain dozens of passport copies of citizens of Italy, France, Finland and other countries, and a discussion of how to best organize their visit to the DPR (usually via Russian territory, by bus from Moscow). Still, most of the letters concern media work.

Another letter explains how the Ukrainian journalist and blogger Nazariy Nadzhogu was detained at the filtration point of the DPR MSS because of “Yarosh business card” found in his laptop bag. This phrase in the spring 2014, became an internet meme mocking the scare mongering of the Russian media (Dmytro Yarosh was the leader of Pravyi Sector or “the Right Sector, an organization banned in Russia, read more on the meme here: http://knowyourmeme.com/memes/events/yaroshs-business-card  – RS, AG). Since then, the production of souvenir “Yarosh cards” became massive, magnets could be purchased at any souvenir shop in Kyiv. It is difficult to establish whether a souvenir of this kind was in the bag of the Ukrainian journalist detained at the DPR checkpoint, but such a small thing caused him serious trouble.

“In the morning of May 10, 2015 during the inspection of personal belongings of N. M. Nadzhogi, the border guards of the DPR MSS found in the pocket of his laptop bag a business card in the name of Yarosh Dmytro, the leader of an informal right-wing extremist group Right Sector with the numbers of the regional cell of the organization in the city of Ternopil. The said person was detained and taken to the DPR MSS filtration point in the city of Donetsk.”

This story ended luckily for Nadzhogi. From the letter, it follows that “psychological contact has been established” with him, it was recommended to grant him accreditation, but keep him under close control.

However, publication of #EgorovaLeaks triggered in Ukraine more discussing of Inter TV channel, rather than problems of foreign reporters. In one of the letters certain Leonid Muravyev offers excuses to Egorova for the word “terrorists” used in one of the reports by Inter’s journalist Roman Bochkala describing the separatists. Mravyev assures her that Bochkala was “terribly punished” for that word. Bochkala himself already said that channel management did not discipline him in any way, and recalled that at some point a man with the last name “Muravyev” did show up on “Inter”. Bochkala hinted that he could have been a curator from Russian intelligence agencies who attempted to infiltrate the channel under the guise of a trainee. Muravyev featured in Ukrainian media space as the mysterious “editor” in one of the Inter shows, but in March of 2015 the management of this TV channel denied this information. Officially it is known only that the same spring Leonid Muravyev was deported from Ukraine by state security service for “preparation of propaganda materials about the conflict in Donbas” and got an entry ban for Ukraine for the next 5 years.

2 Responses to “EgorovaLeaks: Filtering and Control of Foreign Journalists in DPR”