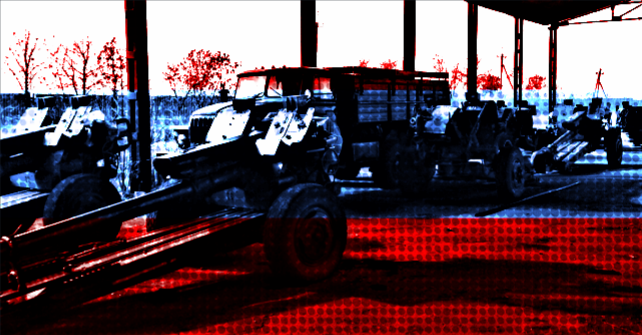 The artillery and drone systems of the so-called 5th Oplot Motorized Rifle Brigade (MRB), military unit 08805, have never been in service with the Armed Forces of Ukraine, reports the Ministry of Defense. InformNapalm received this reply from the ministry to our official request # 356-2-619 of September 15, 2017. 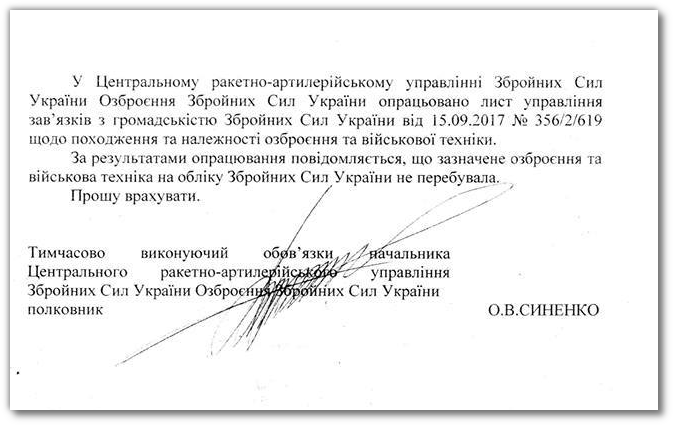 In August 2017, we published an article analyzing e-mail dump belonging to a Russian Army officer in command of the artillery of the Russian occupation forces in Donetsk (so-called 1st Army Corps of the Donetsk People’s Republic (DPR)). The dump was handed over to us by the hacktivists of Ukrainian Cyber Alliance (UCA) and CyberHunta. Read more: Artillery officer of the 1st Army Corps under UCA surveillance. Part 1. The dump contained photos with serial numbers of the military equipment. Using this evidence, we submitted a request to the Ministry of Defense of Ukraine about the equipment bearing these serial numbers.

We received the answer from the Central Artillery Administration of the Ukrainian Armed Forces. It disproves the claims by the Russian military leadership about the origin of military equipment operated by two fully equipped army corps (AC) of the hybrid forces in Donbas, which was allegedly captured during fighting, found mothballed in the mines, or somehow purchased.

Read more in our previous article identifying the personnel strength and listing some of the equipment of the 1st MRB of the Russian hybrid forces: Retrieved: complete personnel and armaments data of so-called 1st Motorized Rifle Brigade self-propelled artillery battalion. These howitzers have never been in service with the Ukrainian Army. 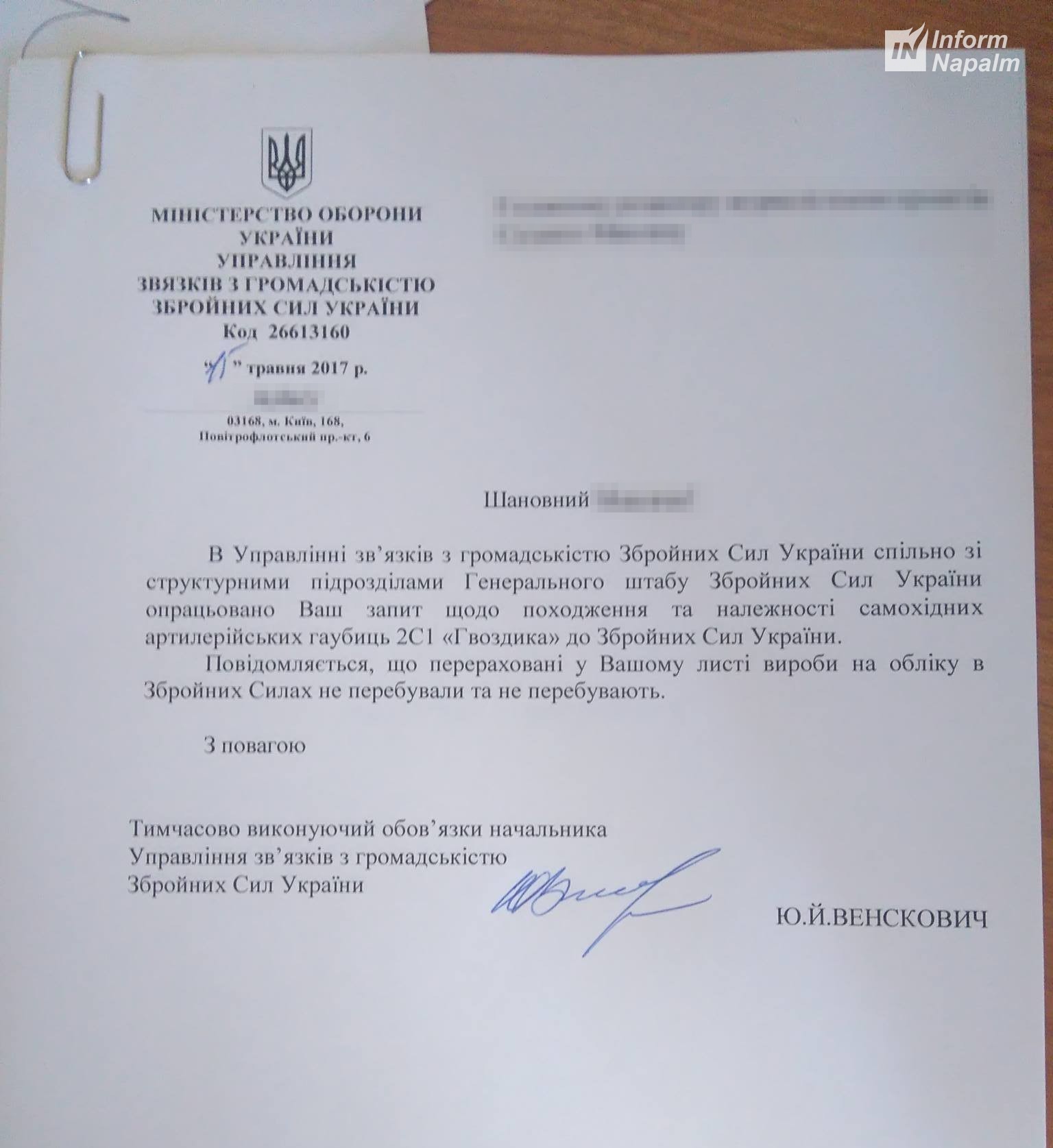 InformNapalm also received a photo of a handover note for five Russian military unmanned aerial vehicles (UAV) to the commander of the signals intelligence (SIGINT) of the 1st AC. The document was issued on December 10, 2014, valid until December 20, 2014. The document is in the name of the SIGINT company commander Vitaly Pyatnitsa (DPR military ID: # C 988) of the so-called 1st Army Corps of the DPR, stating that the latter is ready to receive from the 12th Reserve Command of the Russian Army (Novocherkassk, Rostov Oblast, military unit 89462) assets according to the form #12, namely: 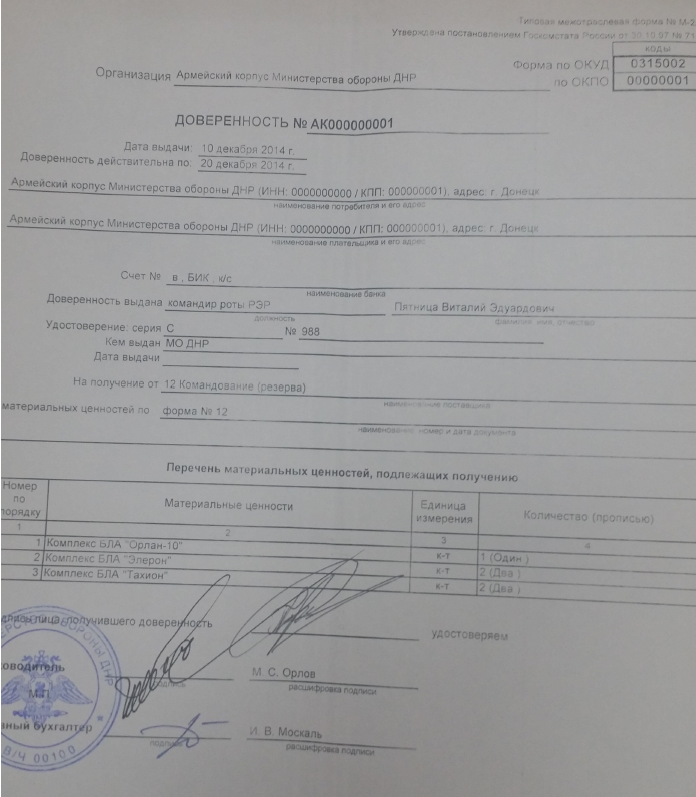 The above evidence gives a precise idea of who exactly supplies military equipment and weapons to the occupied districts of Donbas at the same time using propaganda and false declarations to convince the world of its innocence. Related publications on Russian supplies of weapons to Donbas

The participation of Russian military personnel in reconnaissance and control of Russian-made unmanned aerial vehicles (UAVs) in the occupied territory of Ukraine in the interests of the Russian occupation forces was confirmed. Russian soldiers who lost a Tachion drone in the Donbas were identified.

Reconnaissance commander of the 2nd Army Corps in the focus of the UCA. Part 5 PSNR-8

With this publication, InformNapalm volunteer intelligence community wraps up the series of articles analyzing the data retrieved from the office computer of the reconnaissance commander of the so-called 2nd Army Corps of the People’s Militia, the unit serving as the cover for the Russian occupation troops on the territory of Luhansk Oblast, Ukraine.

Reconnaissance commander of the 2nd Army Corps in the focus of the UCA. Part 2: UAV Forpost

With this publication, InformNapalm volunteer intelligence community wraps up the series of articles analyzing the data retrieved from the office computer of the reconnaissance commander of the so-called 2nd Army Corps of the People’s Militia, the unit serving as the cover for the Russian occupation troops on the territory of Luhansk Oblast, Ukraine.

Reconnaissance commander of the 2nd Army Corps in the focus of the UCA. Part 1 Orlan-10 drone

In this publication, we will peek behind the curtains of a successful operation carried out by volunteers of InformNapalm intelligence community and hacktivists of the Ukrainian cyber-alliance (UCA).

This publication was prepared by Mikhail Kuznetsov specially for InformNapalm.

Translated by Donbassföreningen Sverige
An active link to the authors and our project is obligatory for any reprint or further public use of the material.
(Creative Commons — Attribution 4.0 International — CC BY 4.0)
Repost and share with friends.
For notifications about InformNapalm investigations follow us on Facebook / Twitter / Telegram.

No Responses to “DPR Oplot brigade received artillery and drone systems from Russia. Photos and documents”