“Going from Ukraine to the Caucasus”. Conscript gave away “Ukrainian mission” of the 19th Motorized Rifle Brigade 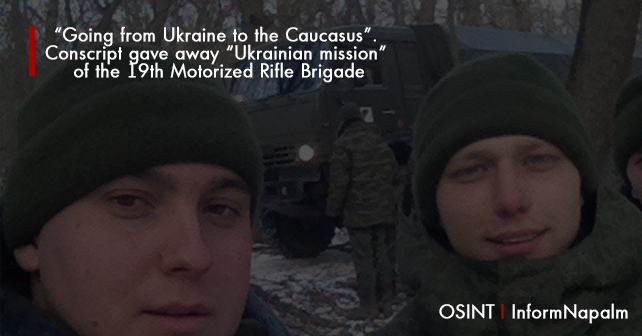 We revealed conscripts of the 19th Separate Motorized Rifle Brigade who came back from the “Ukrainian mission”.

In spring 2014, simultaneously with the treacherous operation of annexation of Crimea, Russia began to deploy a main attack force near the Ukrainian border in Rostov Oblast. The main bases of Russian troops in Rostov Oblast up to now have been Kuzminsky and Kadamovsky training areas and the vicinity of Millerovo.

Let us recall that in autumn 2014 InformNapalm volunteer intelligence community published the a of Russian units, pointed at Ukraine: see Units of the Russian Armed Forces Which Have Been Deployed to Fight in Eastern Ukraine.

In addition to these base camps serving for concentrating of invasion forces, Russians deployed smaller bases, so-called transshipment camps, along the whole Ukrainian border. These camps, located in close proximity of the border, are intended for temporary exception and further transfer troops, weaponry and military equipment to the “rebellious” Donbas and vice versa.

During the OSINT analysis of the VK account of Vyacheslav Babenko, a serviceman of the 19th Separate Motorized Brigade (military unit 20634, home base in Vladikavkaz, North Ossetia–Alania), Southern Military District (archived account, album, contacts) , we have found a picture with a geotag in Kuybyshevsky District of Rostov Oblast, which was uploaded on February 14, 2017. The exact location is within 7 km from the Ukrainian border, in outskirts of the so-called Kuybyshevsky Forest near the village of Zarechny where there is a road to Marynivka in Ukraine. 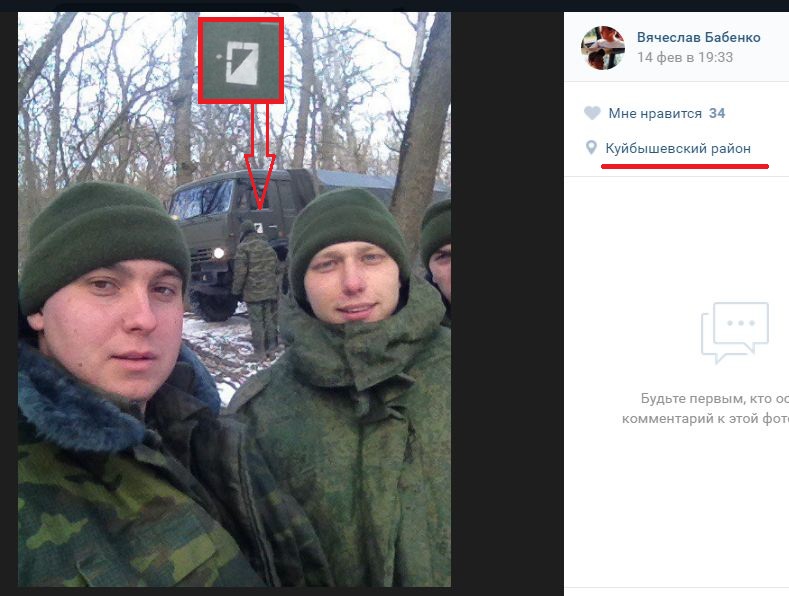 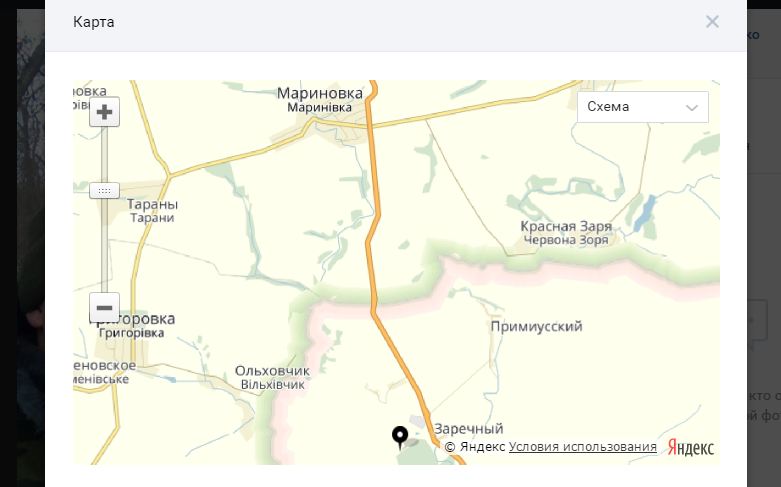 It the picture with the Kuybyshevsky District geotag you can clearly see the 19th Motorized Brigade tactical sign on the left door of the KAMAZ military truck. The two servicemen are dressed in uniforms with the Flora pattern that was discontinued in the Russian army several years ago. This uniform, along with Gorka uniform, has become the main uniform of “rebellious mine workers”, or, more precisely – the uniform of the Russian occupation contingent in the east of Ukraine.

Babenko’s other pictures are also noteworthy: not only he is posing wearing the Flora uniform, but also he is open in his comments. The Russian serviceman added a comment to another picture uploaded on February 14: “We are going from Ukraine to the Caucasus!!!” One of the pictures, uploaded in December, 2016, with a geotag in Vladikavkaz, has a comment: “The mission!!!” . In other pictures of the same series we can see other Russian servicemen of the 19th Brigade dressed in the Flora uniform. 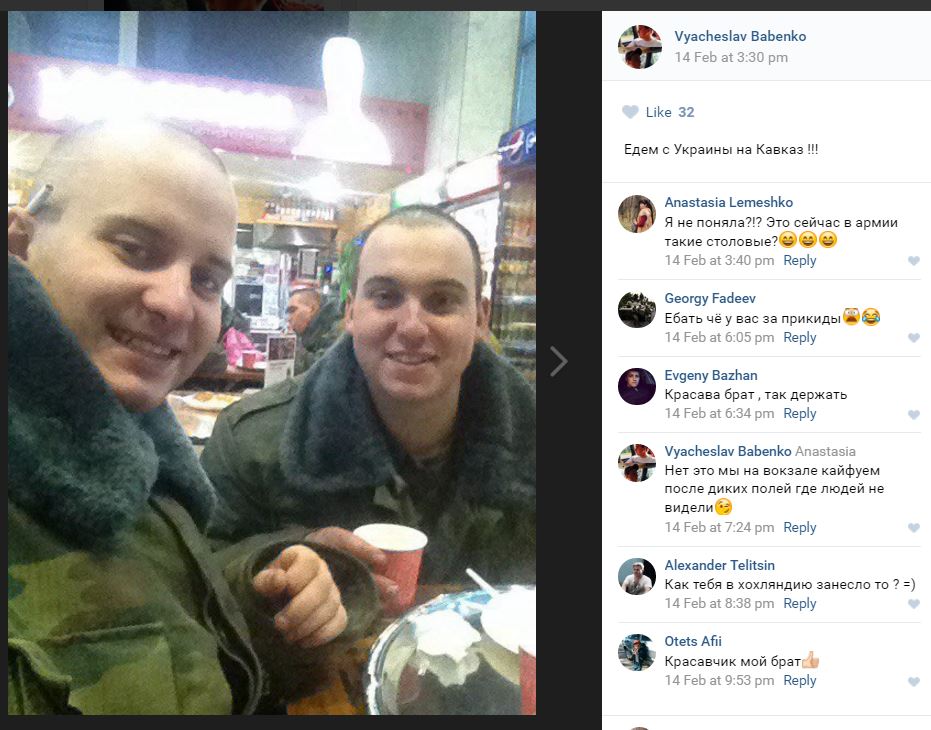 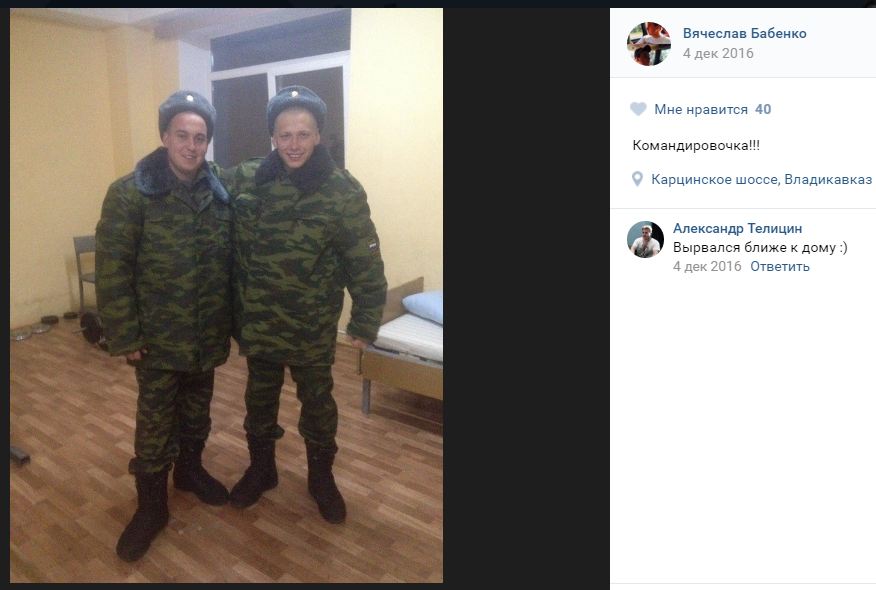 Perhaps, skeptics may say that all above mentioned evidence is indirect, but taking into account InformNapalm’s previous experience, this is quite enough to confirm the fact of yet another trip from Rostov to Ukraine of servicemen from the 19th Motorized Brigade. The more so as we have already noticed servicemen from this Vladikavkaz unit in the Donbas, including their participation in the illegal armed group Somalia.

There is another important detail: the involvant and information leak source V. Babenko is a conscript who was drafted to military service in autumn 2016. He is not a contract serviceman whom we usually see on “Ukrainian missions”. 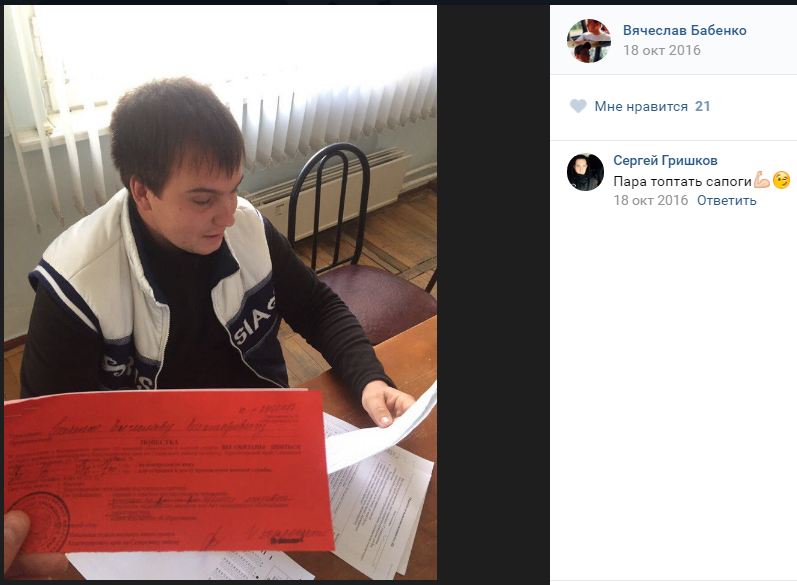 To sum up, we are making a conclusion that Russian military command uses in the Donbas not only contract servicemen but conscripts, too. Yes, V. Babenko’s mission was not as lengthy as missions of contract soldiers who serve in the “armies” of the Donetsk / Lugansk People’s Republics for 6 months. But the short-term deployment of conscripts to the Donbas (its probable task was a logistical support of a battalion tactical group of the 19th Motorized Brigade)  implies a lack of contract servicemen and staff turnover in the Russian Army which we have mentioned before (read more: A brief status analysis and morale assessment of the Russian Armed Forces).

The structure and weapons of the 19th SMRB.

The 19th Separate Voronezh-Shumlin the Orders of Red Flag, Suvorov and Red Labor Flag Motorized Rifle Brigade (military unit 20634, based in the village of Sputnik, Vladikavkaz) of the 58th Combined Arms Army of the Southern Military District. 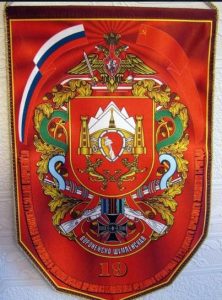 The 19th Brigade appeared in six OSINT investigations by InformNapalm. These publications presented  facts related to the invasion of Ukraine in summer-autumn 2014, as well as evidence of the later participation of contract soldiers of this brigade in the war in the Donbas:

This publication was prepared on the basis of an OSINT-investigation by InformNapalm volunteer intelligence community  Irakli Komaxidze. Translated by Evgeniy Kalashnik, edited by Svitlana Kemblowski

4 Responses to ““Going from Ukraine to the Caucasus”. Conscript gave away “Ukrainian mission” of the 19th Motorized Rifle Brigade”