Hybrid business in the pay of the Kremlin: blocking Kerch Strait

Ukrainian Military Portal identified the civilian ships that were used to block passage of Ukrainian warships under the arch of the Kerch Bridge erected by the Russian occupation authorities in the Kerch Strait in violation of all international laws. InformNapalm received another on-scene photo taken on November 25, in the afternoon before the Ukrainian ships were shelled and seized by the Russian border and military forces. In addition to the Neyma tanker as well as Bystryi and Gandvik tug boats identified before, there is another tug in this photo, right in the foreground. 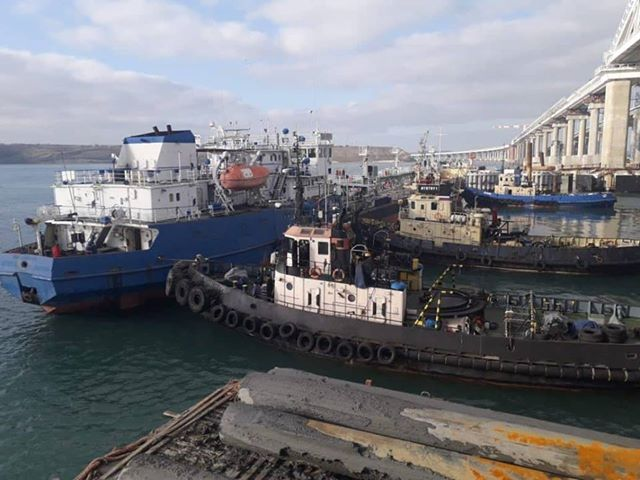 We identified the vessel. It was Eltigen tug boat, and, like the other vessels, it is owned by Yuvas-Trans Ltd. Below are pictures of the tug boat from the blocked area and a photo of the Eltigen. 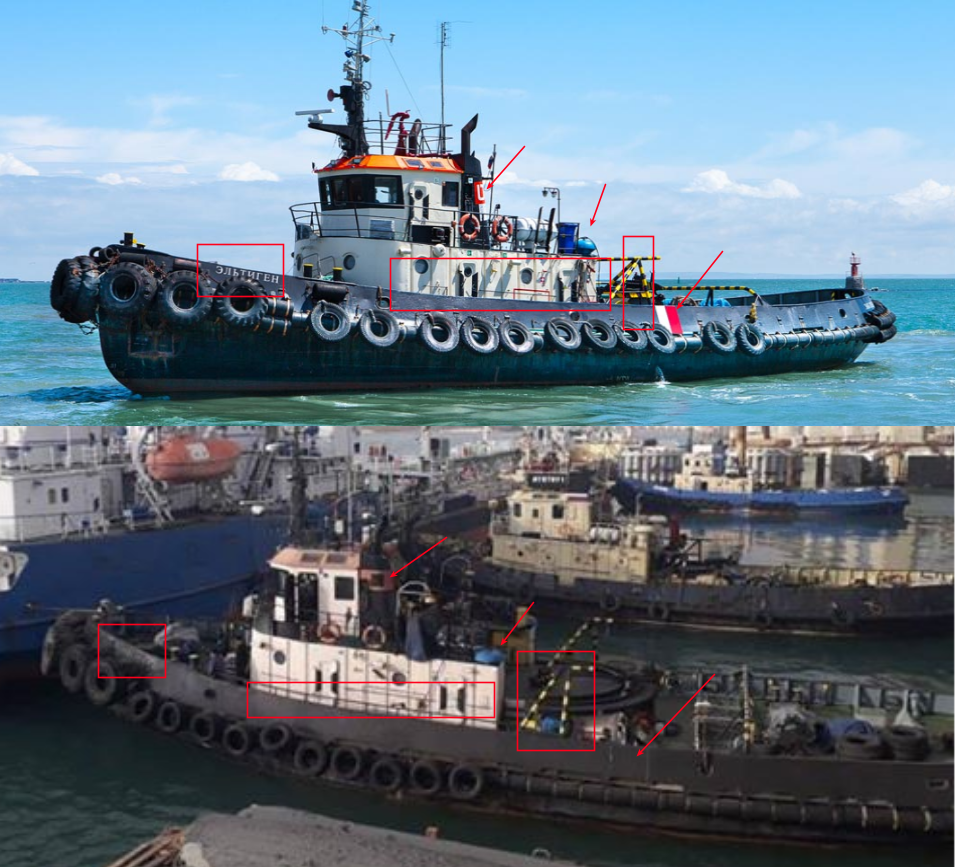 Apparently, it was no coincidence that the Yuvas-Trans’ ships popped up under the bridge. The crews obviously concerted their actions with the Russian military.

Let us take a closer look at the company which violated international law so recklessly?

Back in 2013, Yuvas-Trans Ltd. entered into a transaction with the State Property Fund of Ukraine to repurchase the integral asset portfolio of the Kerch Ship Repair Plant (KSRP). The privatization tender was announced and held in December 2013, at the height of Euromaidan, while the administration of President Yanukovych was still in power. In late January 2014, an amount of UAH30.25 mn was transferred to the state budget (it amounted to about $3.78 mn at the current official exchange rate of the NBU).

On July 11, 2014, a few months after the privatization of the KSRP, the company restored dock No. 2 that had mysteriously sunk in 2013, when the plant was yet state-owned. The restoration was carried out by Kerch Ship Repair Plant LLC and Yuvas-Trans-Verf LLC. By that time, Eltigen tug boat had also been restored after having been alongside the berths of the Kerch Ship Repair Plant for more than 10 years.

Yaroslav Anatolyevich Naroditsky is the founder of 8 companies registered in the Russian Federation. 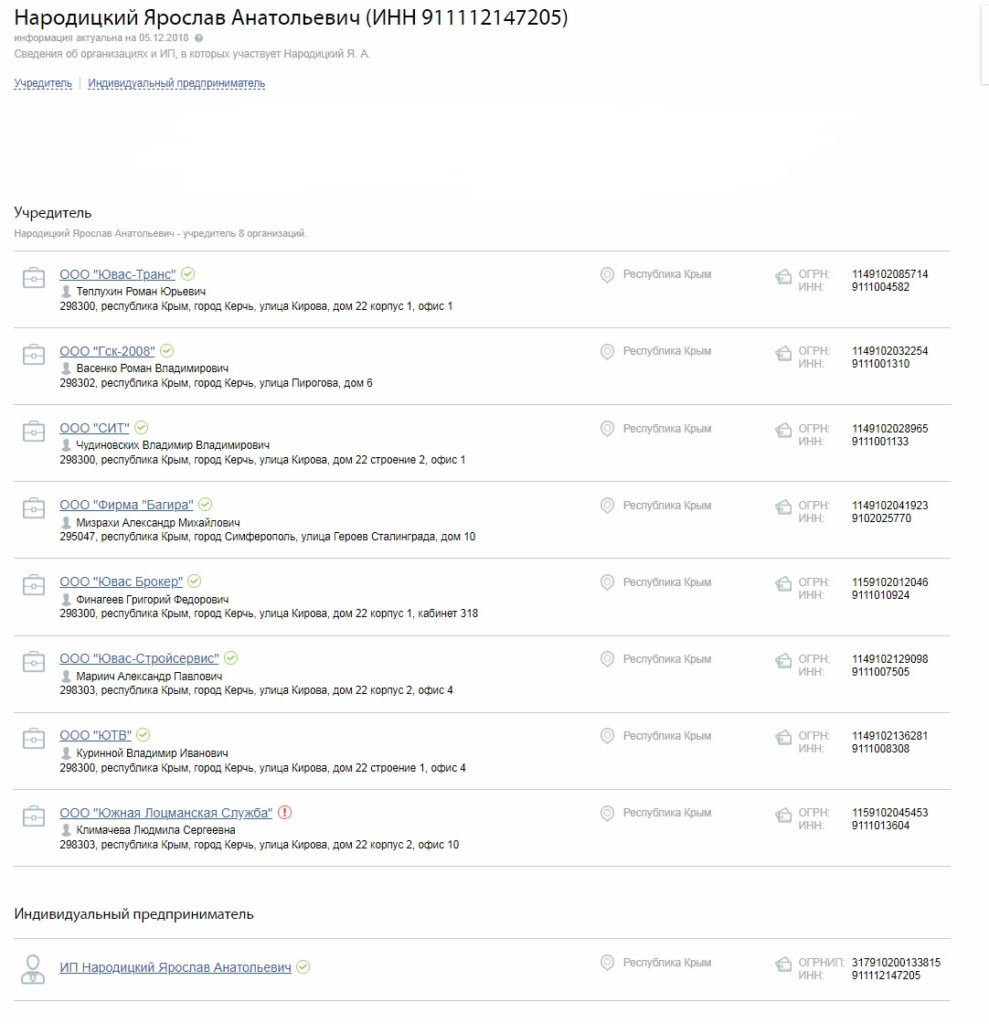 Anatoly Leonidovich Naroditsky is the founder of 5 Russian companies. 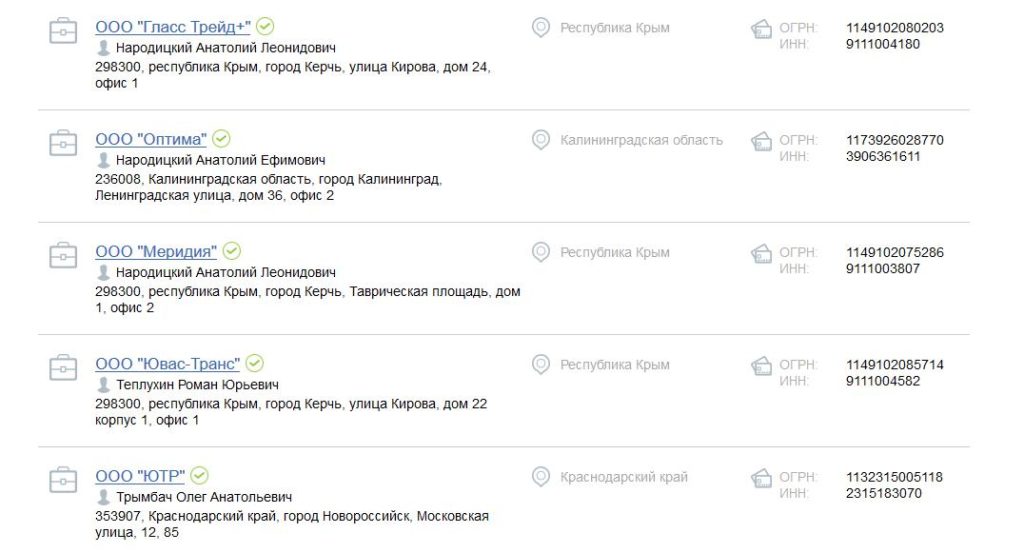 At the same time, we can see that they are also listed as founding members of a few companies in Ukraine.

According to open source information, Naroditsky are involved not only in systematic violations of the sanctions regime against the occupied Crimea, but also in various smuggling schemes outside Ukraine. For example, Goeast tanker owned by UVAS-TRANS LTD, sailing under the flag of the Comoros, was fired upon by the Libyan Coast Guard in October 2017 for smuggling fuel.

An episode with the detention by the Russian border guards of Smolny ship owned by the Naroditskys also bespeaks the shadow smuggling schemes. 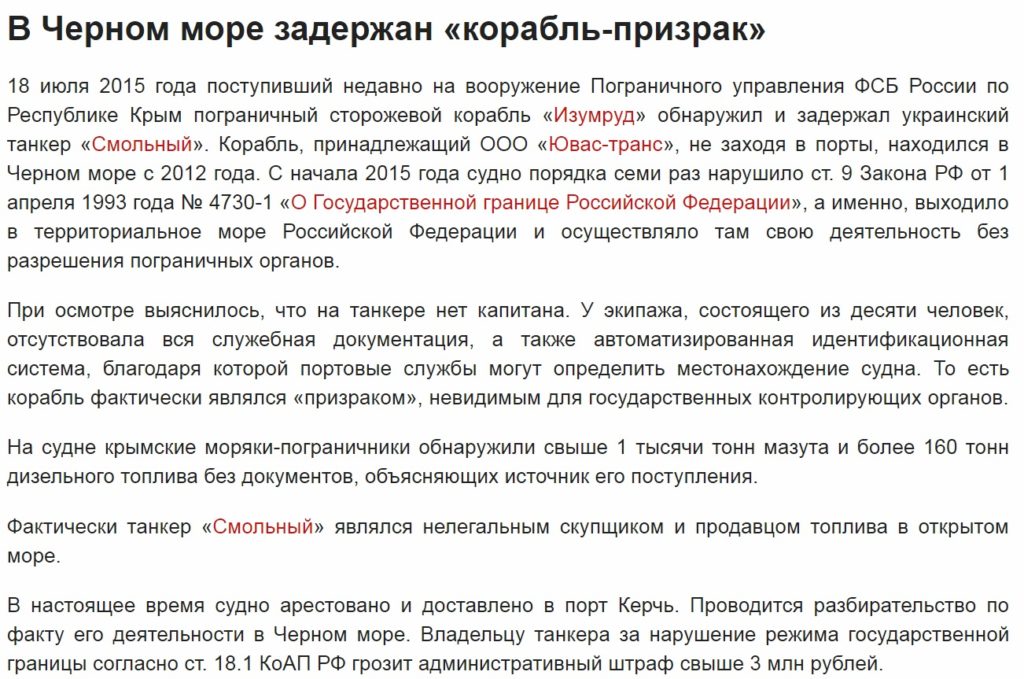 Anatoly Naroditsky, in his commentary for Gazeta.ru, confirmed that they intentionally used this scheme in order to skirt the sanctions imposed against Russia for the illegal annexation of Crimea. 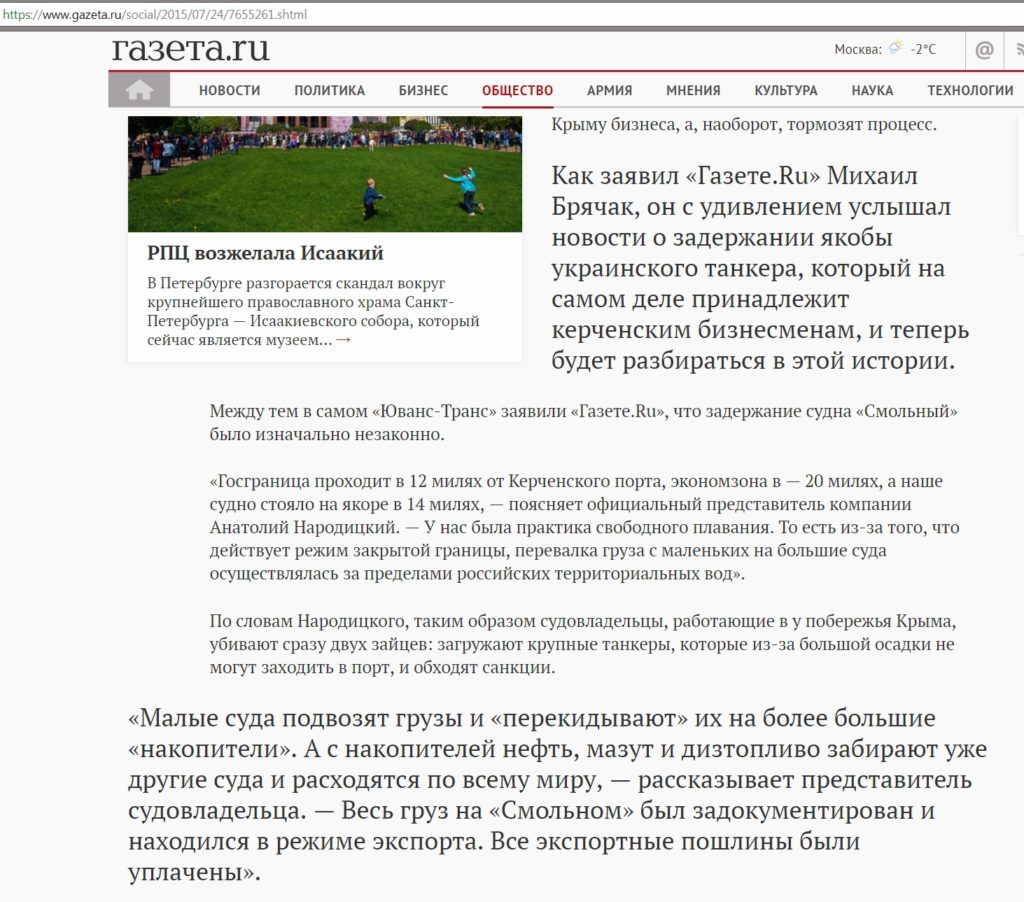 The Naroditskys caught the wave taking full advantage of doing international business through their Ukrainian enterprises, some of it covering European Union countries. On international websites, Yuvas-Trans is listed as a Ukrainian company. For example, at the Marine Bunker Exchange (MABUX), the Country line says ‘Ukraine’, and the contact phone numbers are Ukrainian. 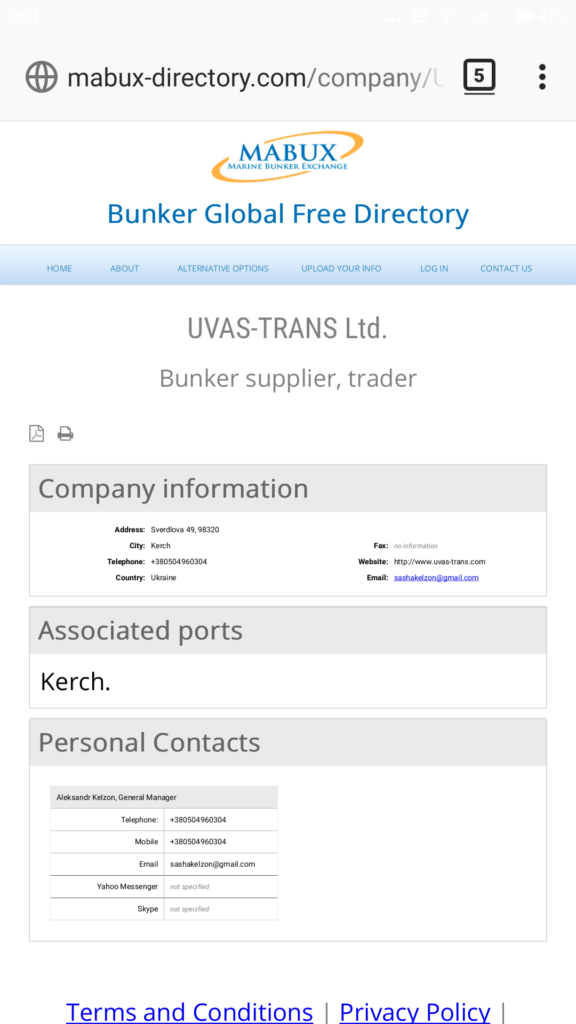 Here one can also see the name of the General Manager of Uvas-Trans Ltd.: Alexander Kelzon. He is not among the founders of Yuvas-Trans Ltd. but, according to the documents, Alexander Viktorovich Kelzon is the Director of Yuvas-Gazservis Ltd. 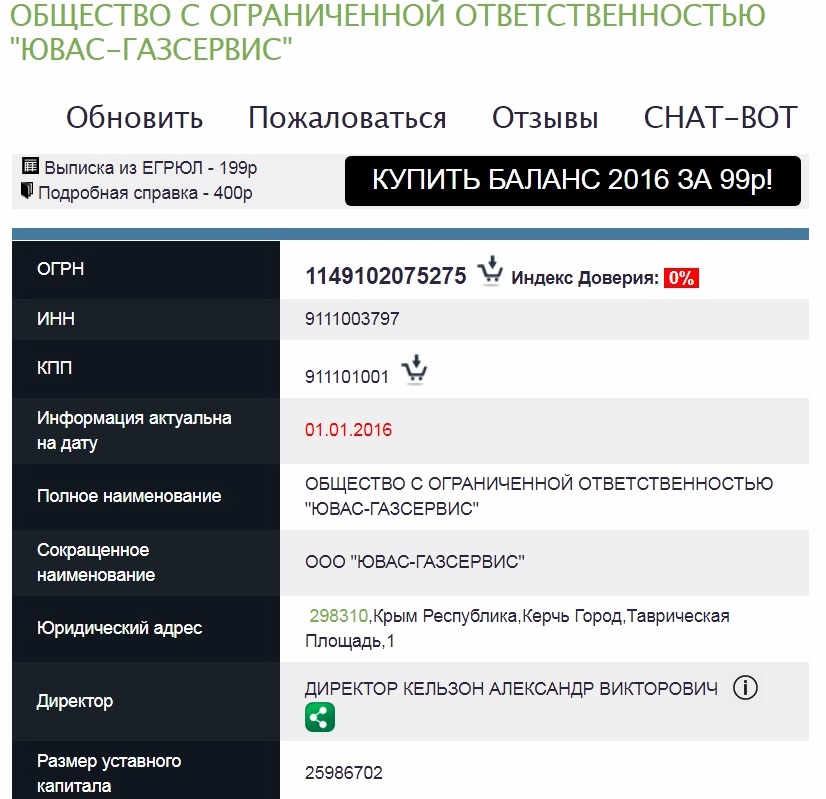 He is also included in the Ukrainian registers under Uvas-Gazservis Ltd. 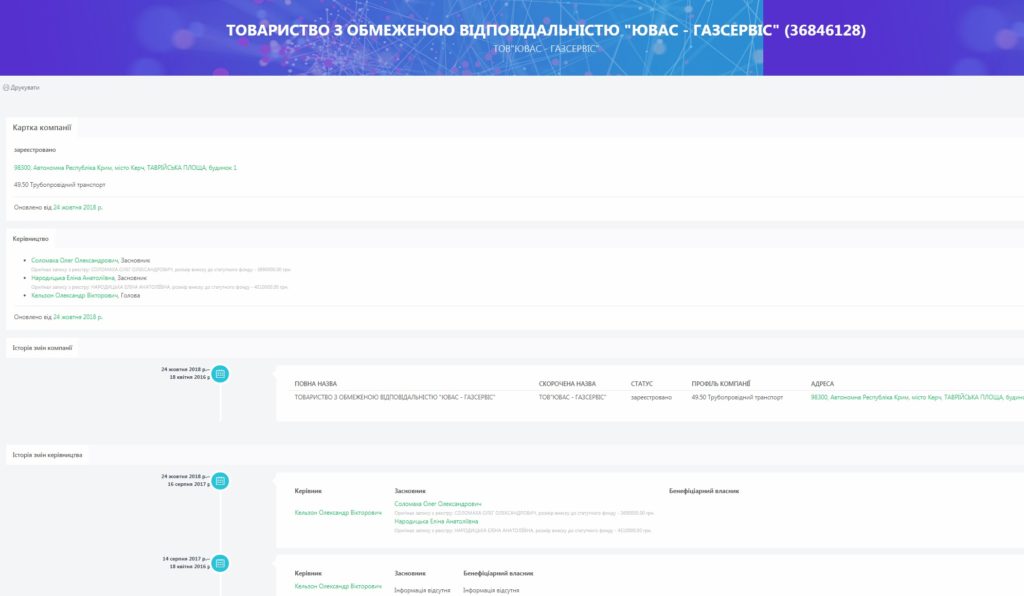 In addition, Kelzon is the head of Ravnovesie Ltd., an official dealer of Tyumen Accumulator Plant and TUBOR plant in Crimea. 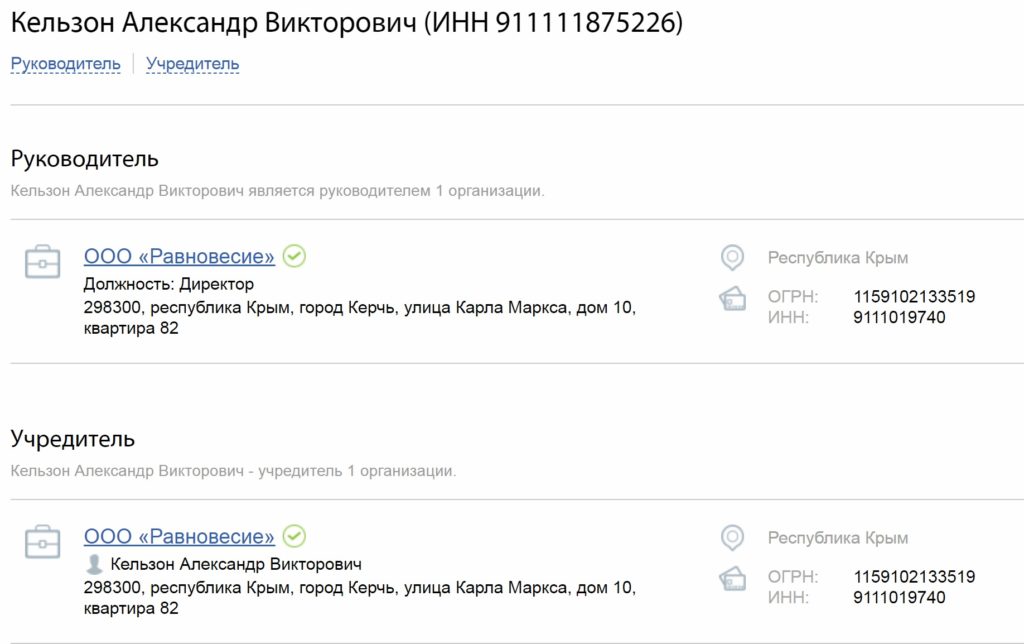 Kelzon is a very famous name in Kerch. In the 1990s, Victor Kelzon led one of the two most powerful criminal organizations that held the whole city at bay. Kelzon’s gang took control of the Port of Kerch. Alexander Viktorovich Kelzon is likely to be a son of Victor Kelzon who was killed in a shoot-out in 1996, so Alexander’s participation in criminal schemes is not particularly surprising. But let’s go back to the Naroditskys and UVAS-TRANS. A CV of one of the seamen (published in 2016) states that he worked on oil tankers from 2012 to 2016 for UVAS-TRANS, as well as for a company called Arida Trade LTD (with UVAS-TRANS acting as a crewing office). In the same CV, he also mentions the GOEAST fired upon by the Libyans, and the SMOLNY ship detained by the Russian border guards. 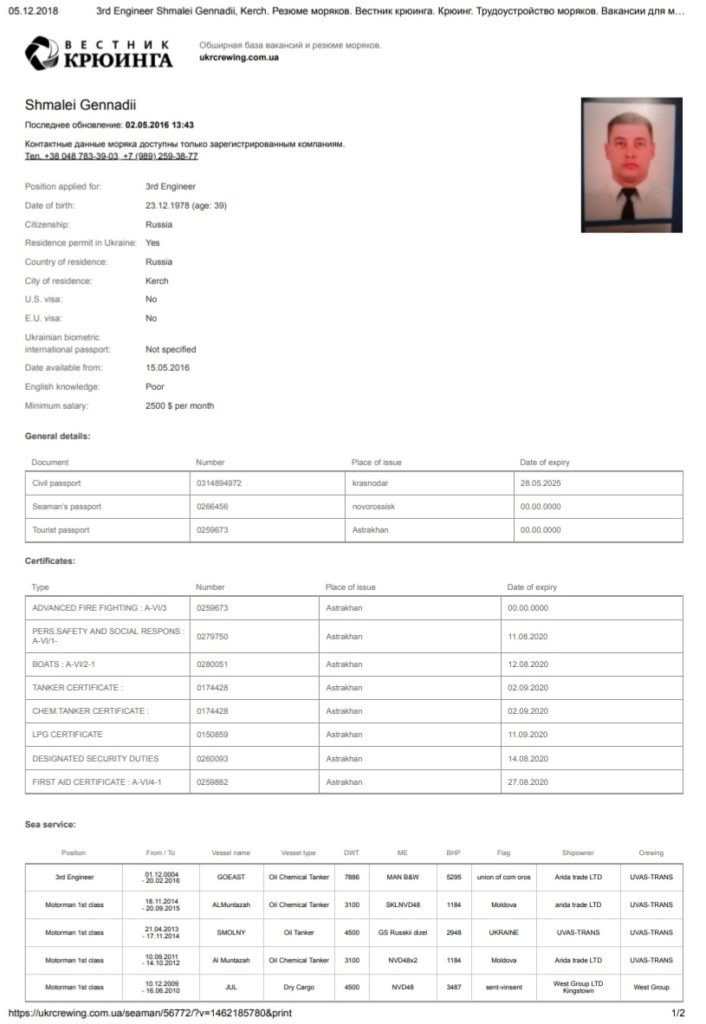 The mentioned AL Muntazah tanker can be traced here, where there are also records of its entry into Kherson Sea Port, for example, in 2017, and of its frequent presence in the Black Sea near Kerch. And here the name of Arida Trade re-emerges, but now it is Arida Trade LLP instead of Arida trade Ltd.

Arida Trade LLP is registered in Scotland at Suite 20 196 Rose Street, Edinburgh, United Kingdom, EH2 4AT. Here we see the name of Yaroslav Naroditsky again (with a typo, though), as well as his Ukrainian citizenship — probably, it was indicated with the same purpose, i.e. to do business in circumvention of the sanctions. 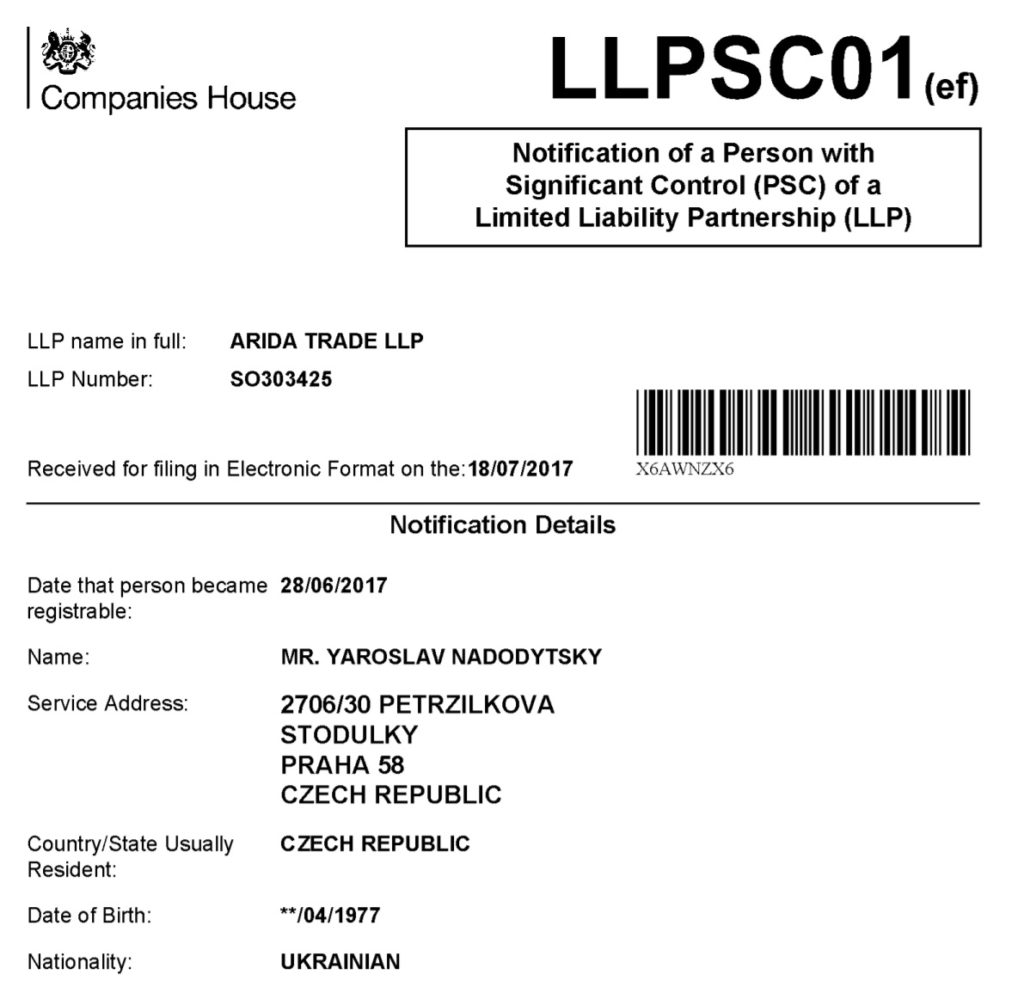 The company’s statement of financial position, indicating the turnover in millions pounds sterling, can be seen here. Earlier documents also contain references to Arida Trade LLP and the same Al Muntazah tanker, but sailing under the flag of Moldova. According to the docs, the tanker was sent to the Port of Mykolayiv (to the Black Sea Shipyard JSC) in 2013.

There is evidence online that the ship was repaired in the summer of 2014. 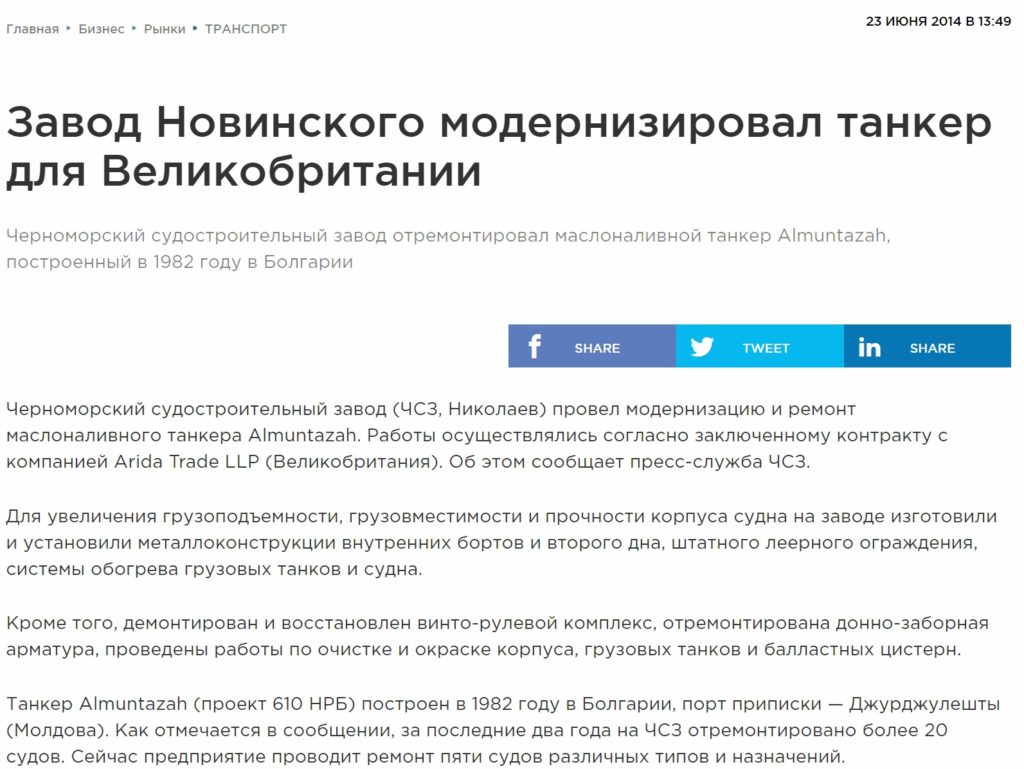 But the tangled web of the Naroditsky’s affiliated companies reaches beyond Edinburgh. It spread around the mainland Ukraine. The list of founders of these companies includes Elina Anatolyevna Naroditskaya (a sister of Yaroslav Anatolyevich Naroditsky and a daughter of Anatoly Leonidovich Naroditsky) and a Kharkivite, Oleg Alexandrovich Solomakha, with registered residence in Dnipro and in Kharkiv. 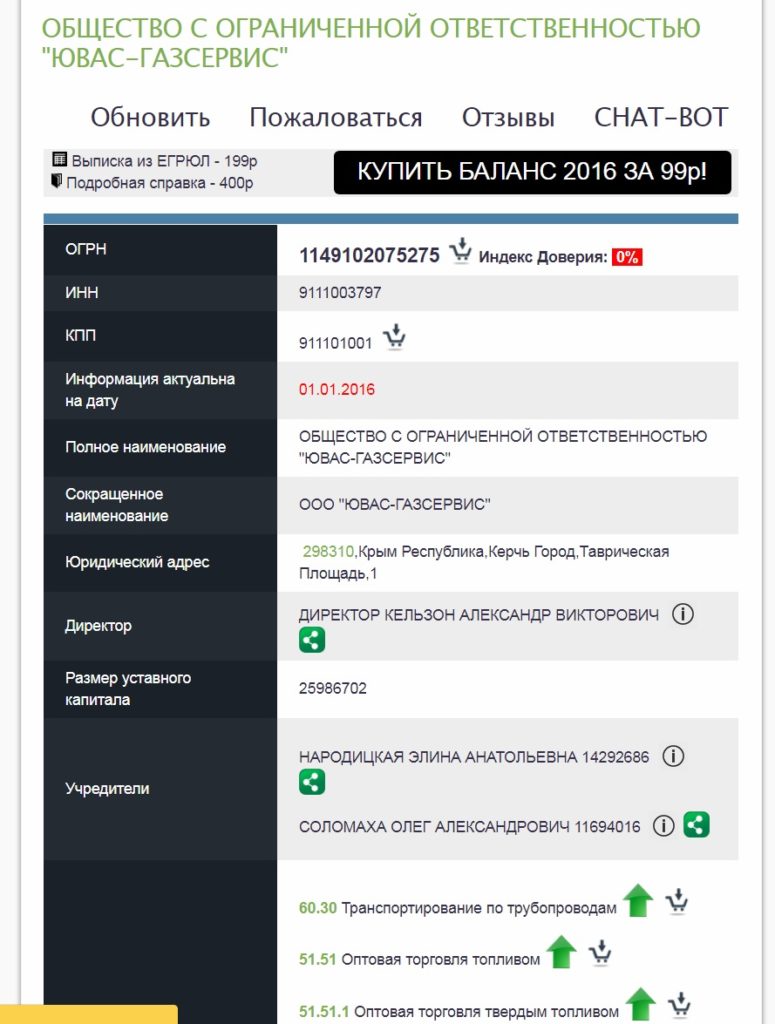 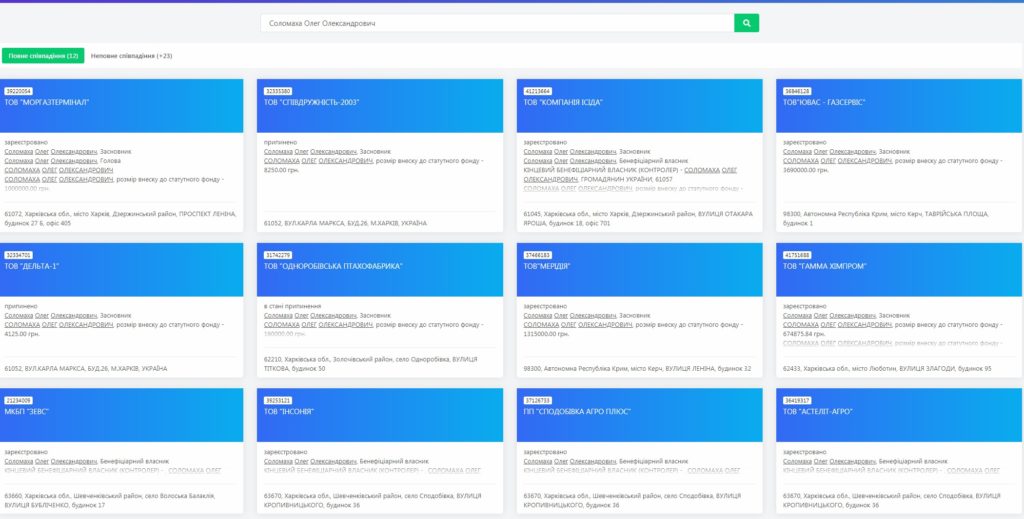 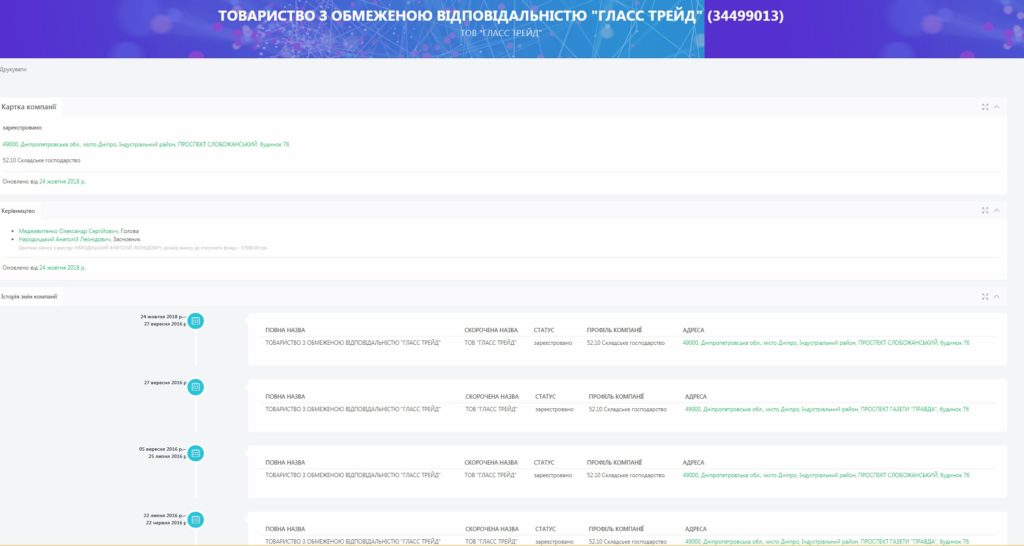 Is suspected of smuggling, systematic violation of the laws of Ukraine and international law, probable large-scale tax evasion, holding illegal dual citizenship, organization of a criminal network, and recent blocking of Ukrainian warships. This is just what the InformNapalm team was able to find by doing some easy digging. What else should the Naroditsky and their accomplices do to make the law enforcement agencies of Ukraine finally pay attention to their criminal activities? They are not included in the sanctions list of Ukraine, and their companies don’t appear in high-profile cases before the court. Why is their business growing without a hitch? Or, rather, let us pose the question in a different way: are there some law enforcement officials giving them cover?

Translated by Victoria Batarhuk, edited by Artem Velichko
An active link to the authors and our project is obligatory for any reprint or further public use of the material.
(Creative Commons – Attribution 4.0 International – CC BY 4.0)
Repost and share with friends.
Follow InformNapalm on
Facebook / Twitter

No Responses to “Hybrid business in the pay of the Kremlin: blocking Kerch Strait”