Immortal Regiment events – another challenge by Kremlin to the international community 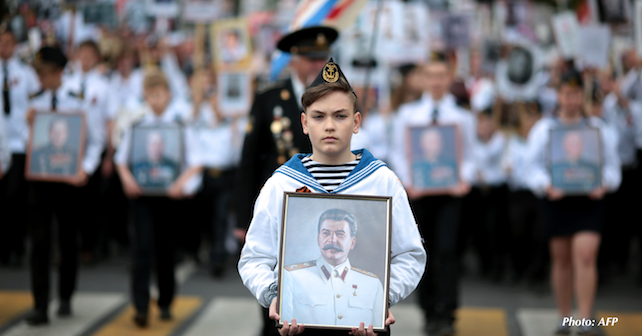 With the Russian propaganda showing no signs of abating around the world, InformNapalm is revisiting our last-year’s article about the Immortal Regiment marches held around the world. These events are held with a lot of pomp in Russia and are strongly encouraged by Russia in other countries. Let us remember how the marches looked last year.

Immortal Regiment marches are taking place in various locations on the occasion of May 9th Victory Day. Wikipedia describes Immortal Regiment as an ‘international social community for the preservation of personal memories of the Great Patriotic War’ established in Russia in 2011. It promotes the need to remember the horrors of World War II and its heroes who fought against the Nazi Germany.

Though the prominent role played by celebrations of historical events in the modern Russian culture is by itself a curious phenomenon, we will instead focus on the exploration of the reasons why this movement only pretends to represent the remembrance of the past heroes, in reality being another way for the Kremlin to indoctrinate its own people and influence the international community.

While the events certainly include the people who want to pay respects to their ancestors who lost their lives in the fight against Nazism more than 70 years ago, the event itself has been devolving into a farce, Russia itself as well as in other countries.

Let’s start with the fact that some participants carry portraits of Joseph Stalin, considered one of the bloodiest mass murderers of the 20th century. This could be seen in the photos and videos taken at the events in Hamburg and Crimea. Moreover, the latter looks like adding insult to injury given the Crimean context, where native population was deported or exterminated on Stalin’s orders, thus making a mockery of personal memories of the tragedy that erased families and caused the breaking of generational lineage. 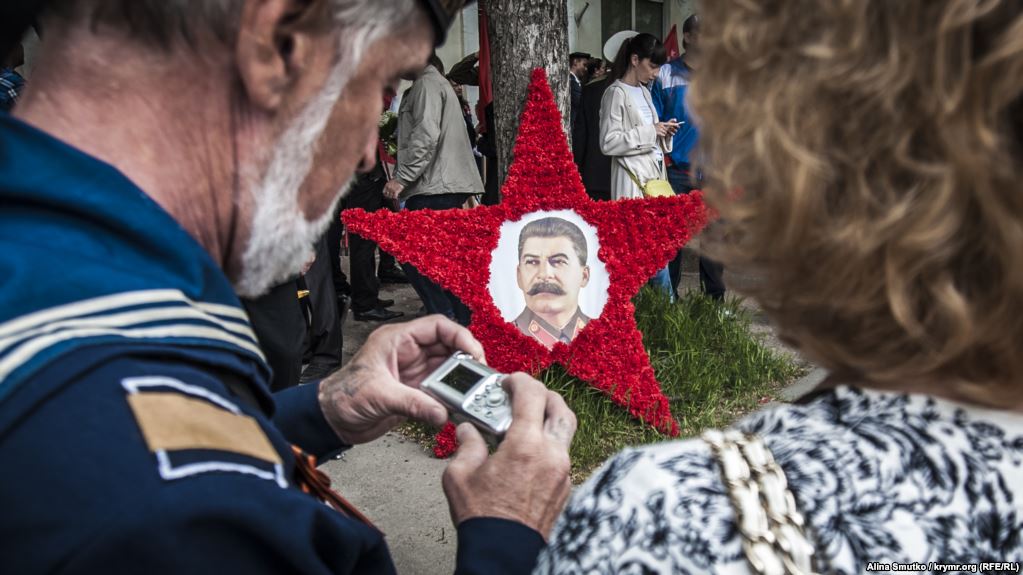 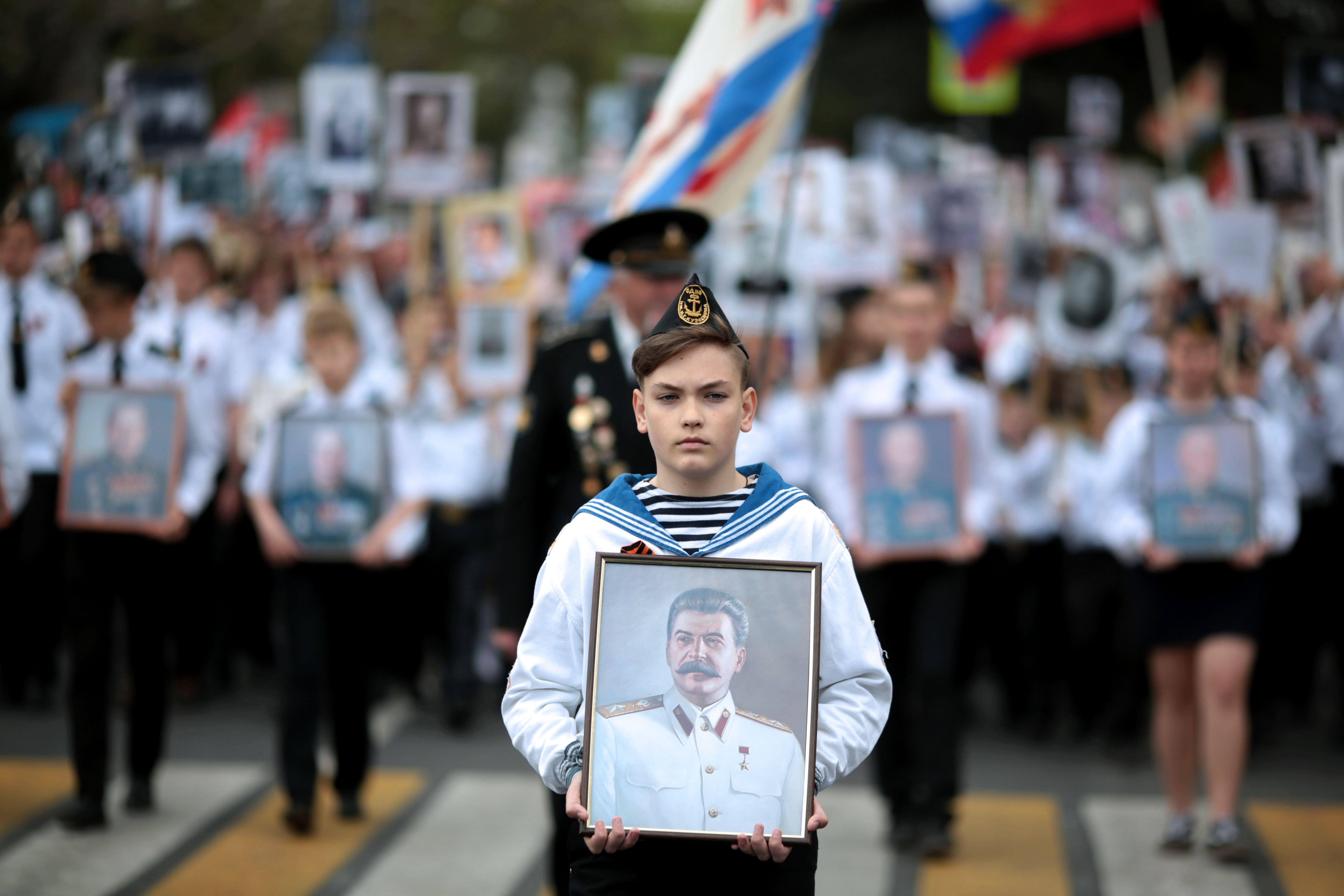 A march organized in Berlin unfolded in a heavy atmosphere of aggression, with the participation of the Night Wolves, a Russian biker group associated with the Kremlin, and their German “subsidiary”, the Russian-German Wolves, composed mainly of emigrants from the former Soviet Union. 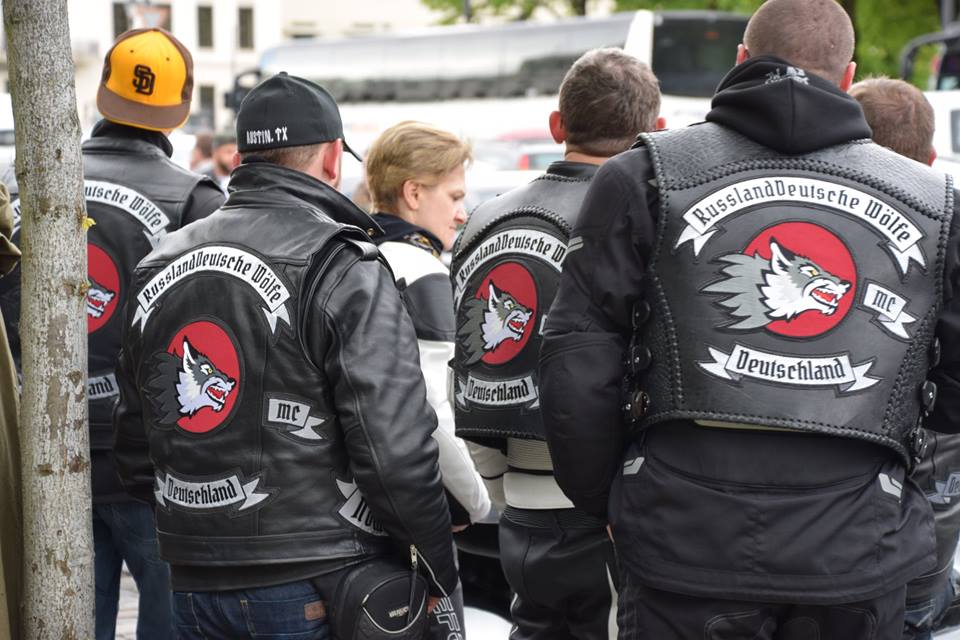 The rally was accompanied by cars with license plates from all over Germany covered with Soviet symbols, elderly persons waving red flags, and mothers who decided it was appropriate to dress their young children in army uniforms of the long defunct autocratic state.

Still, those people were not the worst ones. The march, declared as a commemoration of the victims of the fight against Nazism, included tough looking individuals wearing t-shirts that quoted the Chechen leader Ramzan Kadyrov: “The only proof of patriotism is action.“ Whether the message should be seen as a threat is a matter of opinion, but there’s another issue here: most Chechens obtain residence permits in Germany as political asylum seekers. In order to qualify for this status, applicants must show evidence of prosecution at home by the Kadyrov regime. So how can people who suffered under the rule of the Chechen dictator carry flags and wear t-shirts with his portrait? 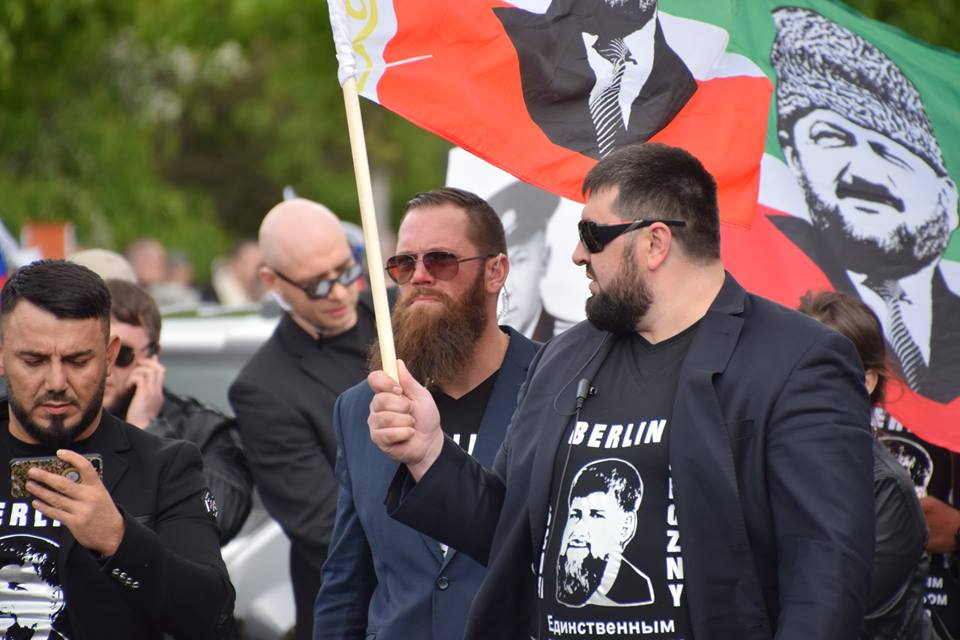 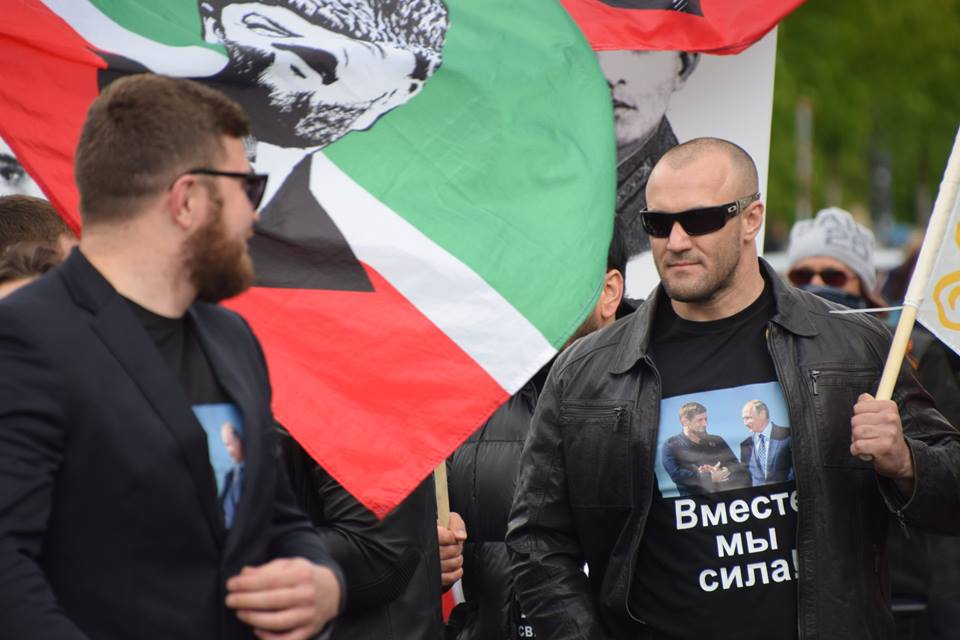 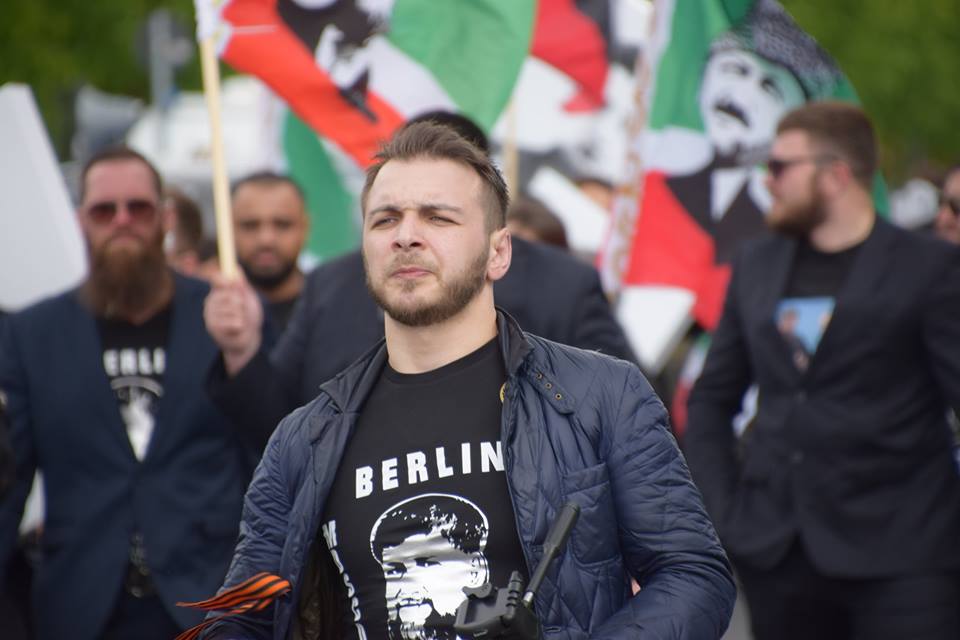 But wonders don’t stop there. During the march, demonstrators were seen carrying flags of the so-called Donetsk People’s Republic, essentially an illegal armed group. 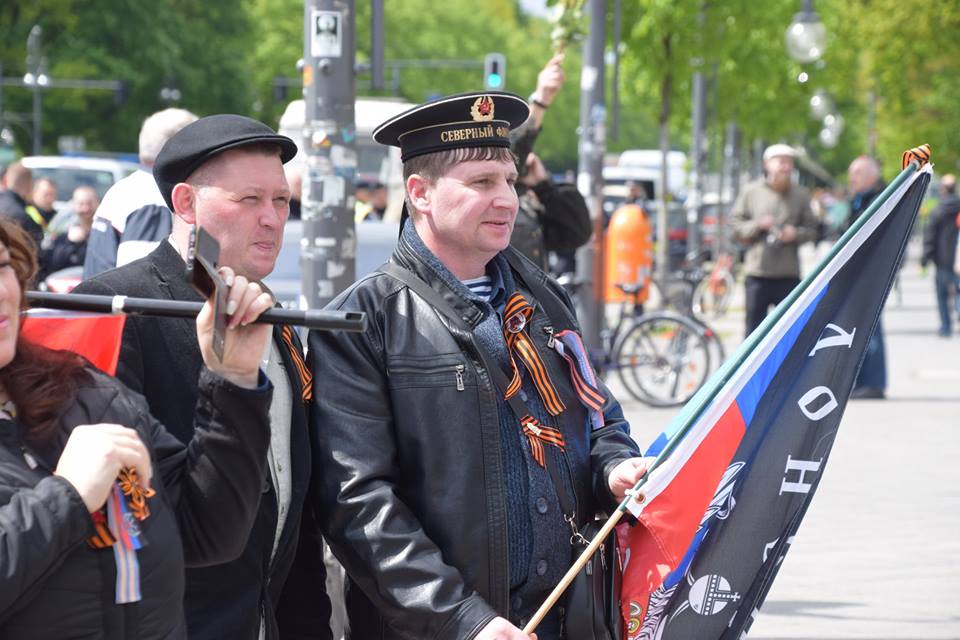 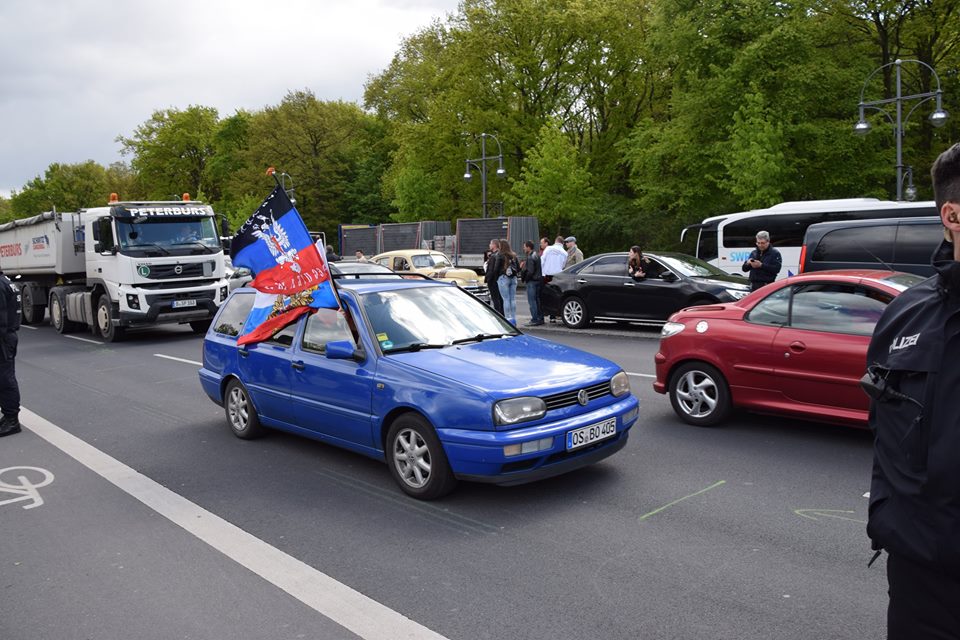 There were even banners of another formation, though one that never came into existence, Kharkiv People’s Republic. 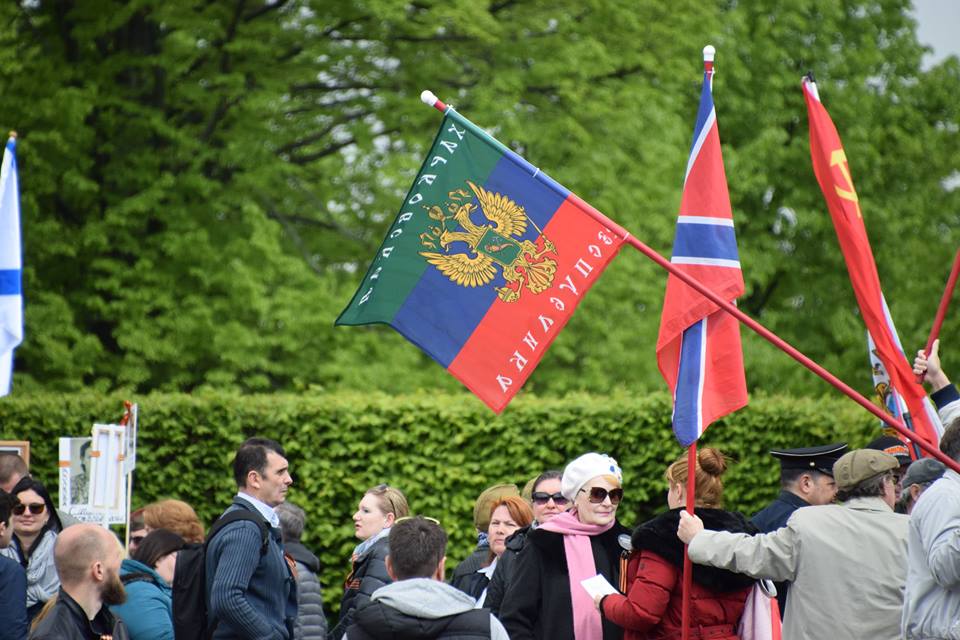 A march in Europe under the ISIS banners is unimaginable. Clearly, Ukrainian government should do all in its power to prevent the promotion of Donbas illegal armed groups in Europe and demand their symbols to be banned in other countries.

Similar events where communist insignia could be seen took place in Toronto, home to one of the largest expatriate Ukrainian communities in the world.

The events in Ukraine didn’t look much better.

In the occupied territories of Donetsk and Luhansk Oblasts, the situation is clear: terrorists carry portraits of dictators and mass killers, offering another proof of the falsehood of these events. The modern neo-Nazis are celebrating the victory over original Nazis. 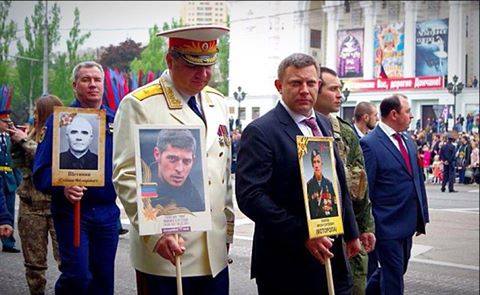 In the rest of the country, there were no explicit displays of provocative messages from the participants in the territories. Still, many people tried to join the march wearing St. George’s ribbons and other kinds of prohibited communist symbols. According to media reports, police interfered in instances of violation of the decommunization law, asking individuals to take off the ribbons and other prohibited symbols, explaining the legal grounds for these requests. 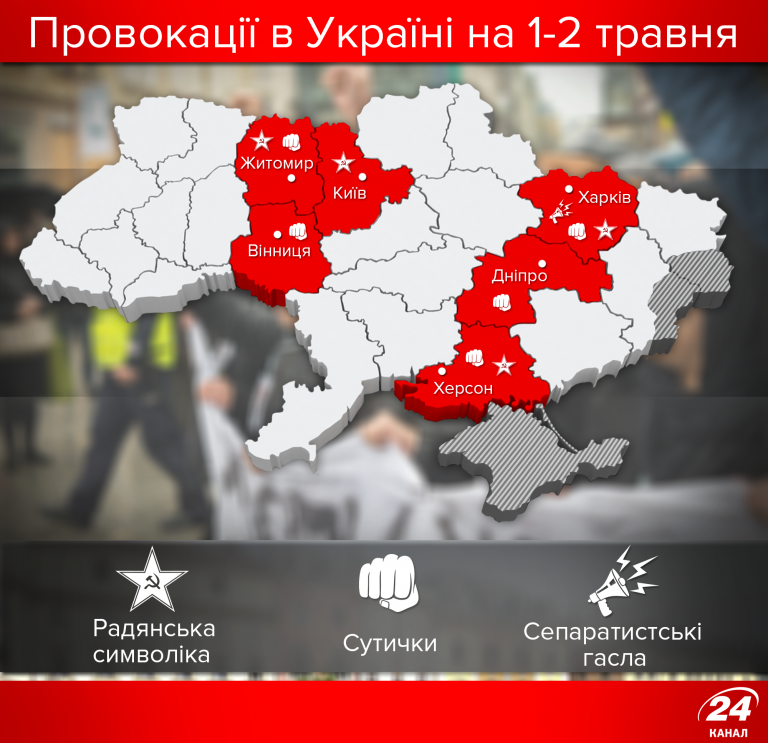 The presence of Ukrainian patriots caused a surprising reaction from the authorities.

In Kyiv, a group of young people was blocked for a period of time from unfolding the national flag at Slava Square. That is, Ukrainian national flag was not allowed to be shown in the capital of the country. After strong protests voiced by the activists, the flag was eventually unfolded, but the initial response was disconcerting. 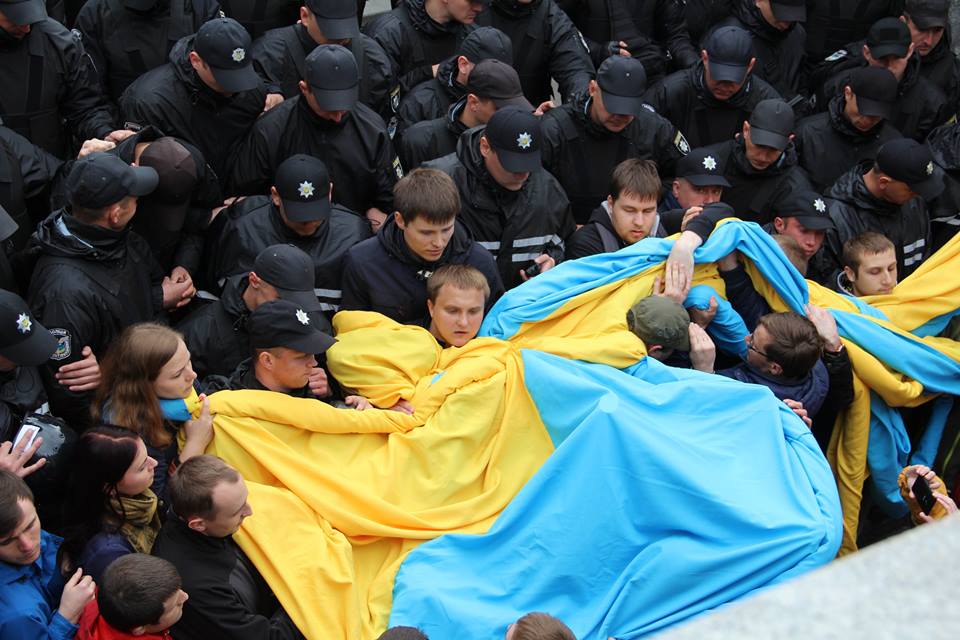 In Dnipro, civil patriotism was met with a stronger response, with police being openly hostile. In cooperation with groups of street thugs, police officers beat up ATO veterans. This caused furor in social media and the mayor, Boris Filatov, was put on defensive trying to explain the incident. The Minister of Internal Affairs, Arsen Avakov, responded to the reports of the incident by opening an internal investigation on the officers’ inaction and the support of street gangs. 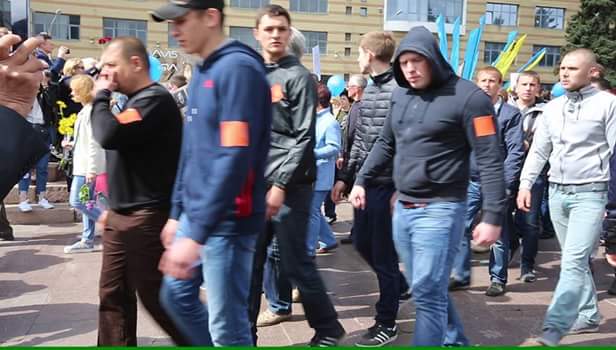 An incident also took place in the town of Mykolayiv between patriotically minded activists and pro-Soviet veterans of the war in Afghanistan. The police arrested both the followers of the Soviet ideology and the supporters of Ukraine.

In Kyiv, police broke in and searched the office of the OUN, Organization of Ukrainian Nationalists, raising many questions. Police claimed that the break-in was necessary “to prevent provocations”. However, the “prevention” included breaking doors, tear-gassing and assaulting the citizens who had not done anything wrong before the incident.

The press secretary for InformNapalm, Mykhailo Makaruk, was present at the march that took place at Slava Square in Kyiv. He said that police detained the ATO veteran Borys Krasovsky for no obvious reasons. When Mykhailo reached Pechersk district police office, presented his press card and asked for the explanation of the detention, he overheard this exchange: “We’ve got some clown from InformNapalm asking questions here. Make sure to get his data. Will do”

We are very interested to know what exactly those words meant. The community of InformNapalm has grown accustomed to threats coming from Russians, their messages to our editors filled with hatred, attempts to hack our website by the Russian FSB, even requests made to other country governments, including Canada, to ban our activity. But what kind of law would allow police officers of Ukraine, the state we have been trying to defend for the last 3 years as volunteers and whose interests we have been promoting internationally, to take pictures of our colleague with their cell phones? Where do they send those records, and what is the purpose of surveilling our representatives?

The takeaway from the marches is pretty clear.

Photo and video reports of the events presumably commemorating the victory over Nazism, whether in government-controlled Ukraine, in the occupied parts of Donbas, or other countries, show that the marches serve the agenda of the Kremlin and its supporters in promoting the current Russian regime, with its Soviet heritage and endorsement of the Red Terror, in essence an ideology little different from Nazism that these marches supposedly stand against. As for Ukraine, state authorities should codify by law the status of the illegal armed groups in the occupied areas of Donbas as terrorists, to prevent their promotion in the West.

There is only one day when the whole world celebrates the victory over Nazism and commemorates its victims: May 8th.

The Immortal Regiment really represents a campaign by the Russian Federation whose purpose is to provoke conflict and promote communist symbols and assert Russian influence in the Ukrainian and international communities.

By Irina Schlegel specially for InformNapalm. Main photo: AFP.  Translated by Spring, edited by Max Alginin. Distribution and reprint with reference to the source are welcome!
(Creative Commons — Attribution 4.0 International — CC BY 4.0)