InformNapalm’s Operational Summary for the First Week of December, 2014 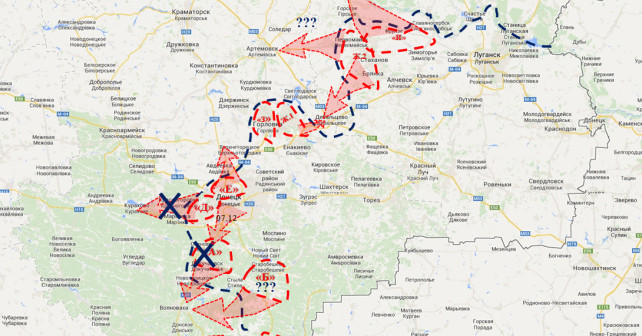 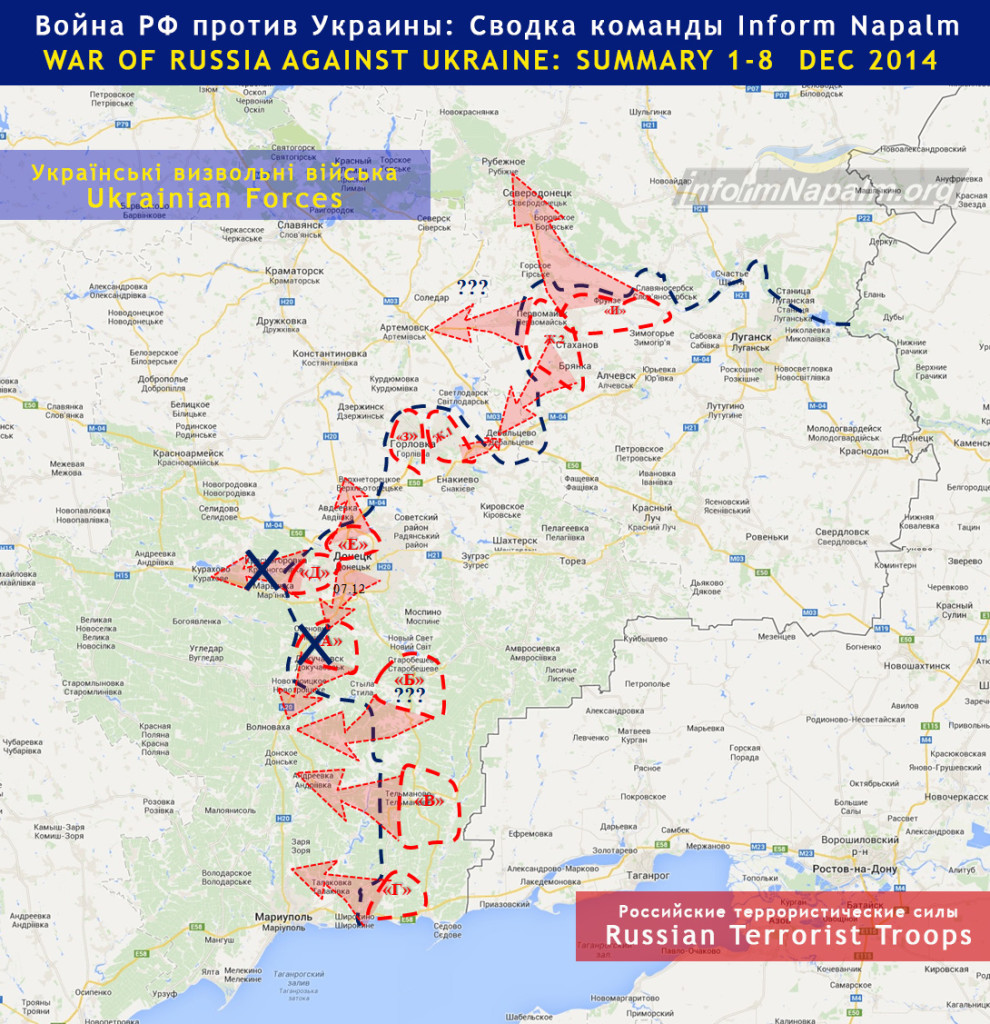 In this report we have summarized the attacks of the Russian terrorist forces (this is the collective name we will use for both the Armed Forces of the Russian Federation and the mercenaries from the Donetsk/Luhansk People’s Republic terrorist organizations) which have occurred since the beginning of December. We are also going to provide a brief assessment of the threat level in each area of conflict.

The attack planned by the militants in the Donetsk-Marinka-Krasnohorivka-Kurakhove direction was spoilt by the countermeasures of Ukrainian artillery. Since the 1st December Ukrainian artillery had been inflicting successful retaliatory strikes against the emplacements from which the enemy had been conducting ranging fire. Thanks to the combined efforts of the Armed Forces of Ukraine and guerrilla groups operating in Donetsk, terrorist groups were defeated twice at their starting line in Staromykhailivka (western outskirts), where they massed to attack Krasnohorivka. The first time they were defeated was on 2nd December, the second time was on the night of 5th and 6th December. Nevertheless, in the evening of 7th December, the militants attempted to attack Krasnohorivka even though they were without armored vehicles. The attack was supported by their artillery. The attempt failed.

In addition, the Headquarters of the militants (located in the area of Markina street) was destroyed. This played an important role in thwarting the plans of the enemy. Therefore, an attempt of the militants to attack towards Oleksandrivka-Marinka also failed. The militants had up to one mechanized company and an armored platoon in this attack.

Therefore, the probability of an attack in these specified directions in the next few days decreases.

As for the Donetsk Airport-Avdiivka direction, mass media writes constantly about fights in that area. It is now the “point of honour” for the militants to capture the airport.

We have received information from our own sources close to the military leadership of the DPR that the militants are sceptical about their ability to capture the airport without first expelling Ukrainian artillery from Pisky. In this regard, we can expect attacks towards Abakumova-Pisky during the active phase of the confrontation.

The probability of an attack towards Horlivka-Dzerzhynsk is very low at the moment. The enemy suffered significant losses after shelling of Horlivka on December 12 in the area of DonNTU (Donetsk National Technical University). There are many rumors regarding enemy losses. According to sources the enemy has lost: one BM-27 “Uragan” Multiple Rocket Launcher, two D-30 howitzers, and six cars with ammunition. Losses in the manpower are up to 30 killed and 70 wounded. It is possible that the real numbers exceed these figures. According to insiders, the glow from the fire from the destroyed vehicles could be seen very far.

The militants attempted to attack along the H20 highway. This resulted in the filling up of the morgue at Kalinin’s Hospital in Donetsk. Given that in the evening of 7th December our insiders observed movement of a large convoy of militants over the H20 highway from Donetsk towards Olenivka, we conclude that attacks in the Olenivka-Volnovakha direction remain possible.

On December 3, unknown persons shelled Komsomolske. There were several different opinions in the Internet: Donetsk People’s Republic’s mass media traditionally thrown responsibility upon the ATO Forces; others thought of an intestine strife between the militants and Armed Forces of the Russian Federation. We are not going to guess what has happened in the reality. We would like to recall that the “Oplot” brigade was withdrawn from Donetsk towards Starobesheve right before the described events. It is very likely that those who shelled Komsomolske hit not only residential areas because the commander (call sign “Ryazan”) of one of the militants units promised to avenge for Komsomolske. Our insiders reported that after the described events Komsomolske and Starobesheve were closed. Judging by our experience with other regions, “closing” of cities or certain territory after shelling usually indicates large losses among the militants. This also means that the probability of an attack towards this direction has decreased a bit, although it is noteworthy that over the past few days we have observed movement of military equipment (from the territory of the Russian Federation as well) towards this area.

As for Telmanove and Sakhanka (these are two starting lines for possible attacks of the enemy), the militants continue to gather military equipment there and therefore Mariupol remains under threat. Attack directions have not changed since the last report.

Over the past week the terrorists have shelled Debaltseve very viciously. On December 6 we observed movement of heavy military equipment in Horlivka and Yenakijeve towards Vuhlehirsk. Besides, from time to time we receive reports on movement of militant groups on the M03 highway from the direction of Krasnyi Luch towards Debaltseve. It is most likely that the terrorist will attempt to capture the city in the nearest future. Attack directions are Yenakijeve-Vuhlehirsk-Debaltseve, Krasnyi Luch-Fashchivka-Debaltseve, and/or Perevalsk-Verhulivka-Debaltseve.

Over the past week the situation in the city remained calm with the exception of a few incidents: according to the locals, on December 2 there was a skirmish between the LPR militants and the Cossack National Guard (not to be confused with the National Guard of Ukraine). During the conflict, one civilian was wounded, the losses among the militants are unknown. The militants periodically perform artillery preparation.

Militants continue to shell Hirske from Pervomaisk. That is why the probability of an attack towards Lysychansk remains high, especially taking into account that the militants need bridges to cross the Seversky Donets river. Although it is winter now, tanks on the ice can share the same disaster as the Teutons in one of their famous battles.

Lysychansk remains a promising target for militants because control over the ferries allows Russian forces to send military equipment through the eastern border of Ukraine and pretend that this equipment belongs to the militants and came from Lysychansk (recall Mariupol). There could be an attack in the Pervomaisk-Artemivsk direction to distract attention. That attack will be the start of the creation of a pocket around Debaltseve; bloggers and mass media will for sure make a big thing out of it, just the same way as with Ilovaisk. For this very reason the attack in the Pervomaisk-Artemivsk direction is in question on our map.

Despite constant shelling of Shchastya and Stanytsia Luhanska, the probability of attacks remains very low until the militants gain control over the ferries over the Seversky Donets. We can expect artillery duels here.

The Economic Domain of the DPR/LPR

We acquired information that “the economy” of the occupied territories received “inflow” from the Russian Federation. The “Inflow” was due to the smuggling of huge quantities of contraband spirit, which was used to “produce” vodka and mix “cognac”. Thus, according to the locals, stores and markets of Antratsyt started to sell various “wines and liquors”. The situation in other cities of the LPR looks similar.

In the mining industry the slump in production is noticed. At the mines owned by Akhmetov a period of relative “well-being” has come to an end. For example, at the Frunze mine the Rovenkiantratsyt of DTEK announced plans to send about 70% of workers on unpaid leave. The reason is the inability to encash the mined coal. The management was unsuccessful with establishing stable deliveries of coal to Russia. The same situation is in Sverdlovsk.

Despite the formal “ceasefire” confrontation and `holding’ situation, warfare has continued particularly with artillery duels. The successful action of the partisan underground, which maintains its own fighting behind enemy lines, deserves our special attention. These actions provoke terrorists to make errors: opening of “friendly” fire, and as a result, internal fighting and losses. The expression #WalkAndWatchYourBack for the terrorists has become not only an Internet meme, but also an everyday reality.

3 Responses to “InformNapalm’s Operational Summary for the First Week of December, 2014”