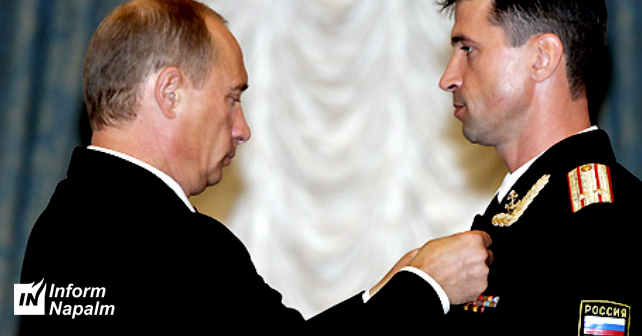 Volunteers of the InformNapalm intelligence community have collected new data on the 810th Russian Black Sea Fleet Marine Brigade which took part in the occupation of Crimea.

In the previous InformNapalm investigations, the 810th Russian Black Sea Fleet Marine Brigade (military unit 13140 stationed in Sevastopol, the temporarily occupied Ukrainian territory) has been mentioned on several occasions: the investigations revealed evidence of the participation of servicemen of this unit in the aggression against Ukraine (in Donbas – 1, 2, in Crimea – 1, 2) and against Syria. In this publication, we disclose the data of several more servicemen of the 810th Marine Brigade whose participation in the occupation of Crimea was established using open source intelligence. It is also worth noting that the list of the military officers and representatives of the Russian authorities who were served charges by the Main Military Prosecutor’s Office of Ukraine, mentions only the deputy commander of the 810th Marine Brigade of the Black Sea Fleet, lieutenant-colonel V. V. Karpushenko. However, we believe this list should be updated to include the name of colonel Vladimir Belyavskiy, the commander of military unit 13140, as he signed the award certificates for medals for the occupation of Crimea to the servicemen identified in this investigation.

Colonel Belyavskiy signed award certificates for the occupation of Crimea

The subjects of the investigation posted their award certificates for the occupation of Crimea on their social network pages. The certificates were signed by the commander of the 810th Marine Brigade (military unit 13140) colonel Belyavskiy Vladimir Anatolyevich. It is known from open sources that colonel Belyavskiy served as a commander of the 810th Marine Brigade from January 2010 until September 2014. From September 2014 to 2016 he studied at the military academy of the General Staff of the Russian Army, from June 2016 to September 2017 he was a commander of the 40th Marine Brigade of the Russian Pacific Fleet (military unit 10103), and since September 2017 he has been a commander of the 212th District Training Center for training junior specialists of tank troops (military unit 21250). He took part in hostilities in the North Caucasus. By the presidential decree # 860 dated August 8, 2006, Vladimir Belyavskiy was awarded the title of Hero of the Russian Federation with the award of a special badge of distinction – the Gold Star medal. There are several photos, taken at different periods, that show him together with the Russia’s president Vladimir Putin. 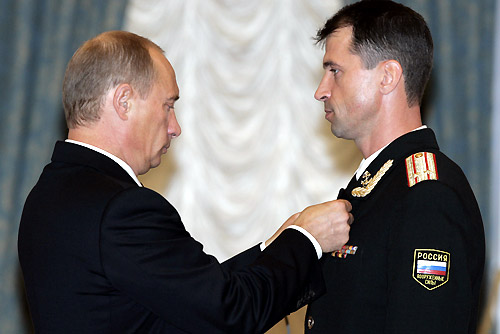 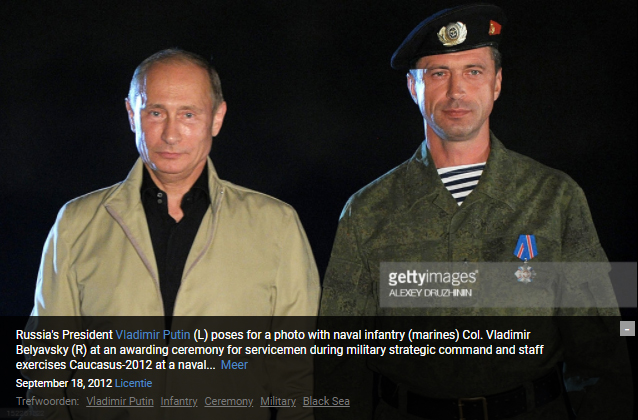 Apparently, this experienced professional military man not only signed certificates for the awards of his subordinates for his participation in the occupation of Crimea, but also took an active part in the tactical command of the 810th Marine Brigade units that carried out special missions as part of the operation to seize military facilities of the Ukrainian Navy in Crimea.

Born on January 14, 1994 in Taganrog, Russia. In 2013-2014 he served in the 810th Marine Brigade of the Black Sea Fleet in Sevastopol. He took part in the occupation of Ukrainian Crimea and was awarded the Russian Ministry of Defense Medal For the return of Crimea. The relevant award certificate was signed by colonel Belyavskiy, commander of military unit 13140. 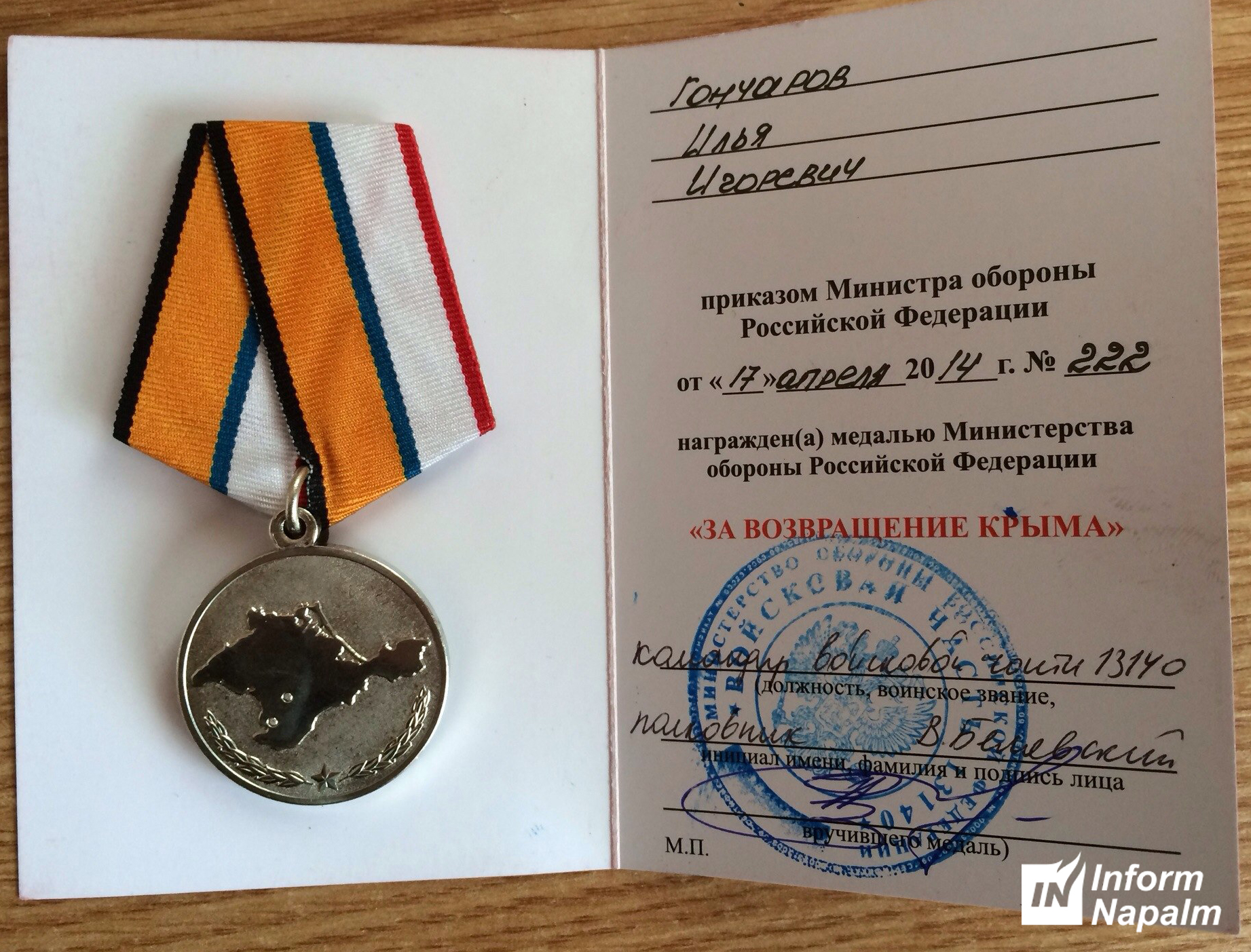 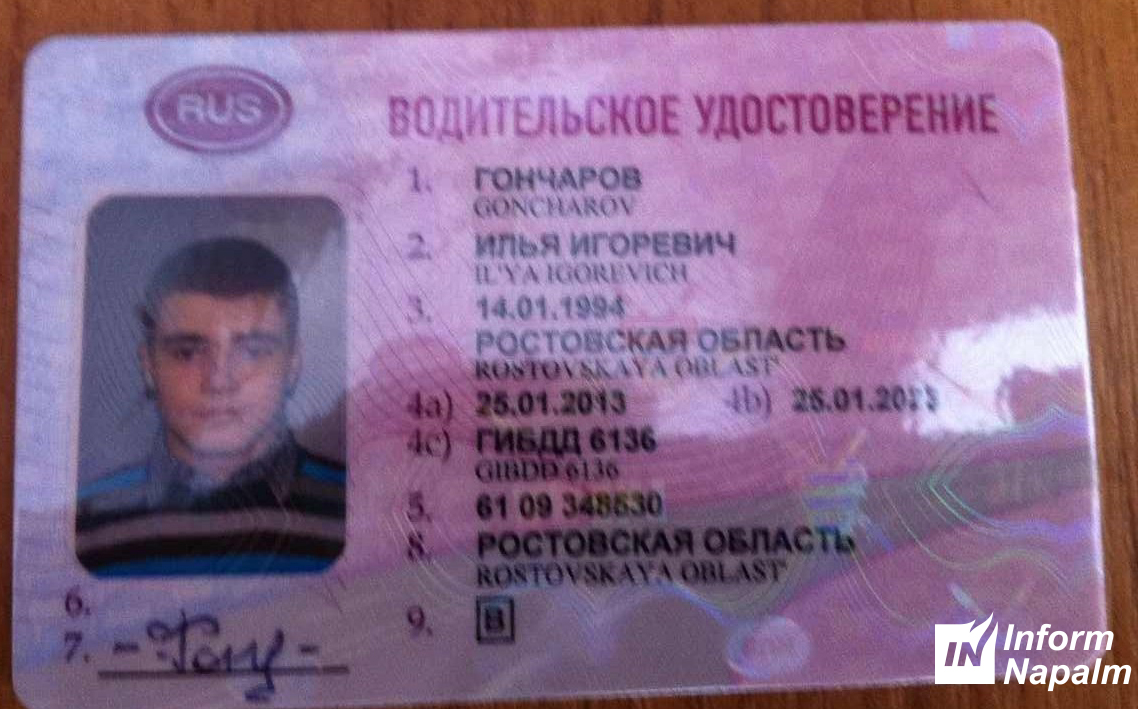 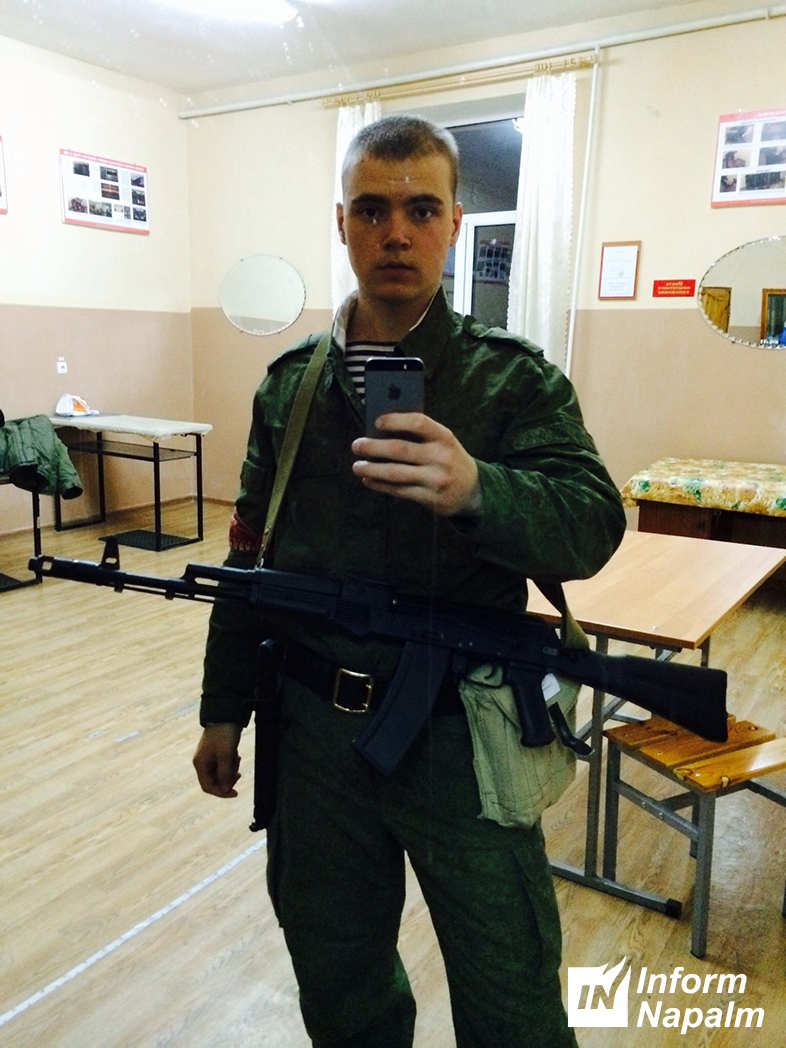 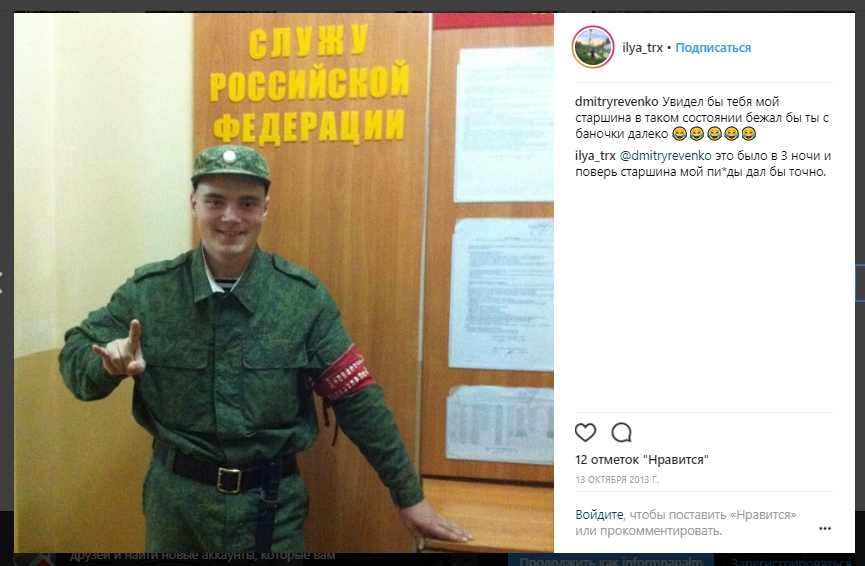 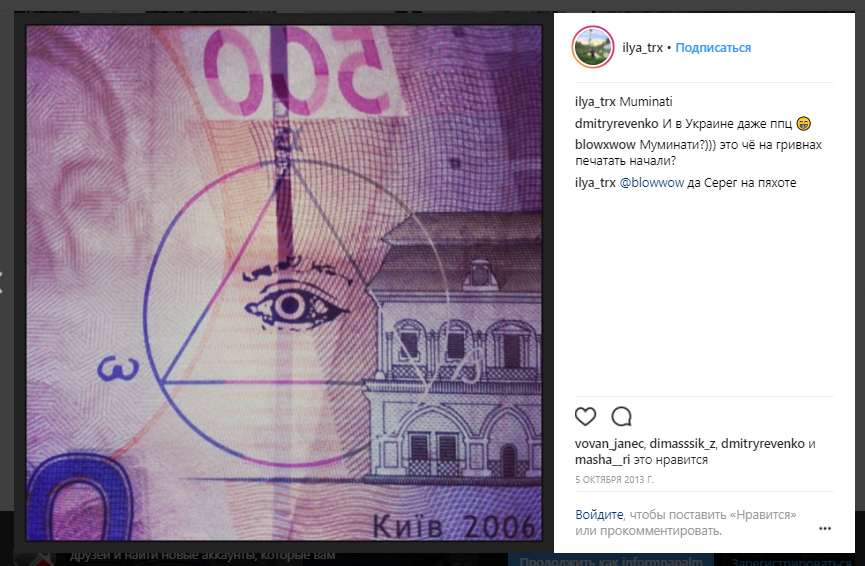 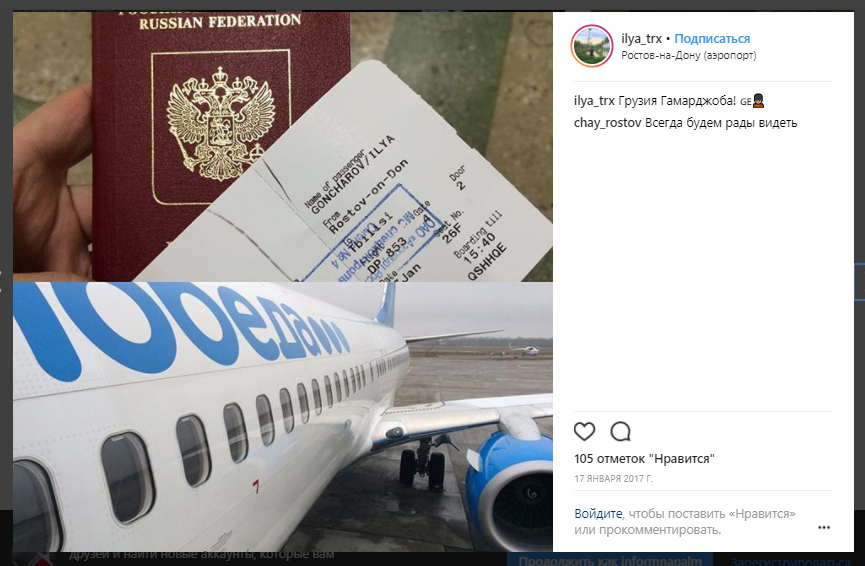 Born on May 15, 1993 in Rossosh, Russia. He did his conscript service in the 810th Marine Brigade of the Black Sea Fleet. He also posted online his award certificate for the medal for the occupation of Crimea. 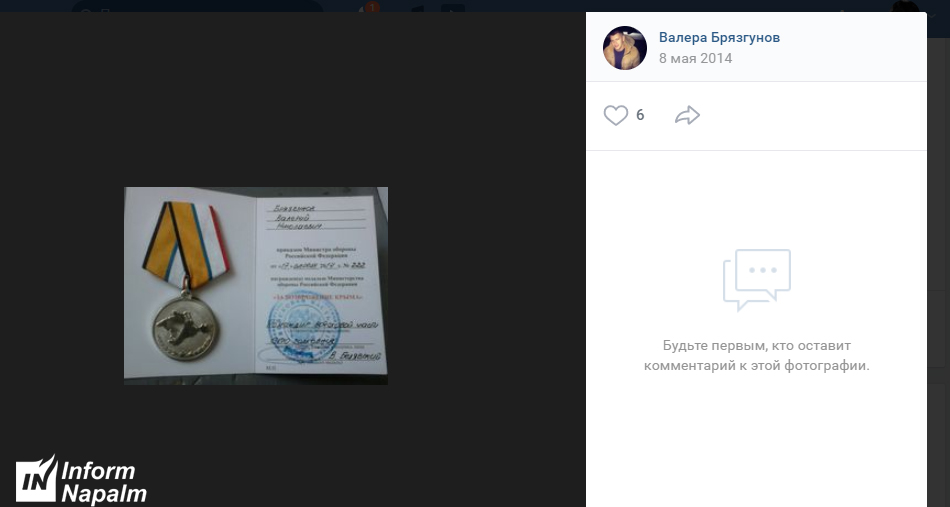 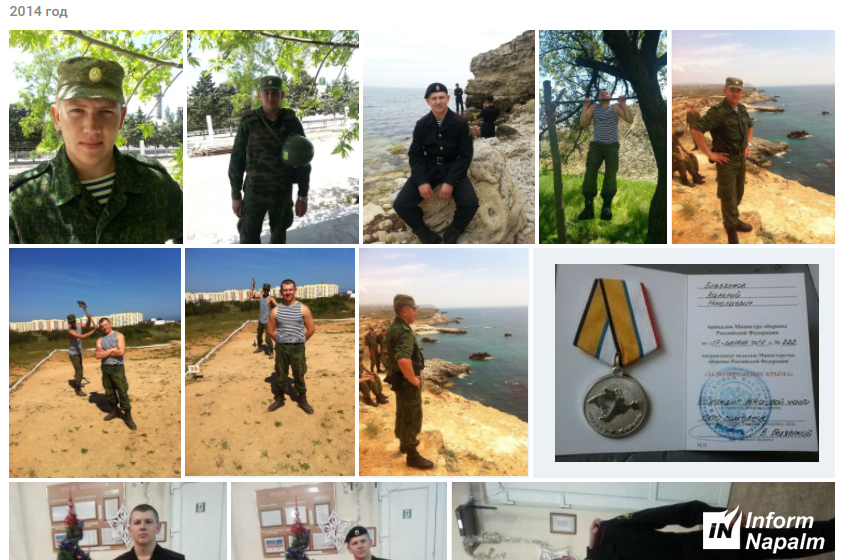 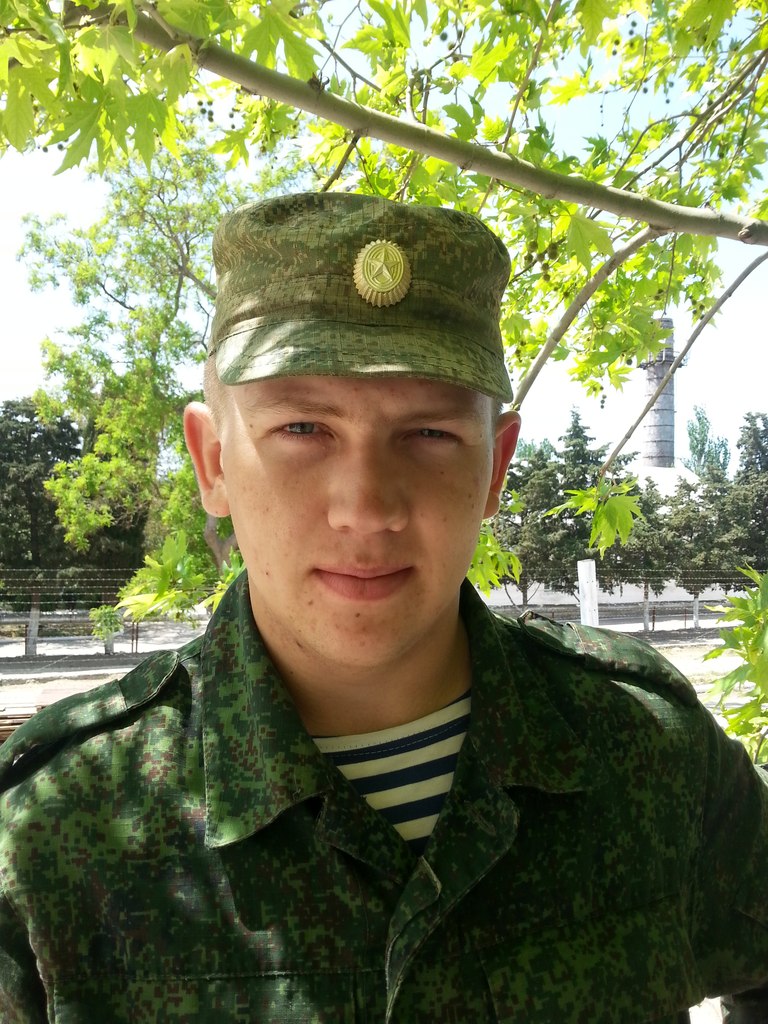 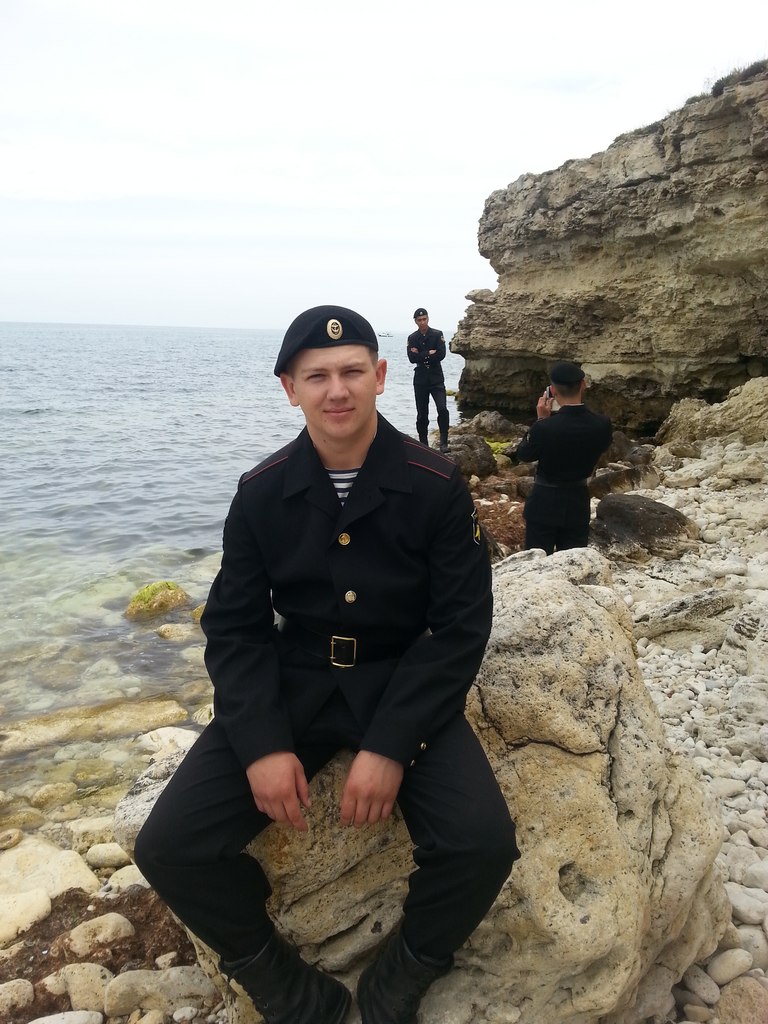 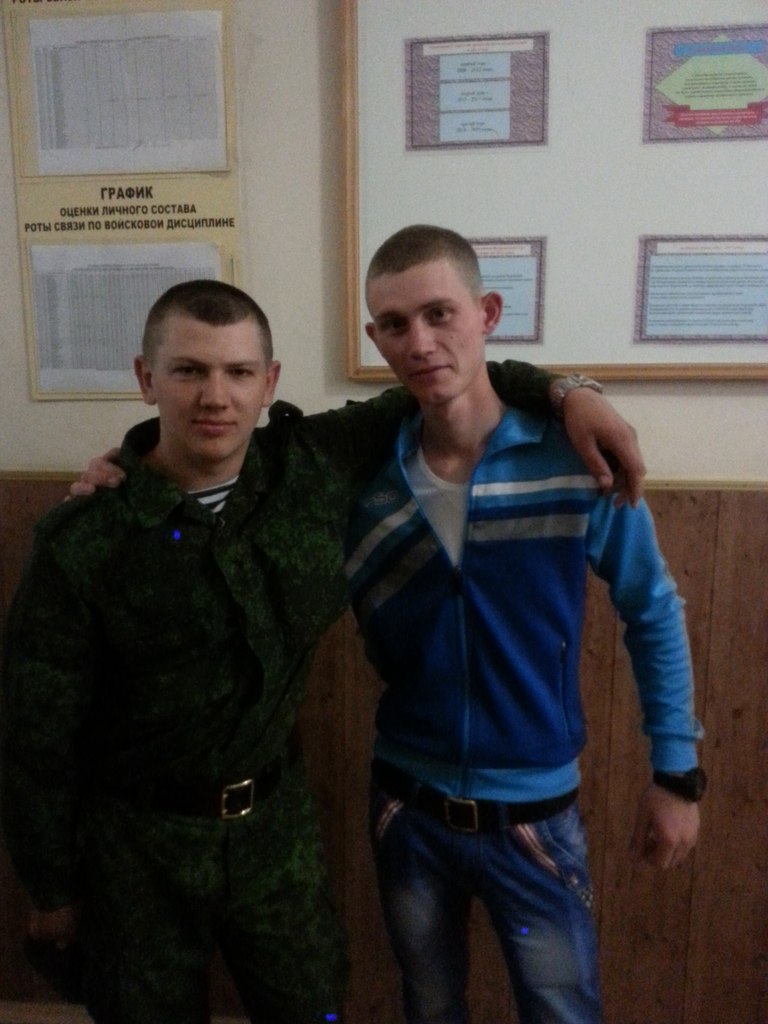 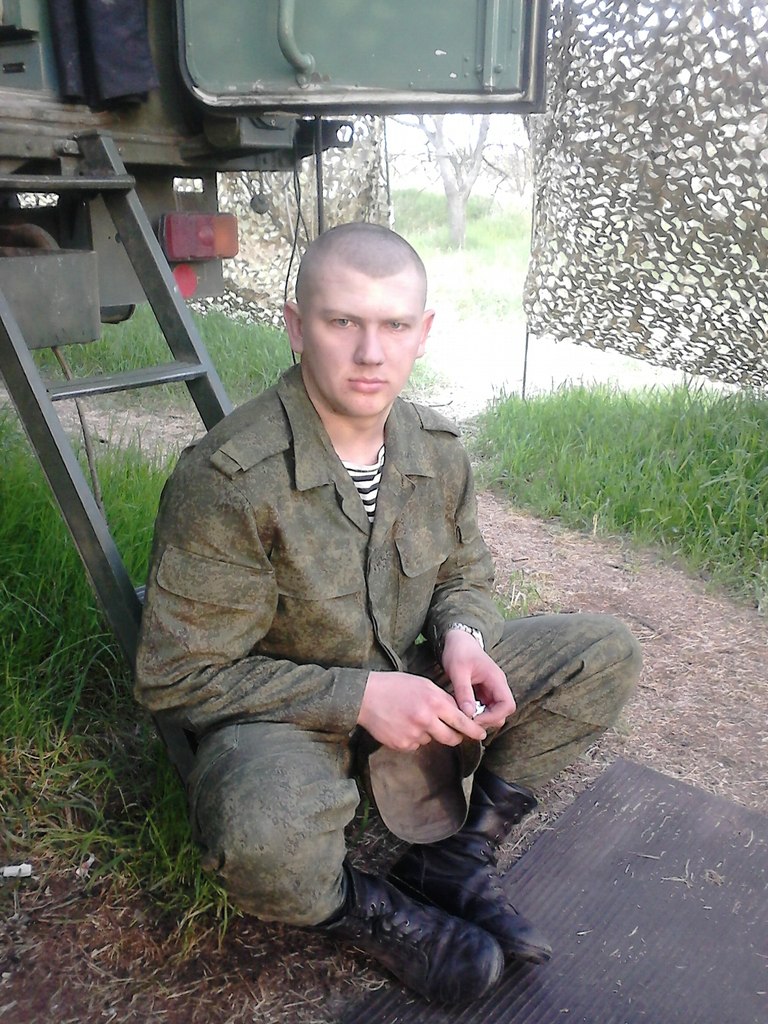 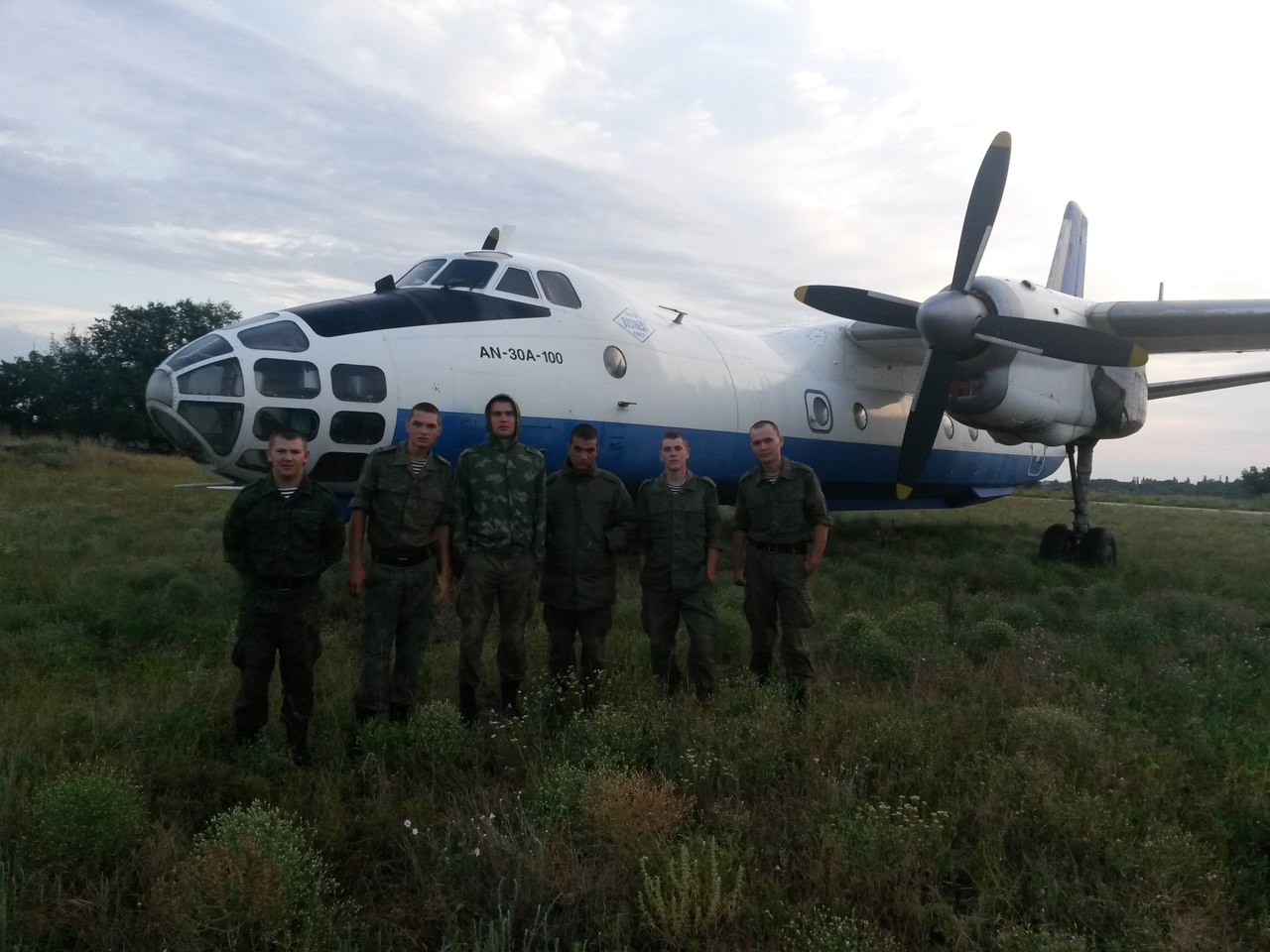 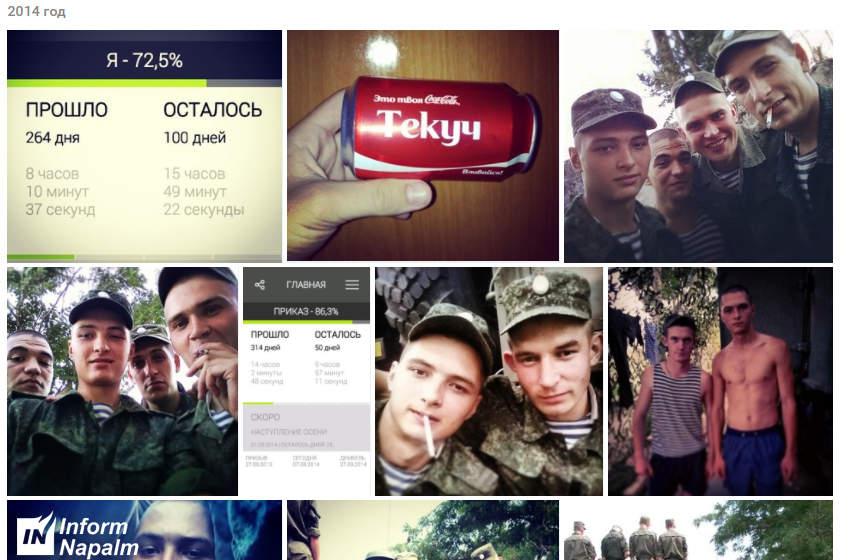 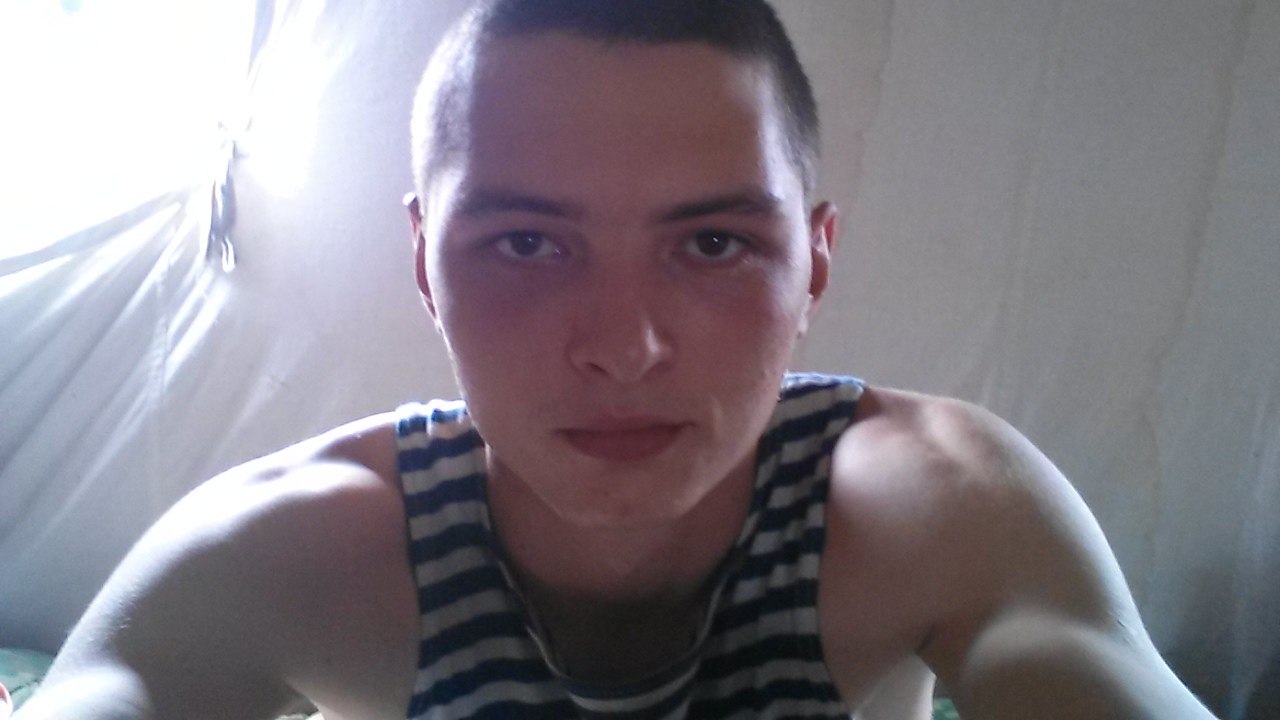 Tekuchev was also identified in several group photos in Valeriy Bryazgunov’s album, which were taken during their service time. 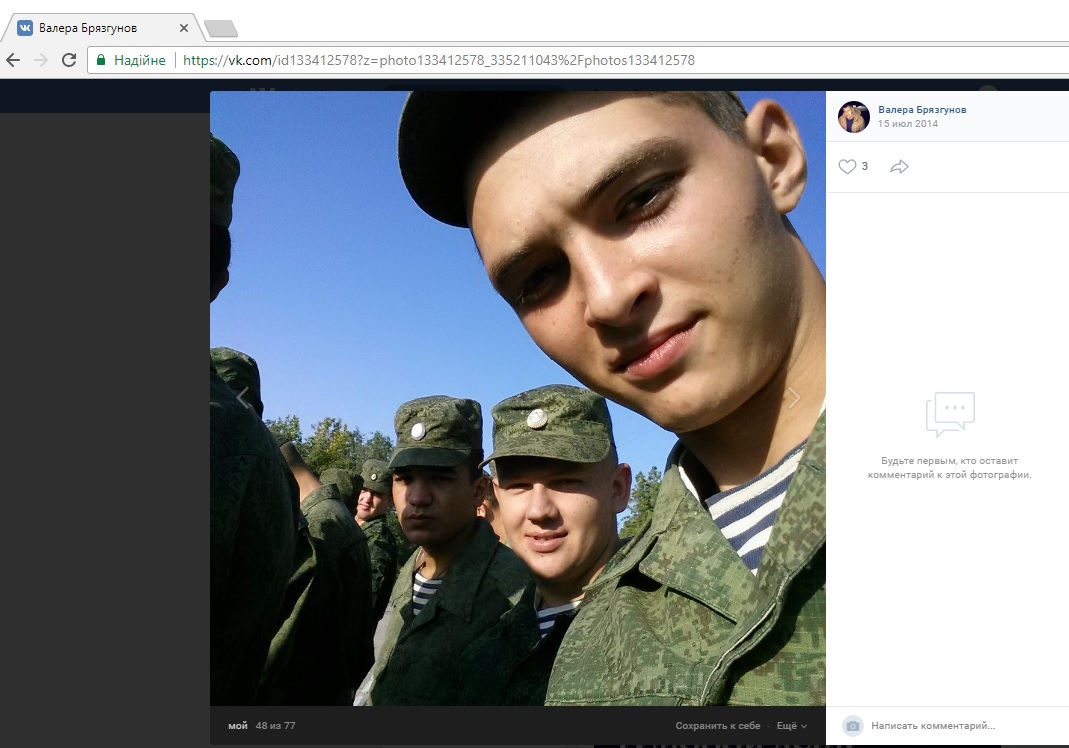 He has the same photo in his own album.

Tekuchev did not post a photo of the certificate for the medal for the occupation of Crimea, but his social network pages have some pictures of him wearing this medal. 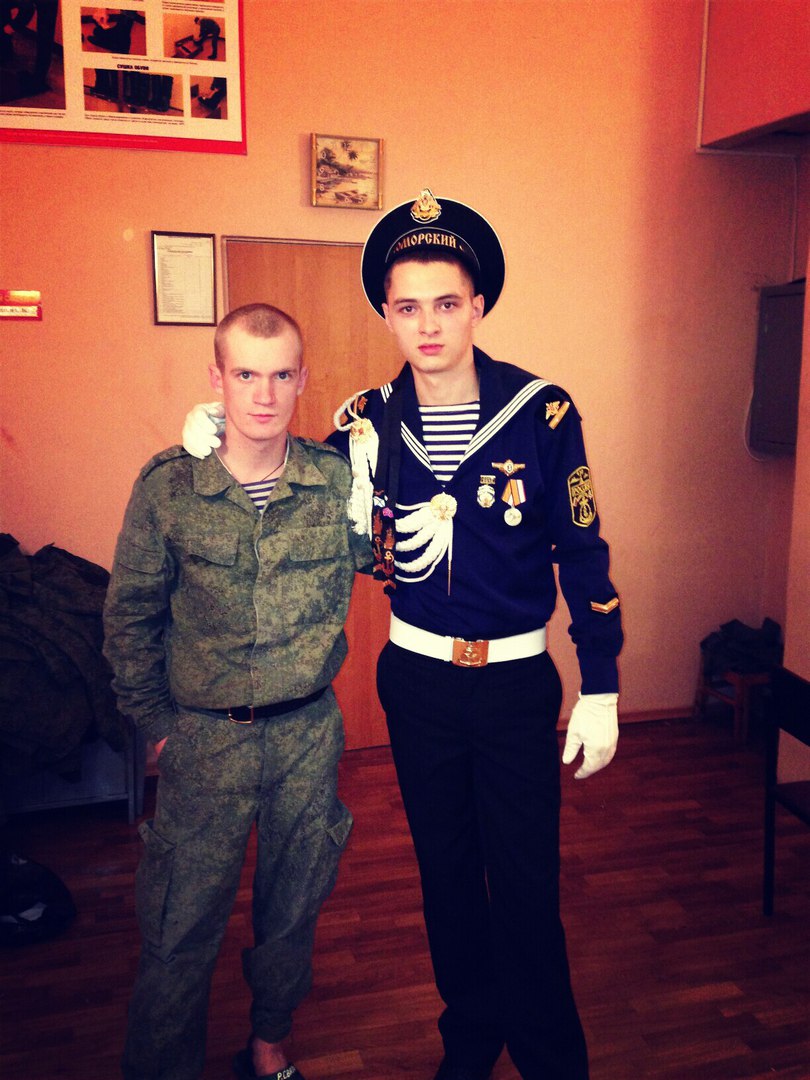 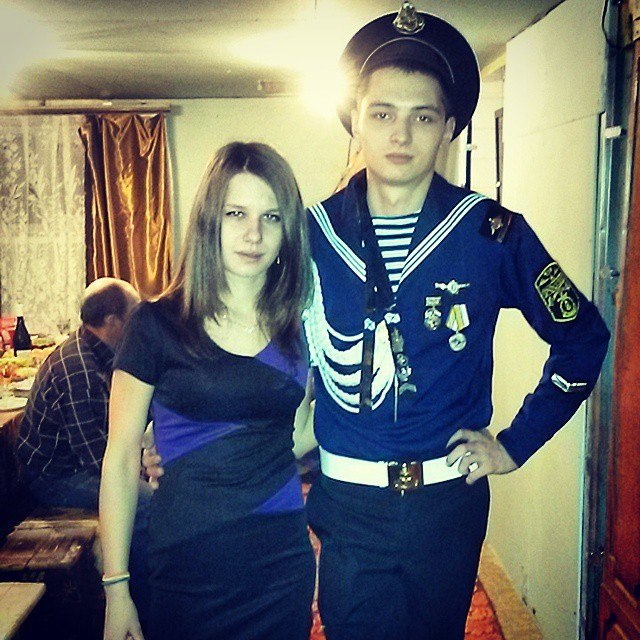 In addition, he has a photo dated March 2014 taken near a command vehicle. Judging by the caption, it was taken in Sevastopol when the fake “referendum” was taking place during the occupation of Crimea. 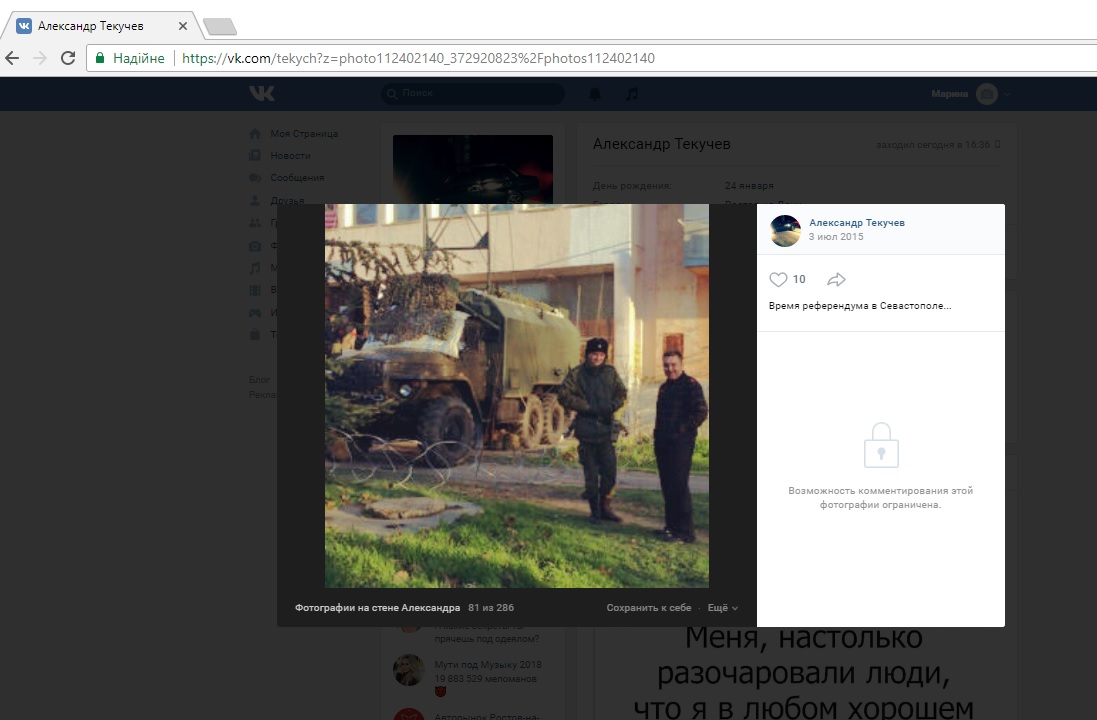 For more systemic information about all the Russian Army units, whose participation in the aggression against Ukraine, Georgia and Syria has been proved by the InformNapalm volunteers, check our Russian Aggression database.