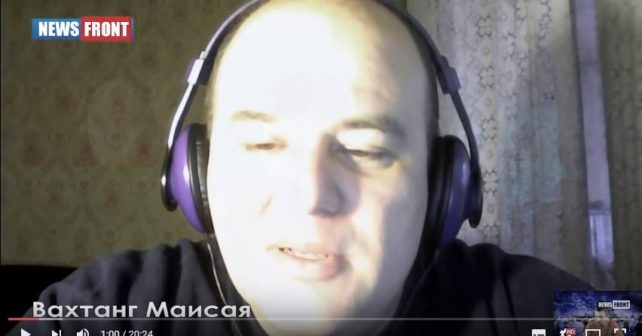 Process of normalization of relations started by Georgian government with Russian Federation is used by Kremlin to make so called the Fifth Column more operative and expanded in Georgia. Unlike previous years, Russian so called the Fifth Column is no longer abstract – their representatives implement not only covert destructive activities, but conduct information-psychological operations by means of popular televisions and newspapers.

Intentions are more than obvious – intimidation of Georgian population and replacement of threat of Russia as a real and primary threat for Georgia by exaggerated and in most cases fictional “threats”. Aim of Kremlin is clear – forcing Tbilisi to collaborate with Moscow, since Russia understands that none of the governments is able to acknowledge “new realities” and expand relations with Russia. Therefore, it is necessary to provide a strong push; relevantly Kremlin is trying to put forward so called the Fifth Column “experts” helping Moscow to solve its own problems through disseminating most recent “sensational information”.

It is thus worth noting that “expert” Vakhtang Maisaia has recently become more active enjoying his own ambitions and love for money, though having not a good reputation.
Presently, Maisaia is calling himself as an expert in terrorism issues and periodically releases sensational information from the “sources close to Islamic State”. “Special unit was set up in Islamic Caliphate comprising of 600-700 warriors. Mainly, they are foreign citizens to make their movement to various countries easier. Number of 600-700 people – is a pretty serious power…..Hybrid war conduction center has been established. The formation noted above is a subordinate part of this center….Georgia and North Caucasus are in the area of their interests”– says Maisaia in an interview given to “Resonance” (local newspaper) a few days ago. It is no doubt true that the information is certainly sensational; however what are the facts proving Maisaia’s statement? Nothing, absolutely nothing. Moreover, Maisaia’s information is illogical. Currently, “Islamic State” is seriously weakened; they are losing their positions on a daily basis in Syria and Iraq, therefore, they are incapable of forming a new unit, especially for Georgia and North Caucasus, as these regions are not the main priority areas for them.

However, dissemination of precise information was not Maisaia’s goal. He has successfully performed his task – once again he has raised nonexistent terrorism threat in Georgia and to say the least gave the topic to Russia to talk about. Based on Maisaia’s “sensational information”, a long article was published on Russian news portal “Svobodnaya Pressa” entitled as: “Special Unit of Islamic State is attacking through Georgia”. Surely the issue was caught on by English-speaking portals being under Russian influence depicting the concern in more radical way. Moreover, one of the websites published an article with the following headline – “Georgia – Transit Corridor for Islamic State?“. Apart from Maisaia, Russian media quoted the statements of other Georgian “experts” for making a focus on the mentioned issue. Furthermore, Mamuka Areshidze proves that “Islamic State” groups are already active in Georgia (!!!). Besides, Russian media focused on “nonsense-assumption” of David Nemsadze, the former military serviceman, who says that the warriors of “Islamic State” serve in the Georgian Armed Forces. D. Nemsadze, resigned from Georgian Army for non-manual relations, is trying to call society’s attention to sensational announcements. Iosef Zaalishvili, who named himself as an expert in Near East and terrorism issues and Journalist Irakli Kordzaia, who is “fighting for restitution of justice”, helped Nemsadze in dissemination of his own “nonsense”.

Consequently, Russian media has successfully managed to put forward the “problem” of Pankisi Gorge and tried once more to prove the fact that threat of terrorism really exists in Georgia. Russia, instead of paying attention to its own North Caucasus with growing terrorism activities, focuses on Pankisi Gorge and tries to depict the region as a terrorism center. However, the traveling of Russian journalists in the Gorge and their attempts of seeking the warriors of “Islamic State” were unsuccessful. This does not present an obstacle for Russia at all – Moscow has activated “the threat of terrorism coming from Georgia” in the information space using both Georgian so called expert-journalists and “high officials” of so-called South Ossetia and Russia, who are periodically making statements on the mentioned issue. Several days ago Gregory Karasin, the Deputy Minister of Foreign Affairs of Russia clearly defined the aim of the mentioned information campaign. In his interview with the “First Channel” of Georgia he said that Kremlin desires to cooperate with Georgia in the issues related with terrorism. In addition, the same day Karasin raised this issue during negotiations with Zurab Abashidze in Prague. This was unexpected for Georgian side, because the format did not consider discussion of such issues.

The goal of Russia is clear – on one hand, to show terrorism threat to Georgia and ideological work on Georgian population. This will make official Tbilisi compelled to start collaboration with Moscow, and on another hand, Moscow is trying to discredit Georgia on international level. In case of necessity, this will enable Russia to justify its aggressive steps and make them “legitimate” as efforts for fighting terrorism. The so called Fifth Column, operating in Georgia, is actively supporting Kremlin to solve its own problems. The mentioned Column is publicly conducting destructive activities posing threat to national security of Georgia. Meanwhile, State Security Service of Georgia is “on leave”.

See also: Adherents of the “Russian world” get more active before the elections — Georgian Clogging

This material was prepared for publication by Aleksandr Lomsadze specially for InformNapalm.

One Response to “Georgian ‘Experts’ at Russian Services”