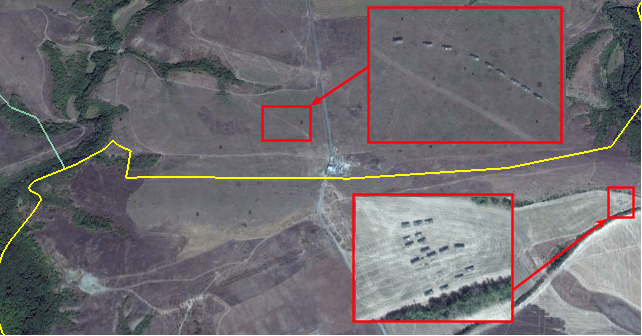 In August of 2014, there were many talks about the ‘humanitarian aid’ granted by Russia to Donbas, which was ‘protected’ by the separatists from the Ukrainian soldiers. Against the will of Ukraine, which explicitly spoke out against such ‘humanitarian convoys’ (about the contents of which we could only guess), the bulk trucks moved to Donbas anyway. However, InformNapalm once already provided convincing evidence of who exactly accompanied such ‘convoys’ under the guise of EMERCOM [Ministry of the Russian Federation for Affairs for Civil Defense, Emergencies and Elimination of Consequences of Natural Disasters]. Strangely, but exactly at that moment, at the end of August of 2014, the situation changed in favor of the ‘separatists’ who unexpectedly found plenty of allegedly captured modern weapons and equipment.

However, the ‘humanitarian convoys’ is not the end of this story. In the current investigation, we present you the photo-evidence of how Russia concentrated the military equipment in close proximity to the border of Ukraine, the columns of which then entered Ukraine on the sly and provided a subsequent change the situation in favor of the so-called ‘separatists’, but in fact in favor of the Russian Federation.

In this article, we will conduct an analysis of the GoogleEarth images of the Ukrainian-Russian border, which were made in early September of 2014.

The GoogleEarth service’s satellite image below, dated on September 4, 2014, shows the placement of military equipment on the Russian territory in close proximity to the Ukrainian border and the ‘Marynivka’ border checkpoint. Twenty four units of the military equipment were placed behind the wood line. The yellow line marks the state border. 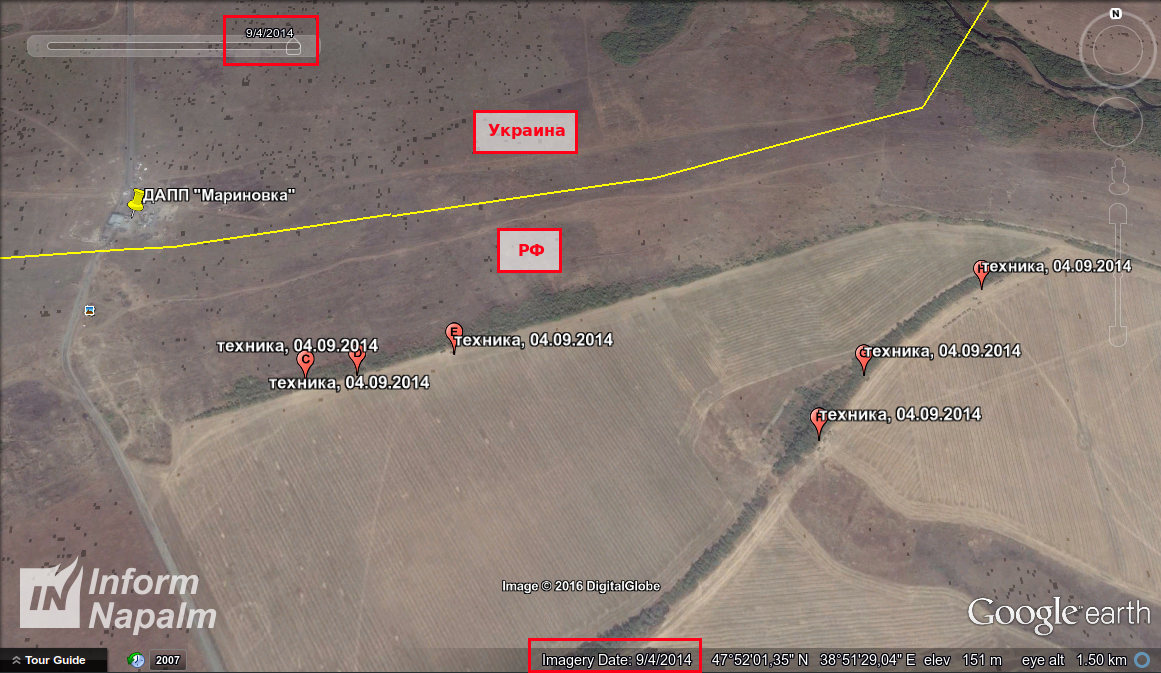 Below are the enlarged screenshots of the marked areas C, D, E, F, G and H. You may click on the image in order to increase the picture. 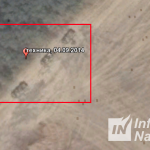 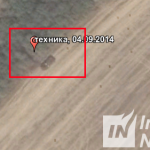 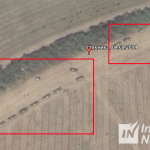 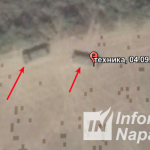 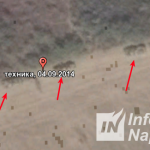 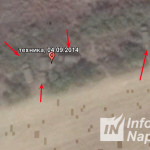 Let me remind you that at the beginning of September, 2014, the ‘Marynivka’ border-crossing checkpoint and the ‘Bravo’ strategic height in the north, which was kept by the units of the Ukrainian 79th Airmobile Brigade, were captured by the Russian-terrorist forces.

An interesting fact is that the GoogleEarth service contains a snapshot, dated on September 5, 2014, which presumably was made the day after the above satellite image. At the point А (47°52’6.88″N  38°51’18.66″E) we see a convoy of ten military vehicles, which turned to the north-west from the ‘Marynivka’ border-crossing checkpoint and are moving into the territory of Ukraine. Presumably, there are a military truck and eight military vehicles in the column, the ninth machine likely is on the patrol and covers the column’s movement. By the way, such military unit as a motorized rifle company includes nine or ten combat vehicles (ten vehicles in case if the company commander has a dedicated armored fighting vehicle). Machinery from the points C, D, E, F, G, H in the amount of twenty four units are now concentrated near the point B (47°51’54.59″N 38°52’36.39″E), but in the picture we already see only seventeen units. 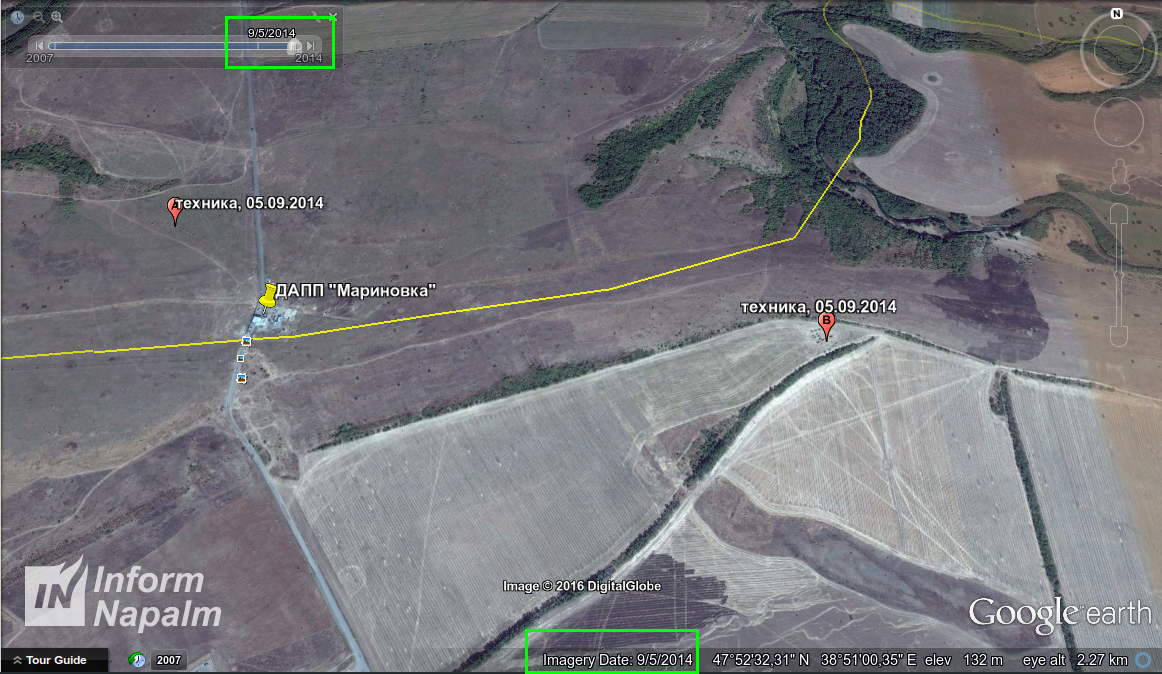 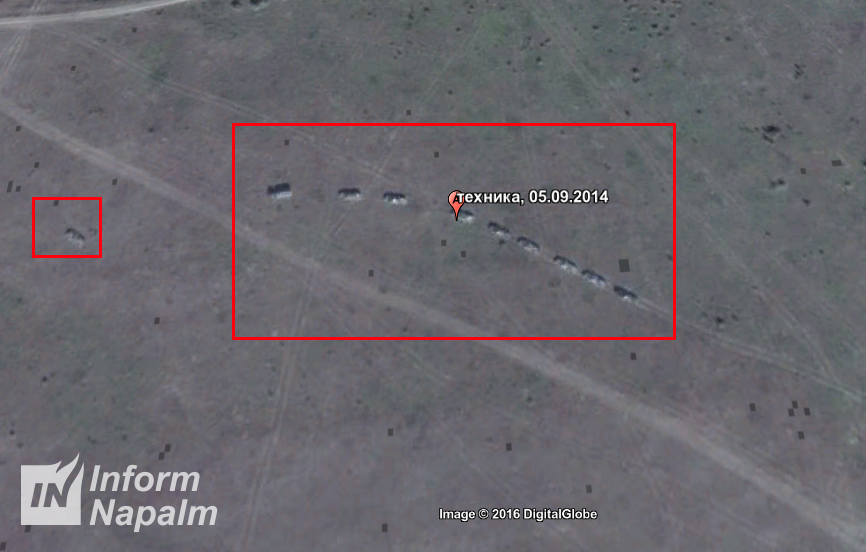 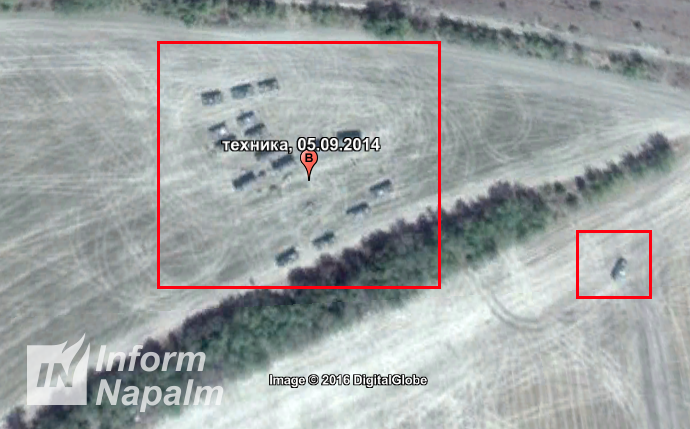 It should be noted that in the satellite images, dated on September 4 and 5, the equipment on the Russian territory is visually identical to the machinery columns in Ukraine. 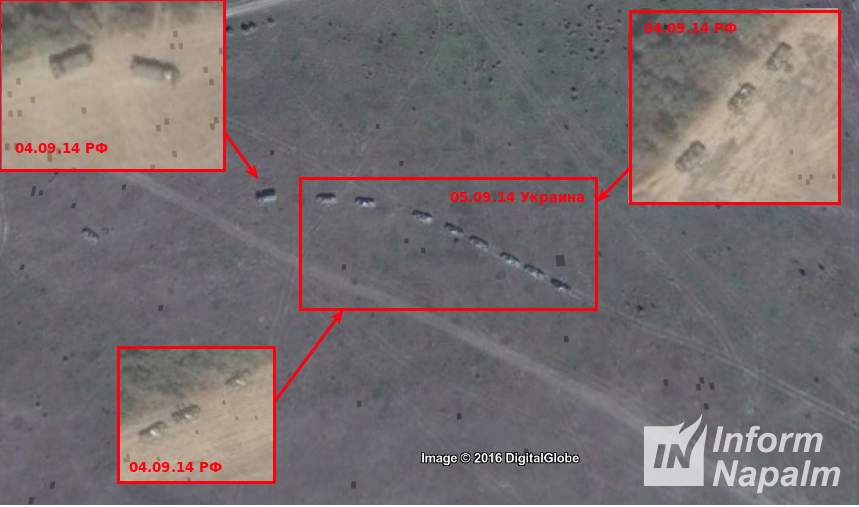 Thus, once again we brought evidence that the mythical ‘trophy’ military equipment of terrorists in Donbas had a very definite origin (and still has it). However, the fact that the Russian Federation is a supplier of terror is not a novelty, if we look at the history of its neighboring countries for the last 24 years…

Let us remind that the database, which contains the InformNapalm investigations, which prove participation of more than 60 military units of the Russian Armed Forces in the fightings in Ukraine, is available via this link.

We invite the readers to actively share our publications in the social networks. Making the investigation materials publicly available is able to turn the tide of the information and battle confrontation. Together we will win!