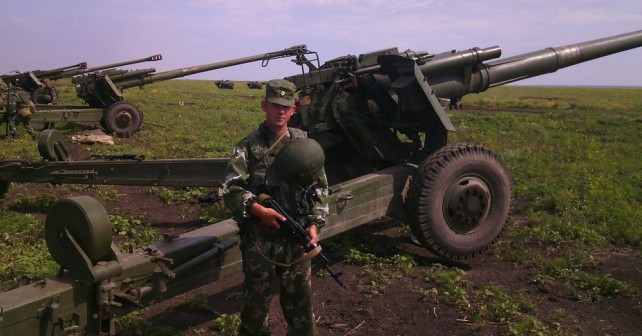 In one of our previous investigations (“Google Earth Reveals the Secrets of the Machinery ‘Captured’ by the Terrorists“) we demonstrated how the Russian equipment was transferred to the combat sites through the uncontrolled sectors of the Ukrainian border.

The current investigation identifies weapon systems, firing directions, supply routes and the traces left after the shelling. War crimes have no limitation period, so we will look at the map of the border area in September – October of 2014: satellite images of those areas keep many interesting details about shelling performed from the territory of the Russian Federation on the Ukrainian settlements of Marynivka, Pervomayskiy, Stepanivka and others in August, 2014.

It is interesting that exactly these settlements appear in the reports of terrorists and the Russian propagandists. For example, the published on the Russian resource Ruspravda.info article with a cynical title ‘Chronology of the civil war in Ukraine as of August 15, 2014‘ stated that: “The supported by tanks National Guard’s detachments conducted numerous attacks on Marynivka, Stepanivka, Pervomayskiy settlements. During heavy fights, the enemy having vastly superior forces, was driven back to the previously occupied position. Decisive counter attacks of militias inflicted on the foe the heavy losses in manpower and material resources.”

Analysis of satellite images lets us judge about the exact forces which were involved in operations in August of 2014. Google Earth Images witness about not civil confrontation, but the military aggression of the neighbouring state.

This is a screenshot of the satellite image from September 14, 2014. It registered a 6 pieces howitzer battery (two combat platoons), ammo load positions, trucks and a tent. Disposition of the camp – to the east of khutor Primiusskiy, Kuybyshev raion, Rostov Oblast. The coordinates and the date are marked with green rectangle. Since the length of gun’s barrel equals the length of the truck, we can assume that these are 2A65 ‘Msta-B’ 152mm howitzers. Length of such gun’s barrel is 7200 mm. For comparison, length of a Ural-4320 truck is 7366 mm and 7960 mm of a KamAZ-5350 truck. The barrel of D-30 gun is 4660 mm long, so it would be much shorter than the truck. 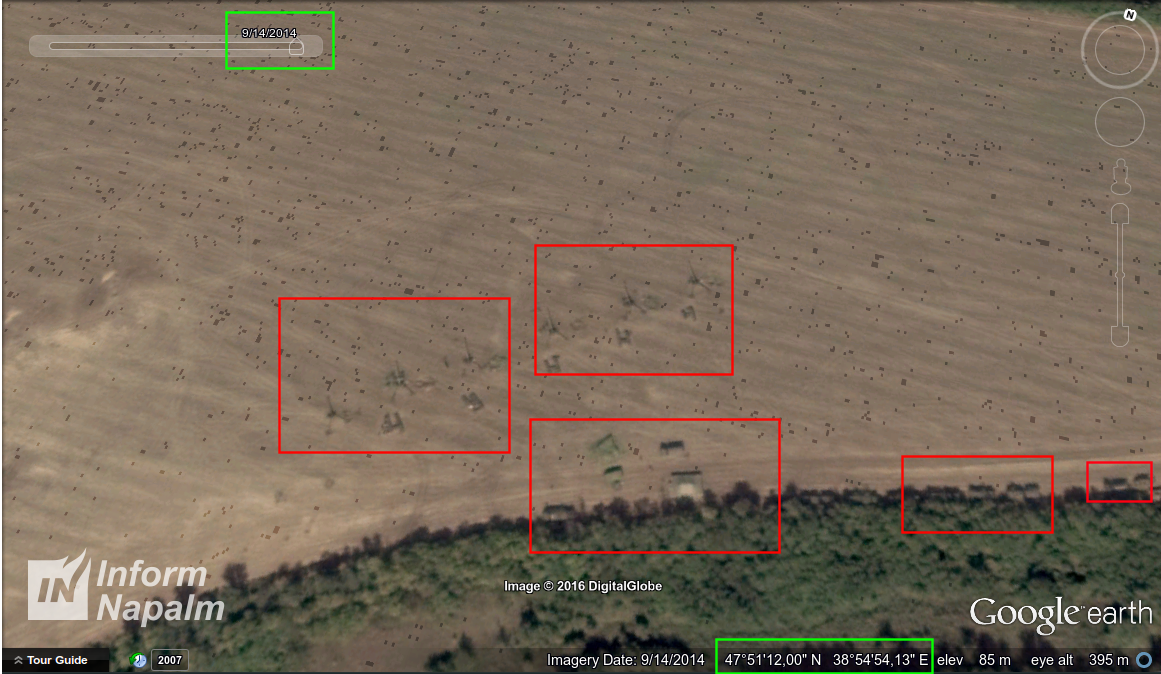 The old firing positions are located a little bit to the left. Interestingly, these positions can be seen in even earlier image from September 4, 2014.You can clearly see that there were 5 guns. 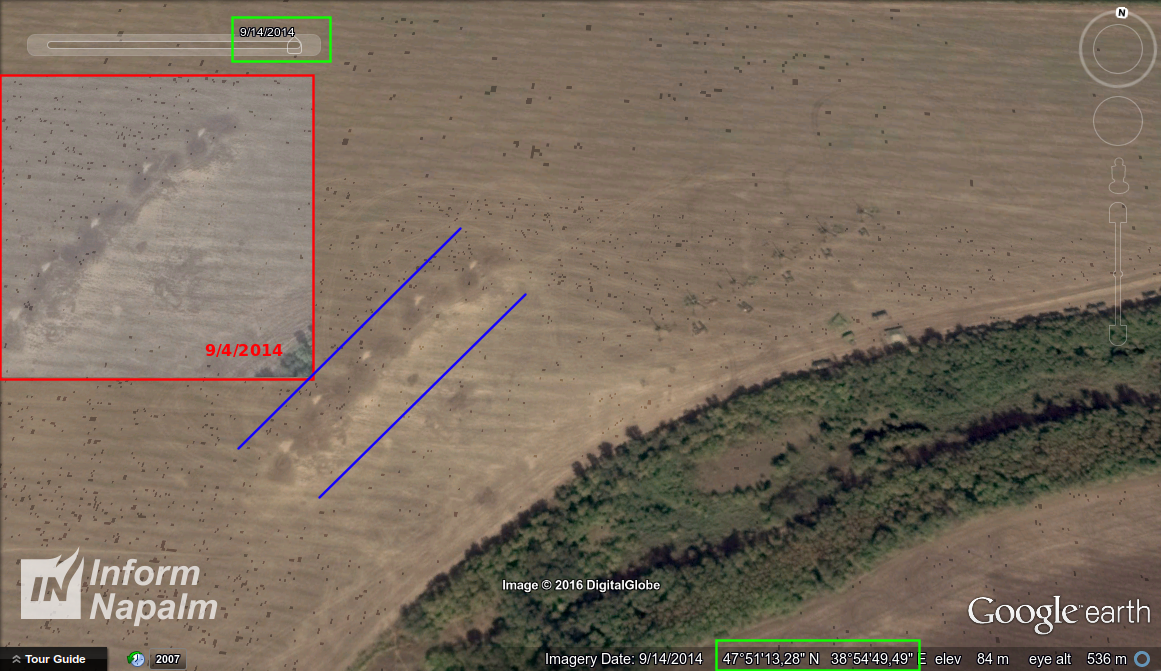 Let’s now check another picture dated on October 6, 2014. Here we can see the burnt and trampled ground (upd: our readers have helped us to determine that the black spots in the picture are the traces of MRLS firings performed from the same position, the direction of fire has not been identified). 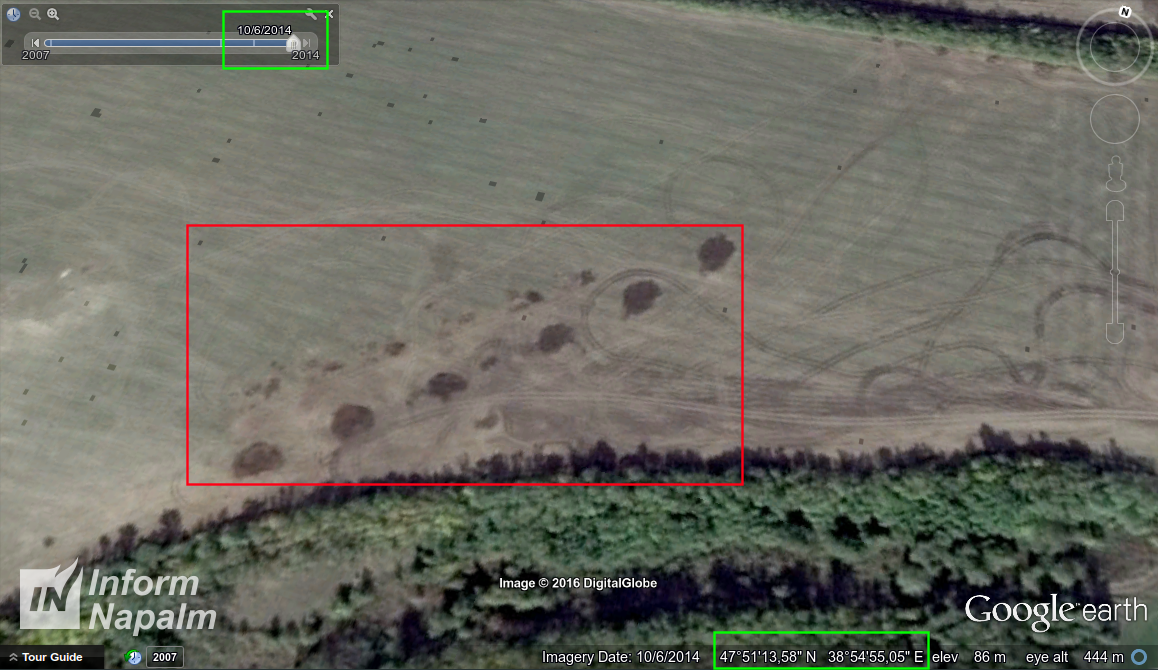 Based on the direction of the barrel of one of the guns, we draw two lines (please note the the map is rotated – the North indicator is in the top right corner). The green one indicates the dead zone, the minimal shooting distance using the normal charge which is 6400 m. The red line is the kill zone, it’s from 6400 to 24700 m. Next we mark the shell craters in close proximity to the red line. Here is what we have got: 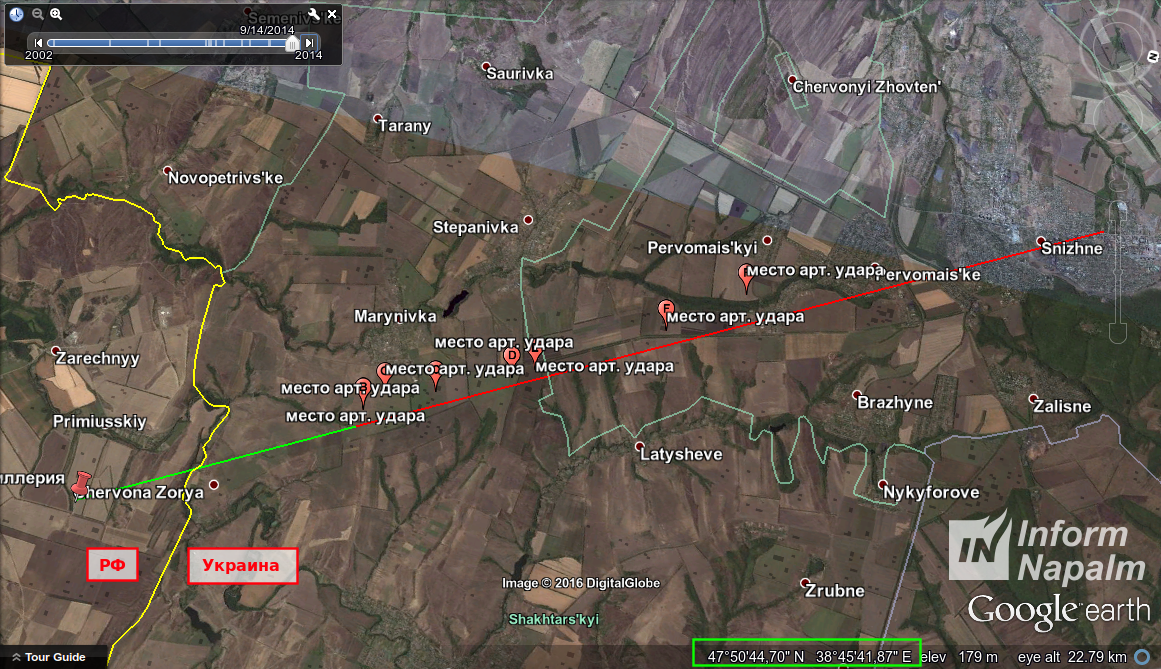 Below you can find the satellite images of the impact areas: 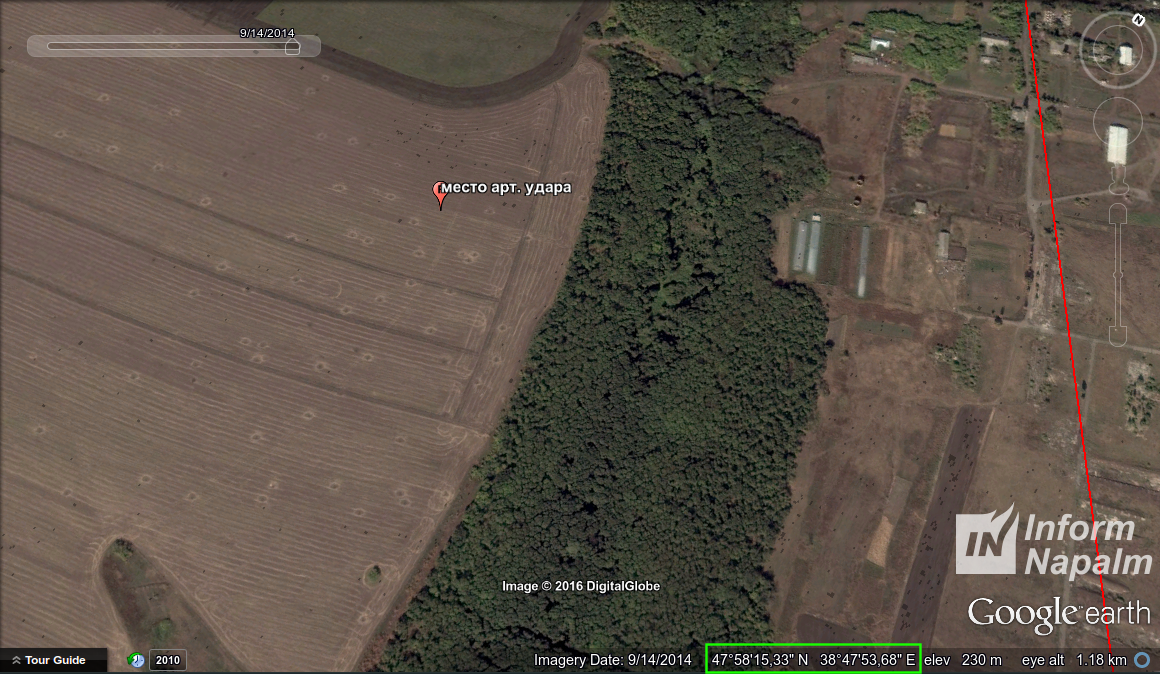 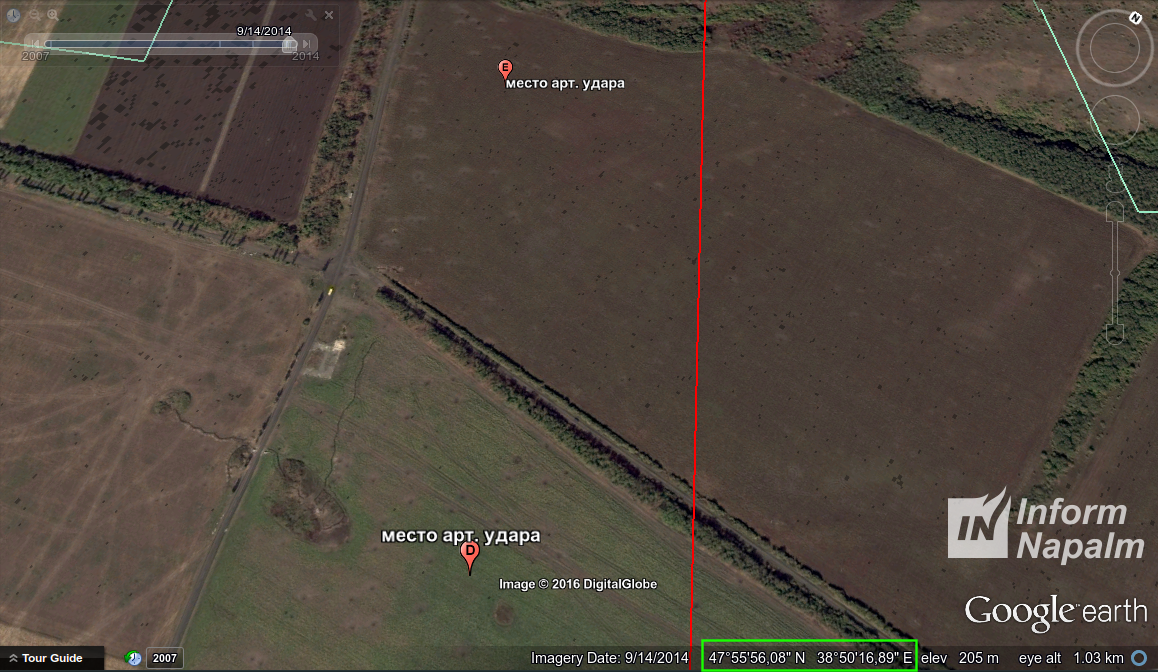 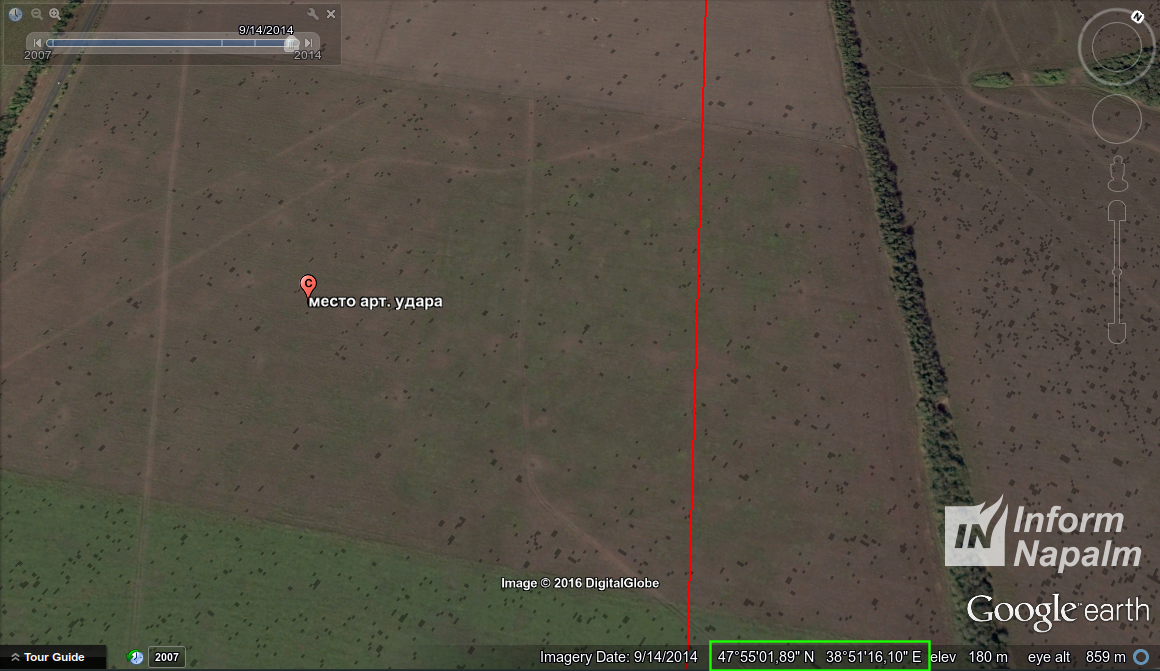 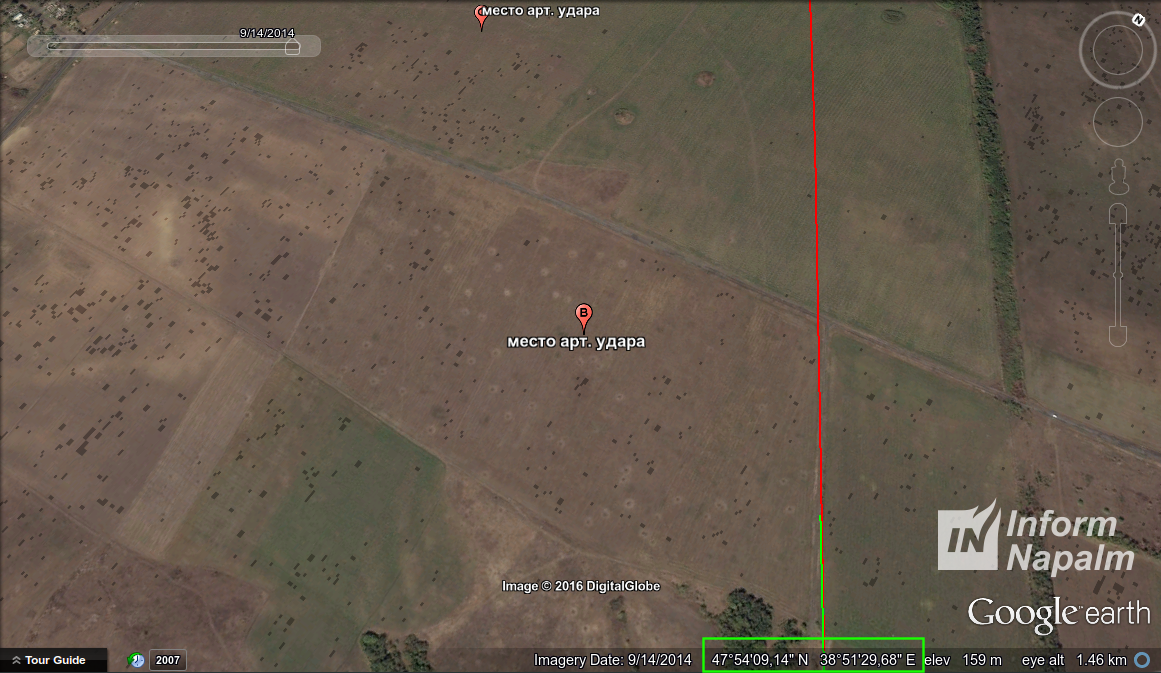 Since the marked craters can be seen in the photos from August 15, 2014, and are shifted to the left from the aiming line (same as the old firing position), we can assume that the shelling was done from the old position as well.

One of the important aspects of the usage of artillery is the ammo logistics. The screenshots below show the supply routes and storage location. 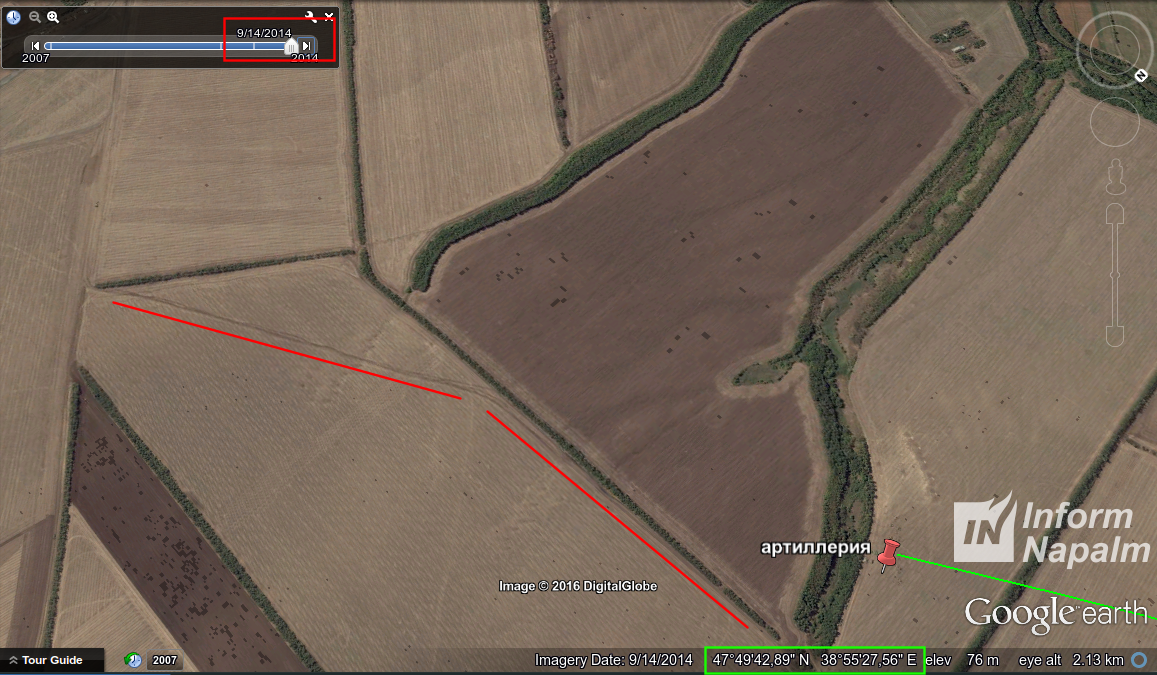 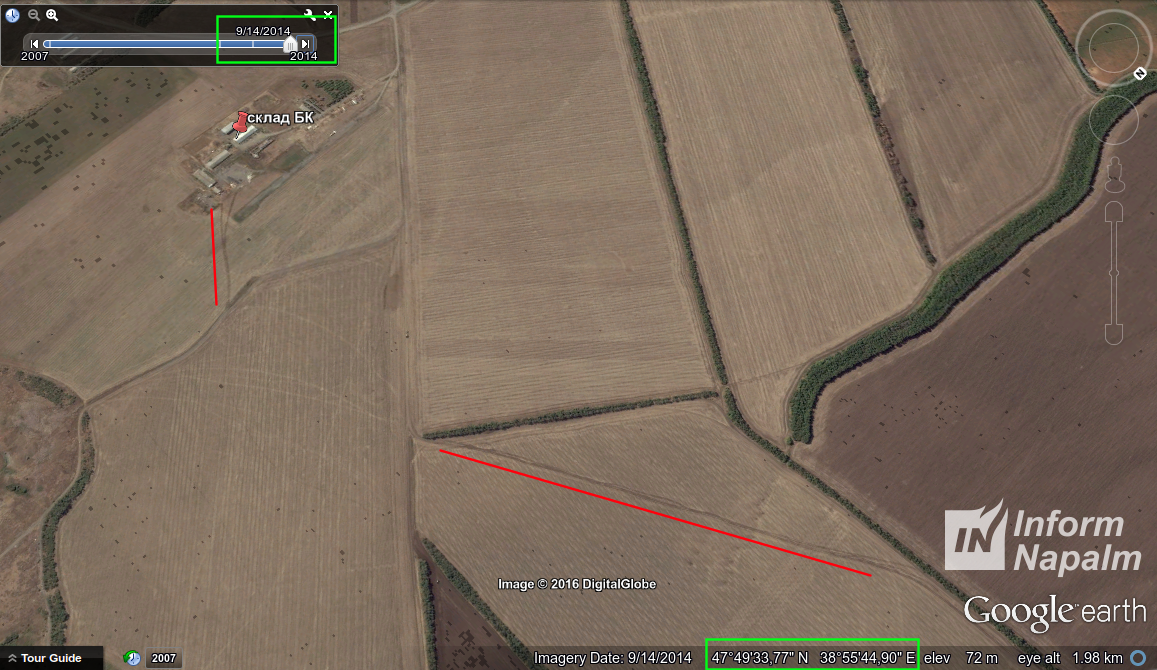 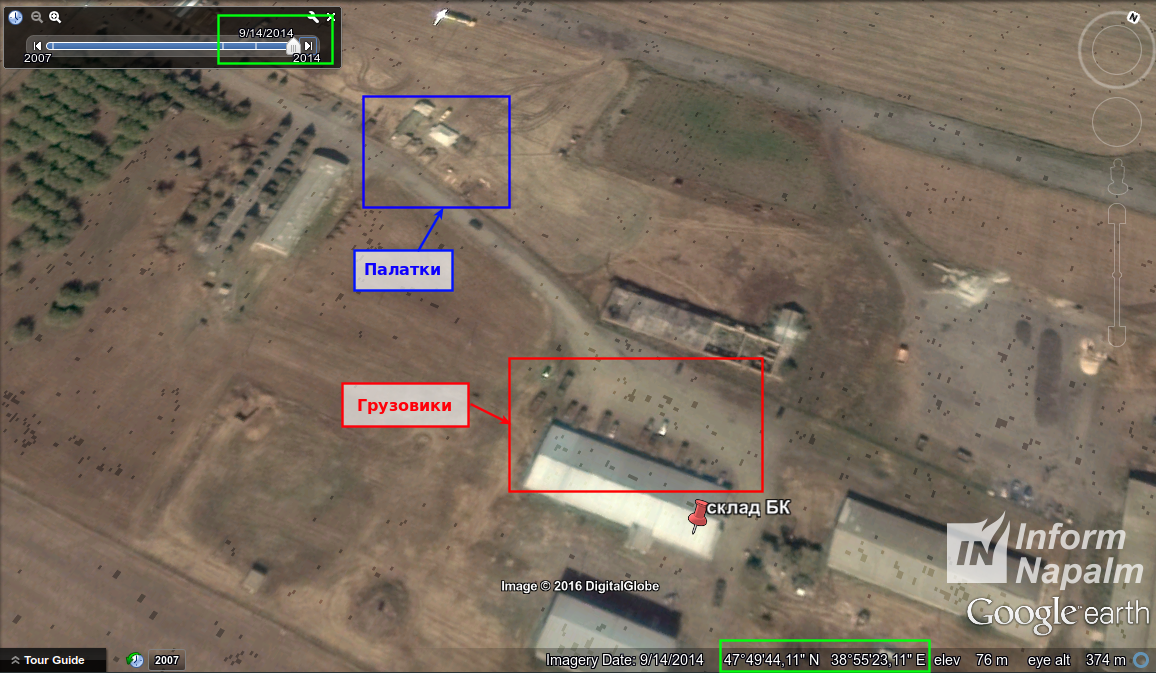 This way, the Russian propaganda’s rhetorics about ‘the victories of Novorossiya’ and ‘civil war in Ukraine’ are just cynical cover of the real aggression of the Russian Federation, which not only supplies weaponry, equipment, mercenaries and career officers, but also conducts artillery strikes over the Ukrainian-Russian border.