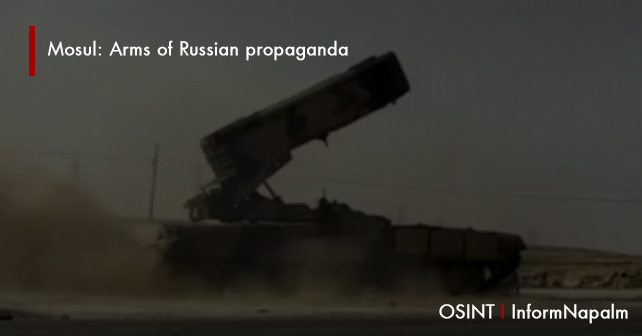 The military operation in the Middle East is used by the Russian Federation to achieve its own geopolitical and ideological goals. The formal war against the militants of the Islamic State in fact has become a testing ground for lethal weapons against the civilian population of Syria and the Russian “experiment laboratory” over the consciousness of Russia’s domestic audience. In this publication, we will briefly discuss the amusing metamorphoses of Russian propaganda that cultivate the image of “bad Americans”. We will show how the words of Russian journalists are sharply dissonant with the picture, of which the unsophisticated viewer certainly does not think.

Since the beginning of the military operation against IGIL in Mosul, which is being carried out by the Iraqi army with the support of a coalition led by the United States, Russian propagandists have decided to use this event for mirror accusations. In the style of the traditional Russian hypocritical diplomacy, Russian TV channels are trying to compare the situation in Iraqi Mosul with the one in Syrian Aleppo.

During the last 6 months, central Russian television channels pour in prime time on the heads of their viewers stories about Iraqi Mosul destroyed by the coalition troops. Each episode is accompanied by a video clip, in which the following set of elements is necessarily present: the ruins (it is clear why, but it is not clear exactly where), civilians creeping between the ruins, and passing Hummers (these cuts are inserted by propagandists for lack of opportunity to demonstrate real combat equipment of the coalition). But the most important element of the popular picture from Ostankino about Mosul is the shots of shootings with no-comments, in which Russian weapons and equipment unexpectedly appear. These stories go under the shouting headlines: “Mosul is on the verge of a humanitarian catastrophe!”, “A burial of victims of the strikes by a coalition led by the US was found in Mosul”, etc.

Taking a closer look at the images of the strikes, one can understand what these stories are worth. They show attacks by unspecified armed forces on unknown targets at locations somewhere in the Middle East. That is, it could be Iraq (but not the fact that Mosul) or maybe even Syria. The only thing that can be said for sure is that the attacks are inflicted with heavy weapons delivered to the area by Russia itself.

Let’s look at several screenshots from the stories of Russian TV channels, which, in pursuit of a “sensation”, feature interesting weapons.

A story by First Channel shown on February 28, 2017: “Iraqi Mosul is on the verge of a humanitarian catastrophe.” 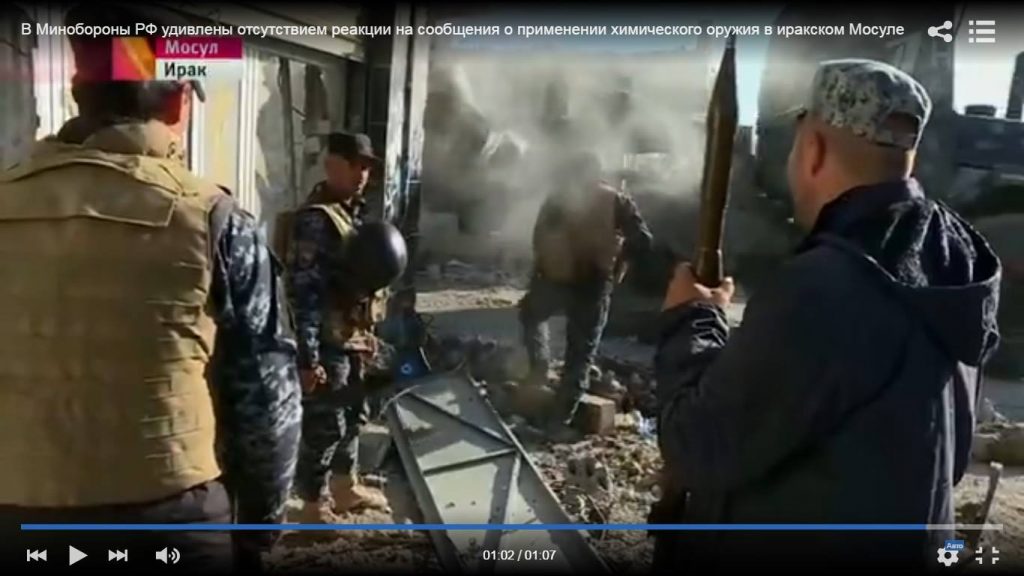 Another story by First Channel on March 11, 2017: “The Russian Defense Ministry is surprised by the lack of reaction to reports of the use of chemical weapons in Iraqi Mosul.” And there is a video. 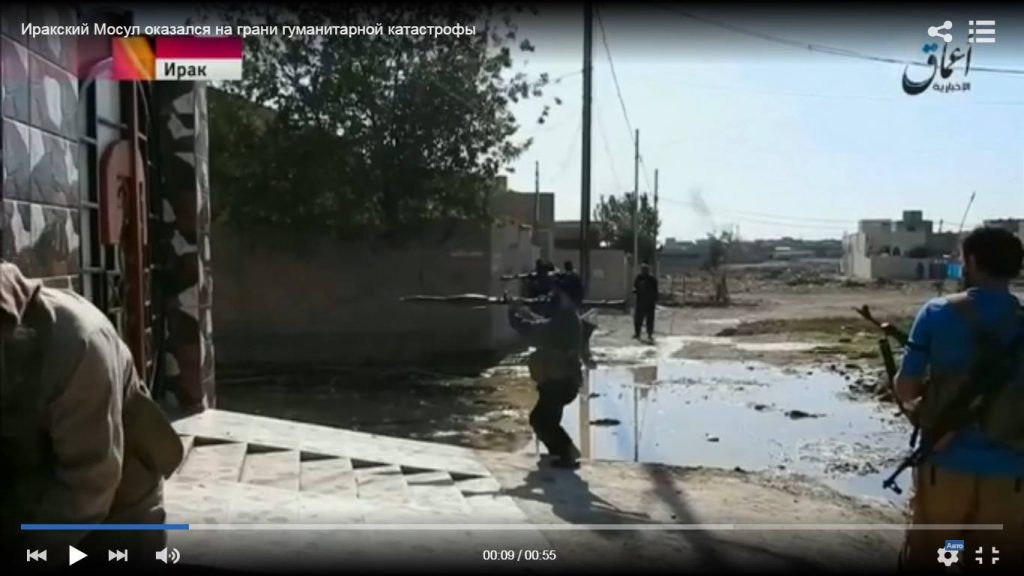 As we see, the stories are different, but the weapons used in the city are the same: RPG-7 hand-held anti-tank rocket propelled grenade launchers … manufactured in Iran. Therefore, if someone can be accused of destroying Mosul, in this case, it is not the US and the coalition forces, but the opposite side, supported by Iran and, of course, Russia. By the way, it strongly resembles the actions of the “Donbas miners”.

And another story by First Channel shown on March 5, 2017: “The Iraqi Army, supported by the Americans, does not abandon attempts to liberate Mosul”. 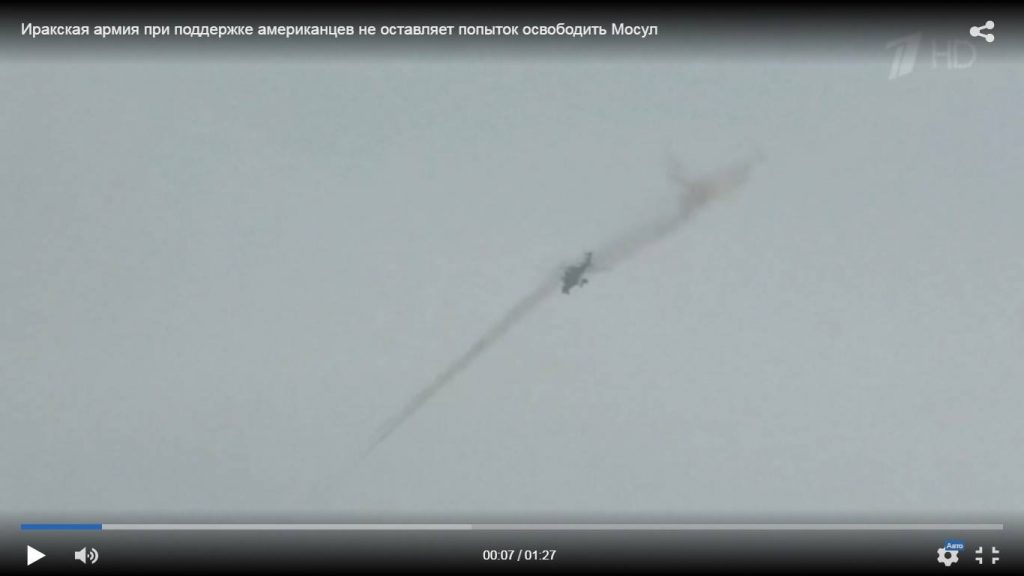 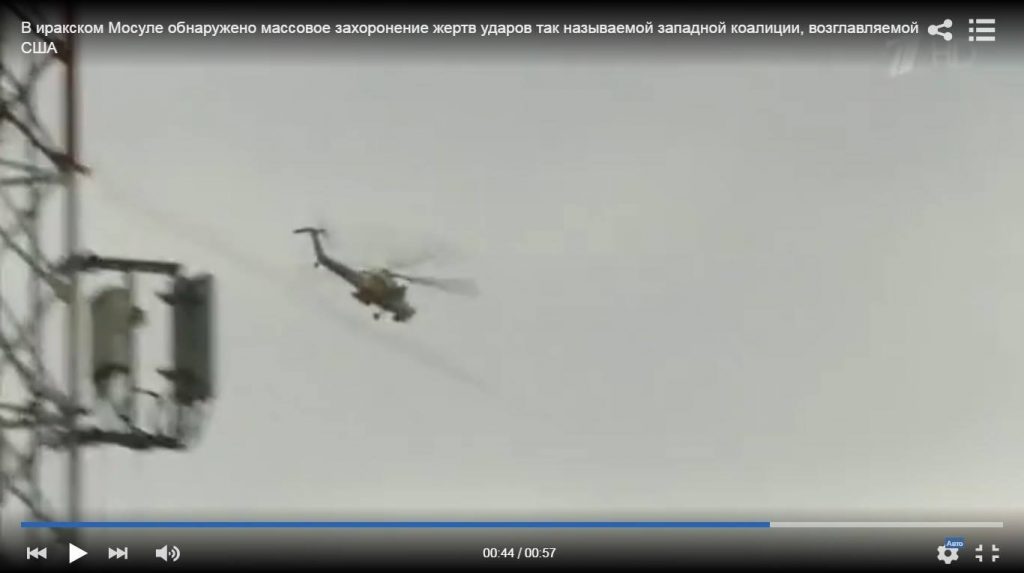 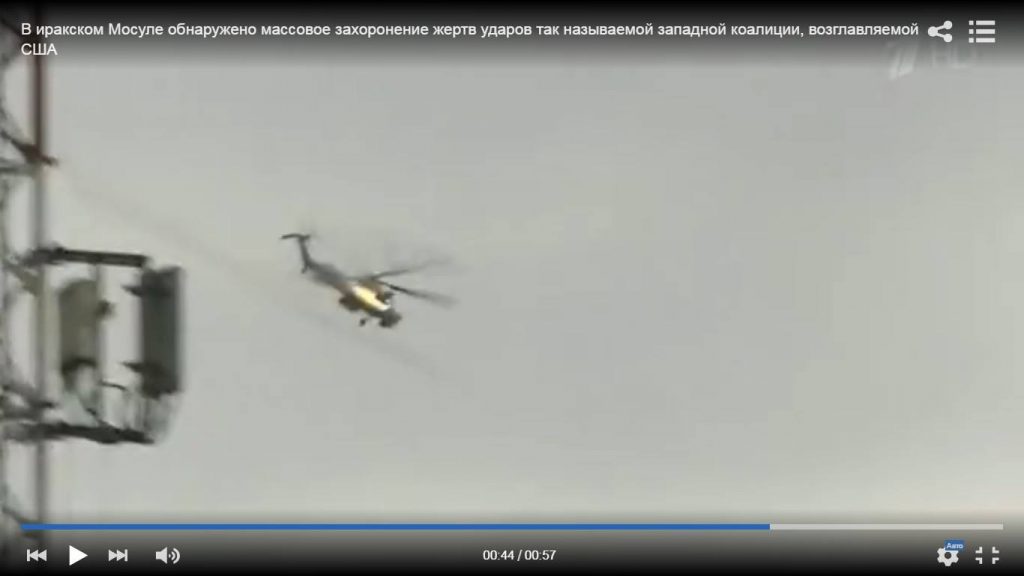 The Mi-35 helicopter strikes with unguided rockets at targets located presumably in the city’s buildings. Iraq and the US are named as culprits in the headline, but it is Russia that supplies this type of helicopter and weapons to Iraq, Syria, and other countries.

Further, the Russian heavy flamethrower system TOS-1A “Solntsepyok” is in the screenshot of the propaganda story. In 2016, Russia supplied more than 3 TOS-1A systems to Iraq. Of course, this is also the “fault of the coalition led by the United States.” 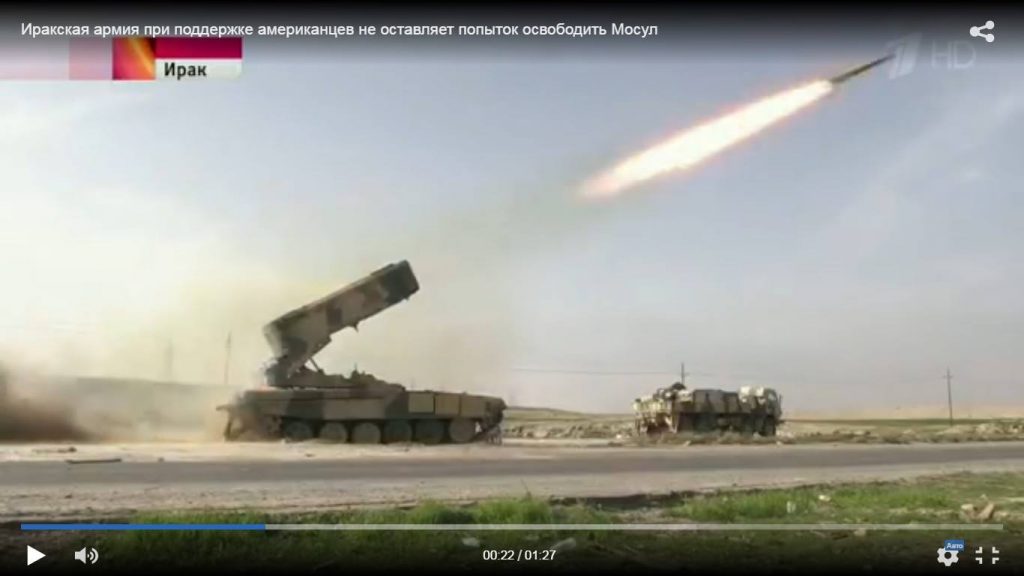 The next story by First Channel from March 25, 2017: “The air strikes of the Western coalition on residential areas in Mosul became the subject of closed consultations in the UN”: 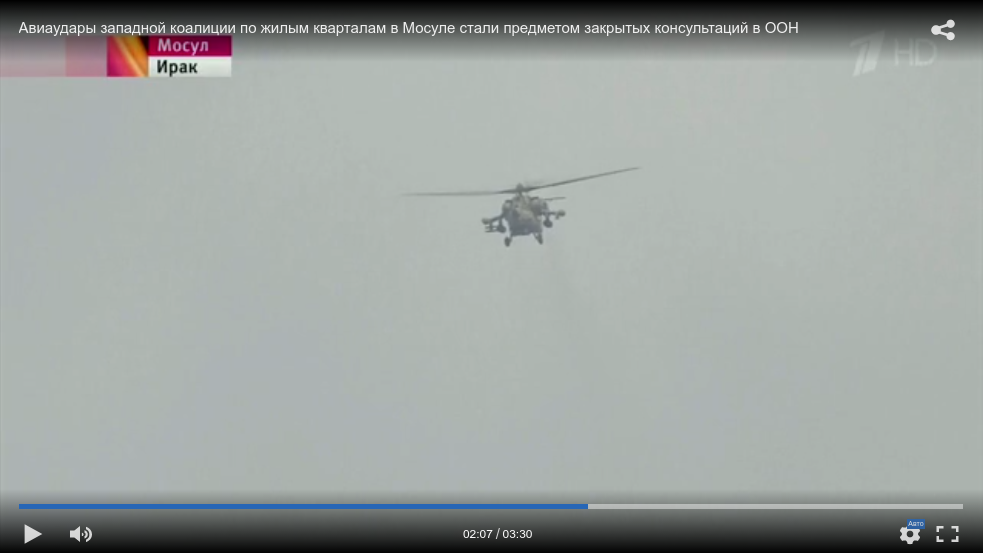 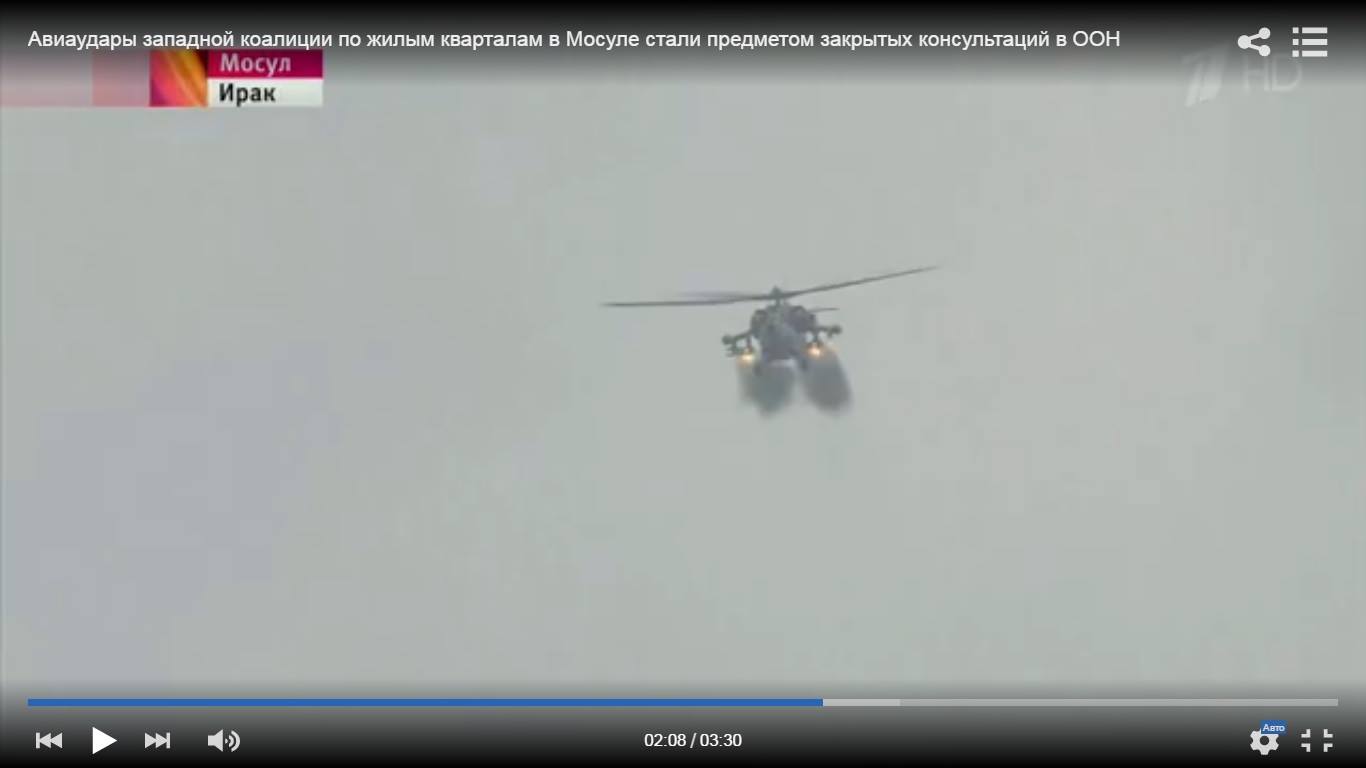 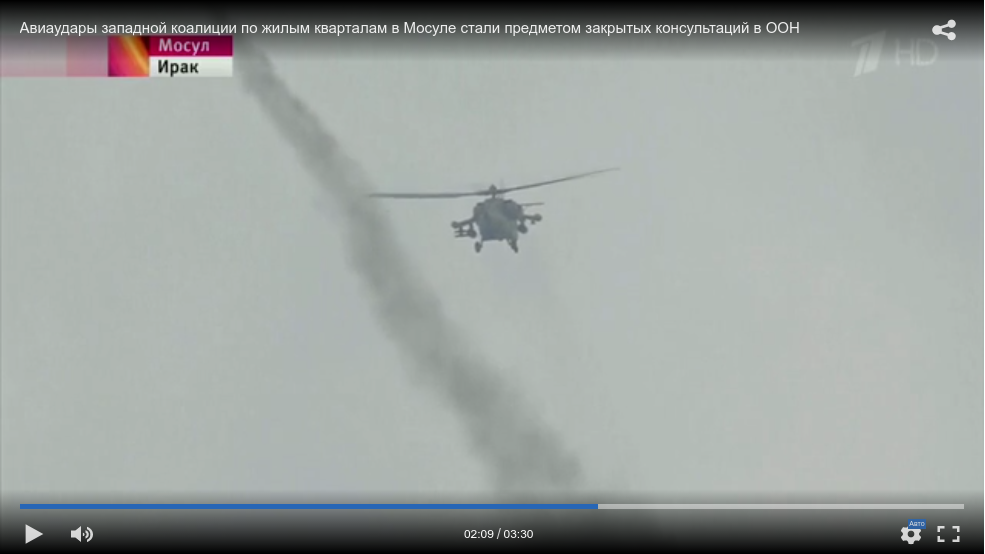 In the video, a manufactured for export Russian Mi-28L helicopter strikes with unguided rockets. Russian correspondents once again happened to be “in the right place at the right time” to have time to film the work of the Russian combat aircraft. Moreover, being in the strikes zone, they do not worry at all that they will get hit. It’s more like a coherent, well-planned operation between those who strike and those who record it. We have already seen similar stories about the shelling of civilian targets on orders of Russian correspondents in the Donbas, which in fact makes these representatives of Russian propaganda accomplices in war crimes.

Thus, the picture does not always correspond to the context and often contains a completely opposite meaning, through which you can read between the lines of the stories of Russian propaganda. Mindfulness is one of the qualities that helps to disarm Russian propaganda.

Recall that on October 10, 2016, the Committee on Foreign Affairs of the European Parliament adopted a draft resolution in which the work by Russian media was compared to the propaganda materials of the terrorist group ISIS.

( CC BY 4.0 ) The publication was prepared by InformNapalm based on the OSINT investigation conducted by Al Gri exclusively for InformNapalm international intelligence community. Translated by Svitlana Kemblowski

No Responses to “Mosul: Arms of Russian propaganda”