Medvedchuk’s TV channels closure in Ukraine is a counteraction to Russian hybrid aggression, not an attack on freedom of speech 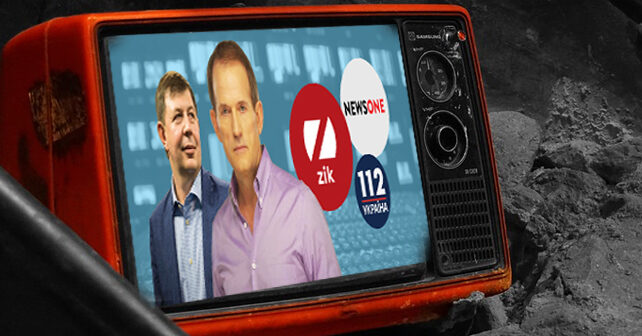 Ukraine has introduced sanctions against pro-Russian TV channels, the beneficiary of which is the godfather of Russian President Vladimir Putin’s daughter, the Ukrainian oligarch Viktor Medvedchuk. The formal owner of these TV channels – 112 Ukraine, NewsOne, ZIK – is Taras Kozak. The sanctions against these TV channels prohibit both financial transactions and broadcasting. More details about the profiles of sanctions and restrictions are introduced by the decision of National Security and Defense Council (NSDC) can be found on the Novinarnya website.

According to the decision of the NSDC, the Cabinet of Ministers of Ukraine, together with the Security Service of Ukraine and the National Bank, must ensure the enforcement of the imposed sanctions and monitor their effectiveness. The Ministry of Foreign Affairs of Ukraine must inform the competent authorities of the European Union, the United States and other states about the application of sanctions and raise before them the issue of introducing similar restrictive measures.

Detector Media NGO made a monitoring of pro-Russian disinformation narratives in Ukraine in the fall of 2020. The findings strongly suggest that the TV channels of Medvedchuk’s group were responsible for more than half of the recorded cases of pro-Russian propaganda. For this they were repeatedly reprimanded by the National Council on Television and Radio Broadcasting of Ukraine. Columnist for Detector Media Yaroslav Zubchenko published a review citing specific examples demonstrating why the closure of Medvedchuk’s channels group cannot be considered an attack on freedom of speech. We should like to publish this text for Ukrainian and foreign readers of InformNapalm. 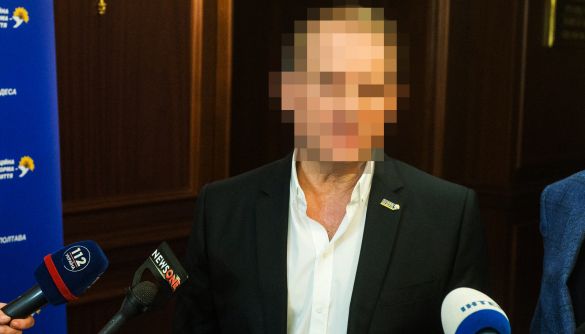 On the evening of February 2, the NSDC imposed sanctions against Taras Kozak and the TV channels officially owned by him. NewsOne, 112 and ZIK channels are prohibited from producing any TV content for the next five years. It is not yet known how this story will end: whether the government will back down, or the decision will be contested in courts, or new channels will be registered with new figureheads. One thing is certain: Medvedchuk’s employees will cry foul about an attack on the freedom of speech. And that will be a lie.

There was no freedom of speech on Medvedchuk’s channels

First, it should be clear that Medvedchuk’s TV channels never had any freedom of speech as such. The anchors worked in the interests of the openly pro-Russian political party called Opposition Platform – For Life (OPFL), and they admitted it on air. “I am working to maximize the electoral success for the “pposition Platform – For Life”, noted Vyacheslav Pikhovshek, a NewsOne anchor. This shows that the TV channels were never free.

OPFL Members of Parliament could shut up the “journalists” when they tried to interrupt them. However, most of the time the moderators were anyway silent, while the members of the OPFL were giving their monologues. During the “interview” of Vadim Rabinovich, for instance, the “journalists” kept silent for 15 minutes. And in conversations with Medvedchuk, the interviewers carefully avoided any uncomfortable questions.

In addition to the footage, the suppression of the freedom of speech extended to editorial policy. For example, ZIK was silent about the protests in Belarus for more than four days. Only Medvedchuk’s channels ignored the investigation of Alexei Navalny concerning Putin’s palace at the end of January.

Moreover, there was no free speech for the opponents of OPFL on NewsOne, 112 and ZIK channels. They were given the floor less often than affiliated politicians. And when opponents criticized the pro-Russian position, they were systematically interrupted. For criticizing Medvedchuk, the guests were kicked out of the studio and then relevant fragments of talk shows were cut out. When the guests pointed out the injustice in the studio, the hosts asked them “not to whine”. And only a week before the elections, the channels simultaneously removed from the air Andrei Palchevsky who had been one of the most popular guests of their programs before. Viktor Medvedchuk and his party came to the fore instead.

Compared to the other information media in Ukraine, Medvedchuk’s channels were the most dependent on their owner. And they should have defended their own “freedom of speech”, first of all, from him. On some local shows, there were more speakers affiliated to OPFL than all the other guests taken together. In a show hosted by Vadim Rabinovich, the choir sang the phrase “For Life”. Channel 112 produced a whole reality show to promote the party.

ZIK employees had valid reasons to quit en masse when the channel came under Medvedchuk’s control. After all, the media belonging to this person had never engaged in journalism.

NewsOne, 112 and ZIK channels provided media support to the Russian aggression against Ukraine. And this is not an exaggeration.

The channels of Putin’s godfather did their best to justify the annexation of Crimea in the eyes of the Ukrainian public. Yuri Dudkin, an openly por-Putin “military expert”, stated on ZIK that the Russian army defended the peninsula from the Ukrainian army and mass killings “like on the Maidan”. Oleh Voloshin, member of the editorial board of Channel 112, on ZIK said that by annexing Crimea, Russia prevented the “future big war”, which could have begun if NATO infrastructure appeared on the territory of Ukraine. In addition, Voloshin actually argued that the Russian vaccine “outweighs the grievance” of the annexation.

The pro-Russian channels also directly blamed Ukraine for the war in the Donbas. Renat Kuzmin, ex-Prosecutor General of Ukraine under Yanukovych regime, argued on ZIK that it was a “group of Ukrainian conspirators” who first seized power through the Maidan, and then “started the war in the Donbas to safeguard their power”. The NewsOne host Ruslan Kotsaba echoed the “Kyiv conspirators” spin and said that “they tried to conquer the rebellious Donbas with tanks […] It was the Kyiv conspirators and, shall we say, traitors who illegally proclaimed the so-called Anti-Terrorist Operation on April 14, 2014”.

At the same time, these channels tried to glorify Russian militants and portray them as independent actors. Olena Lukash, another vocal pro-Russian politician, on NewsOne called local terrorist formations “the unyielding Donbas”. She also argued that Russia was helping Donbas in the same way as the US or the EU was helping Ukraine. Renat Kuzmin claimed on 112 channel: “If the creation of the LDPR was a desperate attempt of the people of the Donbas to defend from state criminals who seized power in Kyiv […] then actions of these people were the necessary defense. They defended themselves.” Oleksandr Kachny, a Party of the Regions politician, on NewsOne praised the life in the occupied territories saying that they live “in that Ukraine which still had the [Russian] language, still had the same religion, where there still was peace, where no one enforced anything. They do not have their streets renamed, their monuments have not been knocked down, they have no de-communization .“

Accordingly, Medvedchuk’s channels attributed to Ukraine a unilateral continuation of the war. Irina Palamar on ZIK channel argued that Russia would have ended the war, but Ukraine was continuing it. Renat Kuzmin said on ZIK that “the Americans forbade to end the war”. Viktor Medvedchuk on 112 channel argued that it was Ukraine that disrupted the Minsk talks, because it did not agree to Russia’s demands regarding the separate elections in the occupied Donbas. ZIK anchors were outraged by the fact that the Ukrainian government was “demonizing Russia”.

On the whole, Medvedchuk’s TV channels tried to convince Ukrainians that they needed to abandon their own Ukrainian values and return to the fold of Russia. Unchallenged by the host, guests in NewsOne studio claimed that “Ukraine being built only for the Ukrainian nation, would have to be reduced to five regions”. Guests of 112 said they were proud to be part of the “Russian world”. Alexander Semchenko on 112 channel, also said: “Ukrainians are, in fact, Russians. I do not understand how a Russian differs from a Ukrainian […] We are told that we are some kind of separate nations.“

The channels discredited everything pertaining to Ukraine. Diana Panchenko, a ZIK host, speculated on air that some of the clients of the restaurants and her mother in particular were “annoyed” when spoken to in Ukrainian. Medvedchuk’s media equated the Ukrainian view on history with Nazism. The Ukrainian church was labeled the “Berlin Wall” for the Ukrainians, and its independence was also called “an element of Nazi ideology”. The Revolution of Dignity, according to ZIK, was carried out by “internal terrorists”.

At times, it was unclear which country these channels were broadcasting for. Concerning the flight of American bombers over the territory of Ukraine, NewsOne only quoted the opinion of OPFL politicians and Russia. As for the “Medvedchuk’s POW exchanges”, sometimes only militants were quoted. Also, these channels began to reintroduce Mykola Azarov, the runaway ex-Prime Minister of Ukraine under Yanukovych regime into the media space of Ukraine – at times he was interviewed almost weekly. New Year’s Eve on 112 channel was hosted by a Russian comic duo who openly mocked Ukrainians. The one that previously performed on the channel the song: “They divided the island backwards and forwards. Apparently, the Revolution did not work for them.“ This is not to mention that only the Russian coronavirus vaccine existed on Medvedchuk’s channels.

Although Medvedchuk’s channels are trying to hide behind the line “This is the opinion of the guests, not the position of the channel,” it is clear that the guest policy is the position of the channel. Nothing prevents NewsOne, 112 and ZIK channels from not inviting people who lie on air about the “civil war in Ukraine”. However, it is those people who are invited by these media most often.

Over the past five years, Detector Media has published hundreds of materials featuring Medvedchuk’s media: talk show monitoring, monitoring of information channels, propaganda reviews, quote selections. You can open any text at random and get another solid proof that all this is not about journalism and not about freedom of speech. We are dealing here with three media outlets, which accounted for half of all Russian disinformation in Ukraine.

No Responses to “Medvedchuk’s TV channels closure in Ukraine is a counteraction to Russian hybrid aggression, not an attack on freedom of speech”