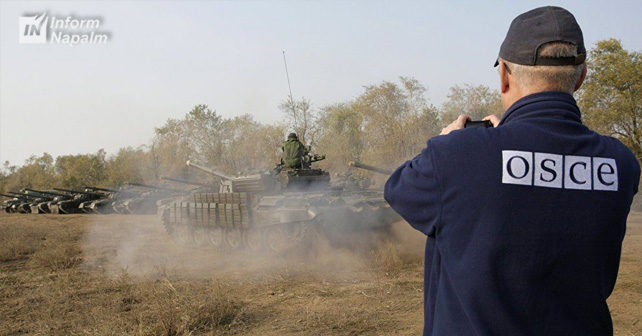 InformNapalm volunteer intelligence community prepared an analysis of the instances of obstruction of the activities of the OSCE Special Monitoring Mission (SMM) in the Donbas and aggressive behavior towards international observers in the first quarter of 2020. This material contains statistics, charts and maps that may come useful to diplomats, politicians, military, journalists, experts and any party that could use them to apply diplomatic, economic and media pressure on the Russian aggressor state.

On March 19, Ukrainian Foreign Ministry reported on its official Facebook page that the mandate of the OSCE SMM had been extended for another 12 months until 31 March 2021. The OSCE participating states also agreed to significantly increase the Mission’s budget to strengthen its monitoring capabilities.

“Because of this decision, the SMM will be able to continue to inform the international community of the facts confirming the military presence of the Russian Federation in the temporarily occupied territories of Donetsk and Luhansk Oblasts of Ukraine,” the report says. 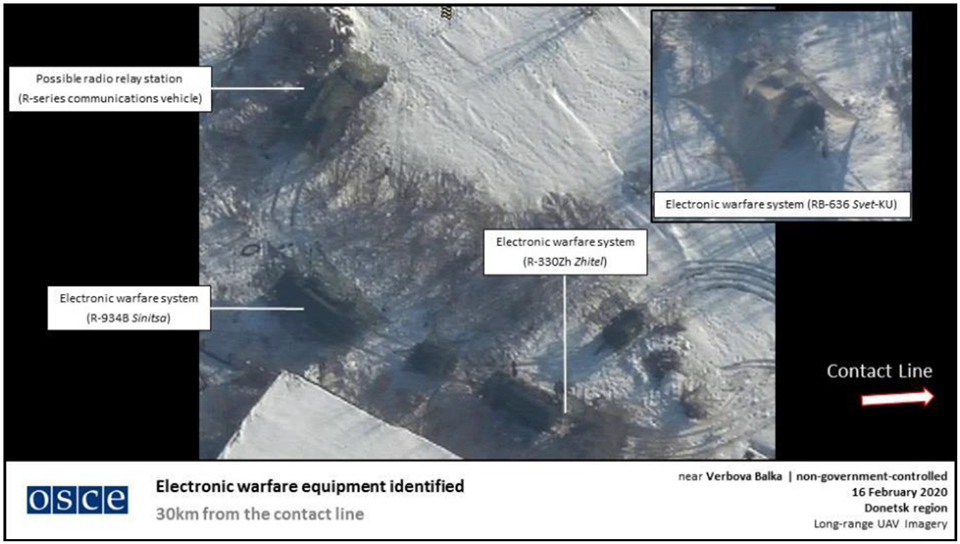 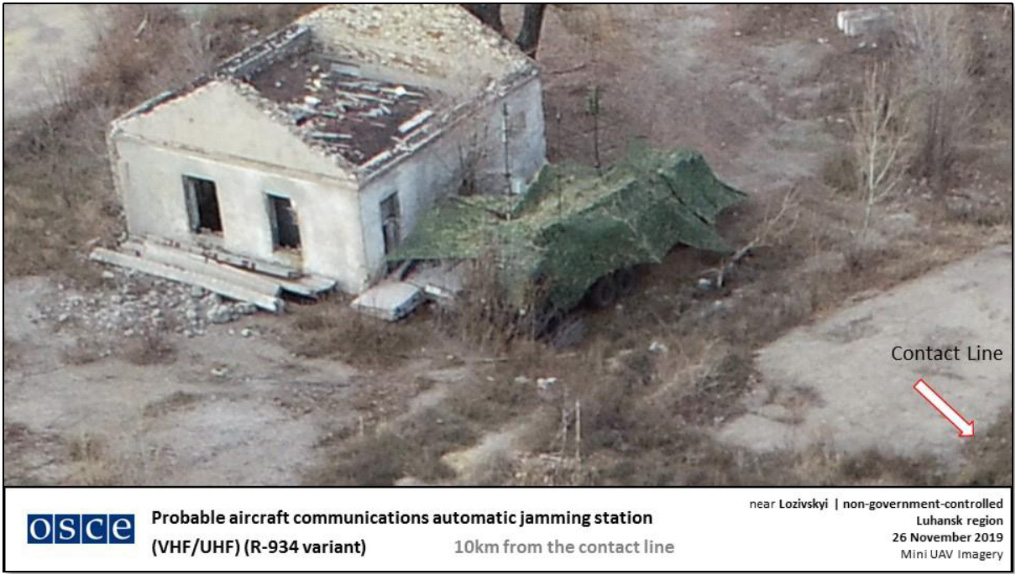 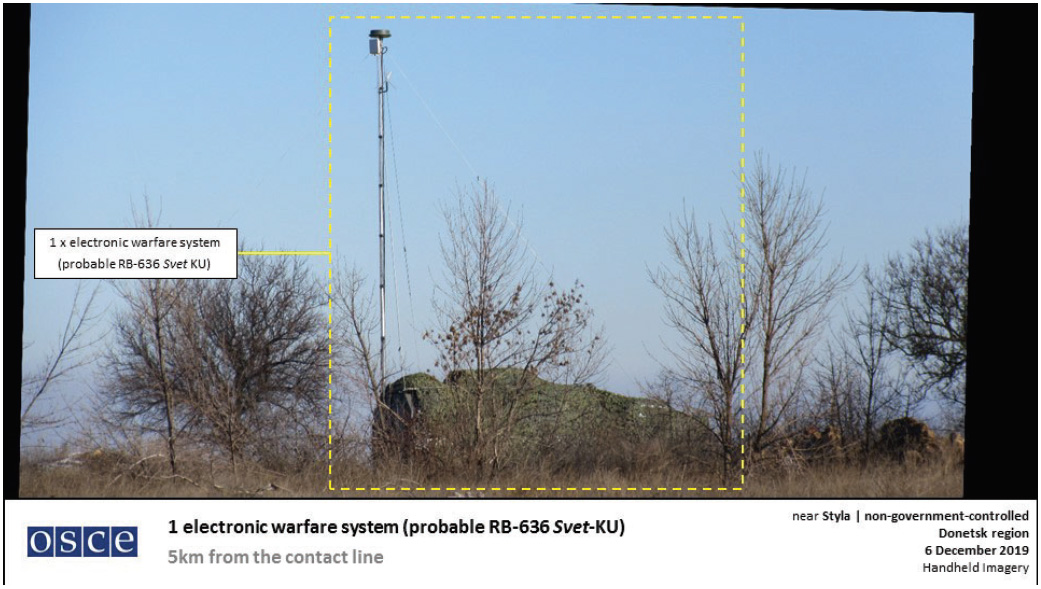 Indeed, from time to time the OSCE SMM daily reports contain unique data indicating the types of modern Russian military hardware that could have come to Donbas only from the Russian Federation and that can be operated only by qualified Russian military personnel. InformNapalm volunteer intelligence community regularly cites and supplements this data with its own open-source intelligence (OSINT). According to our observations, the aerial operations of the SMM are the most effective source of data on Russian military hardware in OSCE reports, while any sensitive facilities and areas in the occupied territory are kept virtually inaccessible to patrols.

To illustrate this situation, InformNapalm volunteers tried to collect and structure all the data on the obstruction of the activities of the OSCE SMM in the Donbas for the period from January through March 2020.

Obstacles in the work of OSCE SMM and threats to observers 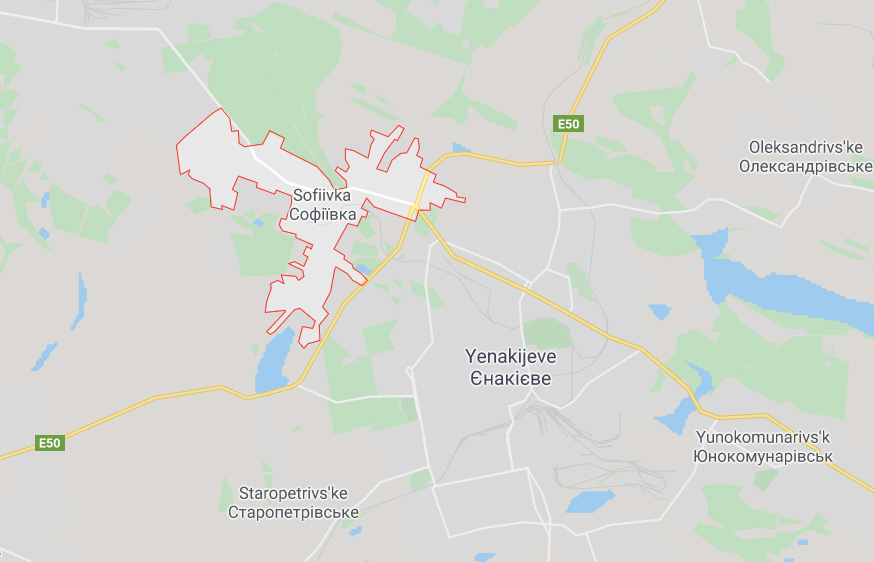 The daily report of the OSCE Special Monitoring Mission in Ukraine No. 65/2020 of March 18, 2020, contains a section about aggressive behavior displayed towards SMM personnel by armed militants controlled by the Russian Federation.

“In Sofiivka (formerly Karlo-Marksove, non-government-controlled, 40km north-east of Donetsk), two armed members of the armed formations stopped an SMM patrol consisting of two vehicles and five patrol members. One of the members of the armed formations, who was visibly intoxicated, aggressively told the SMM to open the driver’s door of the first vehicle, which the SMM did. He then pointed his rifle through the open door at the patrol
members, and subsequently opened the rear left door while demanding that the patrol members disembark the vehicle and open the trunk. After he moved away from the SMM vehicle to use a handheld radio, the SMM members closed all car doors and immediately locked them. The same member of the armed formations then tried to open the car doors while shouting aggressively. After eight minutes, they allowed the SMM to proceed further.”

The second incident occurred near the disengagement area No. 3 on the way of the Mission patrol to the temporarily occupied village of Petrivske

Russian propaganda in the occupied areas spreads disinformation about COVID-19

The increase in the frequency of aggressive behavior against OSCE SMM observers may well be not only the result of instructions from the Russian command to prevent access to certain facilities, but also the result of militants’ fears of the coronavirus infection. These fears are deliberately fueled by channels of the Russian propaganda in the occupied areas of Donetsk and Luhansk Oblasts that promote the alleged threat of the spread of COVID-19 in the territory of the so-called Donetsk People’s Republic (DPR) by the representatives of the OSCE SMM. The main objective of these actions is to further impede the movement of the observers who monitor the security situation.

The tendency towards increased obstruction of the Mission’s activities in the south by the Russian occupation forces has been observed for a long period. Since the beginning of 2020, the Mission has not been able to regularly and fully monitor the security situation in the areas between Donetsk and the coast of the Sea of Azov, including the border areas with the Russian Federation. OSCE patrols have been blocked by representatives of the armed formations controlled by the Russian Federation; aerial surveillance has also been restricted by the Russian electronic warfare assets in Donbas. 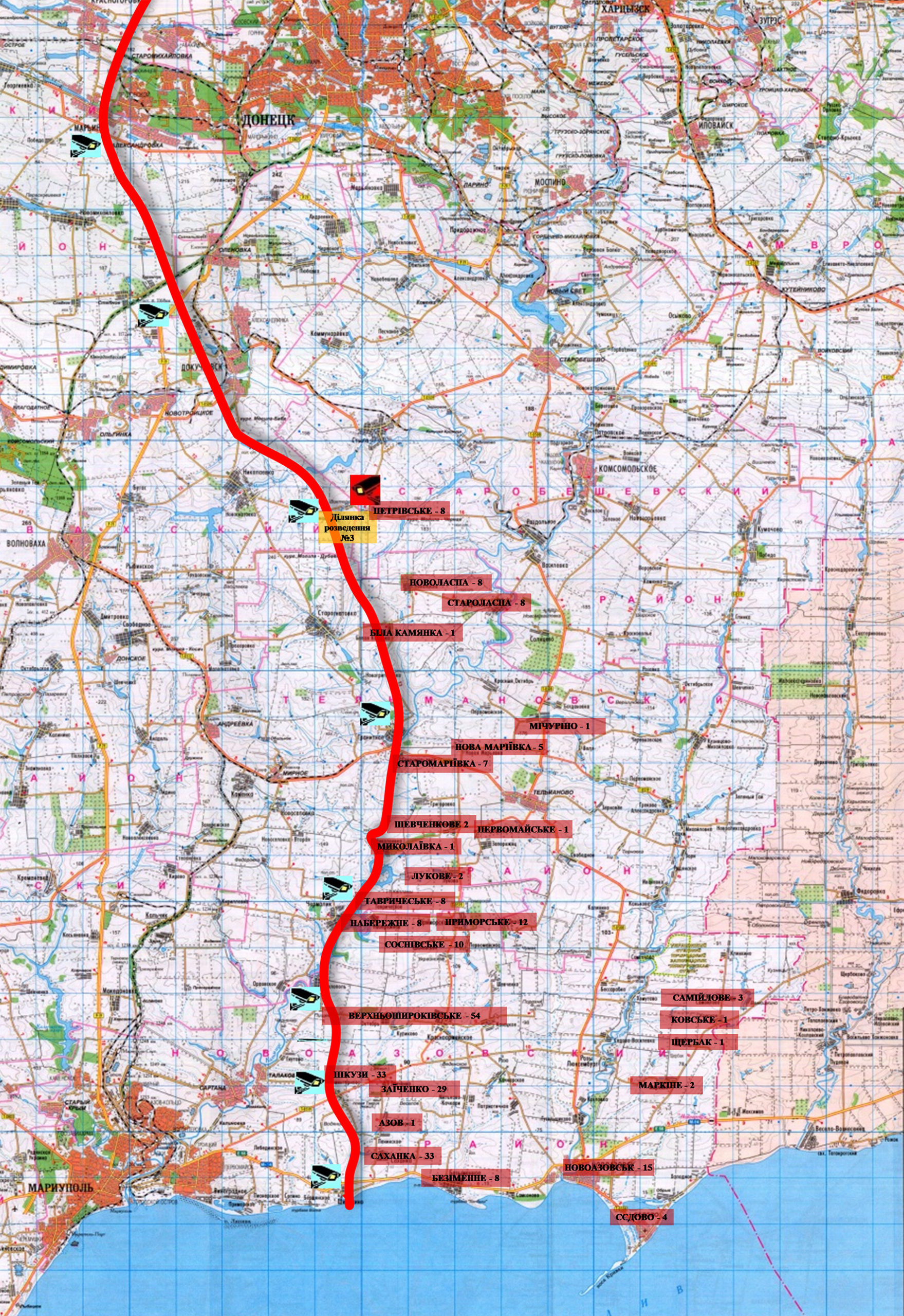 The OSCE SMM does not have access to the area of Hnutove, which is considered a new potential site for the disengagement of forces and assets in the Donbas.

For instance, almost every day the Russian occupation forces prevent the Mission’s passage towards the local checkpoint used by local residents on their way to the Hnutove EECP. In January 2020, at a checkpoint west of Verkhnioshyrokivske (formerly Oktyabr, non-government-controlled, 85km south of Donetsk) the OSCE SMM patrol was delayed 11 times for 20 minutes to 2 hours. 13 times, Russian militants did not let the patrol pass at all under the pretext of “special measures continuing in the area”, “carrying out an operation”, “demining activities” etc. At the same time, civilian vehicles were passing this checkpoint unhindered in both directions. In February, at the same checkpoint, militants denied passage to the OSCE patrol 21 times, and blocked them for long periods 3 times. In March, the same checkpoint denied passage to the SMM 6 times, however the number of occasions of obstruction to the Mission’s UAVs increased. Apparently, the balance change is due to the SMM shifting the balance in the observation in this area to aerial operations. In March, OSCE’s short- and medium-range UAVs experienced GPS signal interference on 16 occasions as a result of jamming by electronic warfare systems, and on four occasions Russian mercenaries opened fire on the OSCE UAVs with their small arms. 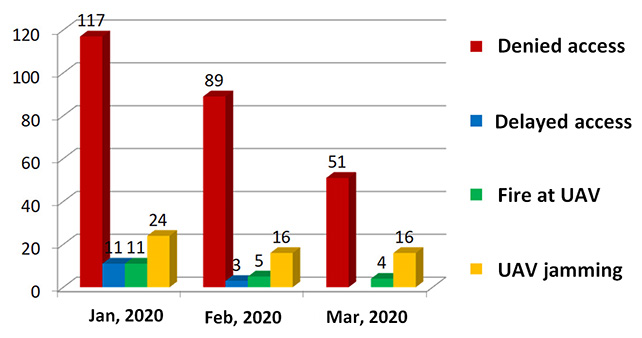 We would like to point out that at the meeting of the Trilateral Contact Group in Minsk on February 12, 2020, the parties were very close to reaching an agreement on a new section for disengagement of forces and assets near Hnutove. Darka Olifer, the press secretary of the head of the Ukrainian delegation, said after the meeting, “The Ukrainian side insists on ensuring the complete security of the Mission observers, whereas the OSCE SMM should enjoy unhindered access to the entire territory of Ukraine, as provided for by its mandate.” However, the reports of the OSCE SMM make it perfectly clear that the Hnutove EECP and its vicinity, controlled by the Russian occupation administration, are exactly the areas that remain inaccessible to the Mission, and it cannot effectively monitor the security situation and the military presence of armed formations.

Situation in the disengagement area No. 3

It should be noted that the access of the OSCE Mission patrols to the village of Petrivske controlled by the Russian occupation forces and to the SMM camera positioned on the edge of the disengagement area, opposite the camera in the government-controlled Bohdanivka, was limited for 8 consecutive days in January 2020. During the same period in January, the operations of the Mission’s short- and medium-range UAVs in this area were hindered by jamming at least 16 times.

It should be noted that Petrivske is the location of the only camera of the OSCE SMM in the south of the non-governement-controlled territory, while there are nine of them (in Maryinka, Berezove, Bohdanivka, Hranitne, Chermalyk, Pyschevyk, Shyrokyne, Hnutove and Hnutove checkpoint) in the adjacent areas controlled by Ukrainian troops.

In March 2020, OSCE SMM patrol was regularly denied access to the SMM permanent observation post at the central railway station of the temporarily occupied Donetsk. Armed militants have denied access to the patrol at least 8 times since early March. Observers reported the reasons for restrictions cited by the militants, which included “orders of the superiors” and the refusal of the observers to delete photographs taken by them on their previous visit.

“A member of the armed formations denied the SMM access to its regular observation post at the central railway station in non-government-controlled Donetsk city (6km north-west of Donetsk city centre), citing the SMM’s recent refusal to delete photographs that it had taken on a previous visit.” – OSCE SMM Report No. 56/2020 of March 7, 2020.