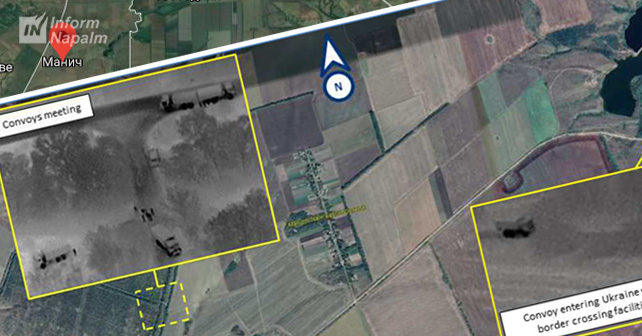 Volunteers of the InformNapalm international intelligence community received unique photographic evidence to support the OSCE report about another invasion of military convoys from the territory of the Russian Federation and covert cargo trafficking through uncontrolled border sections outside the checkpoints.

The textual part of the OSCE SMM report No. 249/2020 dated October 19, 2020 reports hidden movement of two convoys at night on an unpaved road and then through the village of Manych (Donetsk Oblast), their further movement, unloading of the cargo of one of the convoys in the occupied Donetsk and return by unpaved roads in the opposite direction.

In this feature, we are providing InformNapalm readers a photo from the UAV with a descriptive scheme of the convoy movement. The photo confirms the textual part of the report and demonstrates concrete evidence. 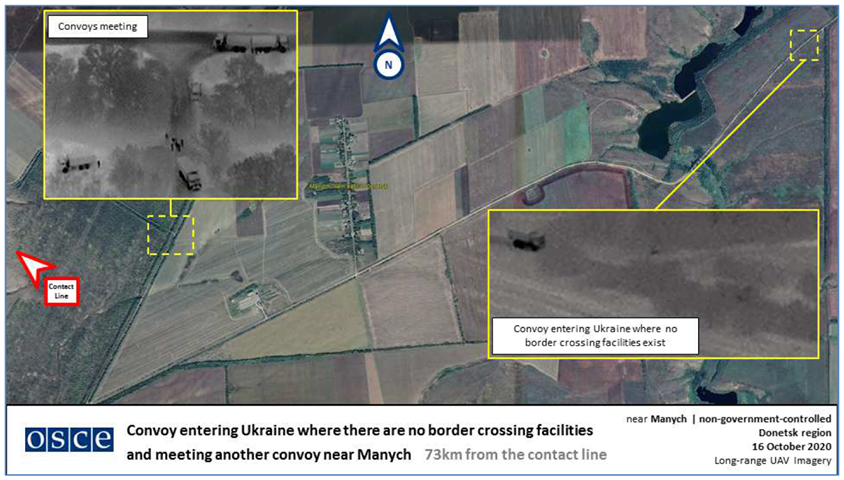 The OSCE SMM also previously recorded night-time convoys of trucks in this area in June and July 2020.

Also in June 2020, a covert movement of Russian equipment was recorded across uncontrolled sections of the Ukrainian border in the Luhansk Oblast. Then the convoys delivered a cargo to the base of the Logistics Battalion of the 2nd Army Corps of the Russian occupation forces in Luhansk.

Numerous violations of the weapons withdrawal

On October 20, the OSCE also published an analytical report on the trends observed in the war zone in the period from July to September 2020. According to these data, the OSCE recorded 421 pieces of weaponry deployed in violation of the withdrawal lines, whereas 91% of all violations of the withdrawal of heavy weapons were recorded on the side of the Russian occupation forces in the Donbas. 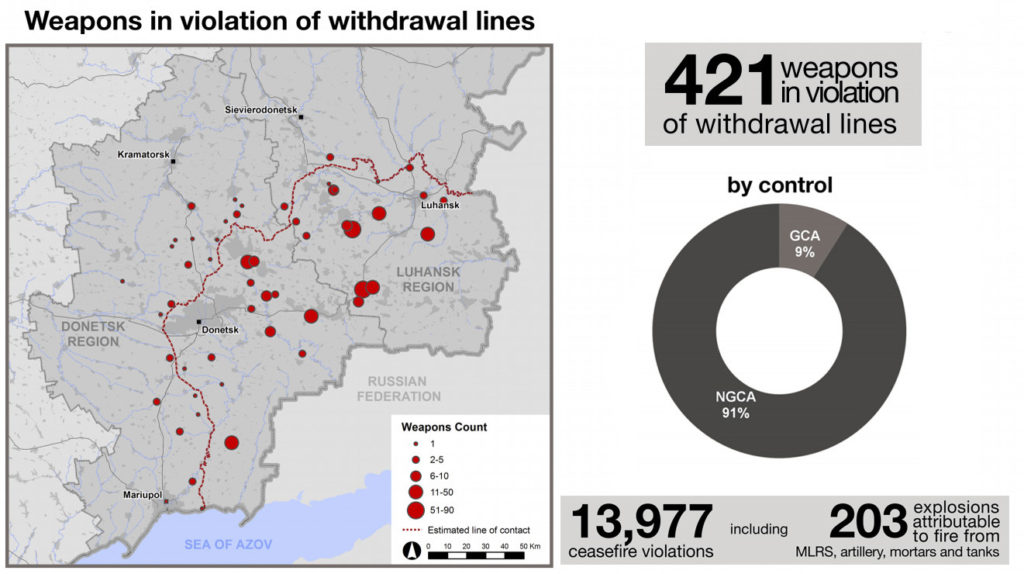 Russia continues to wage a hybrid war against Ukraine and violate the conditions for the withdrawal of weapons and military equipment. The current lull in hostilities in the Donbas is temporary, and is probably a sign of Moscow is pursuing other hybrid political strategies on the eve of the elections in Ukraine. At the same time, the Russian occupation forces use the ceasefire regime to actively reinforce their own positions, accumulate weapons and ammunition. They are also using arson as tactical tool in the JFO zone inflicting massive harm not only on the military, but also on civilians.

About 500 residential and more than 1,800 outbuildings were burned down by fires in the Luhansk Oblast in October. The situation was most critical along the contact line on the territory of Stanychno-Luhansk, Novoaydarsk, Siverodonetsk raions, where 32 settlements fell into the affected area.

We do not receive any financial support from any country’s government or large donors. InformNapalm.org website is kept alive only by the community volunteers and our readers. You can also volunteer or support the development of the unique volunteer intelligence resource with your donations through Patreon.