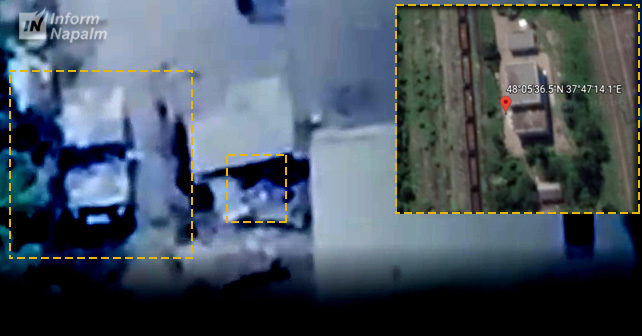 On July 8, 2020, one of the modifications of the Tigr Russian armored vehicle was spotted by a drone in the Donbas. InformNapalm volunteer intelligence community received photos and videos confirming the sighting, carried out geolocation and identified the vehicle modification. It was established with a high degree of certainty that the spotted armored vehicle is the chassis of the modern Russian mobile drone system MK-BLA-01. Read more below in this investigation.

Video recording of the Russian armored vehicle and geolocation

InformNapalm volunteers examined the video frames, geolocated and determined the exact position of this piece of equipment: 48.093482, 37.787252. 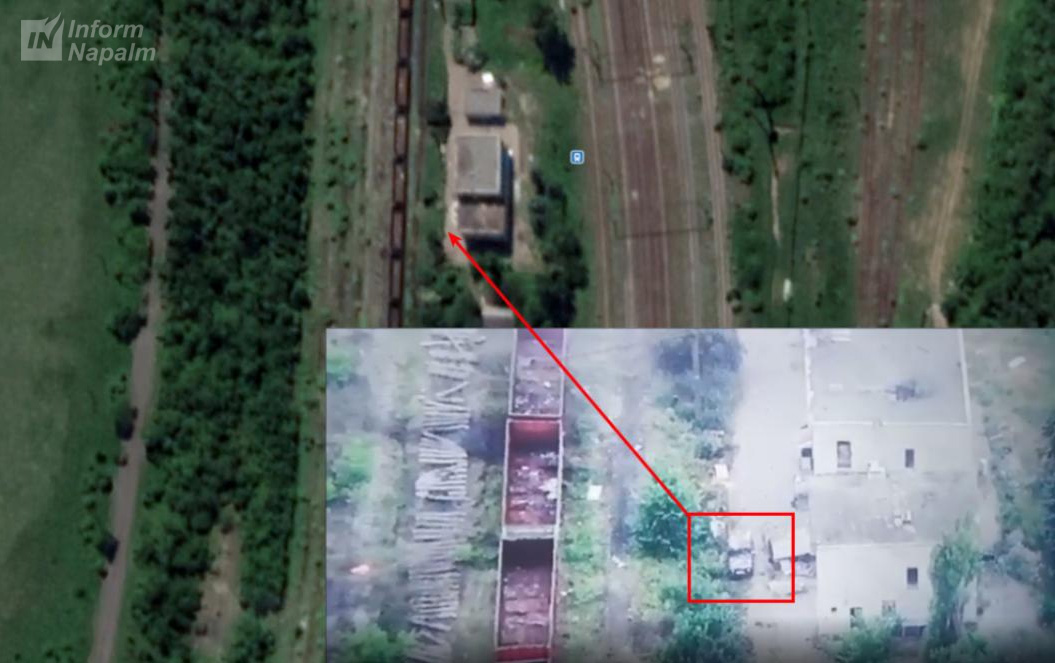 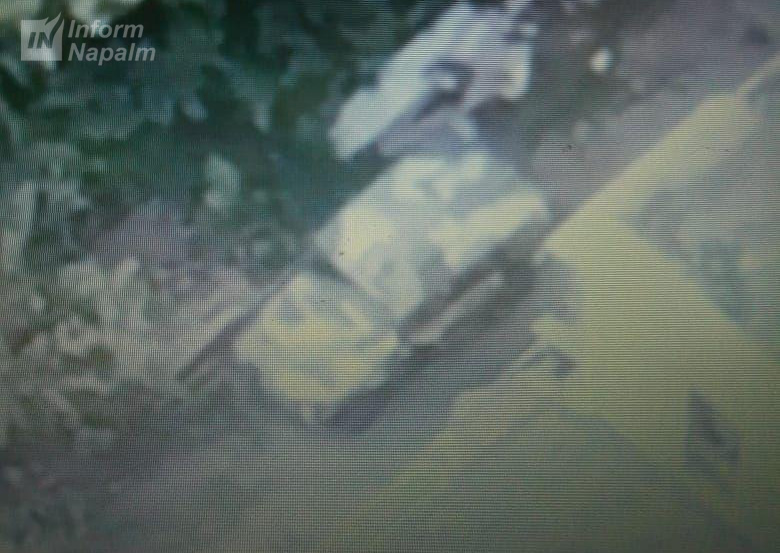 In this case, the absence of a roof hatch on this Tigr, the absence of armament and other combat elements, as well as the presence of elements similar to a satellite dish next to it, suggest that this vehicle is a chassis of the modern Russian MK-BLA-01 system. 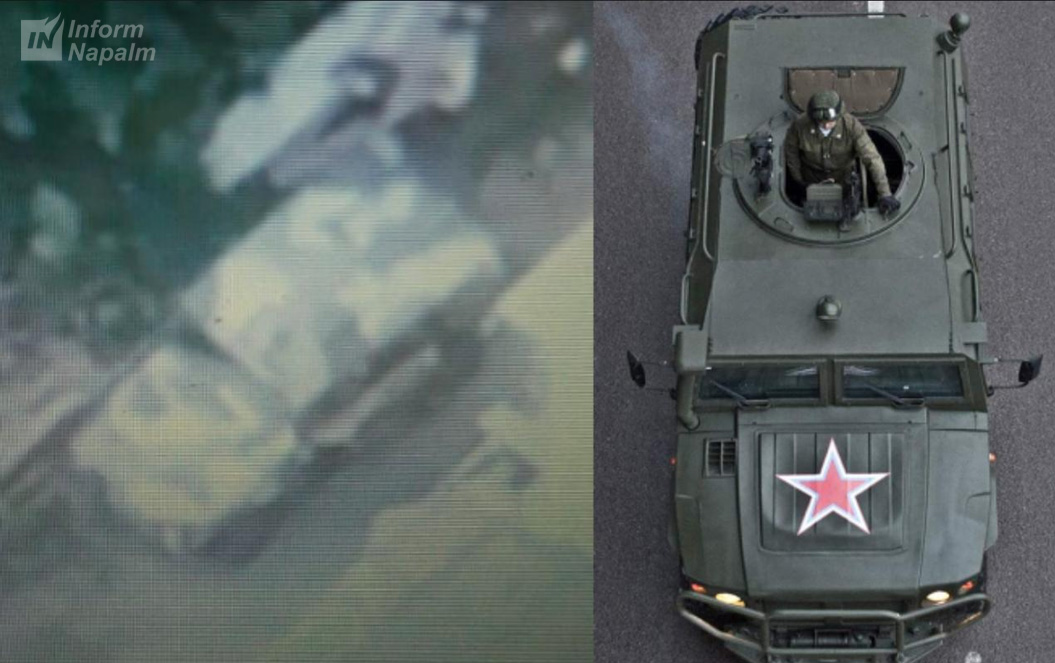 Left: photographs of armored vehicle Tigr in the Donbas on July 8, 2020. Right: comparison photo of the modification with a hatch.

Left: screenshot from video recording of the Tigr armored vehicle and a nearby element resembling a satellite dish. Right: comparison photo of the MK-BLA-01 system.

According to volunteer intelligence, units of the Russian occupation forces have been based at the premises of the depot of the Donetsk-Severny railway station since 2015, using it to assault the area of the ventilation shaft of the Butovka mine.

On July 9, 2020, the Joint Forces Operation headquarters reported that on July 8, the Ukrainian military had destroyed one Tigr-type vehicle in the Donbas.

MK-BLA-01 is designed to monitor the situation and conduct aerial reconnaissance over important strategic objects. It is used for radar surveillance and signals intelligence during special operations. The system has a capability for high-accuracy short range cartographic surveying. The system supports collection and verification of operational information. In the armored cabin of the car, there are special containers for transporting UAVs of two modifications: Strekoza (Dragonfly, type Zala 421-08) and Lastochka (Swallow, type Zala 421-04M). It also houses special equipment for their diagnostics and maintenance, in particular, two workstations for UAV operators with LCD displays and personal computers. One of the operators controls the UAV in semi-automatic and automatic modes. The other processes the data coming from the UAV. The drones of the system have different flight performance in terms of height and range, and are equipped with different payload equipment. Each of them is designed to solve its own set of tasks. The control equipment allows for simultaneous operation of two or more UAVs of a helicopter or aircraft type.

Other cases of Tigr vehicles spotted in the Donbas

In From 2014 to 2016, GAZ-233014 Tigr infantry mobility vehicle (IMV) modification was identified in the Luhansk Oblast in several investigations of InformNapalm. This IMV belongs to the 136th Motorized Rifle Brigade (MRB), military unit 63354, Buynaksk, Dagestan, of the 58th Army of the Southern Military District of the Russian Federation Professional servicemen and equipment of the 136th MRB have been repeatedly recorded in direct participation in the in hostilities in the Ukrainian Donbas. Read more in the materials of InformNapalm Russian Agression Database.

The photo with the Tigr armored vehicle in the background with the tactical signs of the 136th MRB in the Donbas was posted by Russian mercenary Oleg Rakhimov. 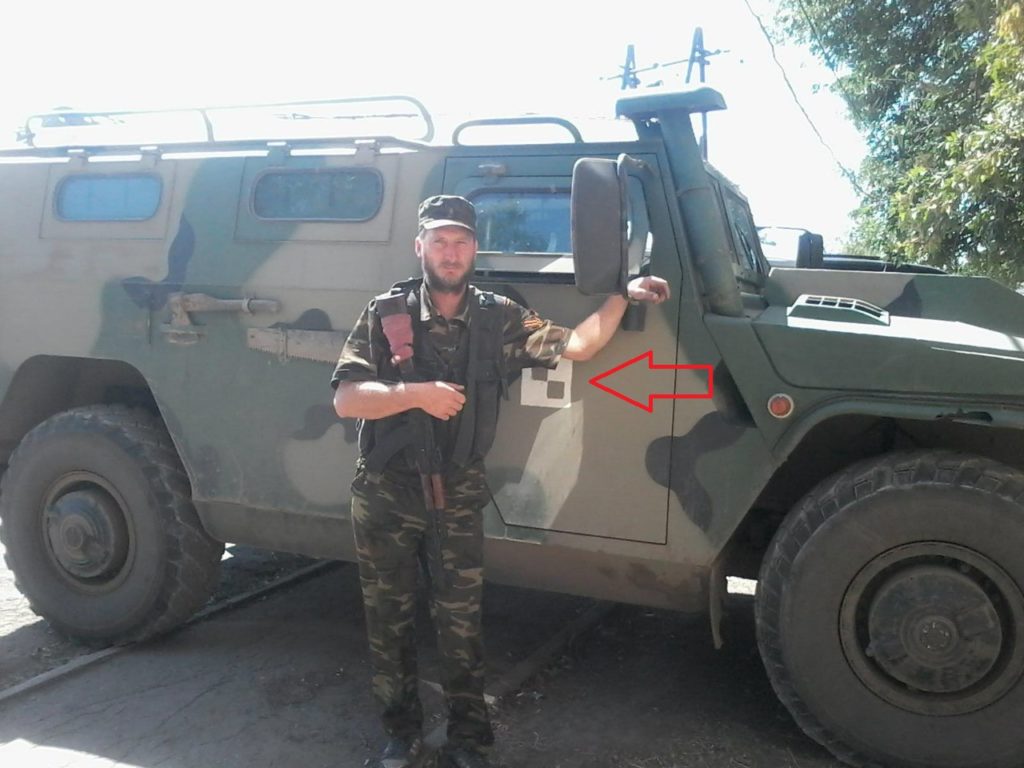 In 2016, OSINT investigator @ Askai707 posted and geolocated on Twitter the photos of militants of the Russian occupation forces who posed with Tigr armored vehicles in the Luhansk Oblast. Two Russian Tigr armored vehicles were seen in Luhansk near the Vostochny business center in autumn 2014. A militant of illegal armed groups Andrei Pen (listed in the Myrotvorets Center database) posted the photo in his social network account. 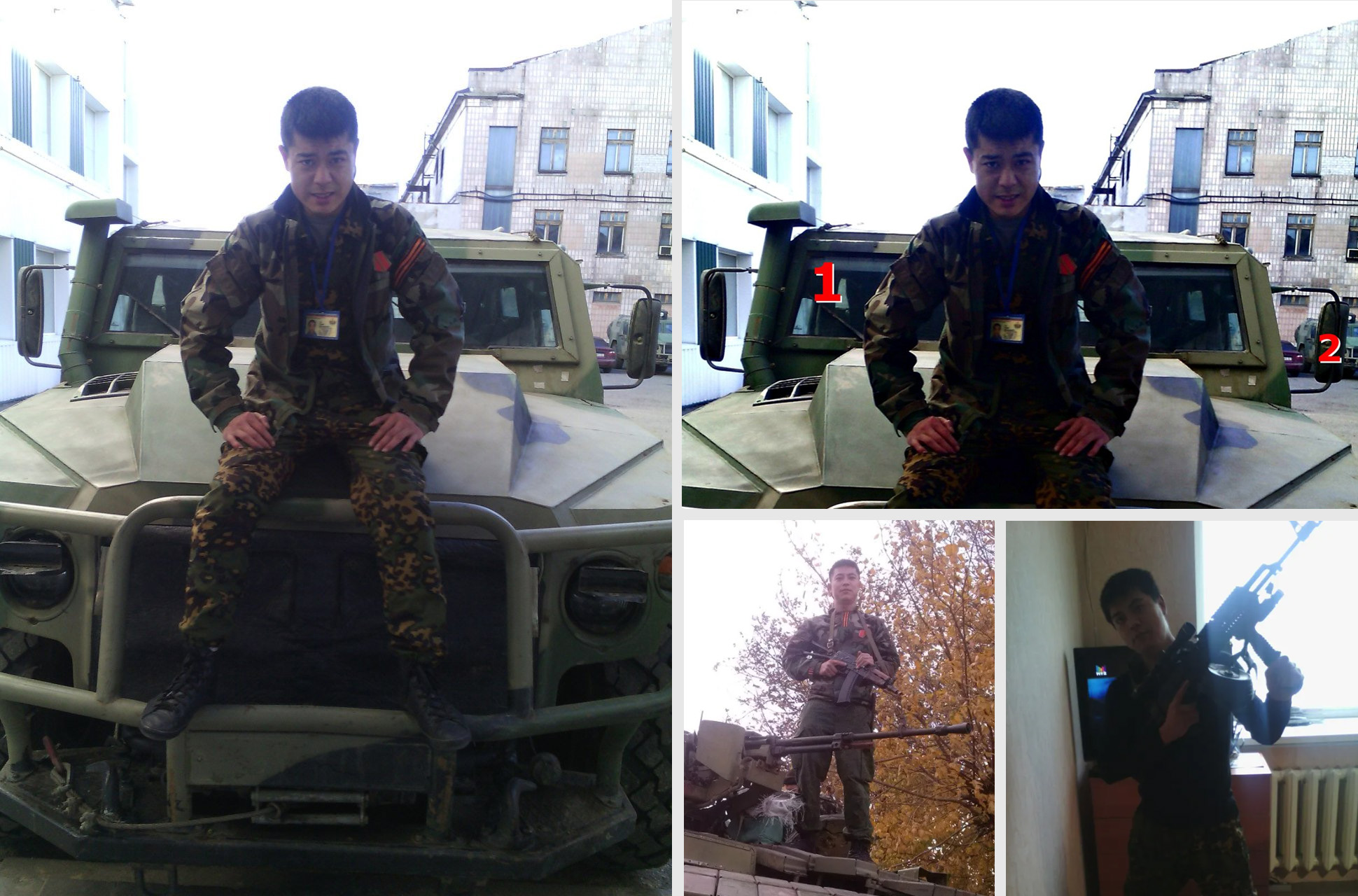 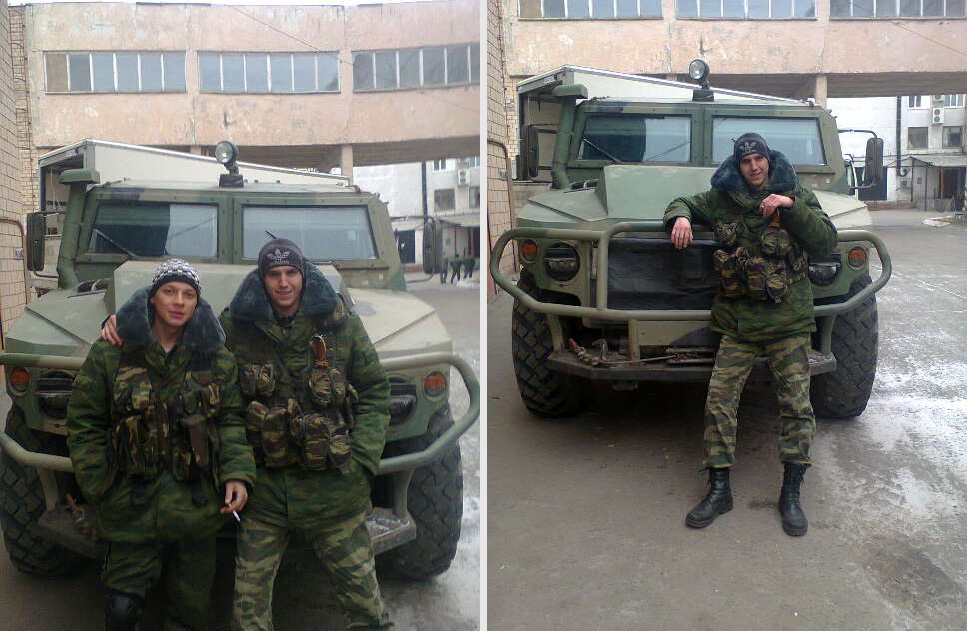 Another tigr armored vehicle and Russian military radio station R166-0,5 were photographed on the territory of the military enlistment office on the Krasnodonska Street in Luhansk in 2014. Let us compare the photo with a still frame from the news story of the Russian Channel One TV filmed in Luhansk.

It is worth reminding, that Russian invaders actively used Tigr IMVs for blocking and assaulting the Ukrainian military facilities during the occupation operation in the Crimea. The video shows a convoy of the Russian Tigr armored vehicles in Sevastopol in March 2014.

Besides old Soviet weapons and equipment, the Russian occupation forces in the Donbas continue to actively use newer hardware, adopted by the Russian Army at the beginning of the 21st century. Despite Russia’s false rhetoric, the escalation of the situation on the battle line and the active use of Russian weapons, intelligence and electronic warfare evidently shows the presence the Russian troops in the east of Ukraine with another type of sophisticated new military equipments, as Russian Federation continues active hybrid operations and does not plan to withdraw from the Ukrainian Donbas.

The InformNapalm international intelligence community appeals to Ukrainian and international diplomats, journalists and politicians to pay more attention to the facts confirming the Russian military activity in the Donbas. These materials must be used to increase international pressure on Russia, stepping up of economic sanctions in order to force the military and political leadership of Russia, and personally Vladimir Putin, to fulfill the commitmentsunder the Minsk Protocols to withdraw Russian troops from the territory of Ukraine.