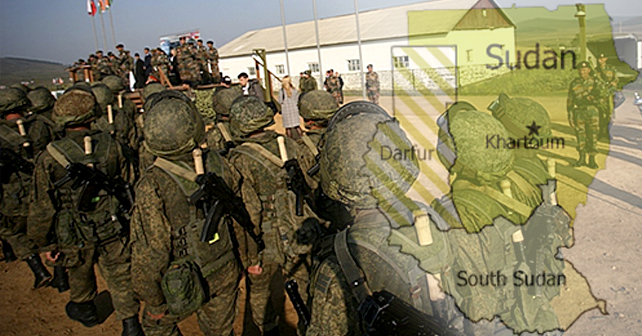 On December 12, 2017, a Russian correspondent of Komsomolskaya Pravda Alexander Kot published video footage that indicates increased activity of the Russian military in Sudan. According to the correspondent, the video shows how personnel of a Russian private military company (PMC) train Sudanese servicemen. In the video we can see Close Quarter Battle (CQB) drills. The nature of the exercise is similar to military exercises that units of the Russian Airborne Troops and Special Operations Forces conducted in Egypt in September 2016.

According to our estimates, there is a high probability that the training of Sudanese military personnel is carried out not by PMCs, but by regular units of the Russian Special Operations Forces. Among the Special Operations Forces tasks is providing military assistance to foreign countries. There are not many people in Russia who can speak the Arabic language even at a basic level. Most PMC staff who can speak Arabic are currently involved in operations in Syria. The voice of the person who gives commands in the background in Arabic clearly belongs to a native Russian speaker.

A long history of military cooperation can continue

In June 2008, the death of a Russian pilot in Sudan while flying a MIG-29 fighter was reported. At that time, it was stressed that Russian pilots, both active duty and retired, had been flying  Sudan’s 14 MIG-29s. The reason for this was the difficulties in training Sudanese pilots and them being “inadequate as pilots”.

This fact points us to the existence of many years of Russian military assistance to Omar Bashir’s regime which is under pressure by the International Criminal Court and is guided by the same motives as Bashar al-Assad in Syria. Sudan’s regular voting in the UN against Ukrainian resolutions on Crimea also indirectly points to the existence of military and political interaction at a high level between Moscow and Khartoum for at least the last three years.

It is likely that the Kremlin is seeking to expand and deepen such cooperation which could grow into a direct military presence in the country similar to the Syrian scheme: guarantees to the political regime in exchange for an unlimited military contingent and the deployment of military infrastructure.

Thus, there is a tendency to use foreign local conflicts to expand a military presence of the Russian Federation in these territories in exchange for military support and guarantees to the current authoritarian regimes. Similarly, Russia is supporting Libyan leader Khalifa Haftar, who controls the eastern part of the country, in order to deploy military bases near Benghazi.

Read also: Prospects of the Russian-Egyptian campaign in Libya

Despite a series of critical publications in the Russian media regarding the advisability of deploying military infrastructure in Sudan after Omar Bashir’s visit to Moscow in November 2017, the Kremlin is likely to make a positive decision in the first half of 2018. Doubts about the expediency of such a decision were related to the question of Western reaction to such a step, as well as the sufficiency of financial resources for such a project.

At the same time, the costly financial component of the project will obviously become the main factor determining the position of the Russian Ministry of Defense in the context of reducing the intensity of actions in Syria, and consequently reducing the financial expenditures of this agency.

From a political point of view, the Kremlin will embark on such an expensive adventure, as it will once again demonstrate the potential for confrontation with the US, which has a significant presence in the region, and gain the support of countries seeking to reduce the US influence or bargain with it. In addition, it will allow to establish control over oil supply routes in the Red Sea, and in coordination with Iran, if necessary, block the export of oil from the Arabian Peninsula, exerting a strong influence on the dynamics of world oil prices.

However, such a task requires the presence of a permanent Russian naval group, which will increase financial pressure on Russia’s budget. Therefore, according to our estimates, the Kremlin will choose the way of building a technical base similar to the one in Tartus (Syria) with the possibility of situational deployment of a temporary limited naval grouping. Such a scenario is likely, taking into account the level of the Kremlin’s relations with Egypt and Ethiopia, which will not impede passage of the Russian military ships.

In the event of the deployment of a naval base in Sudan, Russia may face increasing competition with China which has significant interest in this country, as well as a conflict of interest with Saudi Arabia, for which the Russian Navy in Port Sudan poses not only risk for the oil industry but also national security in the context of logistics for military supplies to the Houthi rebels in Yemen. The Russian Navy in Sudan will also significantly weaken the weight of Ethiopia as one of the regional centers of influence. This is likely to affect the overall political cost of Russia’s presence in the region.