We remind our readers that Putin’s arrival in Crimea took place right after the Russian Federation had, on July 17, suddenly announced a large-scale overhaul of its troops and military fleets positioned at its southwestern regions.

On July 20, the operational tactical missile systems of the missile unit of the 49th Army of the Southern Military District of the Russian Federation, which are located in the Kuban region, have electronically launched the Iskander-M rockets targeting on-shore objects of the conditional adversary, claiming it to be within the plan of an unannounced inspection of the combat readiness.

The REC units have gone through the routine of radio-electronic disabling of the radio communication at various wavelengths and hit a number of checkpoints and communication hubs of the conditional adversary, including the channels of control and transmission of data for small unmanned flying devices. The Russian specialists perfected the sabotage of the navigation field in the vicinity of the tactical groups involved in a sudden overhaul and constructed the devices for blinding the precision weapon guidance systems of the conditional adversary during the preparation for Russian air forces’ strikes.

To complete these tasks, the Russians used the Murmansk radio electronic combat complex, whose location had been revealed by the InformNapalm volunteers all the way back in 2015. Also, the Russian REC specialists of the Southwestern military district worked tactic problems using the Krasukha, Borisoglebsk, and Layer-3 complexes, as well as the Zhytel automated obstruction station. The use of all these REC devices was also uncovered by the volunteers of the InformNapalm international intelligence community in occupied Donbas in 2014-2020.

Russia continues to militarize the occupied Crimea. In 2018, the Ukrinform agency, based on the results of the investigation done by the InformNapalm, published iconographics illustrating how Russia turns the annexed peninsula into a large-scale military base. 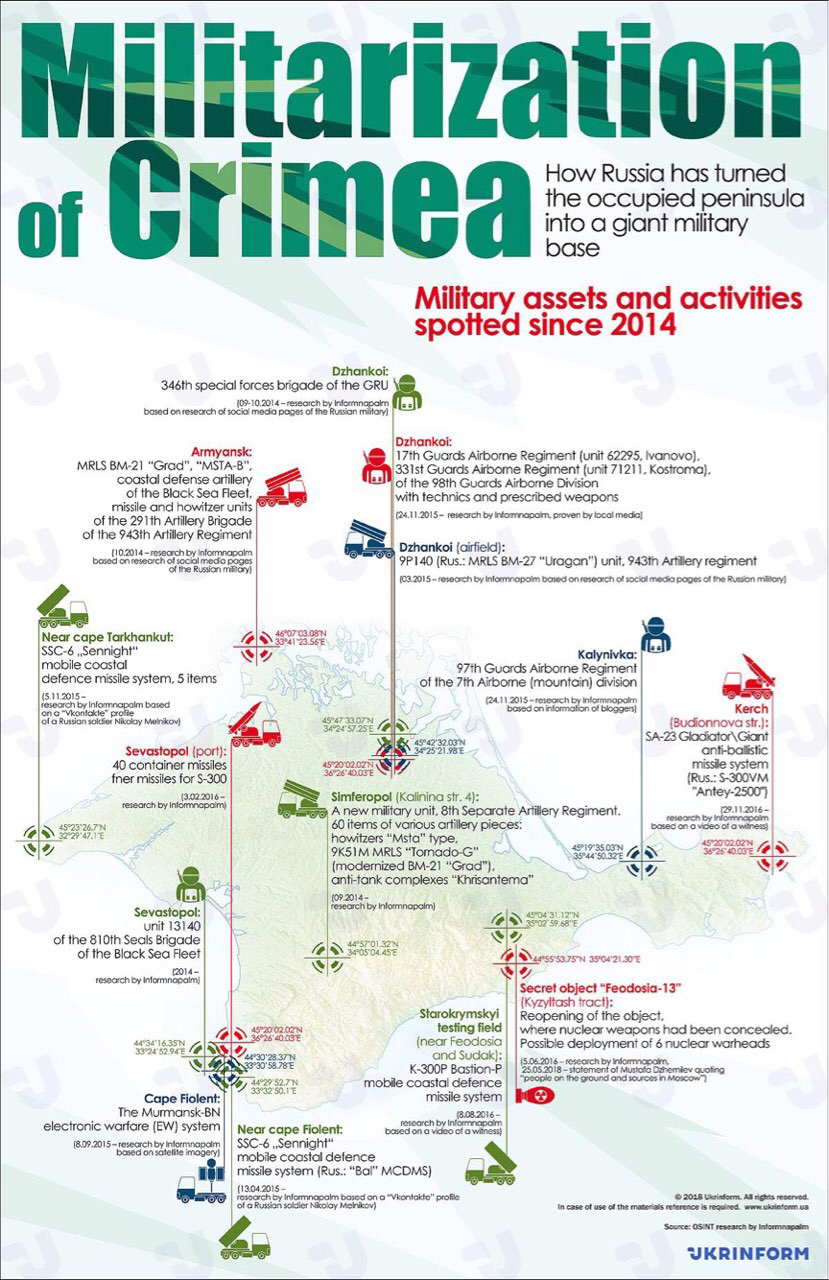 In 2019, the Prometheus Center of the Secure Environment Investigations published a unique research, titled, “Crimea Behind the Curtain. Guide to the Occupied Zone.”

The InformNapalm volunteers also have gathered evidence of 32 Russian military units taking part in the invasion of Crimea.

No Responses to “Putin has arrived in occupied Crimea. Timely data about Russian Army maneuvers near Ukrainian Border.”