‘Remnant of the Cold War’: Kremlin related media undermines the relevance of NATO 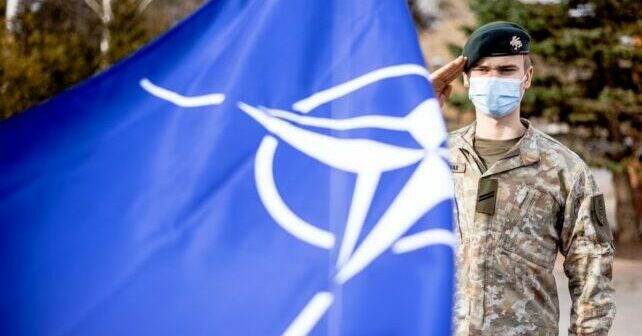 In addition to usual messages embedded in false and misleading content about the NATO, February sought a rise of claims questioning the relevance of the Alliance. Associations were made that NATO is an unnecessary Cold War relict since the Warsaw Pact was dismantled three decades ago. Attention of Kremlin related media also fell on statements made during the meeting of NATO Ministers of Defence and Munich Security Conference. Moreover, allegations that nation-wide protests in Russia were coordinated by NATO countries were further amplified by claims from top Kremlin officials.

In February 2021, Debunk EU detected 7027 articles related to NATO, which were posted by hostile media sources. Within the period, Debunk EU analysts reviewed 3045 articles with potentially harmful content, identifying 710 articles with false and misleading content from 84 media outlets in the Baltic countries in English, Estonian, Latvian, Lithuanian and Russian languages. The articles had a potential reach of 609 million contacts. On average, approx. 25.4 false and misleading content pieces were identified per day.

In February, disinformation targeting NATO maintained stable levels with minor fluctuations observed in the first week of the month. Starting from February 8th, the number of hostile articles increased dramatically and reached its peak on February 11th, following the statements of Russian officials on the alleged involvement of NATO countries in coordination of the nation-wide protests in Russia. Throughout this period, the number of NATO-related disinformation articles almost twice exceeded the average of hostile articles published within the month, thus indicating the scale and importance attached by Russian side to these events.

<…> At the site of Poland’s permanent mission to the EU, the EU countries plus the United States and Great Britain gathered. In general, this is called the NATO format <…> Volkov and Ashurkov were instructed to resume illegal actions, “since this entire information bubble” around Alexei Navalny will not survive until summer. (smotrim.ru 09/02/2021)

<…> The fact that Poland is the organiser of the meeting also says something -protests in Belarus were actively supported from the territory of this NATO country. With the same youth creativity that many saw on the Kiev Maidan, and at one time in Hong Kong, and now with us. (1tv.ru 14/02/2021)

Allegations of NATO countries supposedly instructing allies of Russian opposition leader Alexei Navalny to stir protests in Russia were amplified by testimony of the spokeswoman of Russian MFA Maria Zakharova, which was presented as an evidence. However, in her statement Ms. Zakharova does not provide any substantial evidence on Leonid Volkov and Vladimir Ashukov being ‘influence agents’ of NATO and speculates on Twitter post of Permanent Representation of Poland to the EU by guessing that persons were most probably instructed there.

This month, false and misleading information targeting NATO focused on three key areas that stood out in comparison with other topics:

<…> The transfer of ‘strategists’ is another demonstration of Washington’s readiness to confront Russia in the North. And in May 2020, three USS <…> destroyers <…> entered the Barents Sea for the first time since the mid-1980s. Formally – to ‘ensure safety in difficult natural conditions and maintain freedom of navigation.’ In fact, to check how Moscow will not react to the appearance in the home waters of the Northern Fleet of a naval group capable of firing a salvo of almost a hundred Tomahawks. Now it is the turn of the strategic bombers that will stay in Norway for a long time. (ria.ru, 11/02/2021)

Statements that NATO allegedly is turning partners as well as the member states into military bridgeheads fall under the rhetorical technique of hyperbolisation, where author tries to impose false dilemma on readers by presenting strengthening of military capabilities as either/or choice vice versus more state sovereignty. There is no incompatibility between the two, as increase in deterrence capacities, lowers risks of armed conflict and, therefore, results in the effective sovereignty. The purpose of false dilemma is to confuse readers to start treating manipulated situations as ‘real’.

Case #3 NATO is a vestige of Cold War

<…> Since 1949, when the NATO military-political bloc was created, so much water has flowed under the bridge -the ‘evil empire’ of the Soviet Union collapsed, Germany was united, Yugoslavia was dismembered, the Middle East ‘tyrants’ were exterminated -and the North Atlantic Alliance is right there, more alive than all the living! <…> As for NATO, the inconsistency of this vestige of the Cold War with the changed world is obvious to sober-minded people in the West itself. (pravda.ru 25/02/2021)

Associations of NATO being a ‘relict’, ‘vestige’ or ‘remnant’ of the Cold War fall under recurring narratives, usually voiced by Kremlin officials, who try to present the Alliance as incompatible with contemporary international system and obsolete. However, such statements are characterised by vague generalisations, which simplify and obscure the factual evidence as well as the changes that were made in NATO since the end of the Cold War. Therefore, claims of NATO’s Cold War mentality do not pass the factual threshold and are reflections of hyperbolisation technique.

Throughout February, narrative ‘NATO is a threat’ maintained the dominant role in distribution of false and misleading information with a total of 777 mentions which is eight times more compared to other narratives.

It is worth to mention that on February 26th application of narrative ‘NATO is obsolete’ rose sharply, following the reaction of Russian senator Aleksey Pushkov to statements of U.S. president Joe Biden and NATO Secretary General Jens Stoltenberg in Munich Security Conference. Throughout this day, the narrative acquired leading role and was identified in 70% of all problematic publications on NATO on February 26th.

This month, false and misleading narratives distributed evenly between NATO member states. Compared within country mentions, United States led in terms of mentions in false and misleading publications on NATO. Measured by proportion, the country also stood out in the application of narrative ‘NATO manipulates smaller states’, which in relation to other member countries was applied specifically to present the Alliance as a tool of U.S. hegemony.

In terms of differences in the ranking of the countries, The Netherlands and North Macedonia in February received considerably more negative coverage as compared to January 2021. Speaking of the former, distribution was significantly affected by the statements of the representatives of Russian MFA with references used to anti-lockdown protests, while the mentions of the latter occurred because of leaked documents from UK Foreign and Commonwealth Office.

In terms of distribution by media sources, ria.ru, rambler.ru and lenta.ru stood out in the audiences covered, amounting for slightly more than a half (51%) of all potential contacts reached in February.

Measured by traffic, false and misleading information on NATO, this month, was intended to reach and/or potentially focused more on domestic audiences of the Russian Federation, amounting for up to 85% of contacts reached.

This month, the main distributors of NATO-related disinformation in the Baltic countries were cont.ws, ria.ru, tsargrad.tv and rambler.ru, which made up to a fifth of the overall coverage. In terms of unique content published, state-funded outlets such as Sputnik media group and RT, along with Kremlin affiliated media groups, owned by private subjects (e.g., Internet Research Agency or TSARGRAD) tended to produce more hostile articles, as compared with, for example, cont.ws, rambler.ru and gazeta.ru which acted as amplifiers of content created by other media outlets.

As far as local language outlets are concerned, sputniknewslv.com stood out in terms of false and misleading content published in Latvian (95.8%), whilst sputniknews.lt (44.6%), Facebook page “Teisininkas Jonas Kovalskis” (12.5%) and ldiena.lt (8.9%) dominated the coverage in Lithuanian.

No Responses to “‘Remnant of the Cold War’: Kremlin related media undermines the relevance of NATO”