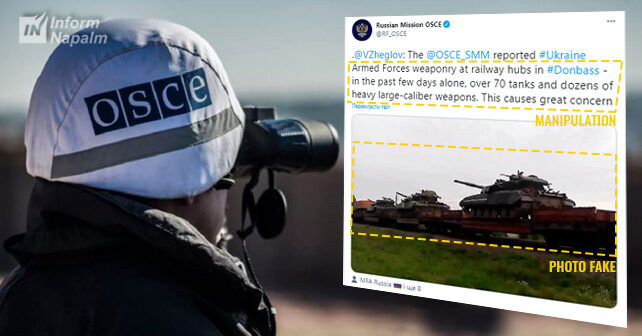 InformNapalm volunteers analyzed manipulative statements actively promoted on the official Tweeter page of the Russian Mission to the OSCE. In particular, we noted that the manipulations intensified immediately following the reports about the spotting of the latest Russian equipment in the Donbas. Notably, the Russian mission illustrated its official messages with modified photos taken in 2014. This combination of unconnected photos and manipulative information is aimed at distracting attention from the facts of constant arms withdrawal violations of the Russian occupation forces in the Donbas.

Thus, on November 22, 2020, messages in Russian and English on the official Twitter page of the Russian Mission to the OSCE informed that the OSCE SMM recorded a large build-up of Ukrainian Armed Forces weaponry at railway hubs in the Donbas. It was noted that “in the past few days alone, over 70 tanks and dozens of heavy large-caliber weapons” were heading to the Donbas.
(links to the tweets in Russian and English)

Volunteers of the InformNapalm international intelligence community have found this information too sensational. We decided to look for the original source of this image. Through regular Google search, we immediately got a matching photo with the only difference – it was slightly lighter. The photo led to the news story on the UApress website from July 10, 2014 headlined “A train with Ukrainian tanks is moving to the Donbas” (archive).

For the sake of objectivity, we will not rush to the conclusion that the tweet is a fake story. Perhaps it is illustrated by a modified old photo but based on real facts?

What the OSCE SMM reports about the tanks

We also went on to check the official reports of the OSCE Special Monitoring Mission to Ukraine (SMM) to find out recent records of any significant equipment redeployment. Considering that “more than 70 tanks” were mentioned in the tweets of the Russian Mission to the OSCE, we searched through 10 official OSCE SMM reports from 12 to 23 November with the key words tank / tanks.

A significant number of Ukrainian tanks were indeed seen at railway stations 55-60 km from the war zone (far beyond the withdrawal lines). However, this may indicate not only the arrival, but also the dispatch of the equipment for maintenance. Indeed, the equipment is periodically withdrawn from the Joint Forces Operation (JFO) zone and sent for repairs to other parts of Ukraine. For instance, in October 2020, Ukroboronprom reported that state enterprise Malyshev Plant in Kharkiv repaired and modernized a batch of T-64 tanks from the JFO zone in the Donbas.

Meanwhile, the OSCE SMM reports also periodically show that tanks and other heavy weapons of the Russian occupying forces in the Donbas are not only positioned in violation of the withdrawal lines but are also located near and within residential areas. In particular, these facts were recorded in one of the latest reports No. 278/2020. However this did not raise any concern of the Russian Mission to the OSCE. The rhetoric of the official page of the Russian Mission is nothing short of black propaganda and manipulation. For example, on November 19, they posted another propaganda tweet:

At the same time, Russia continues to deny the multitude of evidence-based facts proving that Kremlin is actually the main minder of the war in the Donbas. It controls hybrid armed formations and constantly deploys Russian military personnel and assets to certain areas of the Luhansk and Donetsk Oblasts.

For instance, InformNapalm with reference to OSCE SMM records and UAV photo evidence reported that advanced Russian electronic warfare system Navodchik-2 was reliably spotted for the first time in the occupied part of Luhansk Oblast, 12 km from the front line. The system includes seven UAV of the Granat family of various modifications with ranges of 10, 15, 25 and 100 km. The system is designed to perform reconnaissance and special tasks, in particular, to provide targeting coordinates for barrel artillery and multiple rocket launch systems (MLRS) at the battalion level.

In total, during the war in the eastern Ukraine, according to OSINT research by InformNapalm alone, more than 2,600 Russian servicemen from 101 units of the Russian Army and Russian law enforcement agencies were identified in Ukraine, as well as 51 types of Russian weapons and military equipment that could not have been captured in combat and apparently were secretly brought to the Donbas from the Russian Federation. Main battle tanks of 5 modifications which are not in service with the Ukrainian Armed Forces have been identified among the equipment that was transferred to the Donbas from the Russian Federation.