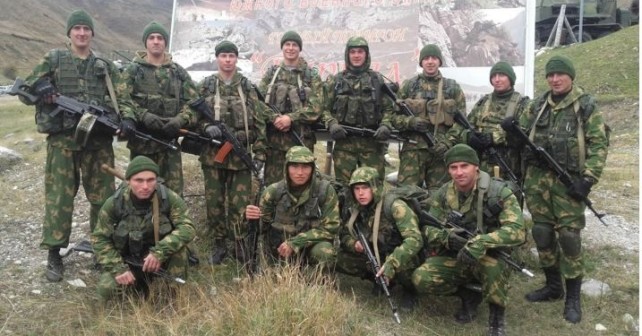 According to the InformNapalm’s operational data, the Russian military command has started the process of concentration of fresh forces in the Ukrainian border area of Rostov Oblast with the intention of further deployment in Donbas.

Particularly, a tactical detachment from the 8th separate mountain motorized rifle brigade (military unit No. 16544, Borzoi, Republic of Chechnya, Russia) is located in close proximity to the state border of Ukraine, to the South from khutor Olkhovsky (Kuibyshev raion, Rostov Oblast). At this moment the unit undergoes the process of ‘pre-assignment adaptation’ there. In other words, the Russian servicemen get rid of all standard stuff and get accustomed to the role of ‘Novorossiya’ militants giving themselves a battle seasoned look.

According to the same data, the unit transferred to the Ukrainian border consists only of contract soldiers with quite some battle experience earned in North Caucasus; all of them are ‘volunteers’ who agreed to come to Donbas hoping to get some extra profit (bonuses for being ‘in field’, for participating in combats, etc). This is going to be not the first trip to Ukraine for some of those servicemen. It is also known that before arrival to Rostov Oblast, this detachment had had combat and organizational trainings in the ‘Daryal’ mountain camp in the Northern Ossetia (the 54th intelligence training center).

We’d like to remind you that this is not the first ‘Ukrainian assignment’ of the 8th brigade to Donbas, please check out the related topics:

4 Responses to “Russia Gathers Fresh Forces for Deployment in Donbas”