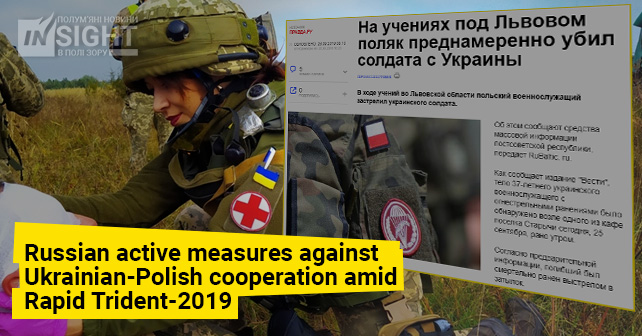 Russia has been carrying out media PSYOPS against Ukrainian-Polish cooperation at the time of the international multinational drills Rapid Trident-2019. This conclusion was made by volunteers of InformNapalm while analyzing numerous fake news reports and the context of their dissemination on the web.

According to StopFake, on September 25, a fake news story was actively circulated in the Russian and some Ukrainian media, alleging that “a Polish soldier deliberately shot a Ukrainian soldier” during the military drills near Lviv. The press service of the regional police headquarters of the Lviv Oblast denied the report.

To enhance the media and psychological impact, the report contains a photo in which a police officer and witnesses allegedly inspect the crime scene. As it turned out, it was a photograph from a a murder scene in Odessa which appeared in the news in 2018. The fake story was disseminated not only through web sites controlled by the Russian Federation, but also through some hacked Ukrainian regional news sites.

Apparently, this fake report is a part of a broader coordinated media PSYOPs of the Russian Federation, and it is being disseminated with the aim of discrediting international military cooperation between Ukraine and Poland. 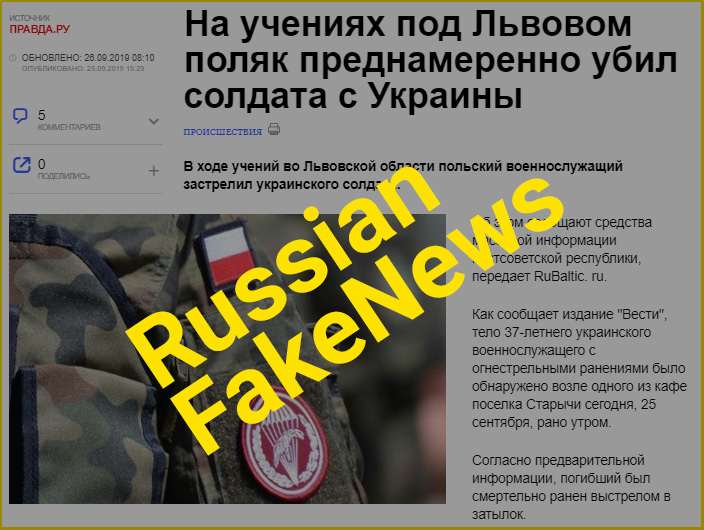 Ukraine has been hosting international military drills Rapid Trident-2019 at the Yavoriv training range in the Lviv Oblast. These multinational drills with the participation of military personnel from 11 countries started on September 13 and are ending on September 28. There were no incidents reported during the drills. Apparently, this is one of the main causes of irritation for the Russian propagandists, as there are almost daily reports of the deaths or injuries of servicemen of the Russian Armed Forces and the Russian Guard during their war games.

On September 20, InformNapalm analysts also reported about signs of psychological pressure on Ukraine by the Russian Federation through demonstrative redeployment of military equipment in the Rostov Oblast.

The meaningful military cooperation and friendly relations between Ukraine and Poland remain a major irritant for Russia. Russian hybrid war think tanks are holding PSYOPS and applying active measures against Ukraine through the media, diplomats, non-governmental organizations and individual actors (mercenaries and lobbyists). They use disinformation and fake news reports, as well as manipulate news pegs.