Russian radars in Ukraine can be verified with satellite imagery On February 24, 2021, international volunteer community InformNapalm published imagery of a Russian Kasta-2E1 radar operating in the non-government-controlled area (NGCA) of eastern Ukraine. The imagery was taken by a “mini-UAV” belonging to the Organization for Security and Co-operation in Europe Special Monitoring Mission (OSCE SMM) to Ukraine.

This was the first OSCE SMM imagery of Russian radars in eastern Ukraine to be made public. The SMM detailed the encounter in daily report 38/2021, in which it described observing a 51U6 Kasta-2E1 target and acquisition radar in addition to artillery pieces at the training area near Buhaivka. Using past OSCE SMM reports, the DFRLab found other radar sites throughout non-government-controlled Ukraine. Mapping out these additional positions paints a more complete picture of the extent of Russian radar deployment in non-government-controlled eastern Ukraine.

These surveillance radars are likely manned by Russian service personnel and are often observed at sites with Russian electronic warfare vehicles. They are probably used to aid detection of Ukrainian and OSCE SMM drones. Map visualizing the location of four reported radar sites in non-government-controlled areas along the line of contact. (Source: @Michael1Sheldon/DFRLab)

InformNapalm’s article showed a single Kasta-2E1 radar at a well-known training area near Buhaivka. This training area often appears in OSCE SMM reporting for having heavy weapons in violation of withdrawal lines as outlined in the February 2015 Minsk II agreements. According to the agreements, heavy weapons of a caliber over 100mm in NGCA must be pulled back 25km in accordance with the Minsk I Memorandum as of September 19, 2014. Radars like the Kasta-2E1 are not in and of themselves subject to the Minsk Agreements.

Volunteers of #InformNapalm received an exclusive visual proof of the reports about the first official sighting of the #Russian 51U6 Kasta-2E1 radar station in the occupied part of the #Ukrainian #Donbas.
Coordinates 48°24’50.2″N 38°52’36.9″E.https://t.co/KBxsVV01As pic.twitter.com/aw28fQXhhj

The pullout of foreign military presence is, however, a key measure of Minsk II, which the Kasta-2E1 is in violation of given its Russian Federation provenance. This also applies to the other radars discussed in this article. One of the better-known sites for radar sightings in non-government-controlled areas of Ukraine is the airfield near Mospyne. The site has four built up protective areas wherein military vehicles in camouflage nets can be observed on public satellite imagery platforms such as Google Earth. The earliest SMM report of radar activity near Mospyne was on January 19, 2018. This report noted the presence of a P-15 or P-19 radar system. This is relatively close to the time where the site first became visibly active on satellite imagery in October 2017.

In daily report 40/2020, the OSCE SMM reported observing three electronic warfare systems (one R330Zh Zhitel, one R-934B Sinitsa and one RB-636 Svet-KU) along with an active 1RL134 (P-19) radar near Verbova Balka. This was likely in reference to the same site as detailed above, which lies about a kilometer north-east of Verbova Balka.

Satellite imagery showing a radar near Fashchivka as reported by the SMM. (Source: Google Earth)

On two separate occasions in February and March 2019, the SMM reported observing a P-19 radar on top of a slag heap near the town of Fashchivka. Google satellite imagery shows this position very clearly in imagery dating back to April and June 2018. The system in the satellite imagery however appears to be based on a Kamaz chassis with the radar mounted to the rear. This would suggest a Kasta-2E1 rather than a P-19. It is unclear if this is the same system as was observed by the SMM. 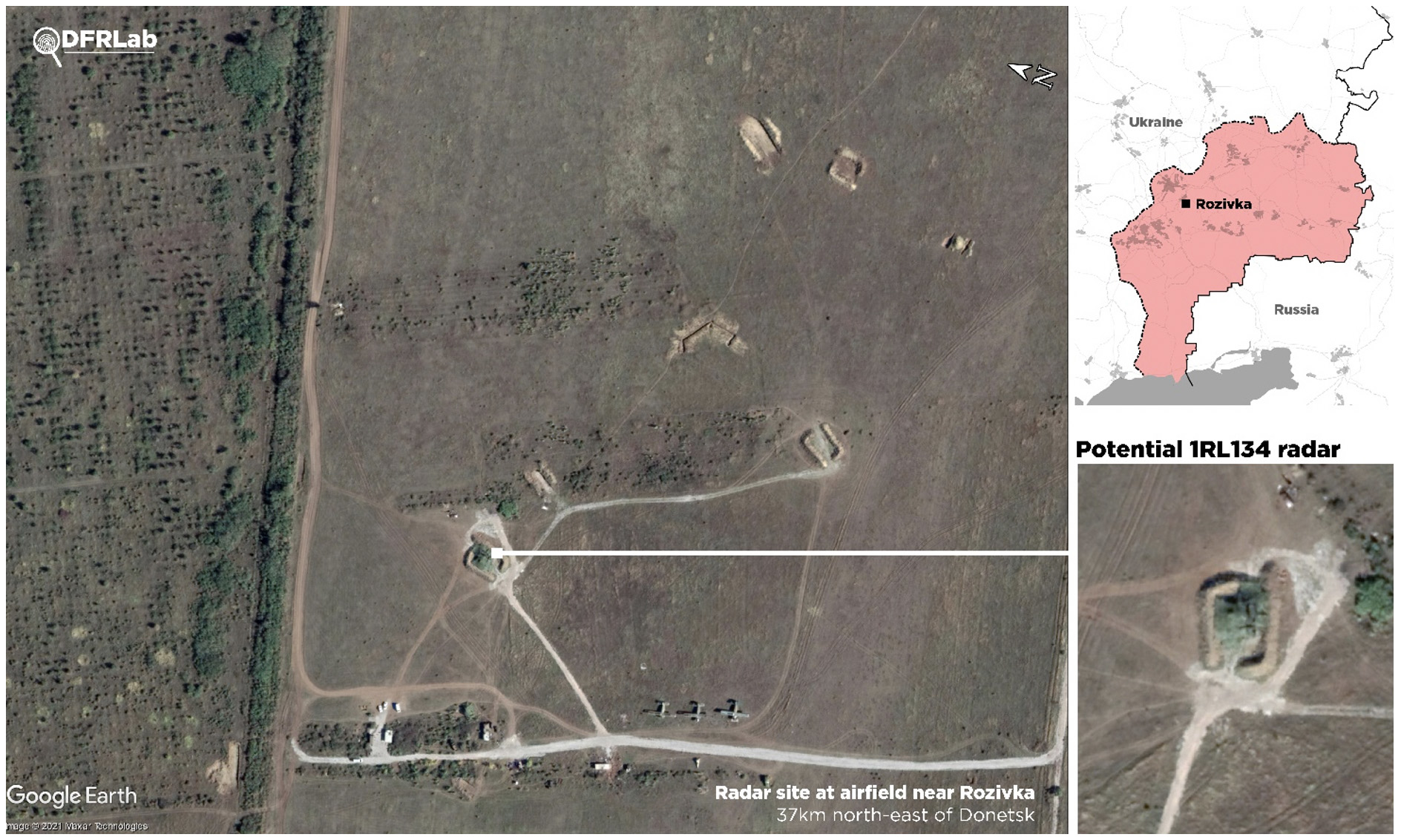 On August 8, 2018, the OSCE SMM reported that one of its long-range UAVs spotted a P-19 radar near Rozivka. Satellite imagery of the area reveals a prepared area of trenches and defensive berms on an old airfield. Closer inspection of imagery dating back to October 2018 revealed two clusters of camouflaged vehicles, one of them appeared consistent with the reported P-19.

It is unclear if there are more radar sites like these in NGCA. The ones in this article were all dispersed along the center of the front lines. It is possible that other sites exist on the peripheries.

Michael Sheldon is a Research Associate with the Digital Forensic Research Lab.

Distribution and reprint with reference to the source is welcome! InformNapalm materials are available under a public license Creative Commons Attribution, CC BY. The condition for using our materials is a hyperlink to the original source in the first or second paragraph of your publication. InformNapalm social media pages: