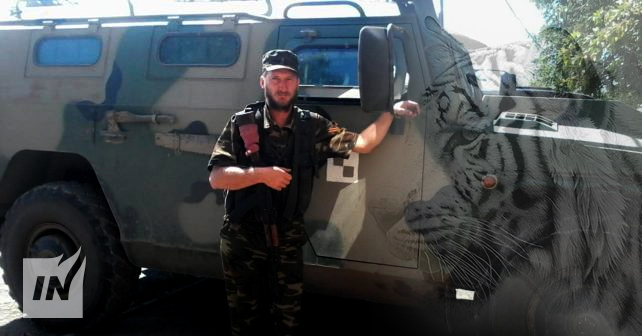 InformNapalm international volunteer community continues identification of unique weapons and equipment, seen in Donbas and included in the arsenal of the Russian-terrorist troops. This work is an important aspect of collecting evidence of Russian hybrid aggression against Ukraine. Recently, InformNapalm investigators demonstrated how Selfies with T-90A tanks in Donbas roamed from accounts of Russian tank crews into accounts of terrorists on social networks. Our investigation had identified a main battle tank (MBT) of the 136th Motorized Rifle Brigade of the Russian Army from Dagestan. Today, as part of another investigation, we are having a look at a GAZ Tigr infantry mobility vehicle (IMV) of a reconnaissance company from the same 136th Motorized Rifle Brigade. This type of equipment has also been noticed being in service with Russian-terrorist troops in Donbas.

New evidence has been found in a photo album of a 43-year-old Russian mercenary Oleg Rakhimov (archived account, photo album, contacts), who came all the way from the Altai region of Russia to spread the so-called “Russian world” in Donbas. He has posted in his account a lot of interesting photos with modern Russian weapons and equipment deployed to Donbas. Among his photos there is also a picture (archive) with a Tigr (GAZ-233014) IMV, posted on March, 16, 2016. It is noteworthy that the door of the Tigr shows a tactical marking familiar to the OSINT-researchers since 2014 – the emblem of the 136th Motorized Rifle Brigade (military unit # 63354, city of Buinaksk and Botlikh village, Dagestan) of the 58th Army of the Southern Military District of the Russia. 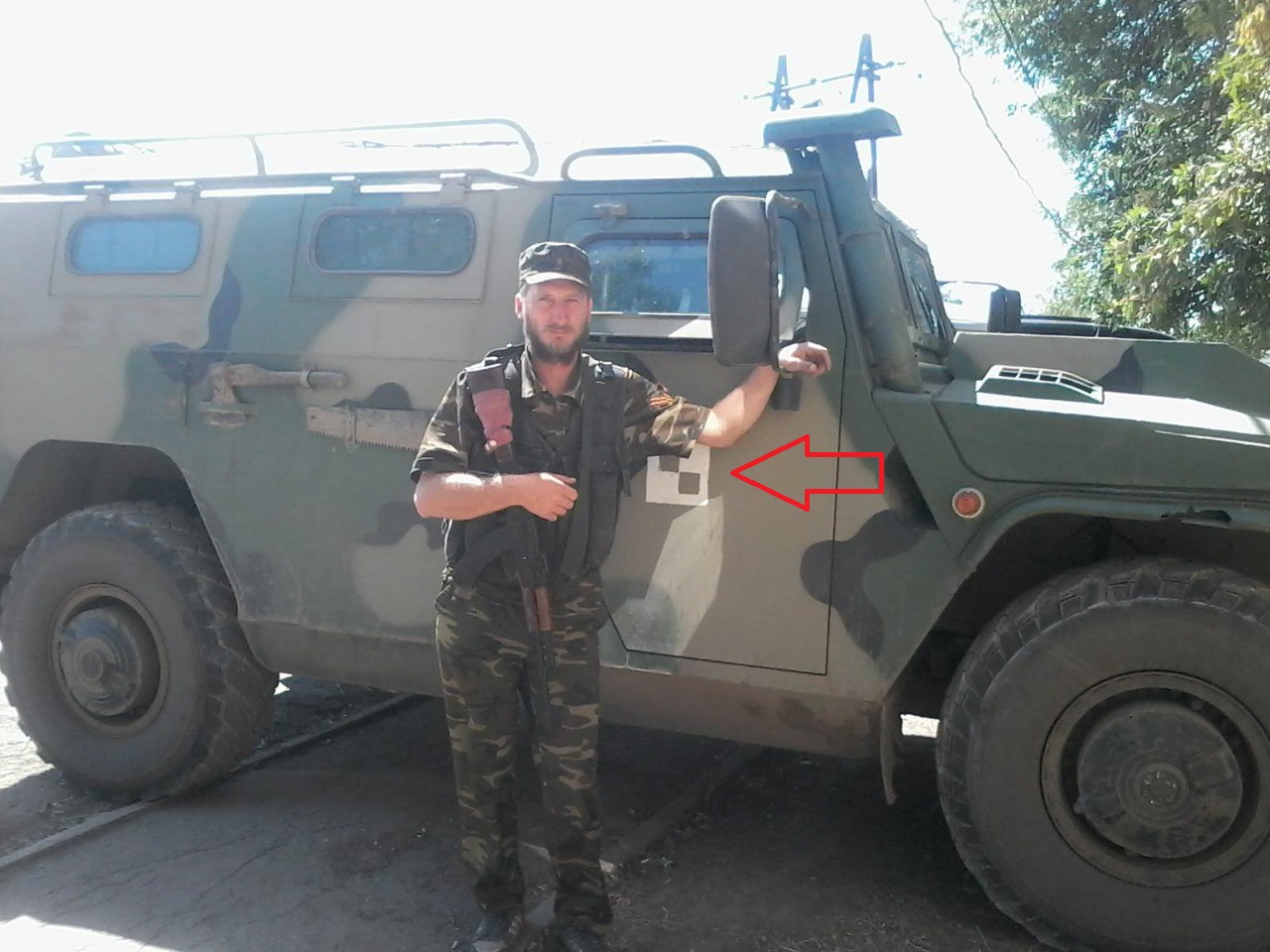 Such IMVs with the tactical markings of the 136th Motorized Rifle Brigade have repeatedly featured in the InformNapalm investigations before. In February 2015, we published the article “Tracking Down A Scout From The 136th Brigade”, which also contains photos proving the fact of of a “Ukrainian mission” of the combined reconnaissance unit from the 136th Motorized Brigade from Dagestan with similar Tigrs showing the same tactical markings. 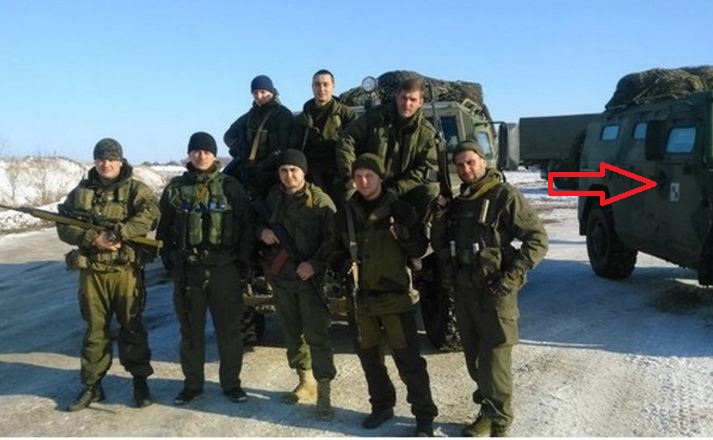 Tigrs from this Dagestan infantry unit also appeared in other publications, including the article Cops from Chechnya on a “Ukrainian mission“, where Chechen Kadyrov’s police force fighters pose with such IMV in the background. Although they covered the number plate of the vehicle on the photo, they forgot to get rid of the tactical marking of the 136th Motorized Rifle Brigade on the vehicle door. 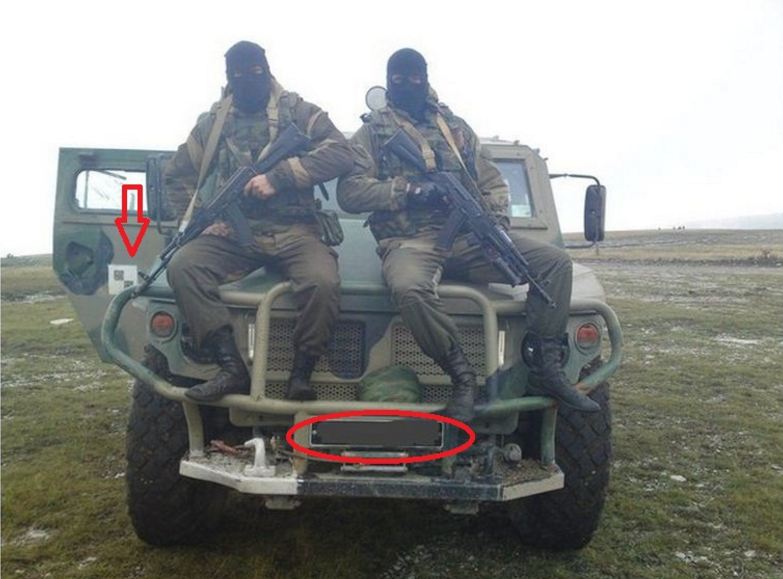 It is worth reminding, that Russian invaders actively used Tigr IMVs for blocking and assaulting the Ukrainian military facilities during the occupation operation in the Crimea. The video below shows the unique footage of the Tigrs convoy movement from Kazach’ya Bay in Sevastopol in early March 2014.

Apart from the Tigr IMV, in Rakhimov’s album there are photos 1, 2 (archive 1, 2)  with the latest armored personnel carrier (APC) BTR-82, which is in service with the Russian Army exclusively. New armored vehicles of this BTR modification have often flashed in Donbas, also in publications of Russian bloggers. They looked spectacular on camera and burned alike when targeted by Ukrainian forces. 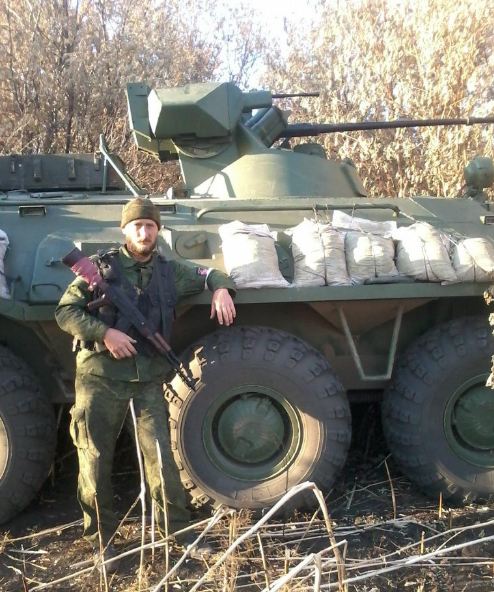 It bears reminding that OSINT investigations of InformNapalm international volunteer community have documented about 20 uniquely Russian types of weapons and equipment, which were sent to Donbas together with professional military personnel from Russia. This is direct evidence of intervention and aggression on the part of the eastern neighbor. Inform Napalm volunteers have also documented more than 145 incidents involving military personnel and / or equipment of 72 military units of the Russian Federation (Russian army, Main Intelligence Directorate (GRU), Russian Security Service (FSB), Russian Ministry of Internal Affairs, Federal Penitentiary Service of Russia (FSIN)). See  Professional Russian Army in Ukraine. Database and Visualisation and Units tab of our database.

Only in our investigationsm the 136th Motorized Rifle Brigade of the Russian Army has appeared in more than five episodes of so-called “Ukrainian missions”. It means that the command and the personnel of the brigade should be brought before a military tribunal either as defendants or witnesses about in the case on war crimes in the territory of a sovereign neighboring state. Russian and western journalists seeking the truth, can now start to ask uncomfortable questions to the command of military units listed in the database.

This publication was prepared by OSINT-experts of the InformNapalm international volunteer community. We thank VK social network user Любо Пытный for collecting and posting photos that document the facts of Russian aggression.

We urge readers to actively share InformNapalm investigations on social networks. Broad public awareness of these publications is a major factor in the information and actual warfare.

3 Responses to “Photo hunt for Russian Tiger in Donbas”