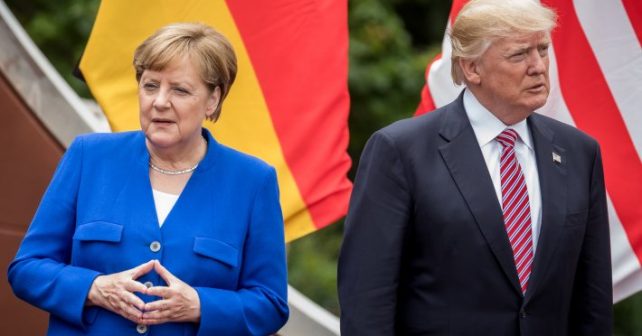 The story with Siemens turbines supplied to Crimea is gaining momentum. It started last week, with a few photos of some mechanisms in a Crimean port appearing on the web and no official information. However, soon the story about Siemens supplying turbines to Crimea was taken up by Reuters. The German industrial giant immediately denied its involvement in the story, while Russians started talking about buying turbines in the secondary market (if such a thing exists).

However, already this week it became clear that the German turbines did make it to Crimea, and now Siemens wants to sue the Russians, since the contract contained a specific clause banning to supply the turbines to Crimea. It looks like the lawyers of the German concern did a good job, formally securing themselves from the legal point of view. But this may not be enough.

It all looks like an attempt to circumvent the sanctions introduced after the annexation of Crimea by the Russian Federation. Since 2014, Russia has been working on “separating” Crimea from Ukraine, making the region economically independent from Ukraine and dependent on Russia. To this end, Crimea was “hooked” not only on Russian goods, but also on Russian energy. To completely get the Crimean energy sector under control, the Russians planned to build a power bridge between Kuban and Crimea. Formally, it was decided to build a thermal power plant (TPP) on the Russian mainland in Taman which was supposed to supply electricity to Crimea over the power bridge.

Taman is a village in the Krasnodar Territory with a population of 10,000. It is located a few kilometers from the spit island of Tuzla, directly opposite the Ukrainian city of Kerch. An international sea ​​port is being built next to the village. However, the construction of the power plant never began. Last year, a tender to build the Taman plant was canceled receiving no bids. 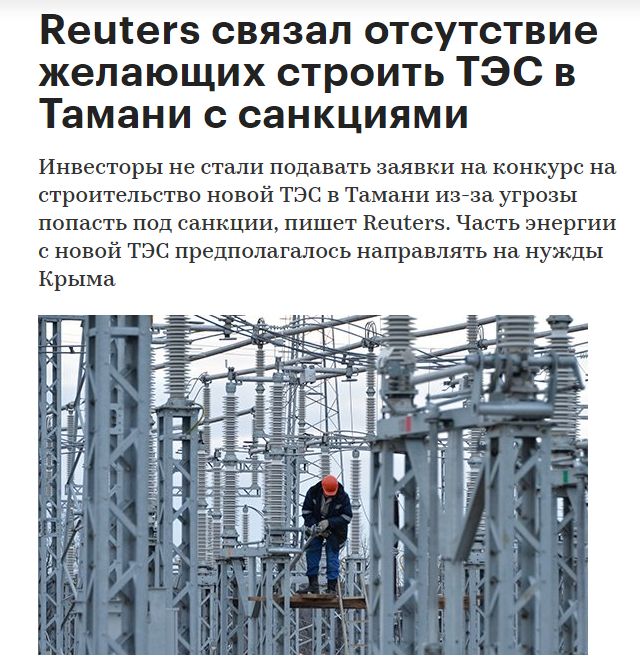 According to Reuters ([1]), investors were not interested in building a TPP in Taman because of concerns over possible sanctions. That is, any participation in the construction of a TPP in the Russian Taman could entail sanctions, since the electricity from this plant would go to the annexed Crimea. It was generally known, but it did not dissuade Siemens from negotiating with the construction contractor, Tekhnopromeksport, to supply equipment to Taman. 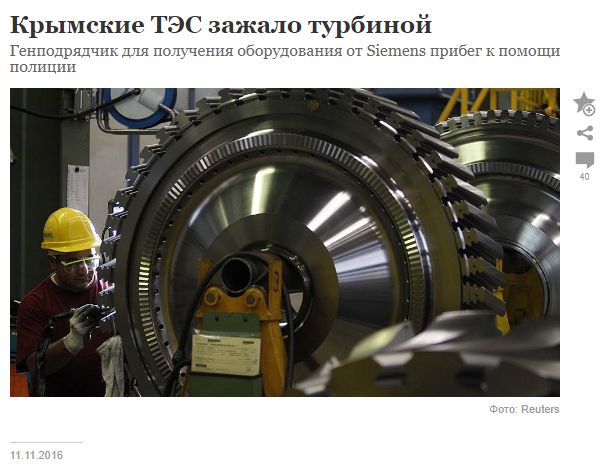 By September 2016, it became clear that Tekhnopromeksport was not going to build a TPP on the Taman peninsula, and that all the equipment would most likely go to Crimea. 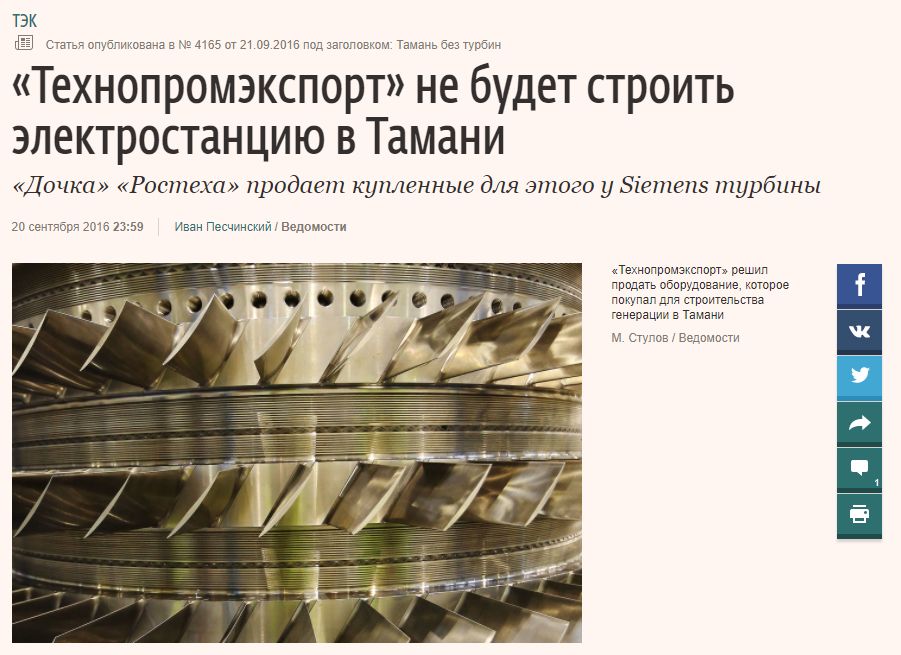 Apparently, the German concern understood the delicacy of the situation and kept delaying the delivery of the turbines, meanwhile looking for a compromise solution (October-November 2016). 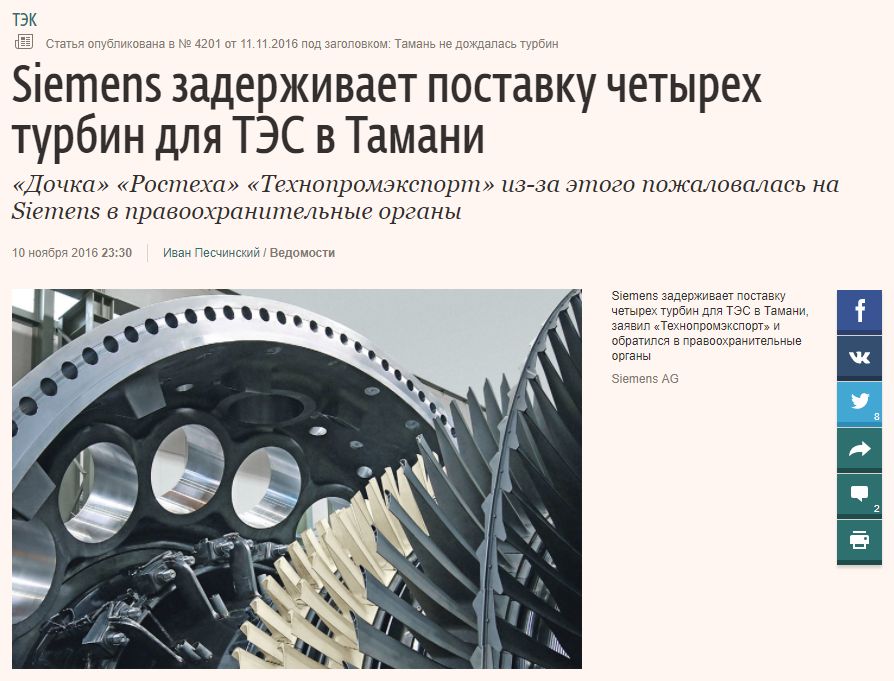 However, the turbines had already been manufactured, and the Russian market was viewed as a potentially large one. Probably, the company had to make concessions to the Russian side not to jeopardize its other projects in Russia.

As a result, all four turbines were delivered to the Russian company.

“We have delivered the turbines to Tekhnopromexport,” said Nikolai Rotmistrov, head of energy and gas production at Siemens in Russia, adding that the contract stipulated the equipment should be used on Russia’s Taman peninsula.”

However, even the supply of these turbines for a TPP in Taman would have effectively helped the annexation of Crimea. And the German company knew it from the very outset of the negotiations.

Now, the German concern is suing in Russian courts to ban the use of the turbines in Crimea. The lawsuits are most likely to be lost in Russia, and the case would be embroiled in a long and tedious proceedings in some independent arbitration court. Russia would ignore any demands to cease and desist and would go on building the station in Sevastopol.

Another unlikely player with a vested interest in this scandal is the US. We wrote recently about the extraterritorial nature of the US sanctions. For violating sanctions regime against Cuba or Iran, American regulatory authorities fine foreign companies for billions of dollars every year. Foreign companies are compelled to pay those fines in order not to lose their access to the American market. 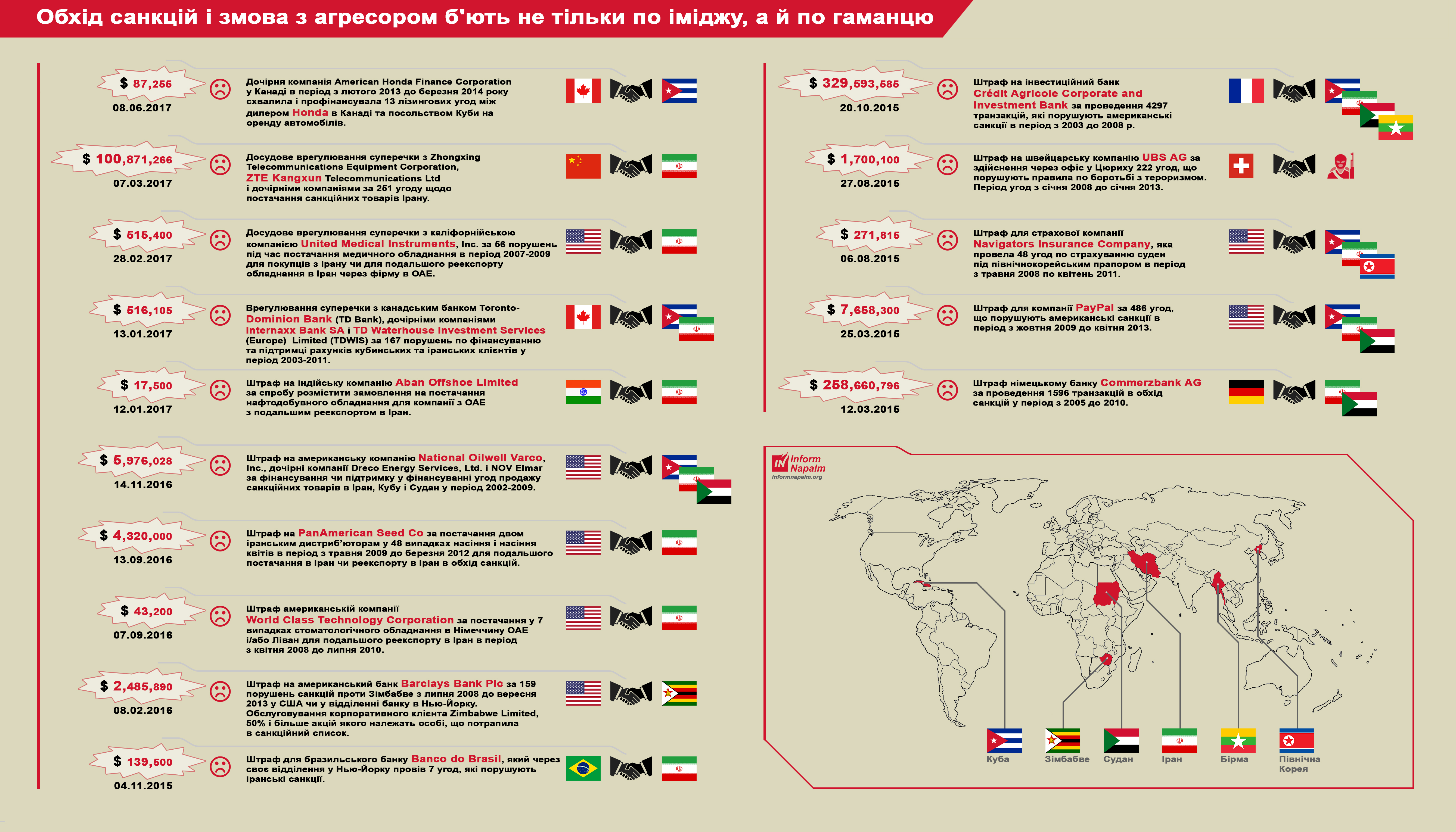 Besides, an undeclared war of corporate penalties has been waged between the United States and the European Union in the recent years. While the US environmentalists examine emission levels of German Volkswagen, European bureaucrats are actively penalizing American Internet giants.

Earlier this year, VW agreed to pay $4.3 billion in fines amid the diesel scandal.

In turn, the European Commission fined Google €2.42 billion for manipulating search engine results. Facebook was fined “a mere” €110 million for misrepresentation when buying WhatsApp. And the list goes on.

The situation is further complicated by the stand of the US President Trump, who had already noted a “massive trade deficit with Germany”.

It is possible that the case with the sale of the German turbines to Crimea will become a welcome development for the American negotiators, who would now have another trump card in their bargaining with Europe. At the same time, the EU and Germany would have to make some concessions to avoid a hefty penalty for Siemens from the Trump administration.

The hitherto regional problem of the power supplies for Crimea and might become one of the key issues in the relations between the EU and the US.

The publication has been prepared by Anton Pavlushko especially for InformNapalm.

No Responses to “Siemens in Crimea: Trump’s new trump card in bargaining with Europe?”