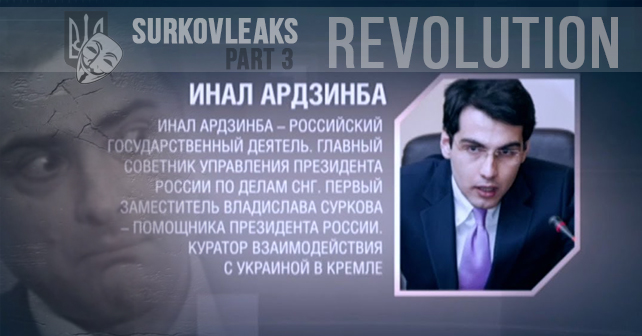 In January 2017, the popular Russian business newspaper Vedomosti reported that Russian presidential aide Vladislav Surkov accepted the resignation of his first deputy, and that this resignation may be related to a series of publications on the leaked correspondence of Surkov’s staff exposed by Ukrainian hackers. These dumps of correspondence were provided exclusively to InformNapalm volunteer intelligence community and published on the community’s website in late 2016. The story has unfolded further, as the hacktivists extracted new dumps of correspondence associated with the head of the Department of the Administration of the President of Russia, the first deputy presidential aid Inal Ardzinba.

The hacktivists of the Ukrainian Cyber Alliance and CyberHunta handed to InformNapalm for further investigation two more dumps from mailboxes associated with Surkov. fedor_fedorov53@mail.ru and viktor_vinogr@mail.ru .

viktor_vinogr@mail.ru – there were messages sent to this mail box with analytical notes from the Russian General Consulate in Odessa, Ukraien (genconrfodessa@mail.ru – this address is indicated as a contact on the website of the Russian Foreign Ministry http://www.odessa.mid.ru). Having analyzed the files attached to the messages and their properties, InformNapalm volunteers came to the conclusion that the mail-box was managed by Inal Batuvich Ardzinba, chief advisor to the presidential Directorate for Cooperation with the CIS Countries. Being Surkov’s deputy, Inal Ardzinb supervised and financed projects of the so-called “soft federalization” of Ukraine: Slobozhanshchina in Kharkiv, Porto-Franco in Odesa, People’s Republic of Bessarabia in Odesa Oblast, People’s Council of Nikolaev in Mykolaiv.

fedor_fedorov53@mail.ru is the e-mail address used by Alla Alexandrovska (she headed the Kharkov regional organization of the Communist Party of Ukraine, MP from 1998 to 2012) and her son Alexander Aleksandrovsky. They were responsible for the Slobozhanshchina project. In the summer of 2016, Aleksandrovska was detained in Kharkiv and has been held in custody ever since. She faces charges of offences pertaining to the violation of the territorial integrity of Ukraine and bribery (part 2 art. 110 and part 3 art. 369 of the Criminal Code of Ukraine). Her son Alexander is also a defendant in the case, but he is hiding from the investigation in Belgorod, Russian Federation, and continues to supervise subversive activities in Ukraine from there. They are charged with attempting to bribe town council deputies of the town of Pivdenne, Kharkiv Oblast, to appeal to the Verkhovna Rada, the parliament of Ukraine, with a demand for federalization of the country. Read more here: 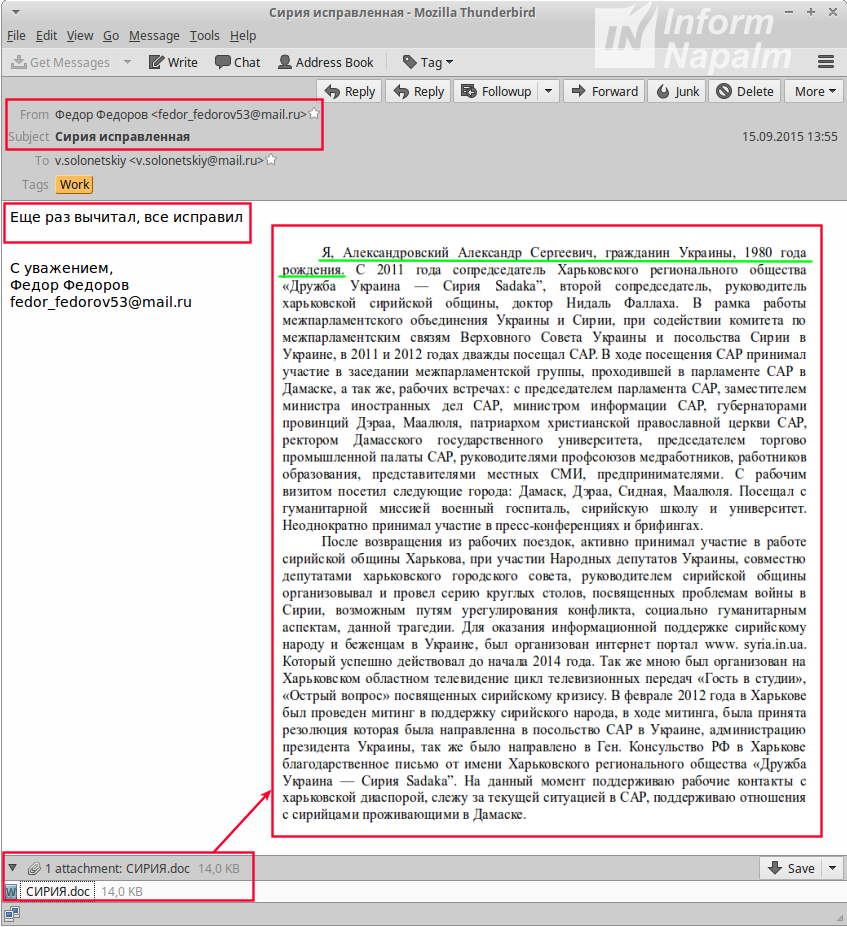 kolokol_2008@mail.ru – Anton Davidchenko, head of the Kolokol [the Bell in Russian] youth organization. He was responsible for planning and carrying out of projects involving provocations and riots in Odessa (Porto-Franco), Zaporizhia (Zaporizhia Working Group on Constitutional Reform), Dnipropetrovsk (Dnipropetrovsk Constitutional Forum), Mykolaiv (People’s Council of Nikolaev) and Kyiv. 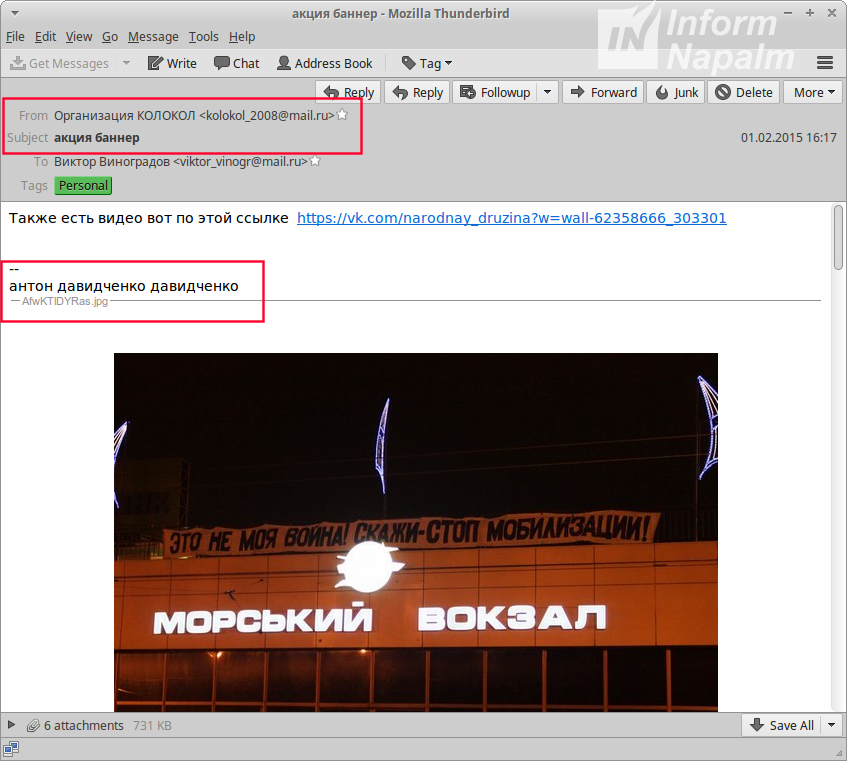 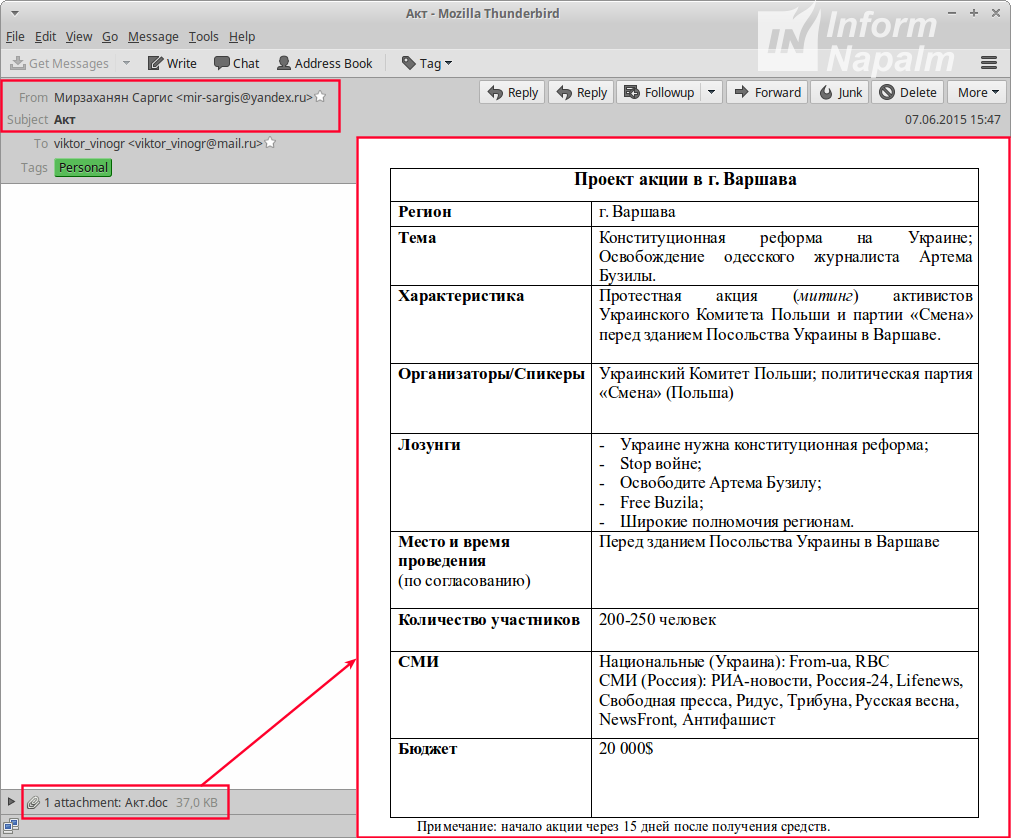 kursk18@gmail.com – Alexey Muratov, Russian MP from Putin’s United Russia party. Muratov is the official representative of the DPR in Russia. 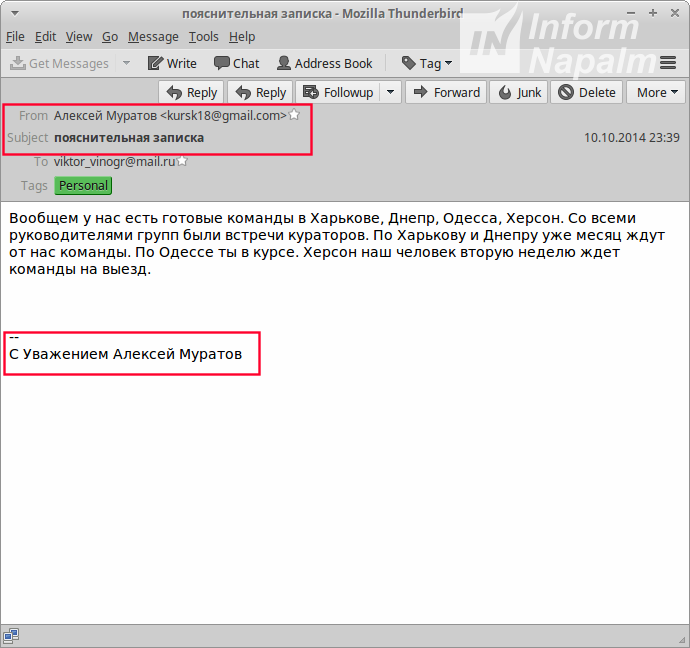 1) The project to seize power in the Zaporizhia Oblast of Ukraine. It was sent as a protected archive in a message from Alexey Muratov on 11/12/2014. Hacktivists cracked the password: wq1234567890. The archive also contains a CV of the project coordinator, a DPR terrorist Volodymyr Novikov ( callsign Alabay). Novikov is the former leader of the security service of the former pro-Russian Party of Regions. 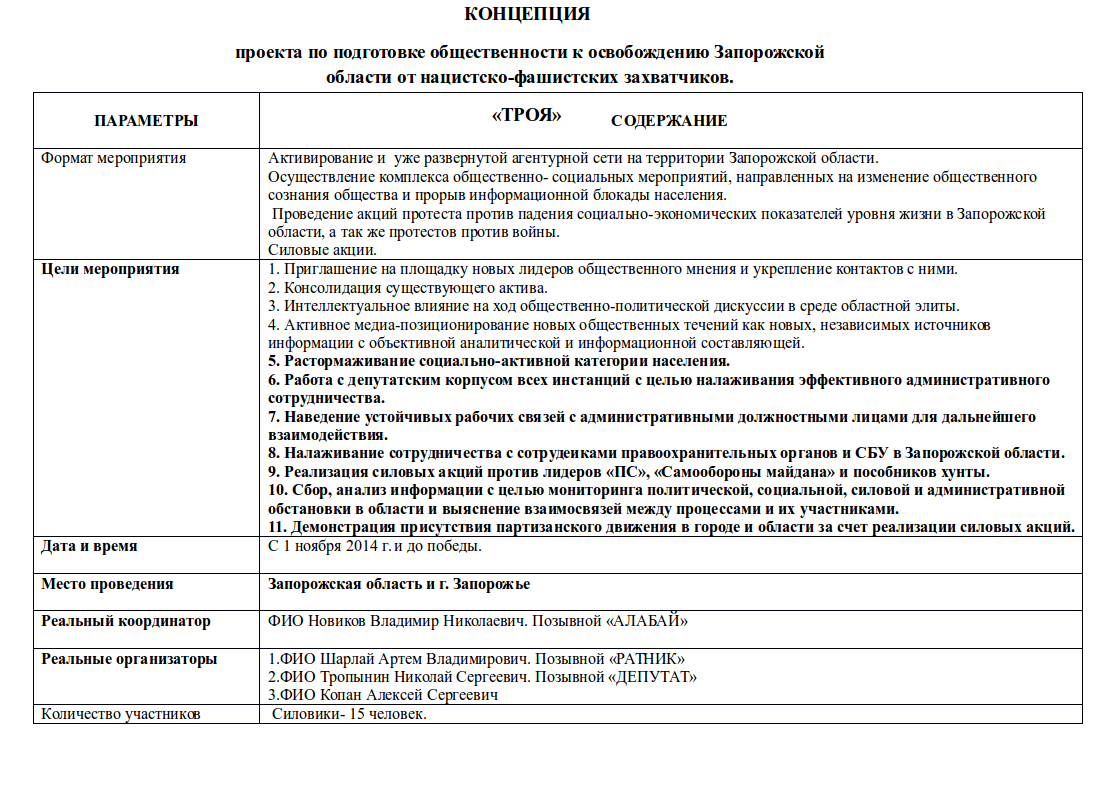 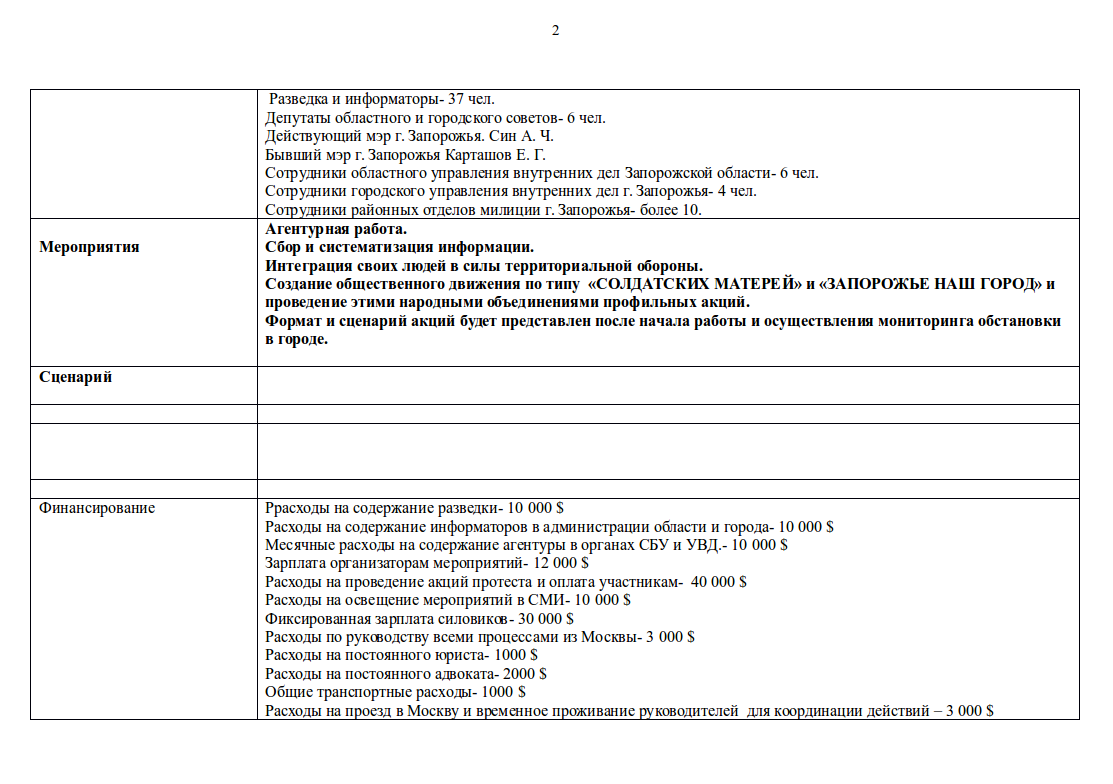 2) The list of current and former employees of the regional office of the Ministry of Internal Affairs of Ukraine in Odesa recruited by the Russian side. It was sent on January 11, 2015, by someone named Luiza Mamedova (e-mail address luiza.mamedova.81@mail.ru) 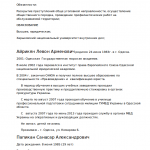 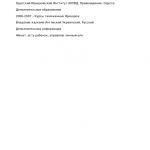 3) The report about provocations carried out in Odessa in early February 2015 evidenced by publications in the media. The message was mailed on February 16, 2015 by Luiza Mamedova. 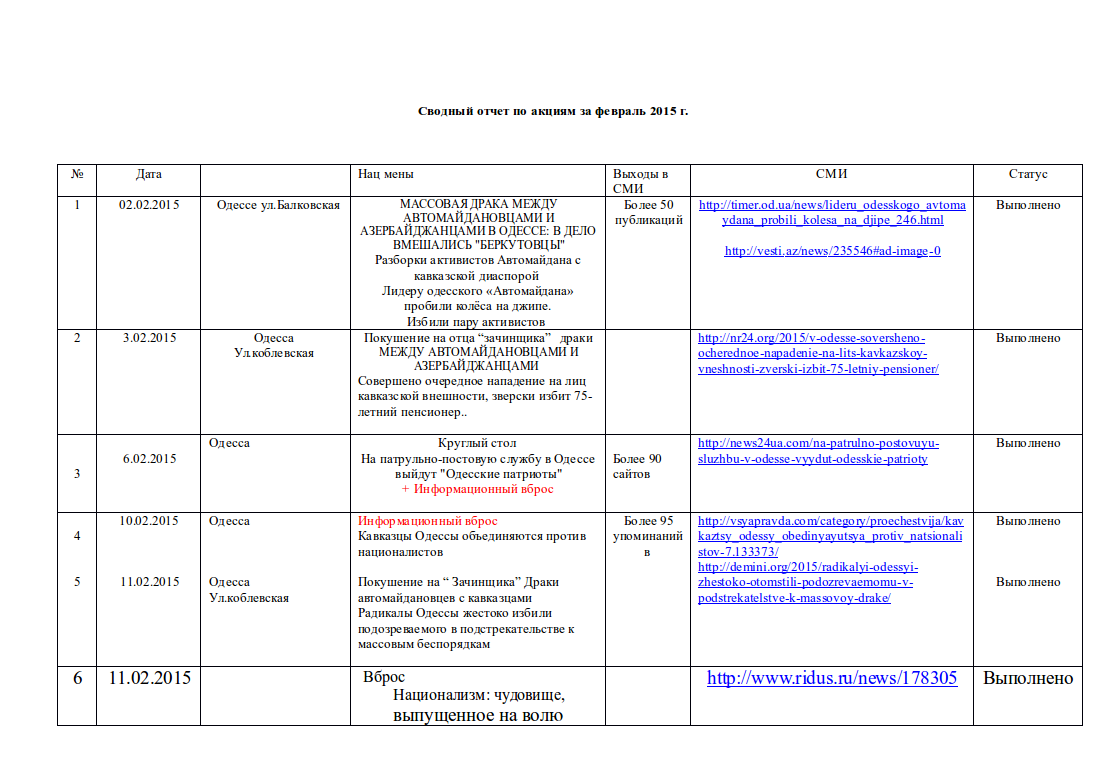 4) Anton Davidchenko, the chairman of the Kolokol youth organization, reports about funds spending in the first half of 2015 for various events (we show here three of those messages as examples). The letters mention the money allocated for the payment for media and online publications. Amounts are indicated in USD. 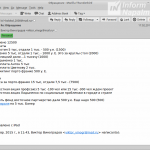 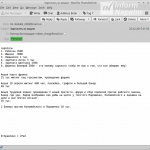 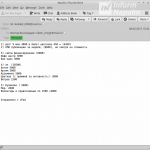 All the events were also filmed on photos and videos, those reports were sent in separate messages. For example, in 2014 and 2015 many anti-Ukrainian graffiti appeared in Odesa in a clearly scheduled pattern. It turns out they were coordinated and approved from Moscow. 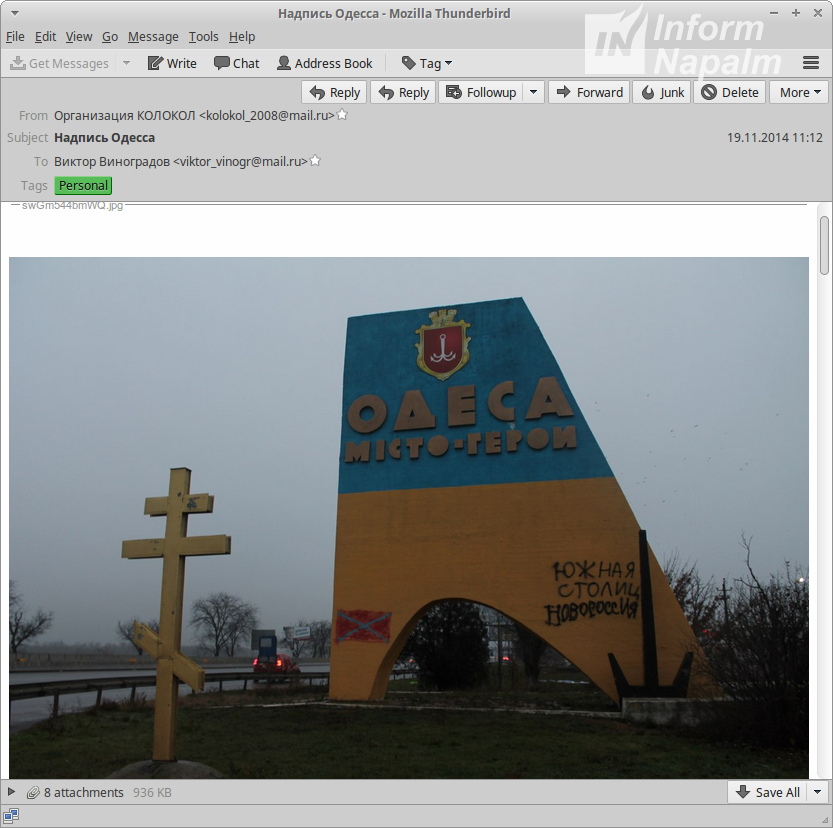 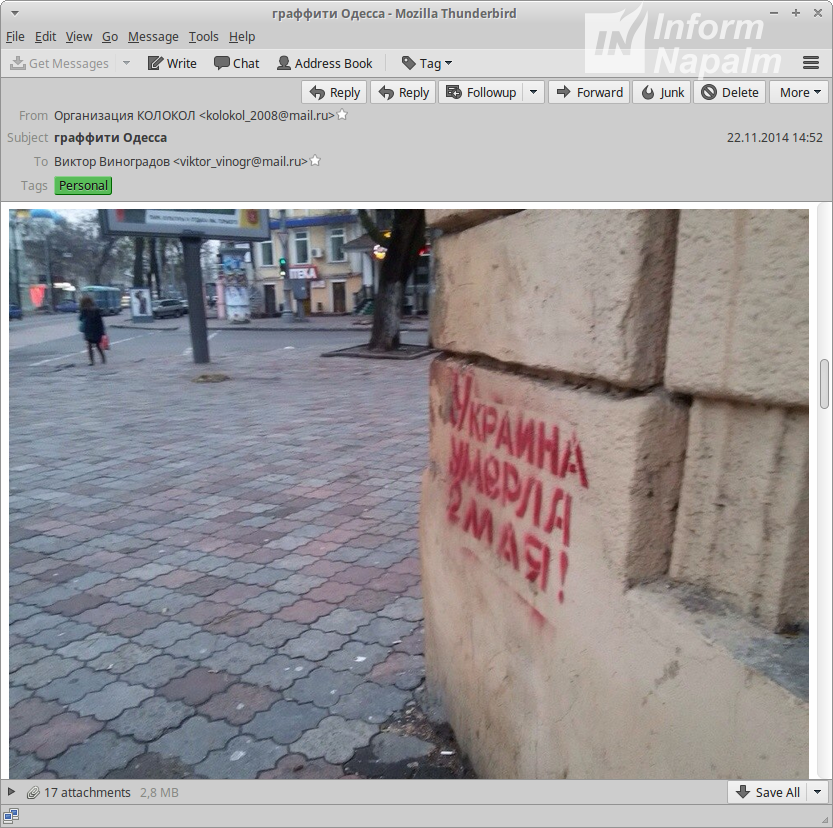 5) A brief summary of the Kolokol youth organization. The summary specifies that their groups were formed in three cities: Odesa, Mykolaiv and Kherson. The document also lists examples of accomplished jobs, with prices. 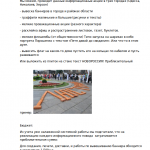 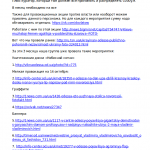 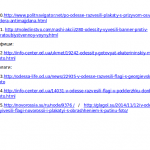 6) A message from Anton Davydchenko with a list of athletic thugs (mostly mid-level athletes in boxing, wrestling, Thai boxing etc.) for participation in violent riots in Ukraine. 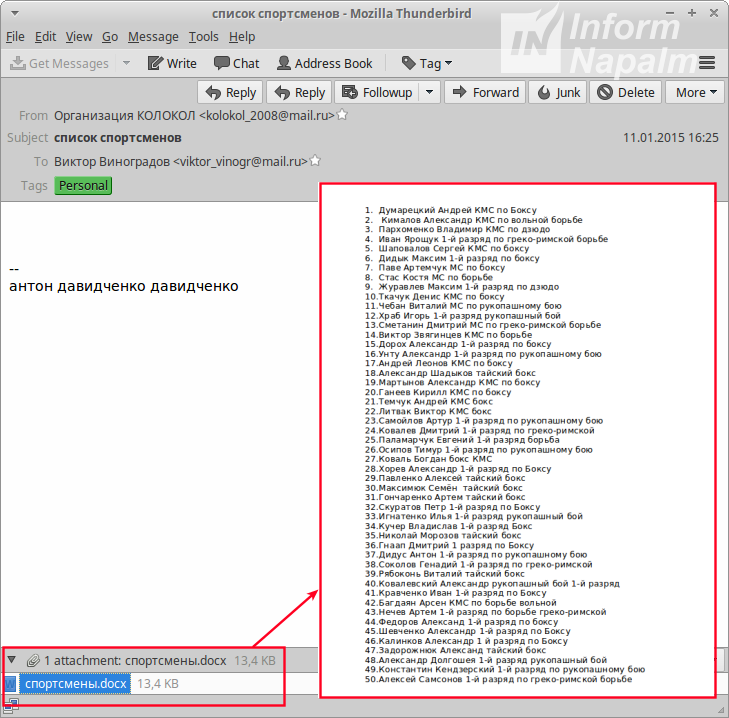 7) Davidchenko reports about paid online publications: RBC, Bagnet, From-UA, Golos.ua, Channel 112, Ukranews. He also indicates the price for paid-for news on Ukrainian TV channels (in the correspondence, there was no evidence of the paid content airing on these TV channels, so it is likely they discussed general prices for airing partisan content). 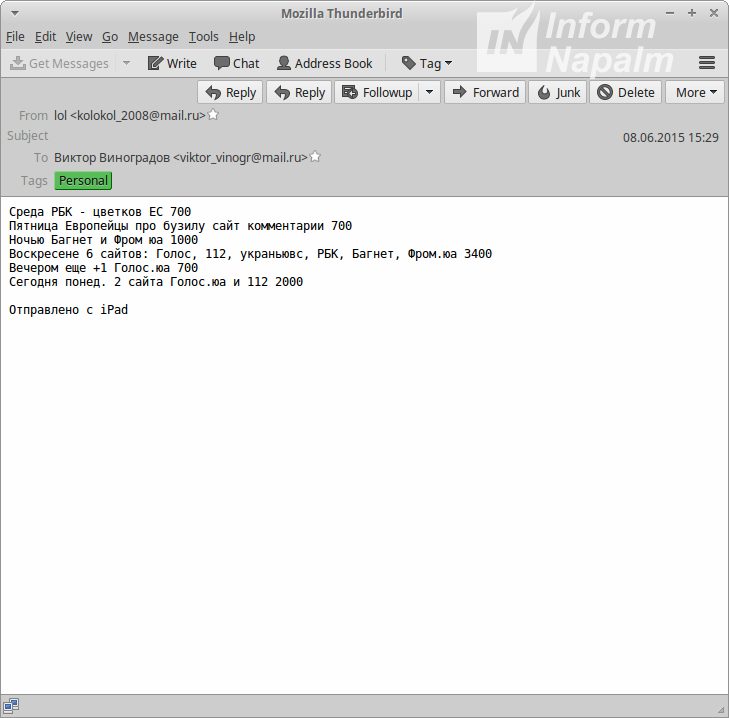 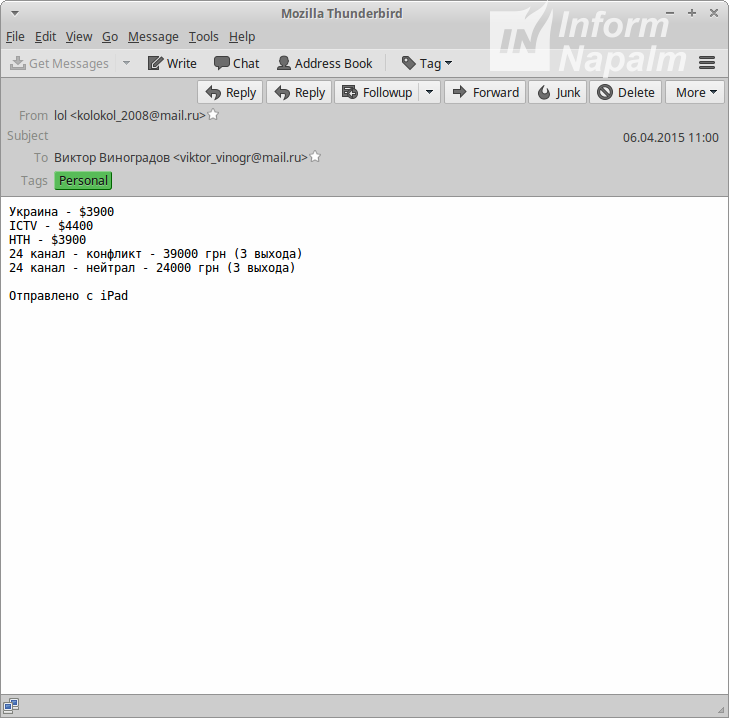 8) Surkov’s assistant Ardzinba sends to Alexandrovsky basic provisions for the draft law “On the special development region of Slobozhanshchina”. 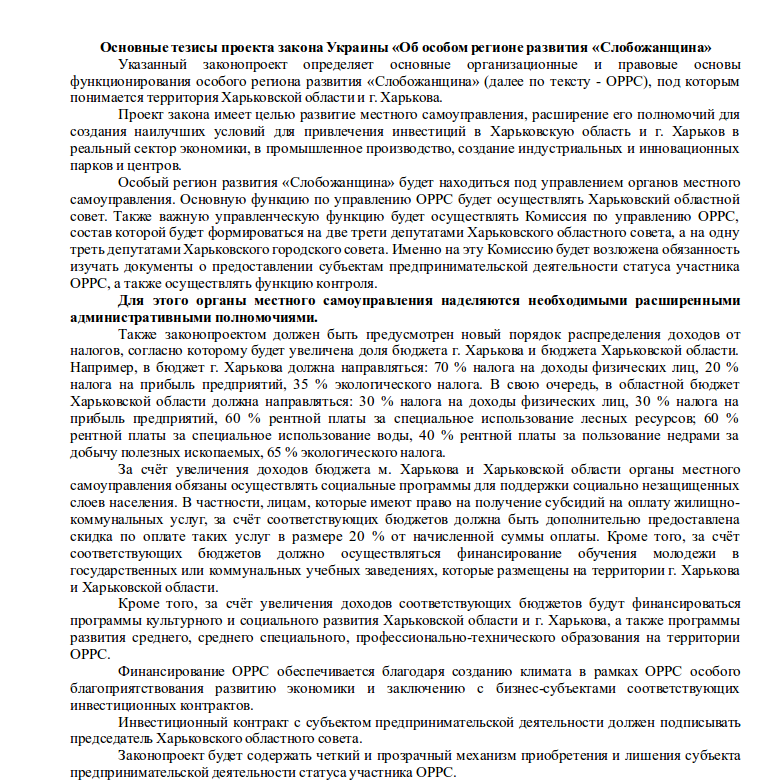 9) Aleksandrovsky sends to Ardzinba cost estimates for the holding of Slobozhanschina public events. 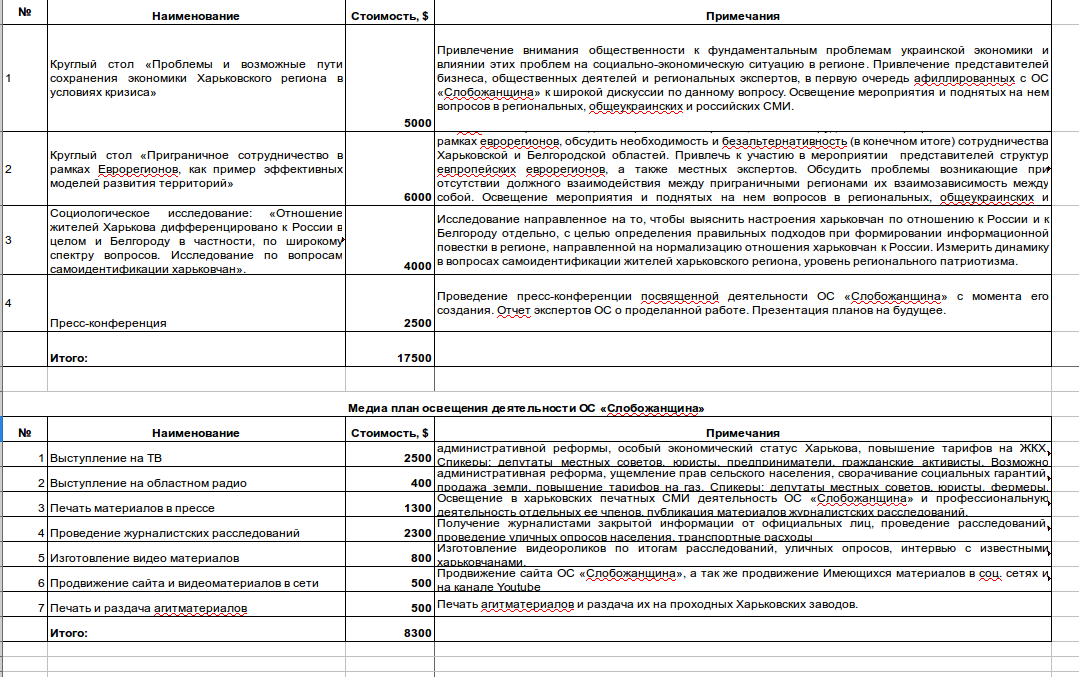 10) Aleksandrovsky sends to Ardzinba a plan for the upcoming regional elections 2015 in the Kharkiv Oblast for approval and requests to provide necessary funding. 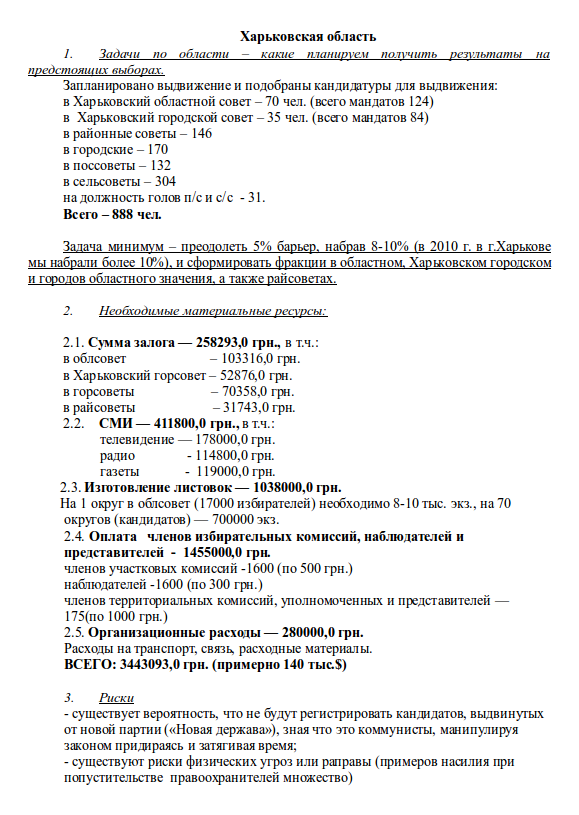 So it was established that a part of the election campaigns in the Kharkiv Oblast was directly funded from Russia, a tactic also applied to influence election outcomes in the US, UK and EU.

11) Someone named Simon Simonov simonov_semen86@mail.ru wrote to Aleksandrovsky that one of the rallies in support of the law on the special development region Slobozhanshchina was banned by the Kharkiv City Council. Simonov also informs that the TV company Simon TV (Objectiv Media Group) refused to broadcast them and offered a refund through the New State election foundation. 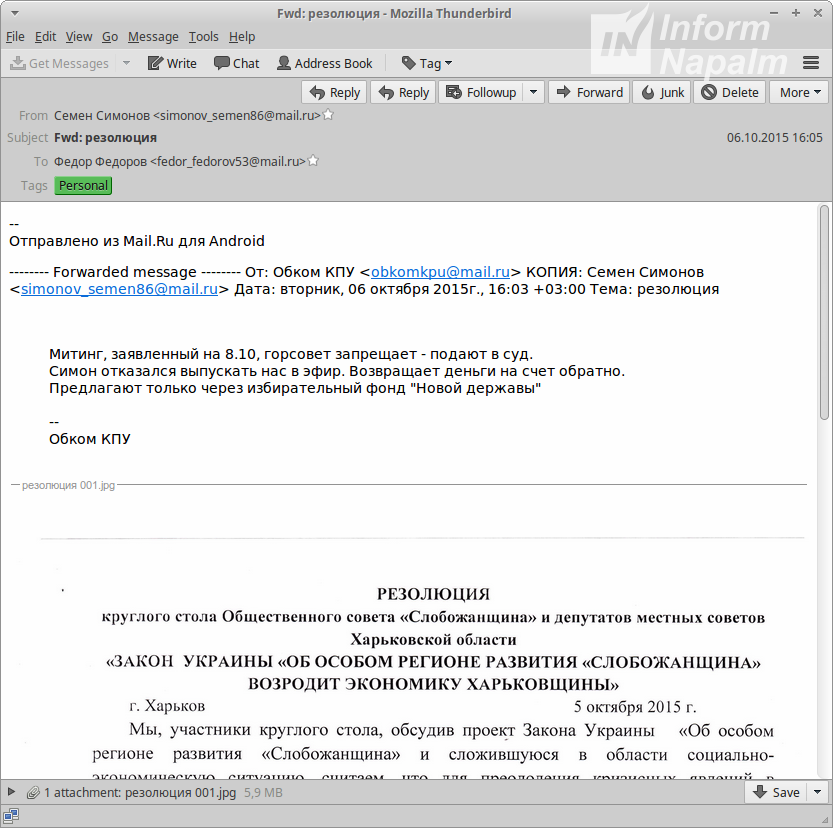 Thus, the non-public data retrieved by Ukrainian hacktivists reveals the details of how Vladislav Surkov, with the help of his assistant acted to destabilize Ukraine, as well as supervised actions of violent gangs.

Evidence data was exclusively provided to InformNapalm by the hacktivists of Ukrainian Cyber Alliance for analysis and processing. InformNapalm Community bears no responsibility for the sources and retrieval of the non-public data.

This publication was prepared by Mikhail Kuznetsov specially for InformNapalm international intelligence community site. Translated by Volodymyr  Bogdanov, edited by Artem Velichko. An active link to the authors and our project is obligatory for any reprint or further use of the material.
(Creative Commons — Attribution 4.0 International — CC BY 4.0 )
For notifications about InformNapalm investigations follow the community page on Facebook.

No Responses to “SurkovLeaks (part 3): analysis of the correspondence of Surkov’s first deputy Inal Ardzinba”