What War are Soldiers from the 34th Brigade of the Russian Army Going to? 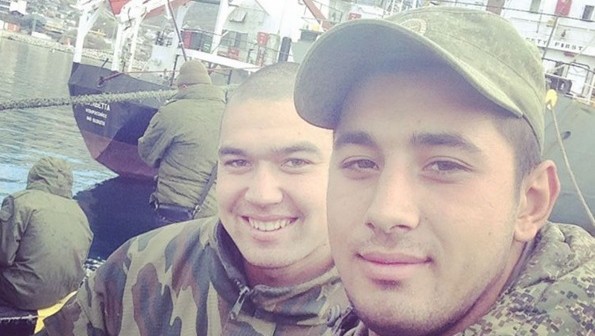 Russian military servicemen have been involved in ground operations in Syria for quite some time. Evidence of it appeared on the Internet in September-October, 2015, including investigations by the international volunteer community InformNapalm [1], [2], [3], [4].

The use of the Russian military forces outside Russia goes in two main stages: the first stage is a hidden deployment of forces and means to a point of future use, followed by the maximum possible period of lies on the diplomatic and highest government levels.

The second stage is obtaining formal permission from the Federation Council on the use of the army abroad and its ‘instant’ expansion, which would produce the effect of a swift and ready to fight army. The bluff, which works, but not for all, and is designed mostly for an internal Russian audience to create the appearance of a powerful army of the pseudo empire.

Such a tactic was used in Crimea and then during the deployment of Russian air forces to Syria [1], [2]. Now, with the active deployment of ground forces happening and the Russians suffering losses on the ground, we hear false assurances from official Kremlin representatives that there are no plans to participate in a ground war. There are no plans, but the facts are there.

International volunteer community InformNapalm conducting an open source intelligence investigation discovered that on November 5, 2015, one of the soldiers of theRussian army, a certain Sergei Lobanov at the port of Novorossiysk made an interesting confession in his blog in Instagram. 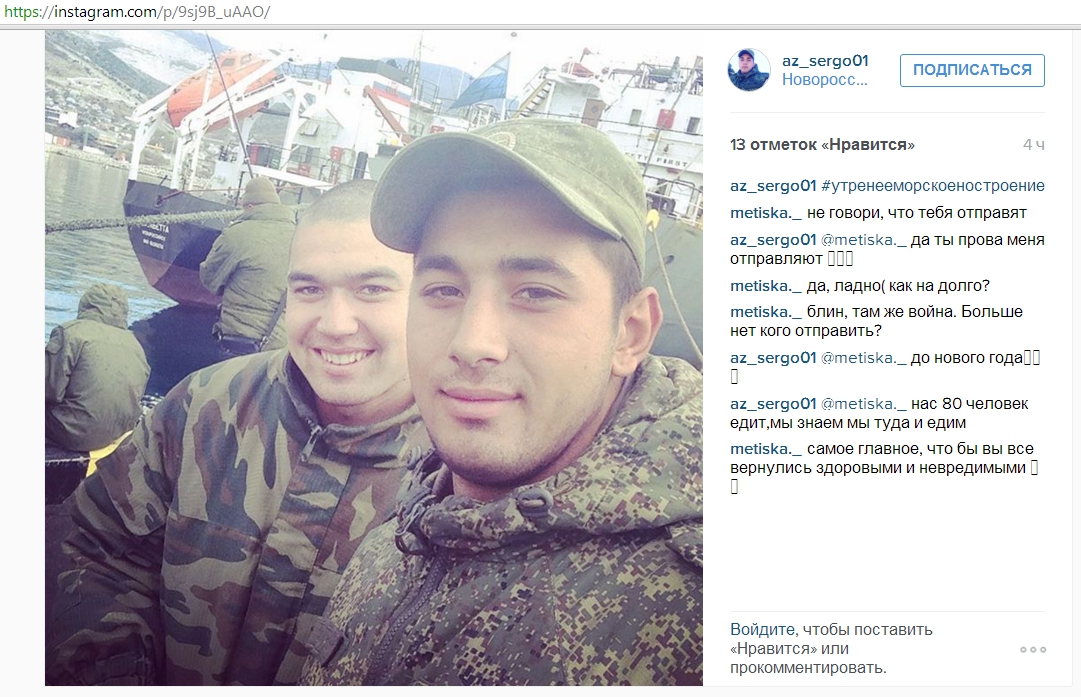 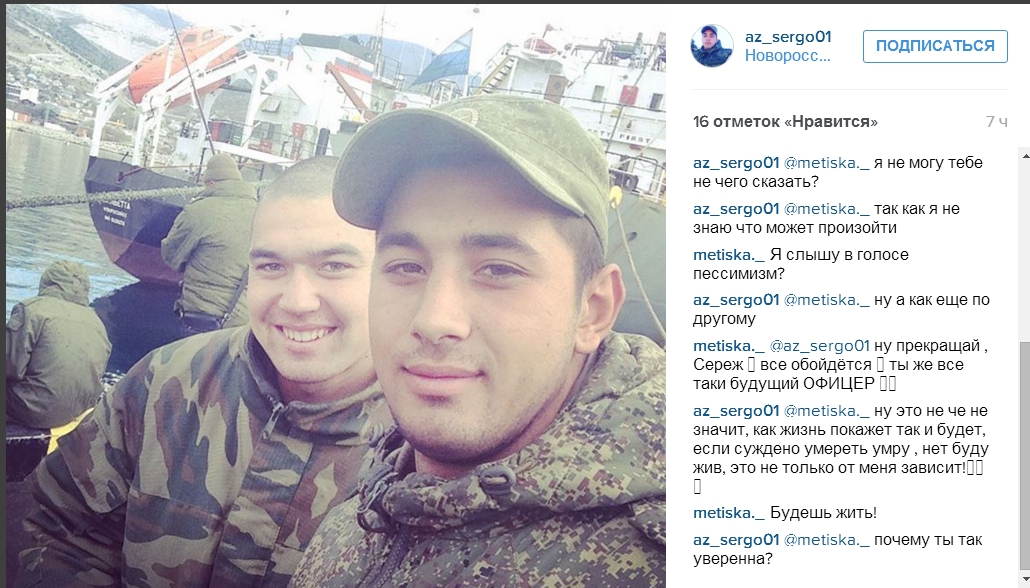 The serviceman complained to his female friend that he as well as his colleagues, a total of 80 people, are to be sent ‘to war’. He will be ‘at war’ until the New Year. He did not indicated where he was going, but it is easy to guess, as warships from Novorossiysk have been showing up in Syria over the past months [1], [2]. (Of course, there is a 5% chance that they are going to Ukraine).

The soldier is not a Marine. He is from a motorized infantry, serving in a sniper company. His old photographs very often are geo-tagged to the village of Storozhevaja in the Zelenchuksky District, Karachay-Cherkessia, Russia. It is a home base of the 34th separate motorized rifle mountain brigade, military unit No. 01485.

The badge on his sleeve in one of Sergei’s photo’s confirms it: 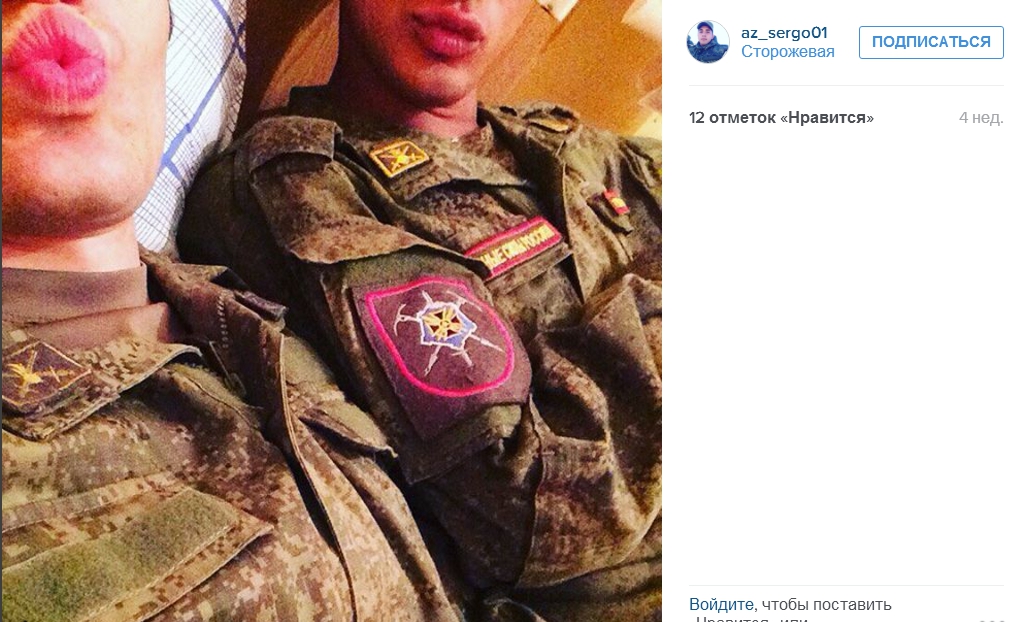 You can verify that this insignia is of the 34th Brigade, for example, here.

Below we cite a dialogue without editing. It’s funny, but Russian soldiers very often cannot write even basic Russian words without making mistakes.

… The girl at the time of writing did not answer why she believed that Sergei would live … It is worth mentioning the words “you’re still a future OFFICER”. Is it true that after a forced deployment an officer rank is awarded or does Sergei plan to graduate from higher military educational institution?

Aft of the tanker ‘JULIET’ was visible in Sergei’s photo on Instagram. It allowed us to track the movement of the ship and its mooring place. That, in turn, helped to determine the place where the photo was taken: Cape Sheskharis, Novorossiysk. 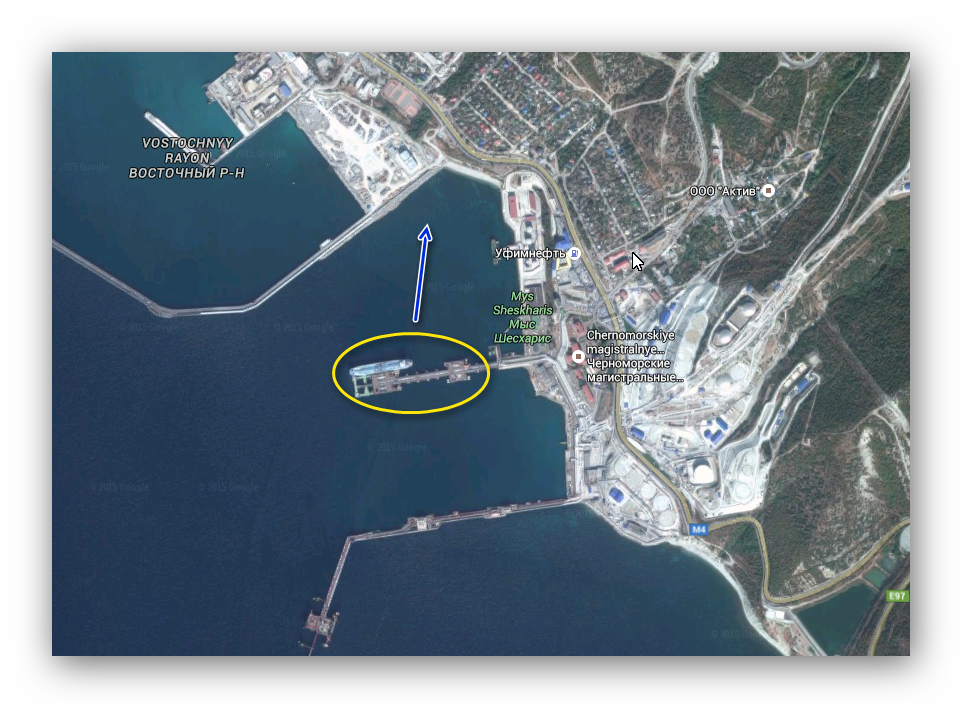 Interestingly, blogs of insurgents fighting against the regime of Bashar Al-Assad are continually updated with pictures and videos of captured items clearly of Russian origin and perhaps even belonging to Russian soldiers.

For example, here are recent trophies – a photo posted by the Facebook group Syria – Revolution of the Blessed Shama. In the photo we see new Russian helmets, the same as those that were worn by the ‘green men’ in Crimea. 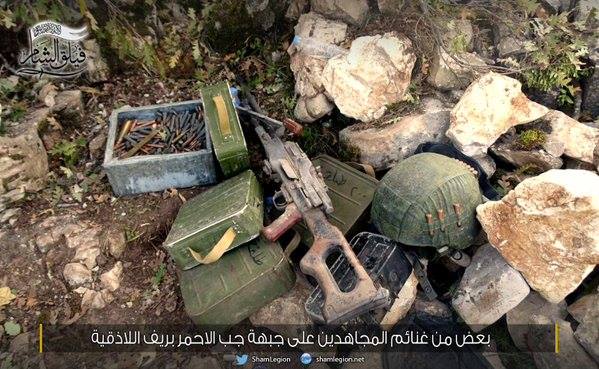 Below are links to archives of all photos and comments for review:

For full or partial use of the article, a direct link to the article on the site InformNapalm.org is mandatory.

11 Responses to “What War are Soldiers from the 34th Brigade of the Russian Army Going to?”