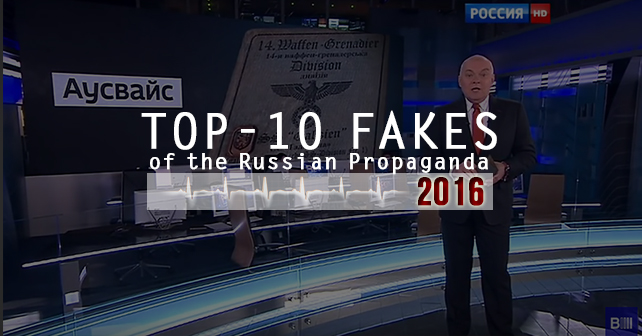 In this review we collected the top 10 bogus stories of the Russian propaganda which appeared in 2016. The full list is, of course, not limited to ten. We could have easily done top 100 and more, but it is beyond the scope of this digest.

On its third year of the war against Ukraine, Russia continues to spend billions of dollars a year on propaganda, with a special role played by the production of false news or fakes. Considering that Ukrainians have long ceased to buy the tales and jiggery-pokery of Russian propagandists, their main target is the domestic consumer, i.e. the Russians. Fakes help Russian propaganda to maintain a level of hatred towards Ukraine, feed the pseudo-national idea and mobilization mood in the society, promote the perverted values of the “Russian world” and uphold the perception of “decaying West”. Outright idiocy can cease to work only with the revival of overall critical thinking ability of the Russian people, when most will again be able to take the information from the media with a grain of salt.

As a small contribution towards this goal, we compiled the list of the most prominent Russian fakes from 2016:

To emphasize the cruelty of Ukrainian “punishers”, Russian propagandists posted a staged video on social networks, where men in uniform wearing balaclavas, allegedly the Ukrainian military men, cast a man into a pit, and then cover him with earth. For greater realism, the Ukrainian speech sounds in the movie: “Not yet dead… hold”. And the merciless Ukies put up a sign reading “Separatist” as a tombstone. It’s amazing that the crucified boy (the most famous fake of the Russian propaganda) did not feature here. The fake video was gleefully spread by Zvezda, the official channel of the Russian Ministry of Defense, and  REN-TV.

Russian propaganda spread the word that Till Lindemann, the lead singer of Rammstein was an ardent fan of Vladimir Putin. 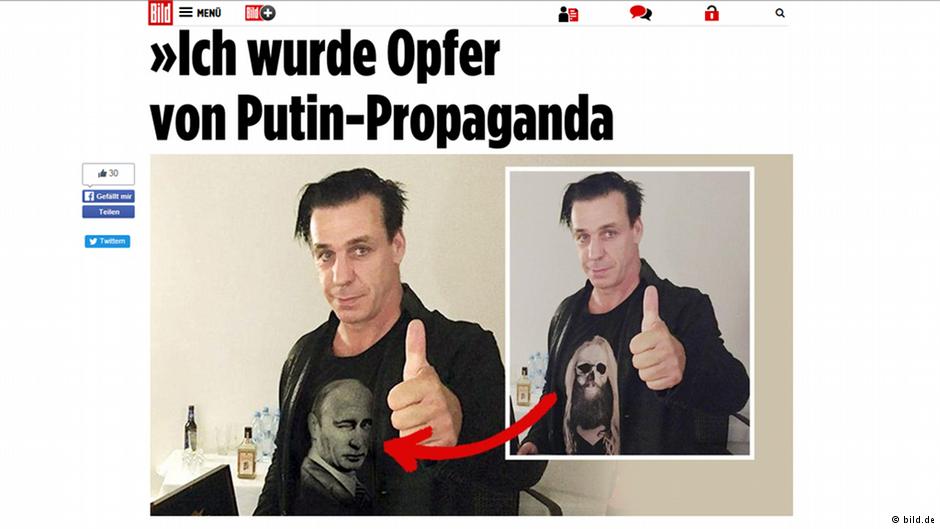 And that made Till put on a t-shirt with a portrait of Putin. In realityy, there was a skull on Till’s tee. Komsomolskaya Pravda newspaper went the furthest, publishing a fake photo in the article titled Rammstein lead singer: not even Angela Merkel can boast of such popularity as Vladimir Putin. Till’s quote was invented from the first to the last word – the singer said that he had said nothing of that kind.

The story made old buddy Till so angry, that the ensuing publication in Bild was titled: I became a victim of Putin’s propaganda.

3) The propagandists of Russia-1 TV channel presented a girl in the courtroom, where the interrogation of Viktor Yanukovych took place, as the Deputy Interior Minister Anastasia Deeva.

Propagandists can throw in fakes for no particular reason, just for the hell of it. Spot a random girl in a video wearing similar glasses to Anastasia Deeva’s (the glasses alone are enough, no need for more similarities – “the plebs will lap it up” anyway) and voila! – another reason to talk about private nude photos of the fruity Ukrainian deputy minister.

“A lively discussion on the deputy of Avakov appearing in the courtroom. During the broadcast this blonde in a blouse gets in the frame. And Anastasia Deeva, being in a blouse, is very remarkable in itself. Internet knows Deeva in another guise. This is the same Deeva, who is responsible for European integration at Avakov’s administration, a very fitting field! And her whole appearance shows affinity to free Europe“, – the propagandist commented.

4) Russian aircraft carrier group presented with the photographs of the US Navy. 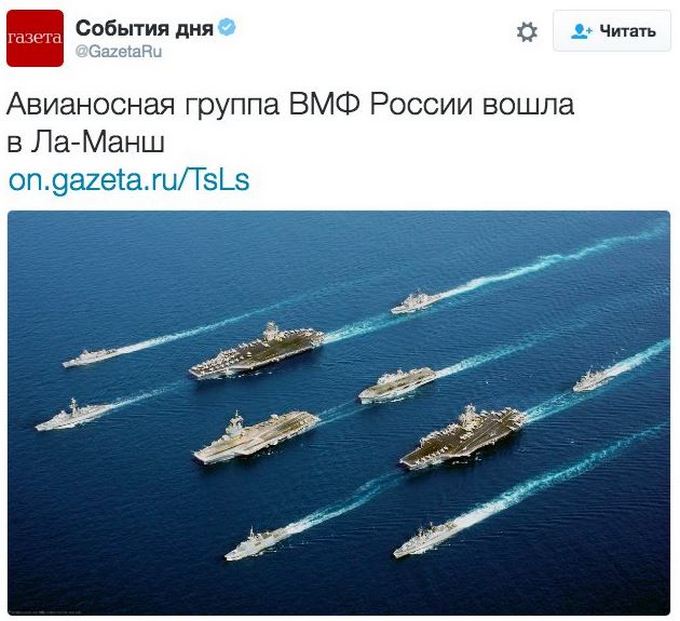 Russian media resorted to manipulating images, trying to add strength to the country’s fleet. Thus, instead of a group of ships of the Russian Navy, led by the puffing Admiral Kuznetsov carrier entering the English Channel, Russian media showed photos of a US Navy aircraft carrier group. This funny fake was ridiculed on social networks giving some additional tragicomic element to smoking of the Russian fleet.

5) FSB in Crimea presented airsoft weapons as combat assault rifles for the sake of trumped-up charges. 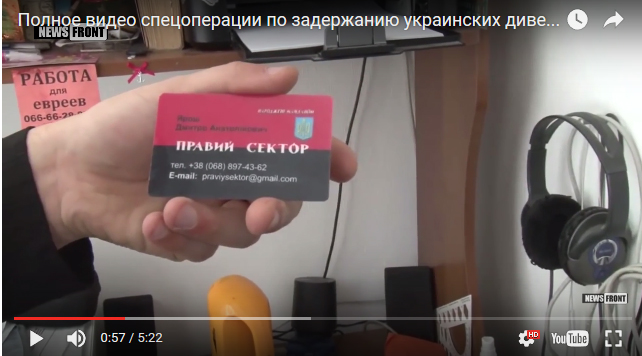 The Russian Security Service (FSB) with the support of the media also actively uses fakes. ТSo, in November 2016 InformNapalm promptly exposed a fake in an operational video of FSB, where security officers in the occupied Crimea presented airsoft weapons as combat ones, for to bring trumped-up charges and detain Ukrainian political experts for alleged illegal possession.

The fake contained some really lame details – a pair of packets with inscription “Перець червоний” (”Chilly Pepper” in Ukrainian), so that even the most simpleminded Russian viewers would put two and two together and figure out that the “spies-terrorists” are from Ukraine. And of course, the story could not do without the big guns like “the Yarosh card”.

Here is the video which was spread on the Russian channels. However, Berlin police made a clear statement: “According to the findings of the investigation there was no kidnapping or rape.” It’s good that the propagandists did not crucify the girl in the story. The imaginary boy from Slovyansk, as we remember, was less fortunate. 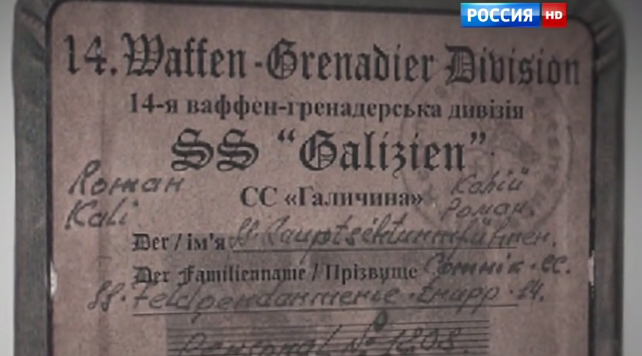 Dmitry Kiselev does not have a single program, in which he would not have lied brazenly and cynically. But the newscast where he holds the allegedly WW2 “Ausweis”, turned out especially crude. The document, which Kiselev shows, contains a picture of a different man from the one he mentions, the text on the ID is written in modern Times New Roman font, there are grammar errors in the German language indicative of Google Translate use. And the icing on the cake is the bogus quote of Hitler.

8) The story about “poor European Union” and the need for cooperation with Russia on the basis of manipulated interviews of French people.

Franch Canal+ spared neither time nor effort to scrutinize the whole story of Russia 24 channel about the Eurosceptics in France and found everyone who was interviewed by the Russian propagandists. It turned out that they had not just mistranslated the words of the French, but consciously attributed to these people things they did not say at all.

9) Roman Sushchenko, the journalist of Ukrinform a “spy and saboteur.”

There are articles on the web, which were written by this journalist working in France. Some of them are strongly critical of Putin and the pseudo-republics in the east of Ukraine. КWhen the journalist arrived at Moscow to visit some relatives,  he was promptly snatched by the FSB. No one offered any evidence that Roman Sushchenko collected intelligence on the Russian Army or spied out any state secrets. Roman became another hostage of Putin’ s regime, grabbed just in case for a possible exchange and have an extra bargaining chip.

10) Russian observers not to be allowed at the US elections

Izvestia newspaper published a manipulative report titled Russian observers will not be allowed to monitor the US elections. This article was picked up by other Russian media such as Russia Today – United States bars Russian monitors from presidential polls – elections commission. Taking the fake much further, the Russian Foreign Ministry spokesman comments on this pseudo breaking news, giving it maximum possible legitimacy. In fact, the Russian observers were not allowed in only three states, and two of them did not allow foreign observers from any country to be present at the elections.

This is just the tip of the iceberg of lies which is the basis of the  Russian media work. Ukrainians have developed immunity to this kind of “reporting”, but RT and the likes still seem to find a lot of gullible minds around the world. Maybe it is not worth time and effort debunking every propagada myth the Russian media throw at the world. But it is always good to make a bit of fun of the lame stories they invent.

To fight with the Russian propaganda, using the same methods, throwing money at counter-propaganda, is useless. The response of Ukraine must be in another plane: real military victories, tangible improvement in living standards, real reforms of the state, real changes in Ukrainian culture, etc.

No Responses to “Top 10 fakes of Russian propaganda in 2016”