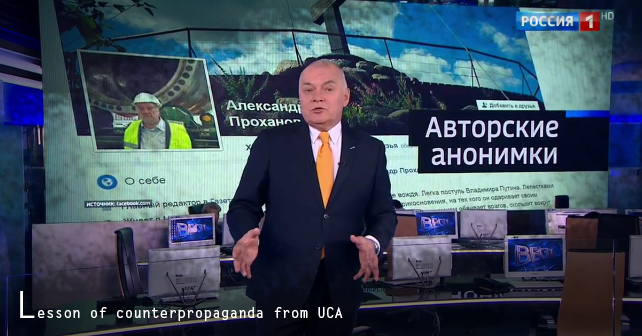 On March 31, Ukrainian Cyber Alliance (UCA) executed a pinpoint operation that was breaking Russian media. On April 2 the wave reached as far as Vesti Nedeli show with Russia’s top TV anchor Dmitry Kiselev. That’s an example of how a “revolutionary” Facebook post on the page of a famous Russian politician, writer and propagandist can start a chain reaction, sparking panic among central TV channels. The Kremlin is afraid of the Russian riot, which is known to be “mindless and ruthless”. And now it has become particularly conspicuous.

The next day the information about hacking Prokhanov’s pages became one of the most popular topics on the Russian media.

It’s time to somewhat lift the veil and name the heroes who carried out this operation. Russian media called them “unknown” or “refined liberals”, so as not to attract attention to other operations of Ukrainian hacktivists.

In late March, UCA volunteers got access to the Facebook and Twitter pages of Alexander Prokhanov and wrote some “unorthodox” content in his name.  To get an overview of his work, one can just look through the titles of his books:  “Novorossia Weeping Blood”, “Chechen Blues”, “The Last Soldier of the Empire”, “The Syrian Armageddon”, etc.

Only one post being still  available (archive) at the time of this publication had a stunning effect. Therewith, Prokhanov’s writing style had been copied exactly. The author himself, in an interview to Russian media, found this to be a very complicated task. He believes that his writing style is unique, “rife with metaphors and epithets; it has a vibrant emotional coloring and distinction”. However, Wolfgang Kasack, a German Slavic studies scholar, calls Prokhanov’s works “of banal, sugary personal style based on shameless lies, and saturated with cheap adorning epithets”.

For that matter, a UCA speaker,  Sean Townsend, commenting on the Prokhanov’s interview, said that it took him no more than 15 minutes to copy the style of the “Russian publicist”. He reported about it in his post, quoting the interview with Prokhanov:

“…Today in the evening they hacked it (Ed.: the Facebook page) and posted a monstrous text imitating my style. I thought this action disgusting”, Alexander Prokhanov told TASS Russian News Agency. Then, apparently, the victim looked at the number of likes and reposts, and gave his comments to Komsomolskaya Pravda radio: “… I know Kiev bloggers — they are pretty simple, not really refined guys having rough vocabulary and rude techniques; while here the text mimicking me itself is made by a refined hand, that is, only a person of philological culture could have created this text, a person who permanently keeps on top of my works, my novels.“

“Well, that hurt. On behalf of the  ̶U̶k̶r̶a̶i̶n̶i̶a̶n̶ ̶Philological C̶u̶l̶t̶u̶r̶e̶ ̶C̶e̶n̶t̶e̶r̶  Ukrainian Cyber Alliance, I can state that the source of my inspiration was the article titled Stalin’s Eleventh Blow (five minutes of cursory reading, and ten more minutes to proofread). I have to admit that I do not like modern Russian literature. But I like the countercultural trash, and I will only agree to read one of Prokhanov’s novels on the ruins of the Kremlin. Such a setting will lend them depth and historical irony”, Sean stressed.

Also, UCA injected some truth serum into the Prokhanov’s pages, posting a link to an important investigation of InformNapalm: The Hague is waiting for the tankmen of the 136th Brigade of the Russian army: lists, documents, orders, OSINT + HUMINT.

As long as the Russians pay no mind to acute domestic problems, and do not notice the war crimes carried out by the Russian Army and Russian security agencies in Ukraine, Syria and other countries, as long as they uncritically consume whatever they are fed down by the federal TV channels, the Kremlin will continue to hold the masses under a spell and foment military hysteria.  In the domestic media field, the Russian Federation is painting itself a victim, as though the whole world has turned against it.  At the same time, the context of such aggressive and criminal actions by Russia as the invasion of Ukraine, annexation of Crimea, war in Donbas, bombing of civilians in Syria, coup attempts and political subversion in Europe is deliberately hushed.

Ukraine found itself at the forefront of defense in this war hybrid, with the government only whining about the shortage of funds to match the enormous budgets of the Russian TV and effectively counter the Kremlin propaganda.

The pinpoint operations of the UCA volunteers have effectively checked the aggressor, without spending a penny from the state budget. Apparently, the West would rather spend millions on round tables devoted to counterpropaganda, but the real and effective stand against the aggression lies in actual response measures. They may study the impact of the KVN (Ed.: a comic contest and TV show) on the Russians as long as they like, but if the Russians do not receive any information shakeups for their skewed worldview, the war will continue.

It bears reminding that the volunteers of the InformNapalm international community made a video about the achievements of the hacktivists of the Ukrainian Cyber Alliance in their struggle against the Russian aggression and propaganda. The film clearly demonstrates that the pinpoint injections of the truth serum pose a serious threat for the Kremlin and could change the course of information and actual warfare.

This is an example of how active Ukrainians, not waiting for the state and the security services to protect them from Russian aggression, join efforts, take the initiative and step by step bring victory.

This publication was prepared by Andrew Lysytskiy specially for InformNapalm. Translated by Victoria Batarchuk, edited by Artem Velichko

We call on our readers to actively share our publications on social networks. Broad public awareness of these investigations is a major factor in the information and actual warfare.
For notifications about InformNapalm investigations follow us on  Facebook and Twitter.