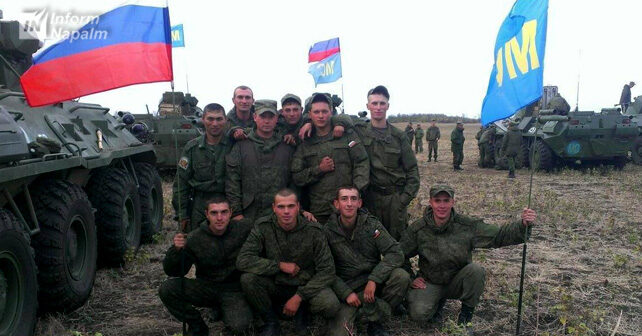 InformNapalm volunteer intelligence community collected facts of the direct participation of servicemen of the 15th Motorized Rifle Brigade (MRB) of the Armed Forces of the Russian Federation in the aggression against Ukraine. On the basis of 14 of InformNapalm’s own OSINT investigations, a number of additional evidence-grade photographs, and data from other sources, we managed to identify 40 Russian servicemen performing covert combat missions in Ukraine. These data confirm that, from 2014 on, the 15th MRB of the Russian Army has been involved in hostilities against Ukraine, mainly in the Luhansk Oblast, it also participated in the operation to seize and occupy Crimea. It is known that the 15th MRB also participated in the aggression against Georgia in 2008.

15th Separate Motorized Rifle Brigade (15th MRB, military unit 90600, stationed in Roshchinskiy town, Samara Oblast, Russia). This is the only brigade in the Russian Armed Forces that has the status of “peacekeeping” and is part of the UN international peacekeeping forces. It is manned only by contract servicemen, who must be proficient in English or French, have a category B driver’s license, and after completing training at the peacekeeping center in Moscow, they pass exams administered by the relevant UN commission.

From November 10, 2020, units of the 15th MRB were reedeployed to Nagorno-Karabakh as part of a peacekeeping operation. Since then, the brigade’s personnel have formed the core of the Russian contingent in Nagorno-Karabakh.

Data of 37 servicemen of the 15th MRB who participated in the aggression against Ukraine. (Based on InformNapalm OSINT investigations) 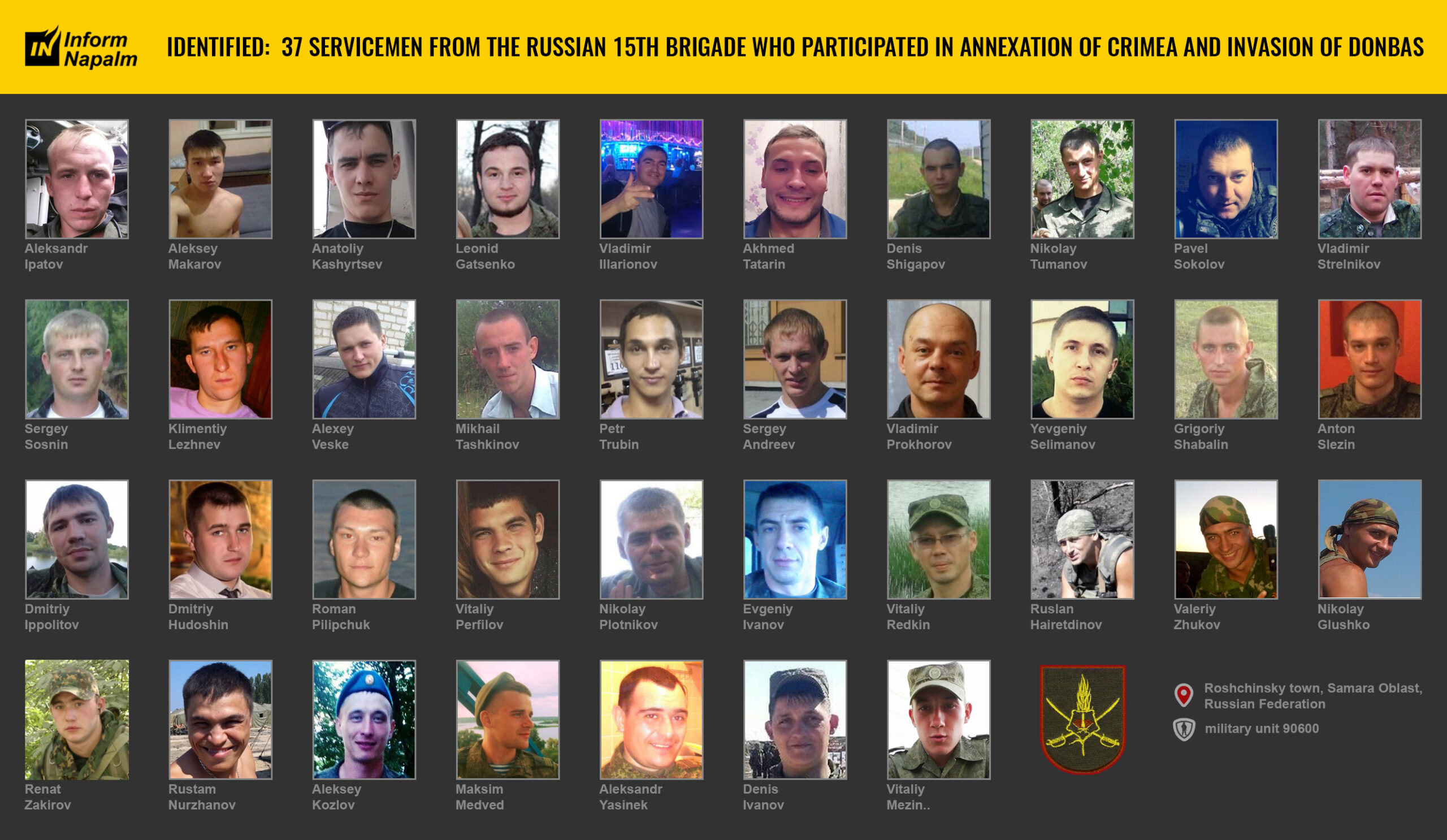 In order not to overload this feature with a large number of screenshots and archives, here are some selected facts about some of the individuals from these infographics. As for the other involved individuals, all the collected evidence is presented under the first link to the OSINT investigations in the InformNapalm database.

Nikolay Plotnikov, in December 2014 he posted his photo with a geolocation tag in the Luhansk Oblast of Ukraine. He features there holding a Vintorez VSS sniper rifle for silent shooting which is issued to the special operations forces of the Russian Federation.

He also has photos showing his awards from the Russian Ministry of Defense in his album: a medal For the Return of Crimea and a medal For Military Distinction. Plotnikov was also identified in a group photo of the 15th MRB servicemen. 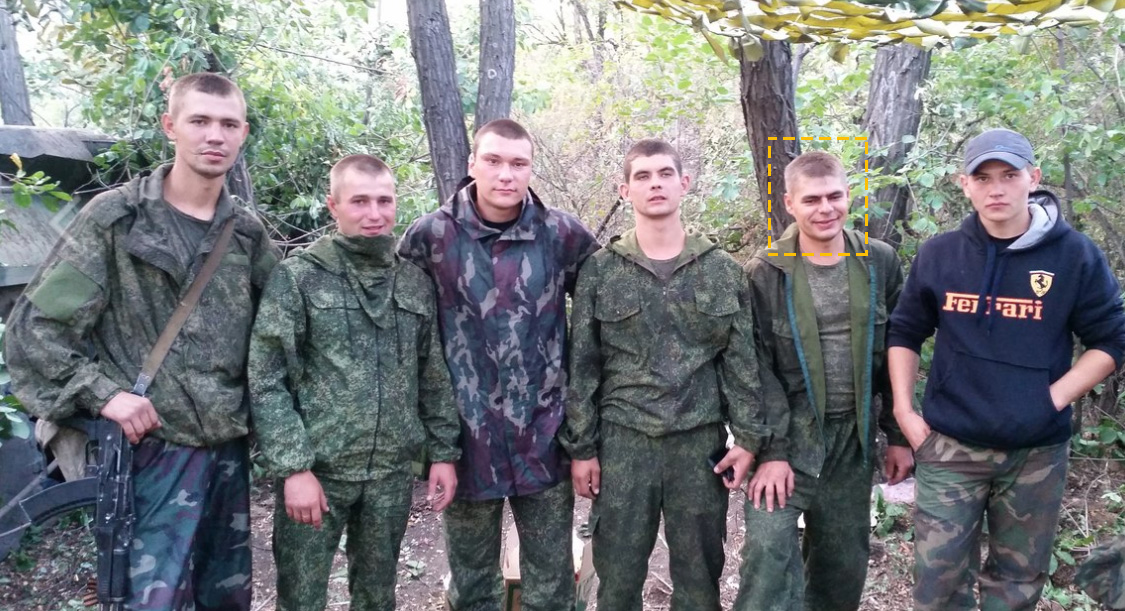 Also in December 2014, he posted a video titled “How I spent the summer of 2014” on his social media page. The video lasting 1:51 minutes shows the convoy of armored personnel carriers (APCs) of the 15th MRB on the march in the war zone in the east of Ukraine. The video shows destroyed buildings, burned vehicles and scorched fields. Based on the video analysis, InformNapalm volunteers established the location, which is the town of Novosvitlivka in Luhansk Oblast, Ukraine. At the beginning, the video shows the destroyed local community center in the direction of movement from Luhansk towards Sorokyno (formerly Krasnodon). Plotnikov himself was recognized in the same video.

In 2014, Renat Zakirov actively posted on social media photos of his deceased colleagues who were killed in action in the Donbas.

Ruslan Khairetdinov distinguished himself by the fact that in September 2014 he actively photographed and posted Ukrainian hryvnias in his album, and also got into a joint photo with a torn down sign saying “State border of Ukraine. Entry, passage prohibited.” 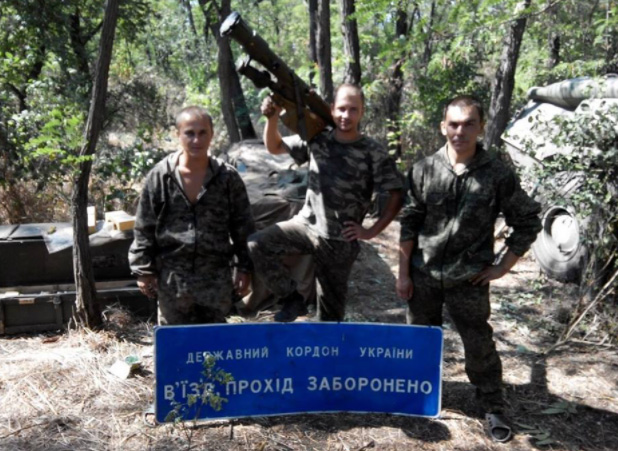 Anton Slezin, junior sergeant, he posted joint photos with other servicemen of the 15th MRB from the combat zone in the Donbas. Our particular attention was drawn to a photo featuring military equipment with the tactical sign of the brigade painted over with the inscription “LPR”. Also among his photos, Slezin posted his awards: medal For the Return of Crimea and a medal For Military Valor, II degree with an award certificate (order of the Ministry of Defense of the Russian Federation No. 178 of March 24, 2015). 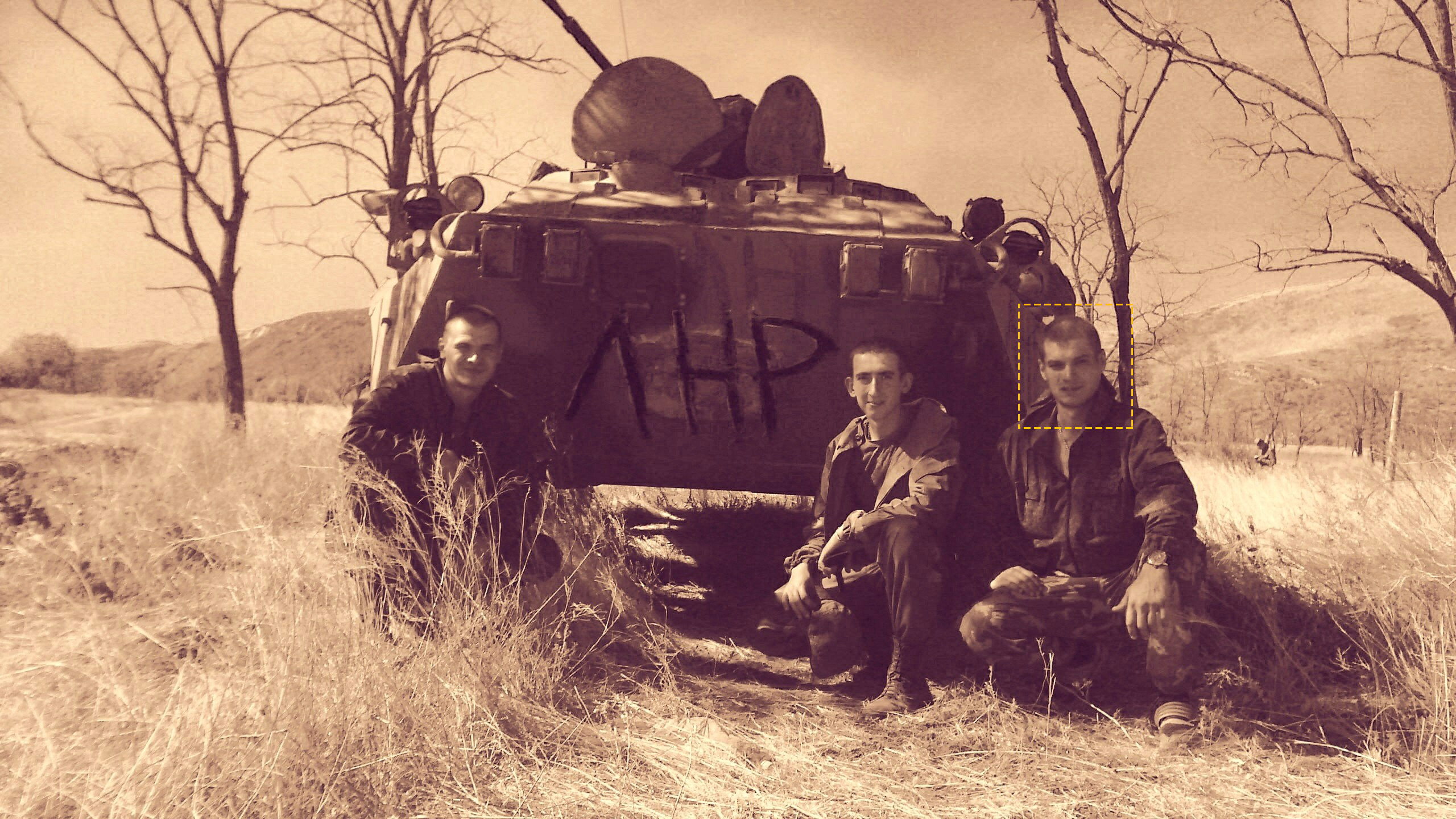 Rustam Nurzhanov posted photos on both sides of the Russian-Ukrainian border in 2014: in the base camp of the Russian Army in the Kamensky Raion, Rostov Oblast of Russia, and later in the city of Sorokyno (formerly Krasnodon), already in the Luhansk Oblast of Ukraine. 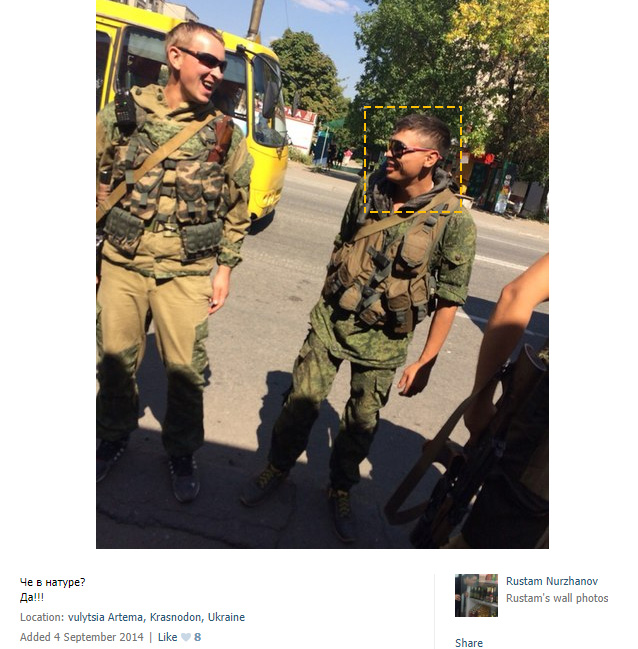 Anatoly Kashirtsev, a sergeant of the 15th MRB, posted a selfie taken in front of a road sign for the village of Luhanske, Ukraine.

Alexey Kozlov who served as a squad commander in the 15th MRB, posted photos in his social media account, both in the base camp of Russian troops in the Kamensky Raion of the Rostov Oblast, and in the combat zone already in Ukraine. Read more about him in the InformNapalm investigation: Russian squad sergeant Kozlov spotted in Ukraine.

Additional data on individuals who were not included in the infographics

OSINT investigator @Askai posted on Twitter additional information about some servicemen of the 15th MRB, who do not appear on the infographics and in InformNapalm’s OSINT investigations, but who were also spotted in the Luhansk Oblast:

Rais Rakhmaev is seen on the photo which was taken in September 2014 in the village of Khryaschuvate, Luhansk Oblast, Ukraine. The photo shows a Russian soldier next to the mercenaries of the Luhansk People’s Republic (LPR) terrorist organization. Apparently soldiers of the 15th MRB gave them to hold 2 special forces-issue silent sniper rifles Vintorez VSS. 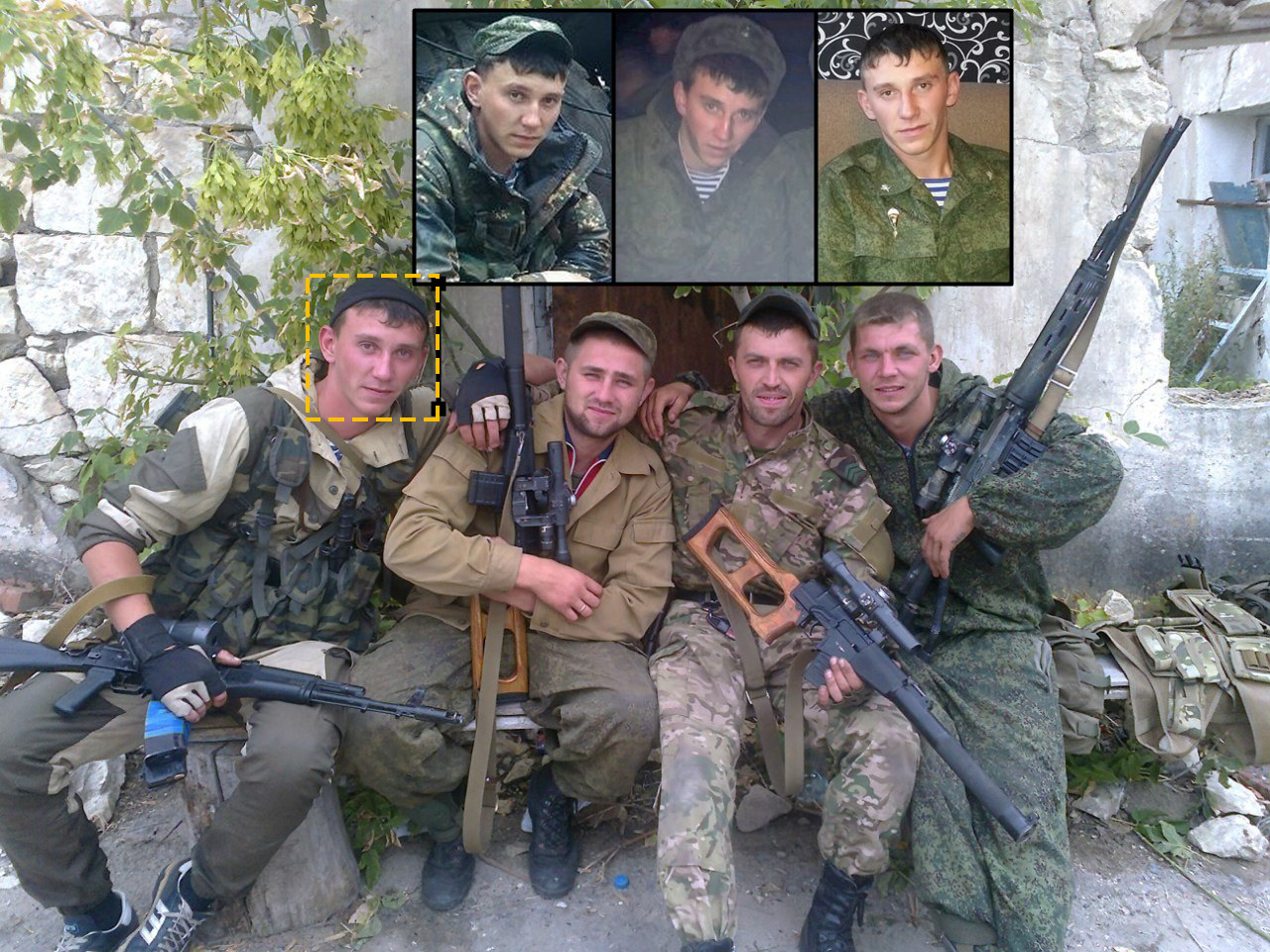 Timofey Naimushin, along with other servicemen of the 15th MRB, was caught in a series of photos taken near the village council in Izvaryne, Luhansk Oblast, Ukraine.

Rustam Faizullin was photographed by The Guardian reporter in September 2014, standing next to a BTR-70M in Lutuhyne, Luhansk Oblast, Ukraine. And already in December 2014 he was awarded the Medal for Courage. 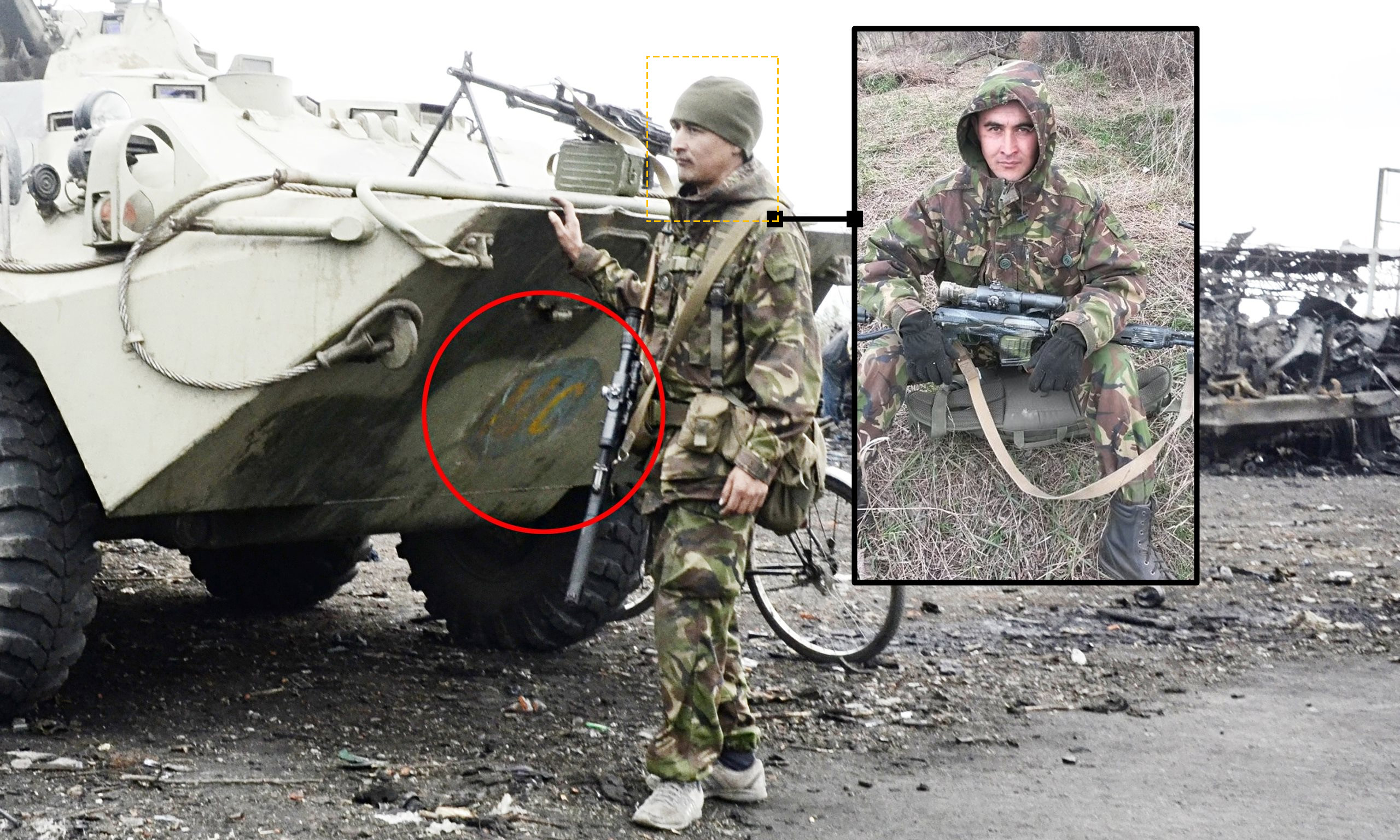 An investigation by InformNapalm iwhich explains why the commanders of the 15th MRB were ready to carry out the criminal orders of the Kremlin is worth some special attention.

Colonel Vitaliy Gerasimov was in command of the 15th MRB from October 2013 to October 2014, during the period of active participation of this military unit in the operation to seize Crimea and in the hostilities in the east of Ukraine.

Most of the award certificates for medals issued to servicemen of the 15th MRB for participation in hostilities in the Donbas on the basis of orders of the Minister of Defense of the Russian Federation Sergei Shoigu from 2014 and 2015, are signed by Colonel Nikolai Zakharov who was in command of the 15th MRB from October 2014 to 2016.

Since 2020, the 15th MRB is under command of Lieutenant Colonel Pavel Ershov.

This publication showcases the data of 40 Russian servicemen (37 of them on InformNapalm infographics + 3 from other sources) of the 15th Motorized Rifle Brigade of the Russian Army who participated in the aggression against Ukraine. These data are not exhaustive, as there are still many joint photos with other servicemen of this brigade in the combat zone in the Donbas, who have not been properly identified. However these materials are sufficient to raise a matter at a high international level of excluding this brigade from the UN international peacekeeping forces. The published evidence contains a sufficiently large facts base and a list of individuals who can be prosecuted as war criminals and/or involved as witnesses to the war crimes of the Russian Federation against Ukraine.

Text by Roman Burko, infographics by Alex Aleksidze, translated by Artem Velichko. Distribution and reprint with reference to the source is welcome! InformNapalm materials are available under a public license Creative Commons Attribution, CC BY. The condition for using our materials is a hyperlink to the original source in the first or second paragraph of your publication. InformNapalm social media pages:

No Responses to “Exposed: 40 Russian military men of 15th Brigade participated in the aggression against Ukraine (Infographics)”