Analysis of the OSCE SMM reports in Donbas for August: intelligence shows preparations for escalation

Volunteers of the InformNapalm volunteer intelligence community continue to collect data on the operational situation in Donbas, conduct OSINT monitoring of social networks and document numerous proofs of the Russian military personnel and mercenaries participating in the Russian war against Ukraine.

Reports of the OSCE Special Monitoring Mission (SMM) in Ukraine are among the most important official sources for analyzing and comparing information. They can be compared with public statements by the Office of the President or with the data from the press service of the Joint Forces Operation (JFO) in Donbas (as we did last year during the previous “ceasefire”). Of course, many questions remain about the OSCE SMM reports, given that there is a stable large number of Russians, as well as citizens of the countries loyal to Russia among the observers of the Mission in Ukraine, which allows the aggressor country to influence the monitoring data. However, so far there is no alternative and there are no other official monitoring organizations to collect data, therefore we have to use this source of information, albeit with a pinch of salt. It is also worth remembering that very often the OSCE international observers themselves become the object of information operations of Russia and their movement in the territory controlled by the Russian occupation forces (1st and 2nd Army Corps of the Russian Armed Forces) are restricted in every possible way. And when visual contact is limited (observation cameras are turned off or disabled, and monitoring UAVs jammed by Russian electronic warfare equipment) observers often have to fully rely on sound information about explosions or small arms fire. This method has material flaws. In the absence of visual contact, the Russian troops also actively use technical assets for deception, for example, the ZS-82 sound broadcasting stations, able to simulate explosions and other sounds that can distort the real situation.

During this period, Ukraine celebrated National Flag Day (August 23), Independence Day (August 24) and honored the memory of the fallen servicemen on Remembrance Day (August 29). The purpose of the monitoring was to analyze the key points of the reports, to identify meaningful intelligence indicators for the real current situation in the combat zone.

“Following agreement reached at the meeting of the Trilateral Contact Group on 22 July regarding additional measures to strengthen the ceasefire, from 00:01 on 27 July until the end of the reporting period, the SMM has so far recorded a total of 893 ceasefire violations, both in Donetsk and Luhansk regions (including 149 explosions, two projectiles in flight, 13 illumination flares and 729 bursts and shots)” – OSCE.

The situation in the areas of disengagement of forces and assets

“The SMM continued to monitor the security situation in and around the three pilot disengagement areas. Meanwhile, the Mission constantly recorded the presence of people in former military and military-type positions, as well as near them within the disengagement areas in the Zolote and Petrivske areas, ” – OSCE.

Let us dwell on each of the areas for the disengagement of forces and assets in more detail:

The SMM observed members of the illegal armed formations (wearing armbands with “JCCC” written on them) every day at the southern end of the new bridge span near Stanytsia Luhanska. Only one small arms shot was recorded on the evening of 24 August.

However, residents of Stanytsia Luhanska regularly write on social media about the violation of the “ceasefire regime” by the Russian occupation forces. For example, the well-known volunteer Sveta Svetikova repeatedly wrote about violations on August 27 at 21:23 and on August 30 at 6:07 and 6:40 am .

We also noticed that the OSCE SMM in its reports continues to manipulate sensitive information about the violation of the agreements on the withdrawal of weapons. We wrote about this in January 2020 and we see the same pattern again in the report for September 1, 2020 №208/2020.

It is worth reminding that according to the Minsk protocols, tanks, artillery, MLRS, tactical missiles are subject to withdrawal, whereas anti-aircraft missile systems are not regulated. Any disclosure of such irrelevant data contradicts the principles of neutrality and impartiality, which should guide the OSCE SMM in providing sensitive defense information.

Every day the SMM see members of the illegal armed formations (wearing armbands with “JCCC” written on them), alone or with people in protective gear, going 350 m deep into the disengagement area near the T1316 road.

“On the same day, outside of the disengagement area, about 100m south of its southern edge, the Mission saw 15 workers with three excavators and a truck with a trailer conducting groundworks across and along road T-1316.” – OSCE.

It should be noted that they work non-stop.

That is, the occupying forces continue to use the “ceasefire” to expand their strongholds and strengthen their offensive capabilities.

While monitoring the disengagement near Petrivske village, members of the Mission’s patrols normally note a calm situation there. However, long-range SMM UAVs spot from 1 to 6 people manning the former position of the illegal armed formations every night.

“On 30 August, inside the disengagement area near Petrivske (non-governmentcontrolled, 41km south of Donetsk), an SMM mini-UAV spotted construction materials with wooden logs and sandbags piled near a position of the armed formations near the area’s south-eastern corner (not seen in imagery from 20 August 2020).”

InformNapalm draws readers’ attention to the fact that during the reporting period, the OSCE SMM cameras did not work from 20 to 24 August in Zolote and from 20 August to 1 September in Petrivske. These bits of data bring us to the conclusion that the SMM has no conclusive information about what is happening in these disengagement areas. Therefore, the situation can be only nominally called “calm”, since, for example, the process of the enemy laying landmines apparently goes unnoticed.

On August 20 The Mission saw for the first time a new mine hazard sign (30x30cm red wooden board with “Stop Mines” in Cyrillic) attached to a tree about 20m north of a road about 1.5km north-east of Raivka (non-government-controlled, 16km north-west of Luhansk).”

Read more: Ukraine at the OSCE spoke about Russian anti-personnel mines in Donbas, which are prohibited by international conventions

Restriction of freedom of movement 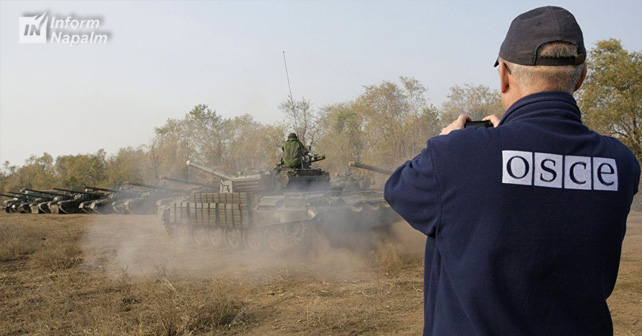 At the beginning of the article, we have already cited examples of constant obstruction of the OSCE SMM’s access to certain facilities or restriction of movement along the roads in the occupied areas of Donetsk and Luhansk Oblasts. In recent weeks, despite the “ceasefire regime”, the Mission has faced restrictions on freedom of movement in the occupied territory:

Reinforcement of the occupation forces

According to the Main Intelligence Directorate of the Ministry of Defense of Ukraine, last week, about 700 tons of fuel and 6 wagons with ammunition were delivered to formations and units of the Russian occupation forces in the occupied areas of Donetsk and Luhansk Oblasts.

In addition, Russian mercenaries who have undergone special training in the training camps of the Southern Military District in certain military specialties (snipers, scouts, signalmen), continue to arrive from the territory of the Russian Federation to reinforce the enemy units.

The Ukrainian military men of the 503rd Separate Marine Battalion also report about the rotation in the ranks of the Russian occupation forces.

“Also on the same day, while at the railway station in Voznesenivka (formerly Chervonopartyzansk, 65km south-east of Luhansk) for about ten minutes, the SMM saw between 80 and 100 stationary empty open freight wagons and a chemical/oil rail tanker.” – OSCE.

This correlates well with InformNapalm’s data for August and confirms the conclusions that Russia is using the “ceasefire” to prepare for an escalation of hostilities in Donbas. 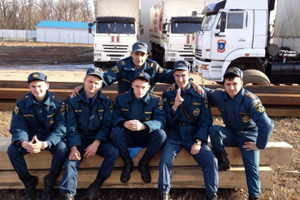 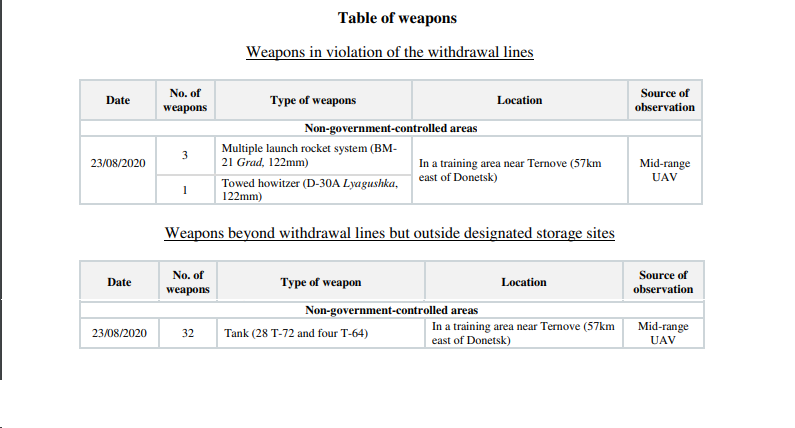 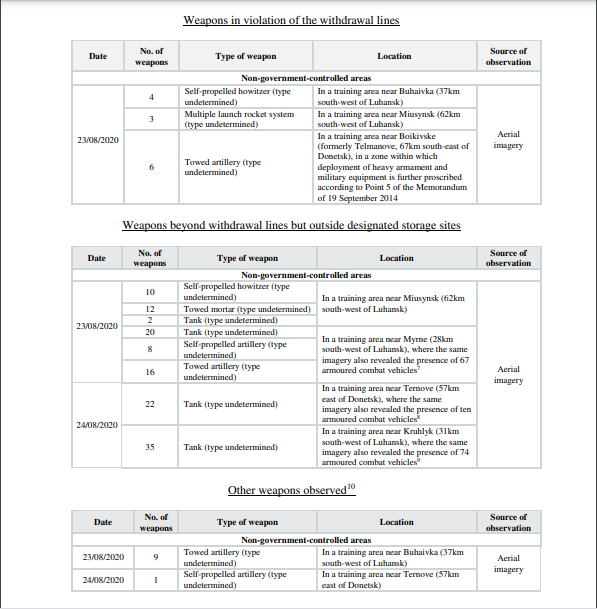 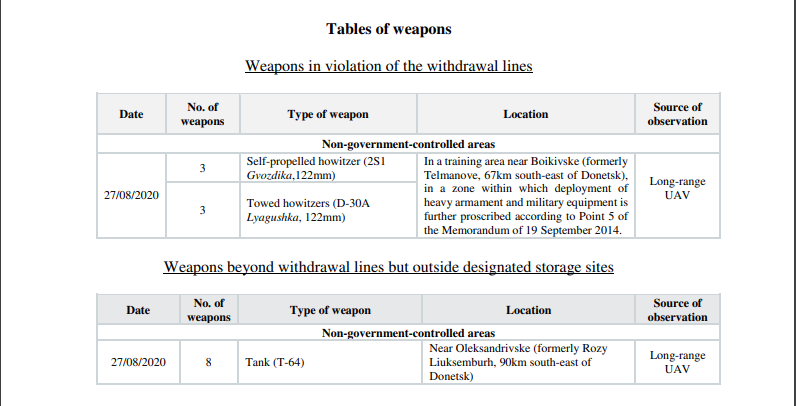 Russia continues to use the ceasefire to build up the combat capability in Donbas. Engineering work is underway, new areas of the terrain are being mined, and ammunition is constantly being replenished. Against the background of preparations for local elections in Ukraine, some politicians are trying to speculate on the topic of “achieving a consistent ceasefire regime” and “elections in  Donbas”, which in fact creates a false impression among Ukrainians about the real state of affairs in the war zone. Russia is not withdrawing its weapons and equipment, it is not withdrawing its hybrid armed formations; on the contrary, it continues to reinforce and build up its forces. Therefore, any speculation about “achieving peace” is dangerous for the national security of Ukraine.

No Responses to “Analysis of the OSCE SMM reports in Donbas for August: intelligence shows preparations for escalation”