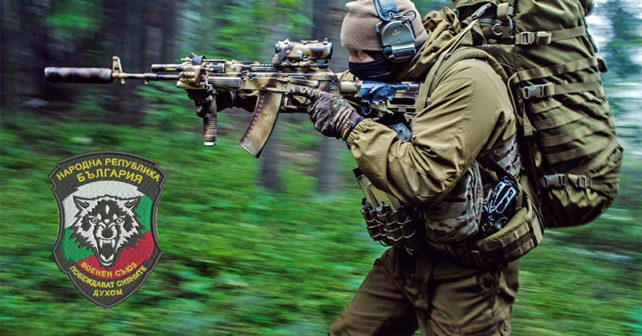 InformNapalm, an international volunteer community, continues with publications on disclosure of pro-Russian armed groups in Europe. The aim is to alert governments about their national security. If left uninspected, it will be likely that we see occupation actions and external aggression occur as in Eastern Ukraine’s Donbass. There we see examples of para-military terrorist formations like the so called ‘Army of volunteers of Novorossiya’ and the ‘Luhansk People’s Republic’ and ‘Donetsk People’s Republic’, LNR / DNR.

In this material we present an information about a pro-Russian paramilitary unification on the territory of a member of the European Union and NATO – Bulgaria. 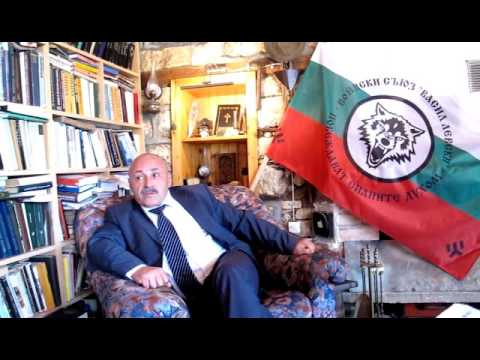 Vladimir Rusev, known as Valter Kalashnikov in the social media

In April 2016 in Varna also has been held a similar forum and has been formed a pro-Russian “Unification of Bulgaria” and a Committee for “National salvation”. 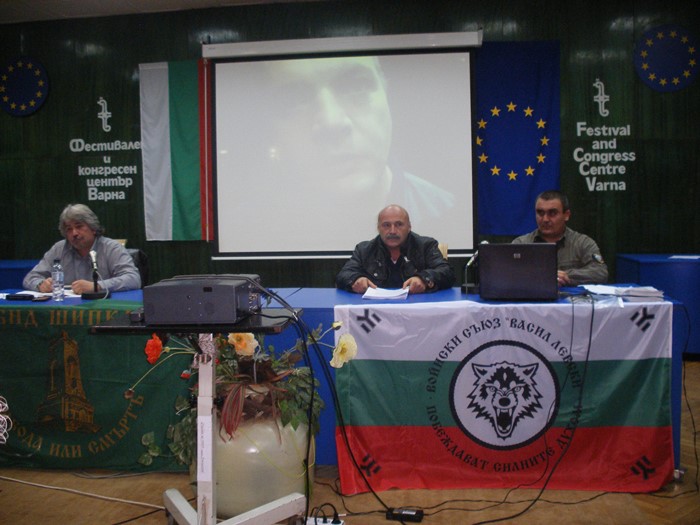 These people and organizations present themselves as independent and patriotic, against the current functioning democratic party system in Bulgaria, using the names of Bulgarian national heroes such as Vasil Levski, Hristo Botev, known Bulgarian rulers from the First and Second Bulgarian states and hiding behind national symbols are calling for eliminating the current democratic system by organizing armed rebellion. In a video message they say that they will take the power by force. Calling also for “taking the power from the people” and elimination of the existing democratic political and economic system.

Curiously, these same organizations use electronic information sources for disseminating calls for revolt and overthrow of the current Bulgarian government through an armed rebellion which InformNapalm already informed in:

In those two detailed analysis the experts of InformNapalm revealed Russian news operation in Syria. In the first part of the investigation were presented evidence on which can be made definite conclusion about staging a barrage purpose information-psychological influence on the Russian and international public. Furthermore, it was revealed the secrets about participating in this special news operation of Kremlin of the journalist Boris Anzov with Bulgarian origin, living in Moscow, graduated from the Russian University of Friendship between Peoples and working for “Media-Most LTD” – This company is owned by the media holding Gazprom Media.

Is it a coincidence that the “Military Union” Vasil Levski “and the Bulgarian militia “Shipka” use the same electronic site Bnews.bg to publish their materials just like the Bulgarian “journalist” Boris Anzov ?! 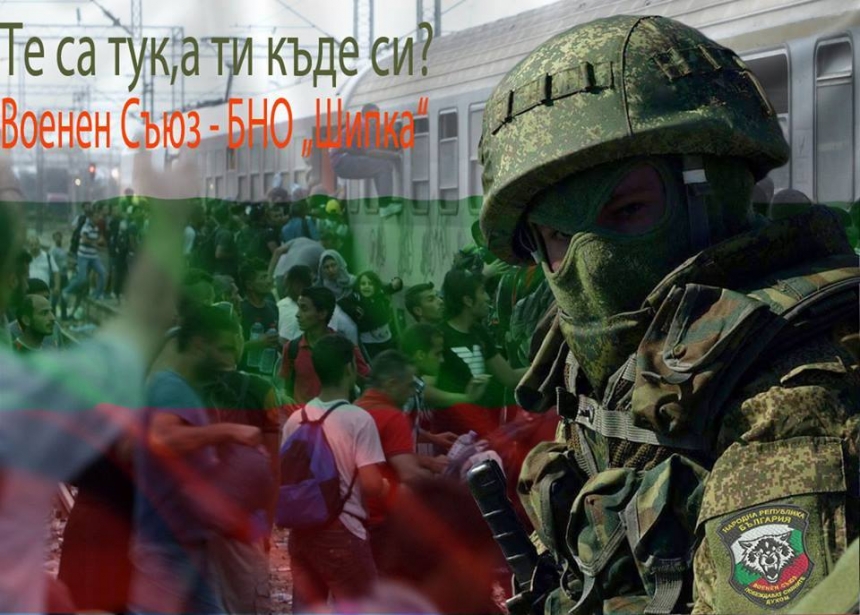 That media Bnews.bg portal on March 26th, 2016 published that the “Military Union Shipka” are recruiting candidates for a division for special military operations  – their purpose will be to assist to the Ministry of Interior of Bulgaria (?!!) and the army in a possible expansion adjacent of Bulgaria and an invasion of the “Islamic State” – which is identical just like was the mask of Russia, who entered into Syria under the pretext that they are fighting against ISIS, but the facts show that this is not true. 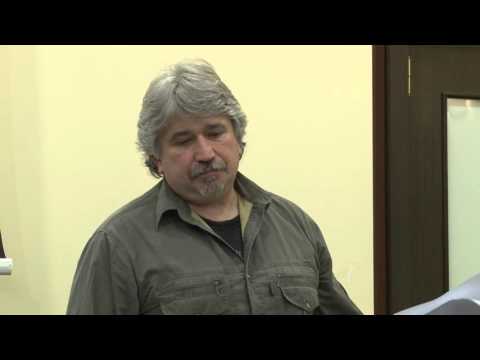 According to the organizing secretary Krassimir Simeonov the “Military union “Vasil Levski” and “Bulgarian militia “Shipka” have structures in all regional cities of Bulgaria, and the total number of members exceeds to 24,000 people, 1,500 of which are in Varna, but because of the huge interest is introduced a 6-month probationary period for the new applicants.

The funding of those organizations is through the membership fees and a fund by voluntary donations of Bulgarian citizens with the promising that with these funds they will be sent to study abroad to be trained for the new unit for the special and antiterrorists operations.

“We are preparing people to be at all times ready to defend their home territory, home, family and children. We should be able to render assistance to law enforcement authorities and our pitiful remnants of our army to ensure security and sovereignty of our country” said in an interview for Darik radio on January 26th, 2016 Vladimir Rusev with the pseudonym Valter Kalashnikov. 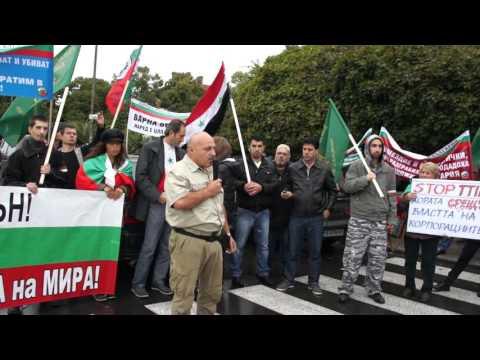 “The personnel of the battalion for special operations will be sent to accelerated training courses and retraining in the best leading educational institutions and training centers abroad. With advantages are former employees of the special operations forces, military intelligence, employees of the Interior Ministry and the security services and security or the foreign legion, “ – it is written in the site of the military organization. 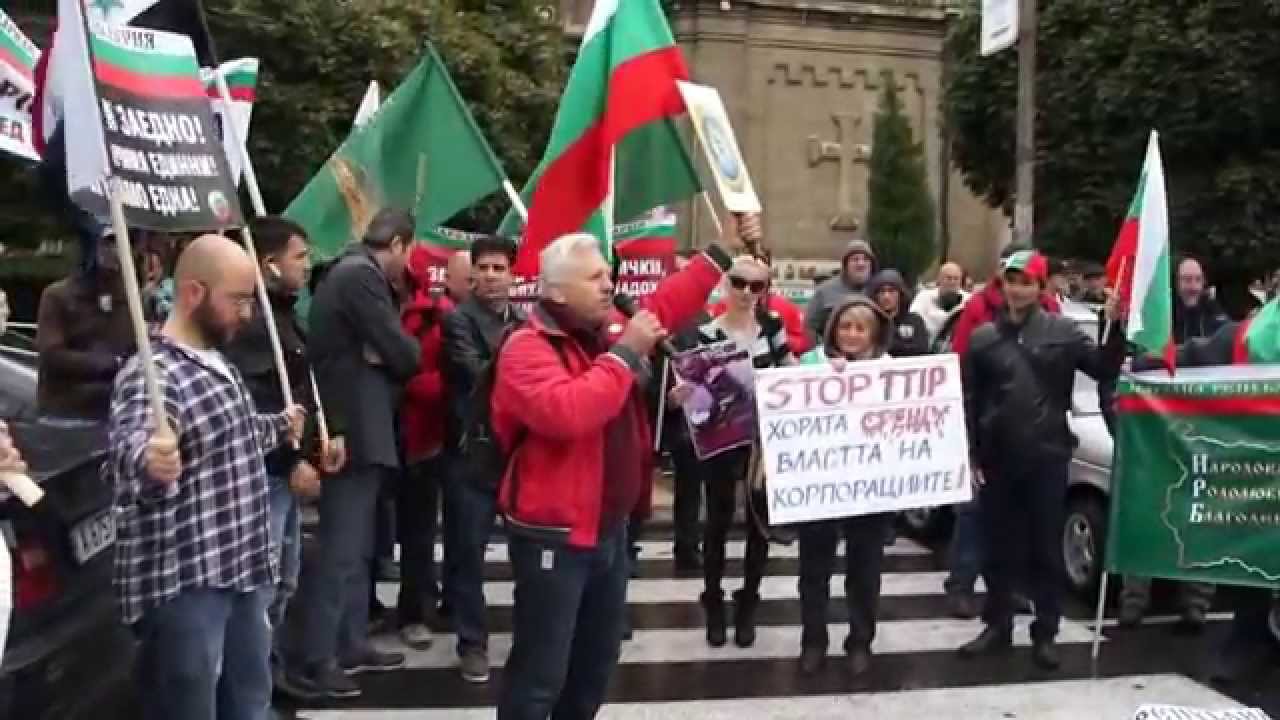 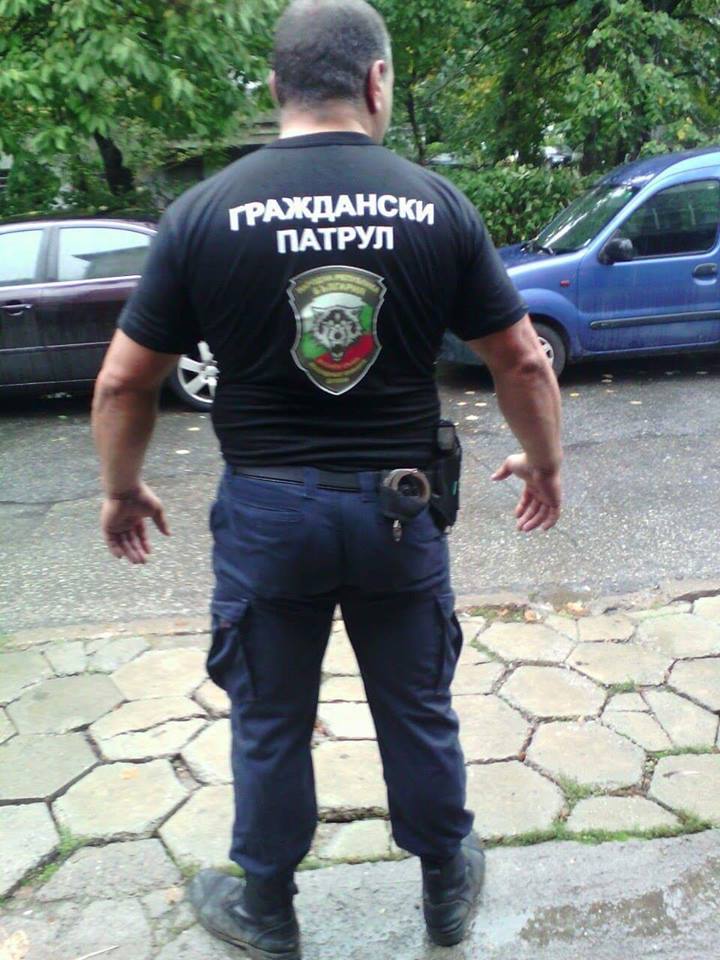 A guy from the “Military Union “Shipka”

Is it a coincidence that this “union” is widely advertised by the Russian project “Balkanskiy Front Bulgaria” led by Evgeni Viktorovich Novikov, a formal member of the parliament of Belarus (1990 – 1995), leading TV channel “Belarus 24” /On 15th October 2014 this TV channel is banned for broadcasting in Ukraine because of the fierce propaganda against Ukraine/ and from the summer of 2013 is leading an Internet program called “News of the Slavs” / “Novosti Slavs”. Novikov has dual citizenship, Russian and Belarusian. The series of propaganda related to Bulgaria are published in russiapost.su and on youtube.com. Evgeny Novikov describes itself as a public figure working in the field of human rights, but definitely deals with anti-Western geopolitical strategies.

Video of Novikov published immediately after the second forum of “Unification for Bulgaria” on YouTube.

A video message of Novikov addressed to the Bulgarian citizens posted on his Facebook profile on April 16th, 2016 with the following accompanying status: “April 20th, 1876 in Bulgaria began the fateful April Uprising, which became one of the main causes of the Russian-Turkish War (1877- ’79). The Turks were finally defeated. And on April 20th, 2016 Bulgarian patriots gave an ultimatum to the traitors by all the pro-Western colonial administration of Plevneliev – Borisov /The President and the prime minister of Bulgaria in now days/. Bulgarians – rebel! ”

Such appeals are against the national interests of Bulgaria and the Bulgarian people and a further evidence of the link between paramilitary organization in Bulgaria and a Russian “expert of the Russian world”.

In the Russian news-front.info site there are several materials with propaganda by Evgeny Novikov with populist appeals to Bulgarian citizens by directing them to the newly formed organization “Unification for Bulgaria”. The viideo messages were posted on several Russian sites, for example here.

The stripes and the chevrons on their uniforms, with which are dressed the former military reserve officers and retired sergeants of this “union” in a video addresses them with the colors of the Bulgarian flag and the words “Republic of Bulgaria” / Narodna republika Bulgaria – same name from the Soviet times, and has a depict of a figure of a head of a wolf. The “union”” is using very old Bulgarian symbols from the First Bulgarian State (between 7th and 10th centuries), so to be easy to gather more people around them. 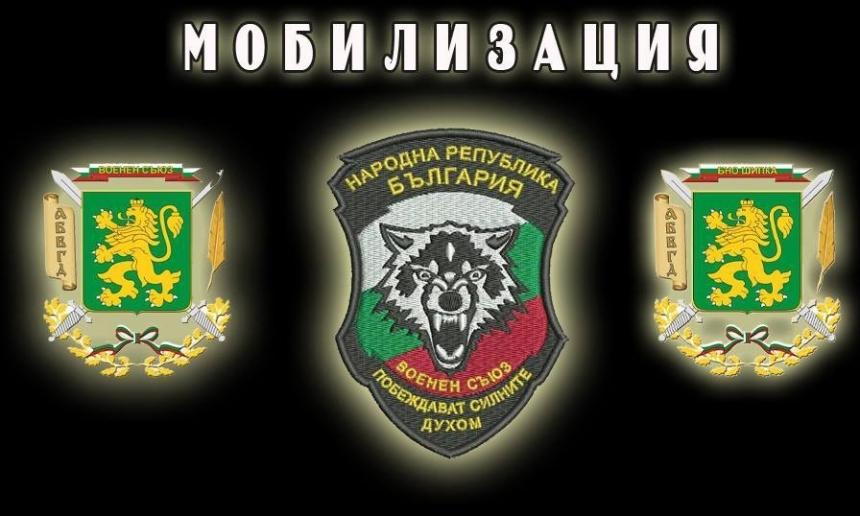 A recent video from that military formation:

In this video posted by the “Military union Vasil Levski” is stated that on April 20th, which is today the new pro-Russian organization “Unification for Bulgaria” will participate an organized protests in Sofia on the occasion of the date associated with the April uprising in 1876. In the video they claim that they will no longer make “walks in the woods” to hunt refugees and to “clean them from the refugees.”

Another interesting point that we have found also in that same electronic site where is posting the Bulgarian “journalist” Boris Anzov is an Interview with Valter Kalashnikov from November 11th, 2015: “Valter Kalashnikov – a Bulgarian volunteer in Ukraine speaks out” – he is presented as: “He is a former professional military, graduated from a military artillery school in the town of Shumen. He has worked in combat units of Bulgarian army before “the counter-revolutionary pro-Western coup by a group of foreign agents in the Central Committee of the Communist Party and the government in 1989,” as he says. Currently he is in the reserves. He has participated as a volunteer on the side of Orthodox and Slavic peoples in several local military conflict s in the Balkans and in the republics of the ex USSR. Including as a commander of the reconnaissance-subversive military group in Eastern Ukraine, from where he recently returned. Prefers to present itself as Valter Kalashnikov, so like that not to expose his family in danger. “- Link to the interview with Vladimir Rusev

Here’s how Rusev / Kalashnikov answers a question about Ukraine in this propagandistic website of Kremlin:

– The crisis in Ukraine – how do you expect to be resolved?

– The outputs are two – First is to win the war by the militia / народно опълчение and capture Kiev or nationwide uprising and overthrow of the Jewish fascist  junta violently usurped power over Ukraine. The battle for Ukraine is yet to come. And it will not be won by Putin and Russia rather than the United Slavic Orthodox troops. The population of Eastern Ukraine will not forgive that had been destroyed all the water towers, the transmission lines, the electrical substations, the Orthodox churches, the gas connection stations, the heating systems, the hospitals, the schools, the kindergartens, the railway stations, the factories and the refineries. No one will forgive for the burned and destroyed land and the hundreds of thousands massacred by mercenary battalions of the Jewish oligarch Kolomoiski – civilians and volunteers.”

Another video of that military organization with anti – Bulgarian and pro-Russian statements:

Some photos from the various protests of these paramilitary organizations  that we have found in the public sources: 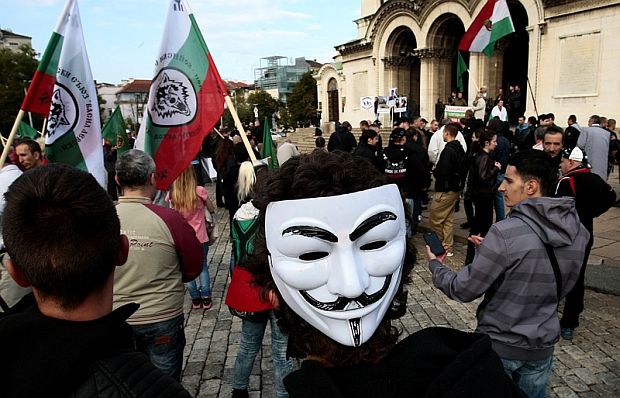 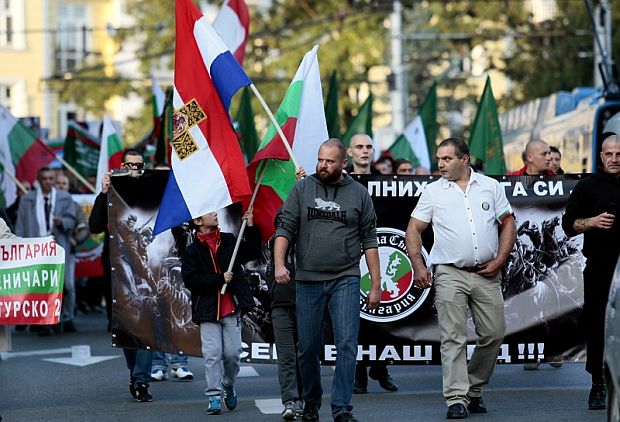 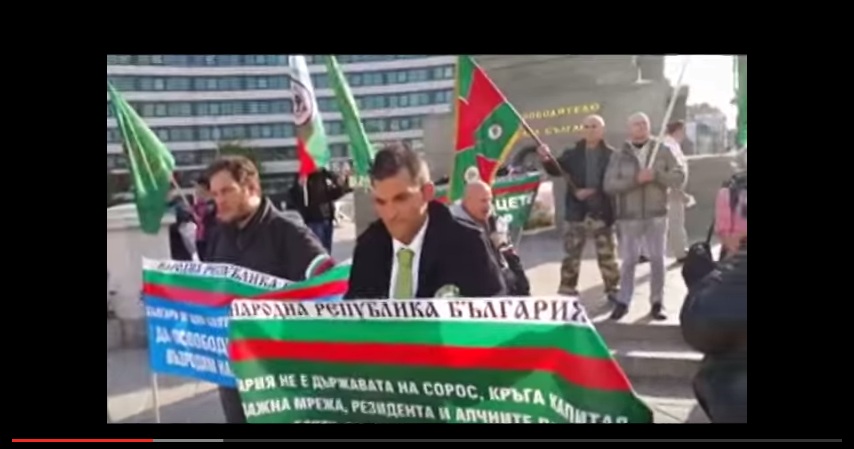 This special investigation is to show the importance and the apparent threat of the feasibility of the Ukrainian scenario in Bulgaria. The particular concern is the fact of the active growth of the forces and resources of the pro-Russian paramilitary organizations in Bulgaria coincides with the resurgence of neo-imperial policy of Kremlin configured and declared in the Munich’s speech of Putin in 2007 and coincided with the activation to implement imperial concept of “The Russian world” by the Moscow patriarchy of the Russian Orthodox Church.

The international volunteer community InformNapalm has already informed about such paramilitaries in Belarus “Special investigation: Active preparation of an orthodox Taliban in Belarus”

We hope that the Bulgarian institutions are aware about those anti-Bulgarian organizations calling for armed rebellion against the democratic government in Bulgaria and have taken measures to protect the national security of the Bulgarian state and nation.