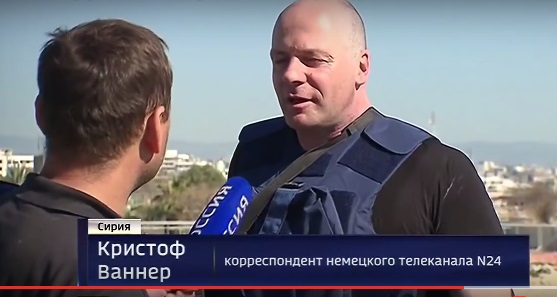 Our recent investigation in which we analyzed in details the Russian information operation in Syria caused a media hype. The first part of the investigation introduced evidence, according to which we made the firm conclusion that the shelling shown by the Russian side was staged for the purpose of psychological influence on the Russian and international society. Also we unveiled the participation in this information operation of the Kremlin’s Bulgarian-born journalist who lives in Moscow and graduated from the Russian University of Peoples’ Friendship. The culmination of the first part of the dethronement was identification of the personal involvement into this play of Igor Konashenkov, the head of the press service and information of Russia’s Ministry of Defense.

After the InformNapalm’s publication, Igor Konashenkov was reprimanded with the formulation: “For insufficient safety measures when working with media representatives in the special operations area”.

Although we know that the real reason of the reprimand was information leak about a staged fire that compromised the planned information operation of the Russian Federation.

InformNapalm volunteer community continued to search new proofs that appeared after the first publication. This resulted in finding new details which point at the figurants who are nothing more than the Kremlin’s tools used in PSYOPs aimed at creating public opinion in favor of interests of the Russian Federation abroad.

First, let’s examine other 2 videos linked to the ‘shelling of journalists in Syria’ which have episodes taken from different angles:

Let’s compare these videos and single out the APC vehicle arrival moment. There are 2 persons standing against the wall – a person in military outfit (in the 1st part of investigation we suggested that it was major general Igor Konashenkov) and a man in blue shirt. 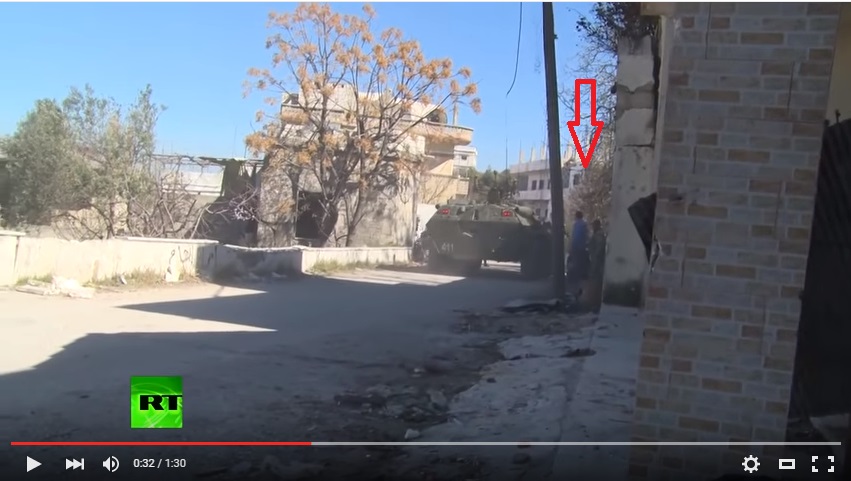 Clip No. 2 starts when the man in blue shirt runs past and there is nobody near the wall when the APC arrives. 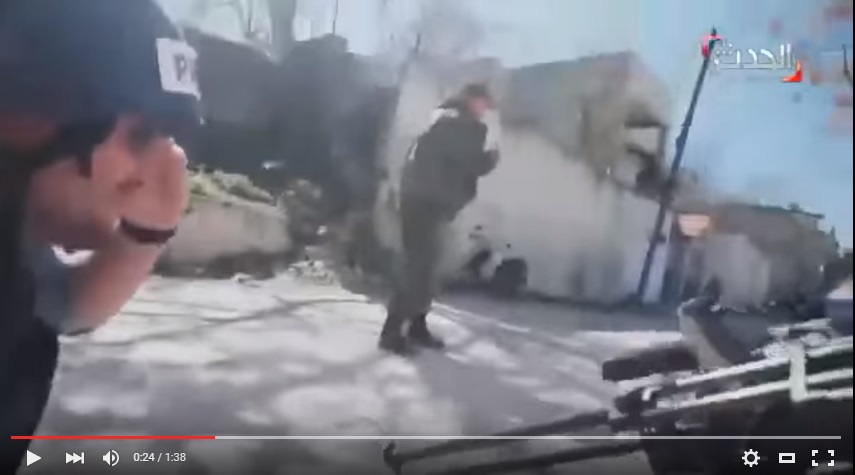 Clip No. 3 – the man in blue shirt is standing at the wall, but the serviceman is absent. 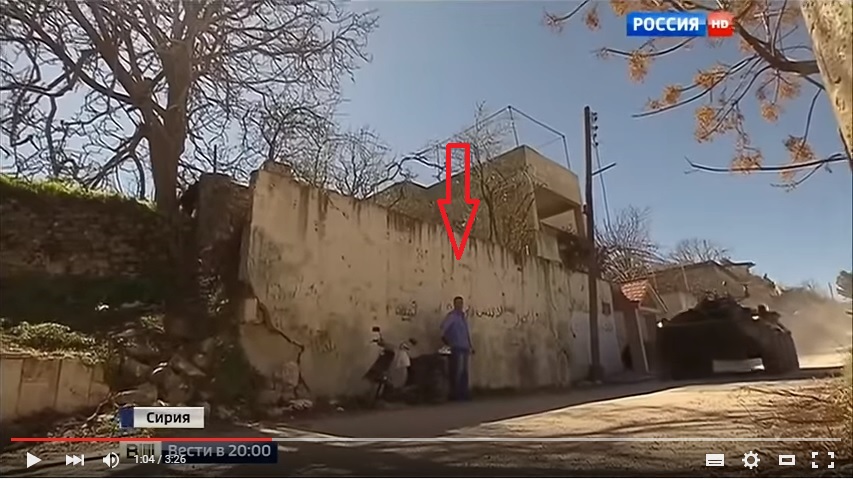 These are additional facts proving that the ‘event’ was filmed in several takes. We can judge about the ‘danger’ of the situation based on the behavior of the people against the wall in the first and second videos – unprotected people stand quietly while the others are crawling in the dust, depicting the fright.

Let’s consider another point. In the clip No. 1 at the time of the APC approaching, nobody is crawling or lying on the road near the house, people took refuge behind the building and wait. 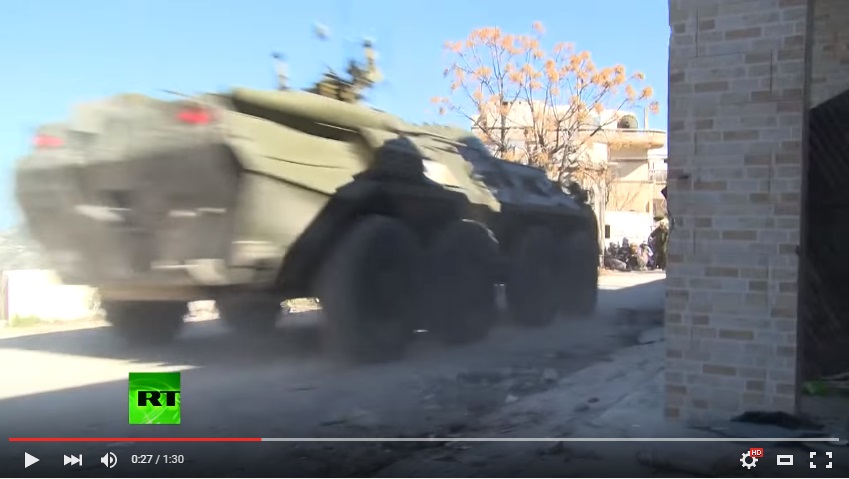 But in the clip No. 2 we see a guy ‘heroically’ crawling on the road before the APC’s arrival. On this slide he lies at the edge stone on the right. He is located just across the operator of the first video, but it is different in that video. This, as well as the different set of people near the wall on the left, proves that there were multiple takes. 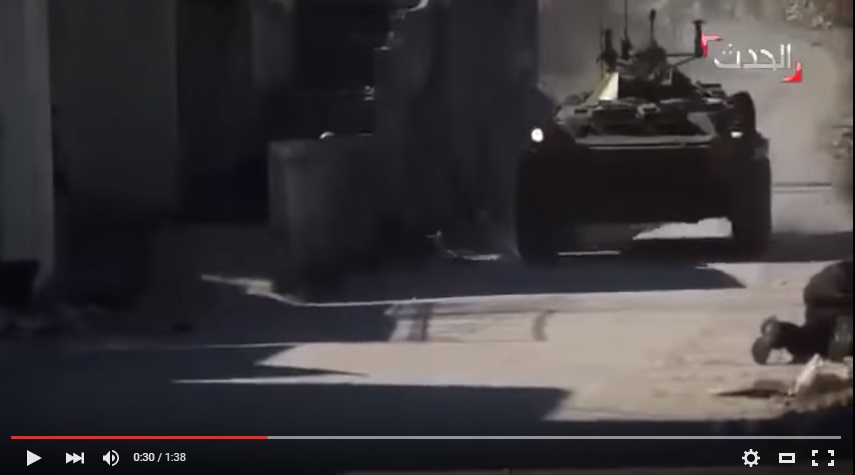 The most interesting can be seen in the footage by ‘Russia 24′ (clip No. 3) – foreign journalists were spotted, who by their presence covered this show. InformNapalm’s investigation proved that they purposefully took part in this Russian media-aggressors’ event. Possibly they knew they were taking part in the show. The reporters saw that for the sake of this footage the living areas were really shelled, meaning that they participated in the war crime. Interestingly, the Bulgarian-born journalist Boris Anzov (more in the first part) who lives in Moscow and spreads the Russian propaganda in the information field of Bulgaria, recently presented a gift to Sergei Lavrov, Russia’s Minister for External Affairs, and published his words about Bulgaria, where it was compared with the ‘beloved and brotherly Ukraine’, which sounded cynical against the backdrop of direct military aggression. 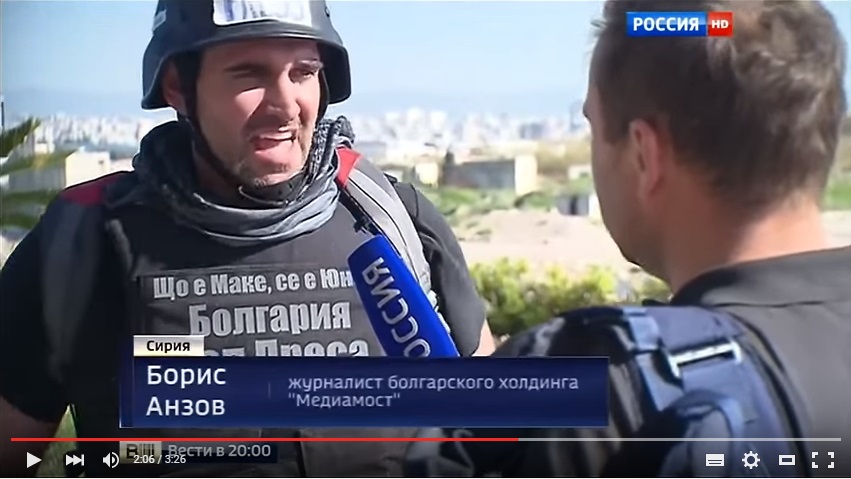 In the second part of the investigation we’d like to introduce you another figurant – some Christoph Wanner, a reporter of private German news channel 24, which the Russian anchors meaningfully named a ‘state channel’. 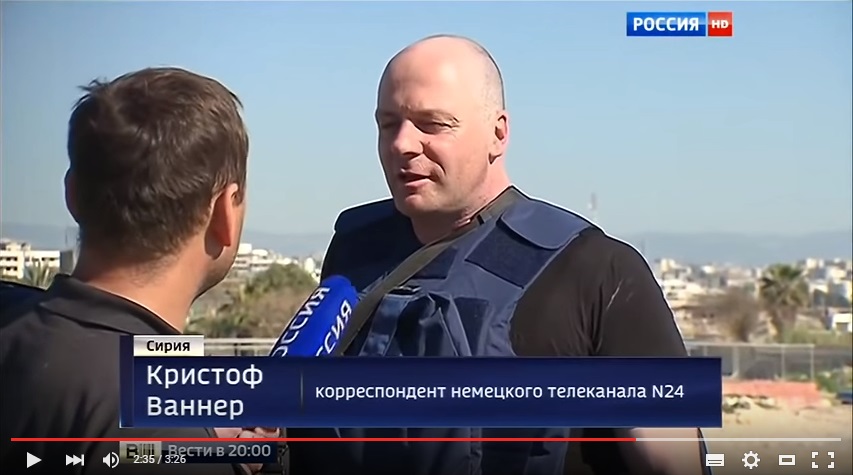 Christoph Wanner works in the German media for a long time, and each time he appears in the field of interests of the Russian Federation, deceiving the German audience. In 2008 he was in Georgia talking about the power of the Russian army, people’s reluctance to fight, grievances against the Saakashvili’s politics – all the standard set of the Russian propaganda. By the way, while he was reporting from Tbilisi, refusing to go to a war zone:

– You have not traveled to the war zone. Why? It was not possible?
– I can tell you why. Because I’m afraid for my own life. I can work in Tbilisi, where everything is more or less under control. But I will not go to Tskhinvali for the simple reason that I’m not crazy – link

It is strange, since he went to Syria to broadcast being under the shelling… Or maybe some security guarantees were given to him by the organizers of the performance?

In the spring of 2014 Christoph is again at the forefront of the Russian interests, telling that the Ukrainian government can not cope with the situation in the country, the Ukrainian army has insufficient forces to re-establish control over the eastern regions, anticipating and justifying the Russian military aggression against Ukraine – link, link, link, link.

And now this reporter is in Syria, where an information operation is being carried out. And he not only describes the events in favour of Russia, but also plays an active role in the scripted show. Perhaps Christoph has long been involved in intelligence gathering for the Russian secret services, but this assumption to be verified by the German security services staff.

By the way, the ‘Russia 24’ TV channel’s journalists not only create a false event and misrepresent it as reality, they can not stop lying even in the details. In this staged reportage they say that it is 3 km to Turkey, although looking at the map, you can easily make sure that the distance to the nearest point on the boundary is 7 km. 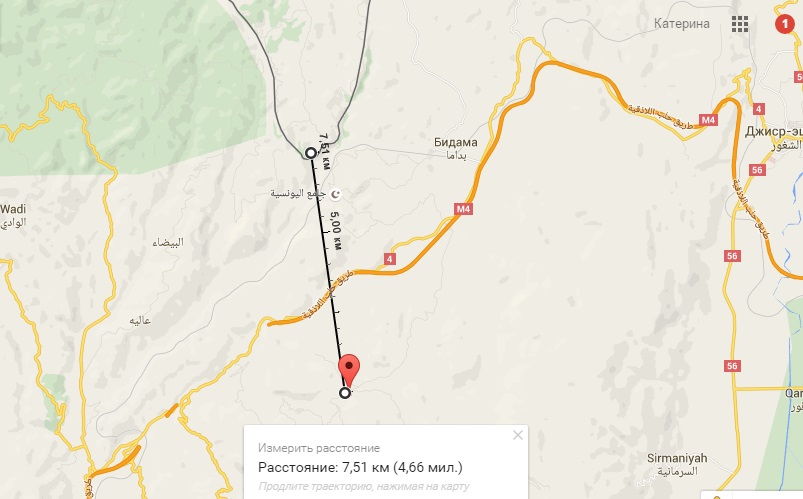 Lie is a systemic disease of the Russian media. It is understood by many security experts and media sphere workers around the world, and we have seen a positive example when the German prosecutors filed a case on a false story created by the Russian television.

We hope that this investigation will attract the attention of European and national associations of journalists, who may consider the activities of their colleagues from the standpoint of professional ethics, as well as the competent authorities of Germany, Bulgaria and NATO structures that can give praise to what has happened in terms of the preservation of peace and stability not only in the Middle East, but also in the Western Europe.

To get acquainted with the InformNapalm materials on the situation in Syria, visit this link.

2 Responses to “Analysis of the Russian PSYOPs in Syria. Russian Staged Shelling. Part 2”