What is in the Details? Another Kremlin’s False Flag Operation in Syria Debunked 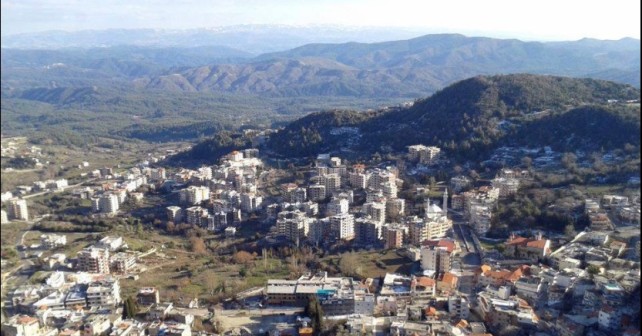 International community is outraged at Russia’s blatant violation of the truce in Syria. Although shelling and bombing have become less intense, they have not ceased. The French Ministry of Foreign Affairs urgently convened a working group on the violations of the truce conditions. According to Jean Marc Ayrault, the Foreign Minister, Paris has data of attacks in the areas controlled by the moderate Syrian opposition – link.

What was Russia’s response?

The official representative of the Defense Ministry of the Russian Federation, Major-General Igor Konashenkov made a statement about the shelling in the Syrian province of Latakia in which foreign journalists were caught under fire. Allegedly, it was conducted from the territory of Turkey. The Volunteers of InformNapalm decided to make a brief analysis of one of the videos (video) about the “shelling in Latakia”.

In Donbas, there is a new folk wisdom – Russian journalists are a sure omen of shelling and other provocations, often accompanied by casualties and destruction. Clever locals have developed a reflex – you see a Life News journalist, you run! ENG crews of Russian channels are also very apt at staging “the atrocities”.

So, those “foreign journalists”, from the group of featured on the video, who are they?

Meet one of them, Boris Anzov, born in Bulgaria, studied in Russia at the University of Friendship of Peoples, currently living in Moscow, working for Media-Most Ltd.

This company once made part of the Gusinsky media holding, then it was taken over by Gazprom (wiki – NTV, Russia). It remains to be seen whether a journalist residing in Moscow, working for a Gazprom offshore media company with a Gibraltar registration (for the convenience of giving it a “foreign” status for the sake of info wars) has the right to represent Bulgaria. We hope that the competent authorities of Bulgaria, a member of NATO, would give due attention to this issue. 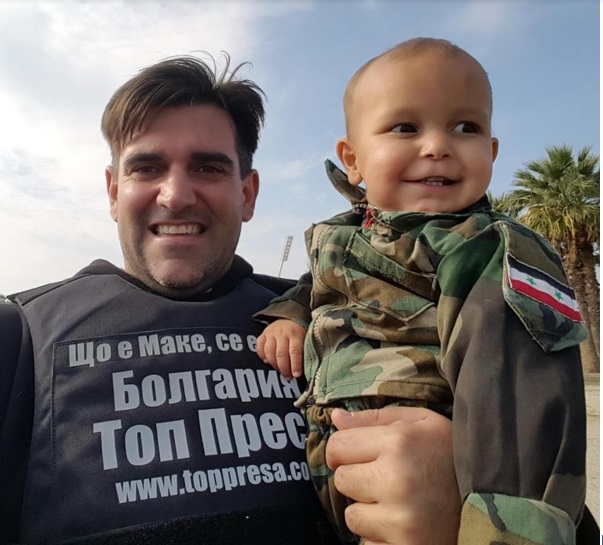 On 28 February, Boris is at a reception in the mansion of Ministry of Foreign Affairs Of The Russian Federation in Moscow at 17 Spiridonovka str. He takes pictures with Maria Zakharova, the Director of the Department of Information and Press Department of the Russian Foreign Ministry. On 1 March he “gets under the fire” in Syria and on the same day departs from there. Such a focused trip. 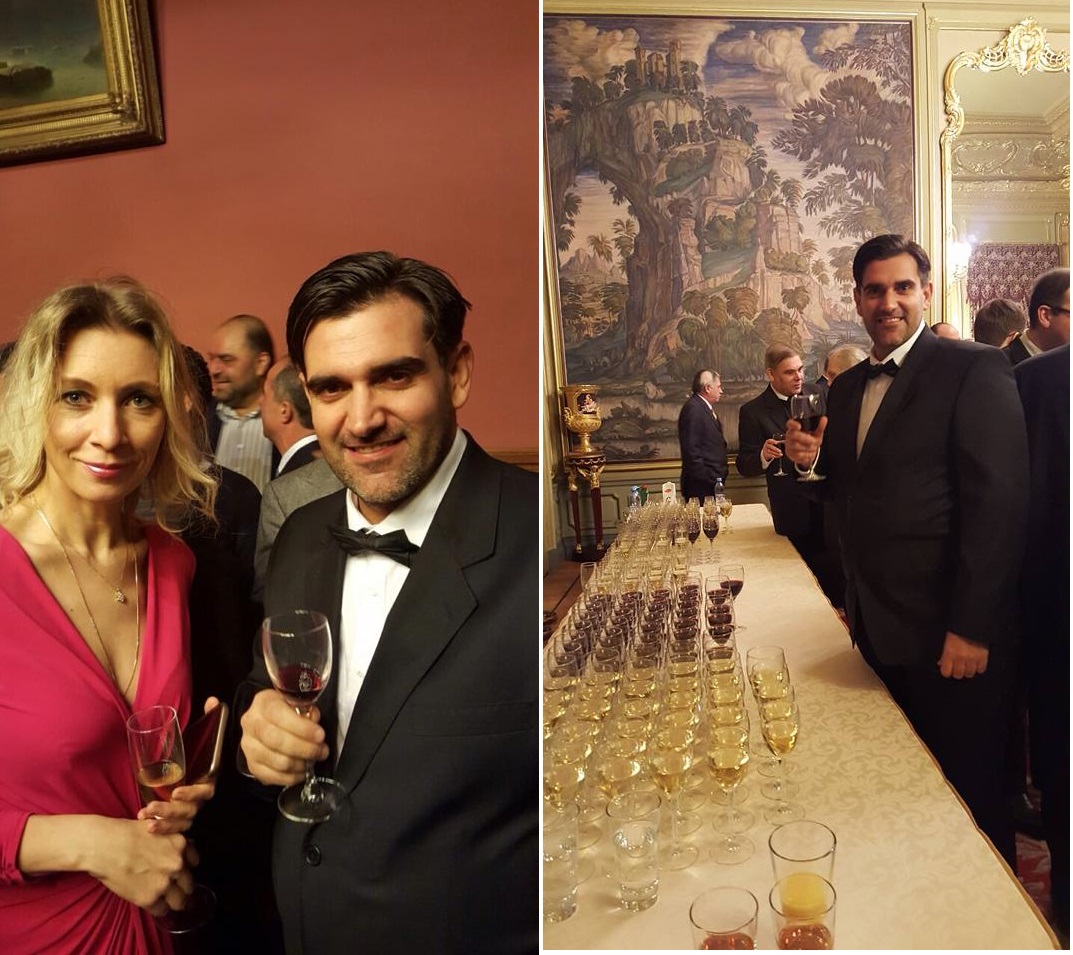 We will take a closer look at this pseudo-Bulgarian journo at another occasion, but at the moment let us have a cursory walk through the special op organized for the sake of this video of the “shelling”. Unfortunately, the video is not whole, it is an edit of RT.

The video starts with an explosion. It looks like the camera was pointed towards the explosion in advance.  The explosion occurs in a half-ruined area, explosions are not accompanied by a characteristic whine of the incoming mortar rounds. Note the strange nature of the explosion that is not characteristic for heavy ammunition (which explode after driving into the surface or penetrating the building, and as a rule does not cause such a spectacular flash). Mind the graffiti in the Arabic language. 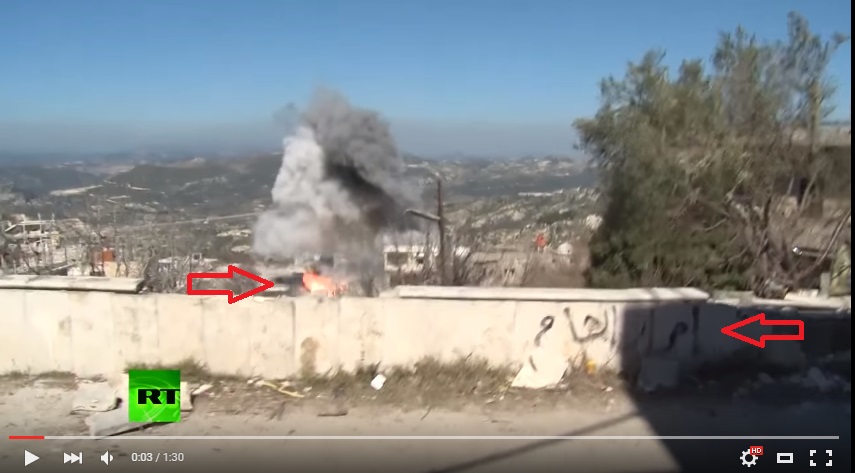 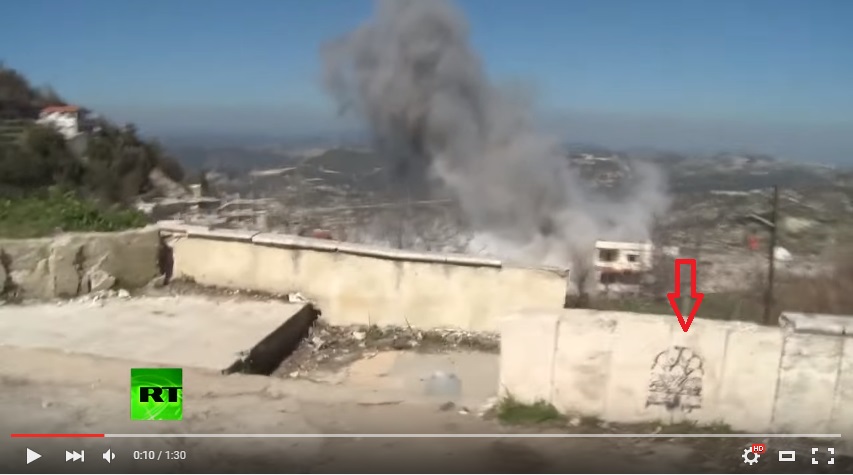 Instead of filming what is happening, the cameraman moves the camera from one graffiti to another. 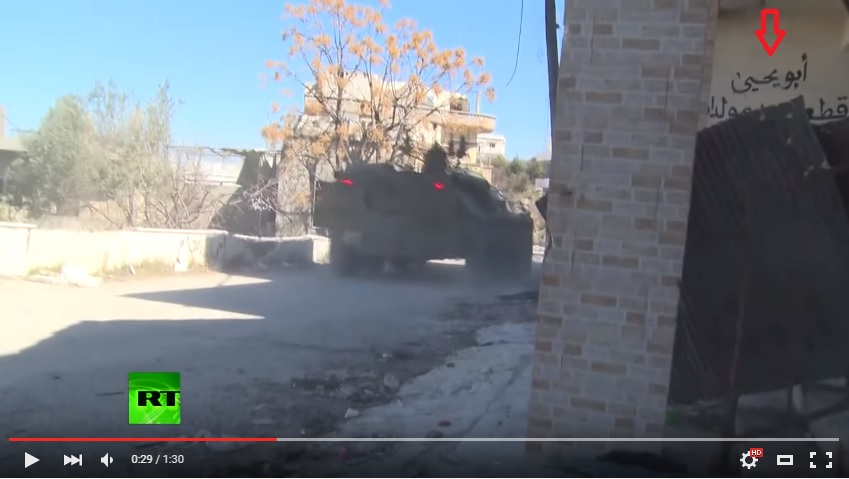 To the right, a man in the blue shirt is clearly visible calmly standing at the wall, facing other people. He wears no helmet or body armor (he is there at the time of the explosions and during the arrival and departure of the APC). 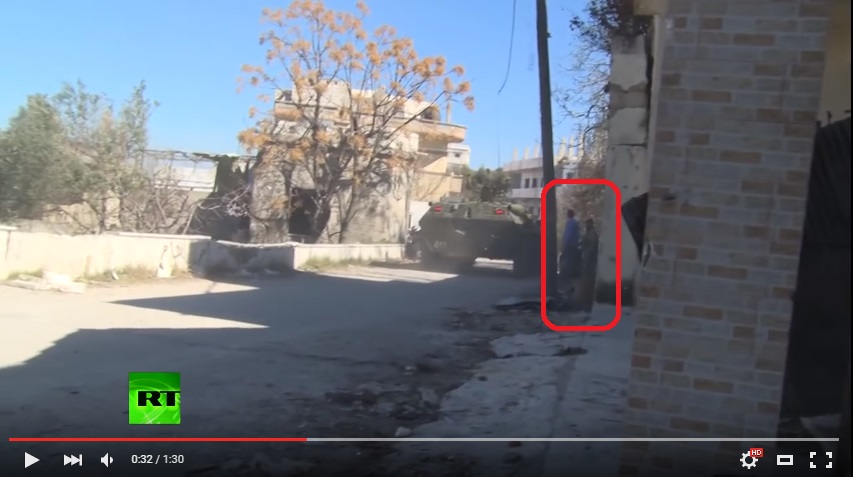 At 0:53, again the stage director is well visible at the wall. The man in the blue shirt remains in the same position, not hiding behind the APC (wearing no helmet and body armor) and not running.  And closer to the pole, there is a Russian military officer wearing a forage cap, but no helmet or body armor, who is also not really flustered. 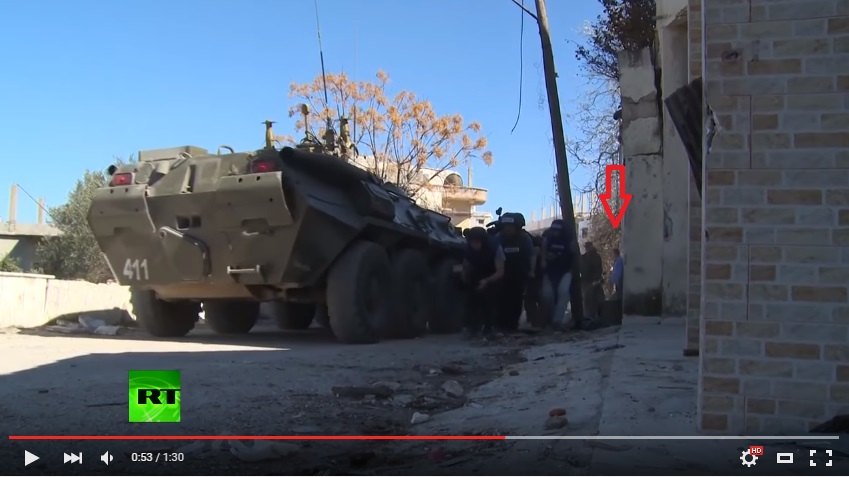 The hiding behind the APC is very contrived and unnatural, the journos trot lagging behind, but look not too worried. 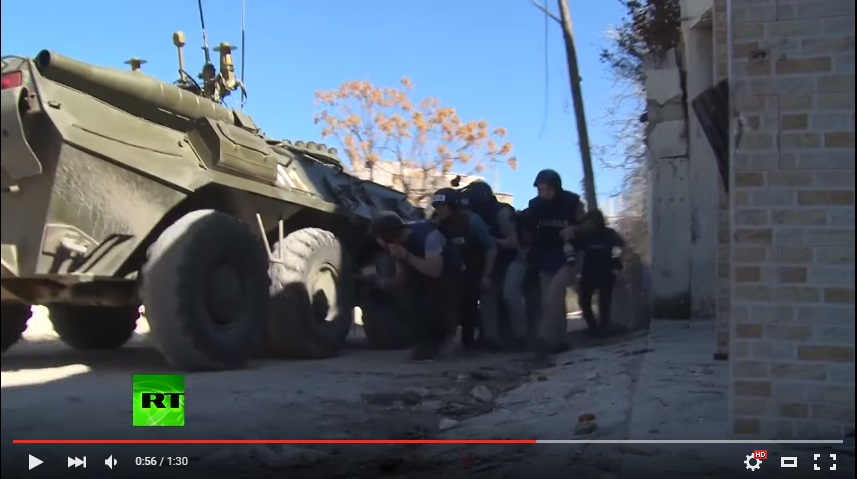 Other people pretend to hide, although an elevated opening between two buildings looking towards the explosion is a rather poor shelter (take note of the leg in the blue trousers).  Instead of focusing on the fleeing people, the cameraman once again shows us the graffiti on the wall. 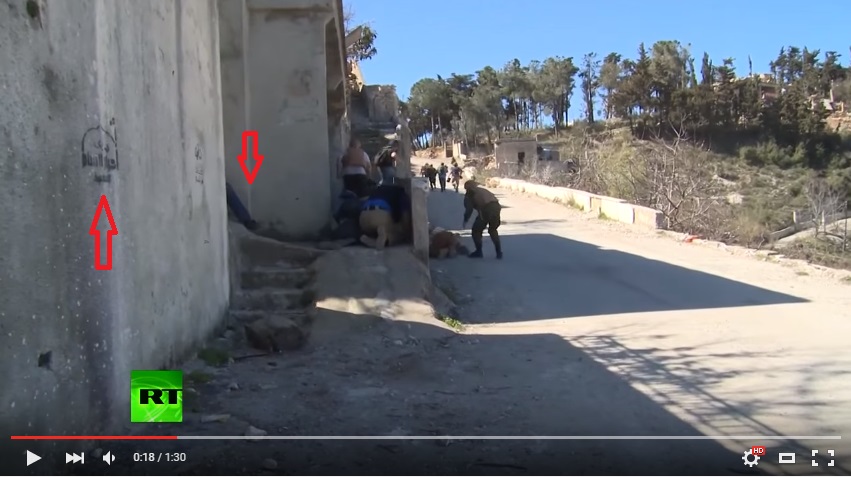 What is wrong with this cameraman? There is drama unfolding, the shelling, the APC moving in and out, people fleeing and the cameraman has nothing better to show than the graffiti on the walls. 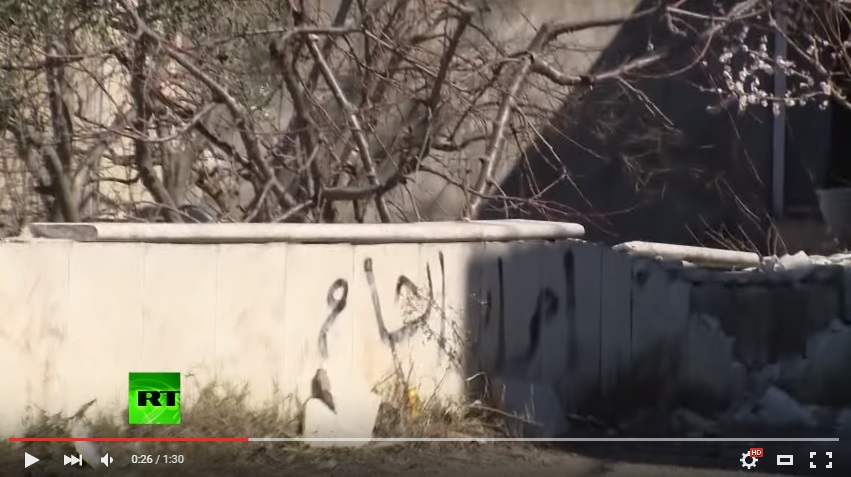 Among the fleeing crowd, there are Russian servicemen in tactical gear and some journalists without body armor and helmets. And the lady in red blouse on high heels was clearly not dressed for the scene of the hostilities. And again the cameraman draws our attention to the graffiti in Arabic. 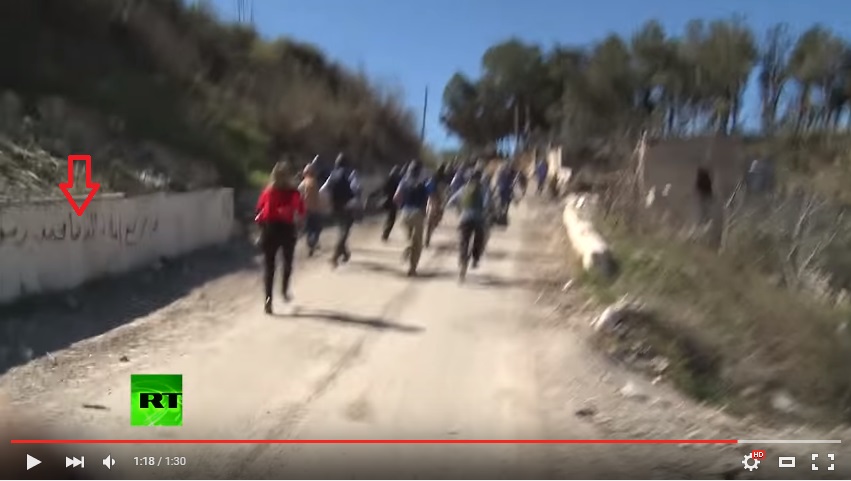 What is this place? This is Kinsabba, a town not far from the coast. Even in such a short video it gives an impression of being completely destroyed (no unscathed buildings are visible). The condition of the buildings suggests that local residents simply have nowhere to return to, contrary to the allegations of the regime advocates arguing about Assad’s “liberatory” war. So far, this war has only been “liberating” the territory of the Syrian populace, as we have seen in the case of this tiny town in the mountains of Syria. 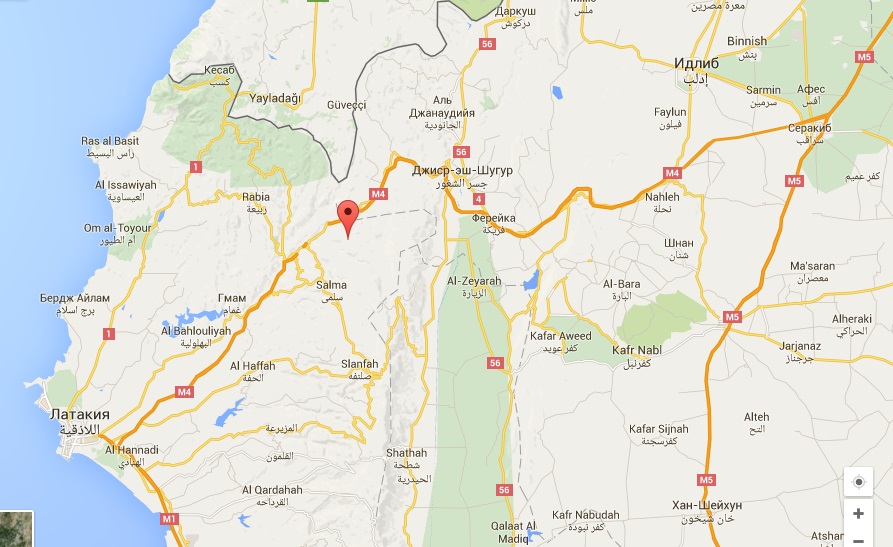 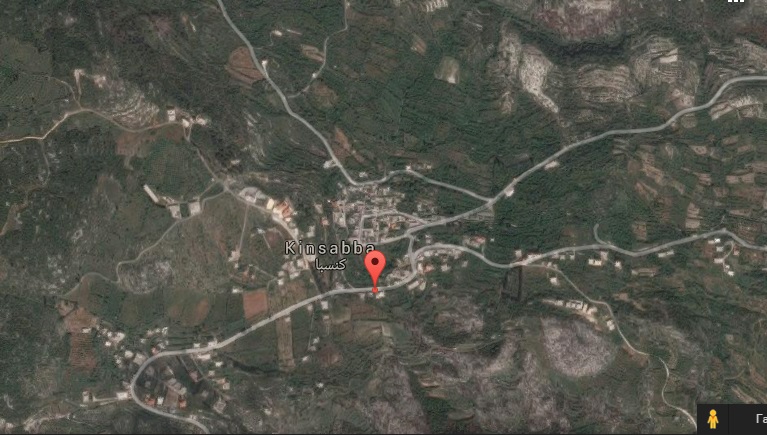 Some of the landmarks allow us to accurately locate the scene of the shelling and the direction of the camera (to the north). To the left of the explosion, there is a white building with a red tiled roof  on a slope, which is also well identifiable on the satellite images.

Such attention to the graffiti in Arabic, hinting at the anti-Assad factions is unconvincing, it strongly smacks of a false flag operation. Such an amount of graffiti, what is more, related to two different Islamist movements is way too much for such a small area. Moreover, the idea of the aimed shelling of the place from the territory of Turkey is rather doubtful.  The distance to the border is about 8 km, this is on the very range limit of the most powerful mortars, and there is no direct line of sight.

So, let us consider what this video really shows.

Russian info-warriors have tried to hold another false flag operation, just like in the Donbas region of Ukraine. Some journos were specially bought to Syria. Most likely, a feint shelling scene has been carefully elaborated, a couple of mines or hand grenades were blown up. The group was really taken to Kinsabba, recently captured by the government forces, another Syrian town destroyed by the continuous shelling and bombing of Assadite and Russian forces.  They spared no effort to bring the group to some real settings, but were busted by the behavior of the people in the frame edge zones, ludicrous camera work and poor casting.

You should put more heart into your work, comrades! InformNapalm is watching you closely.

3 Responses to “What is in the Details? Another Kremlin’s False Flag Operation in Syria Debunked”