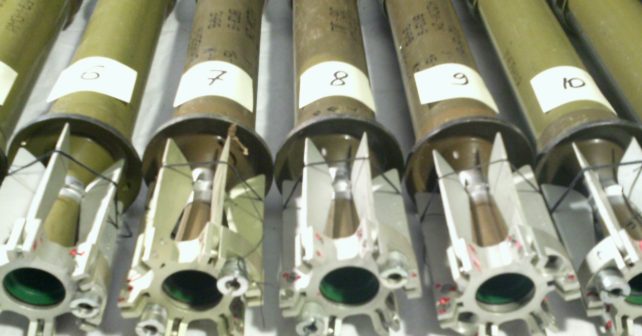 The Russian hybrid aggression in eastern Ukraine utilizes a complex combination of classical military operations, terrorism and criminal behavior on the battlefield to achieve political aims of the Kremlin elite. In the Editor’s Introduction to the handbook Military Balance 2015, hybrid warfare is interpreted as “the use of military and non-military tools in an integrated campaign designed to achieve surprise, seize the initiative and gain psychological as well as physical advantages utilizing diplomatic means; sophisticated and rapid information, electronic and cyber operations; covert and occasionally overt military and intelligence action; and economic pressure”.

In this investigation, volunteers of InformNapalm analyze one example of how Russian occupation forces use information component in the hybrid aggression against Ukraine. Their favorite scenario is to depict Ukrainian Army as a collective “war criminal”. This occurs as follows. At the contact line, the occupants conduct provocative shelling of residential areas and then falsely accuse the Ukrainian military for the attacks in the media.

However, quite often the occupiers make mistakes. On August 13, the pro-Russian NewsFront agency posted an article with a video: “Yasynuvata. UKRAINIAN PROJECTILE FLEW INTO THE HOUSE. MAN IS WOUNDED” . Following the aforementioned pattern, Ukrainian Armed Forces were accused in the shelling of a residential house and wounding a civilian in Yasynuvata, Donetsk Oblast. Was it the case? Let’s analyze the video in detail.

At 0:03 a facade of the house is shown, the damage caused by the explosion and projectile hit on the second floor is highlighted in red. Please note that the blasted window is covered with a sheet of OSB-3. We can also see pieces of insulation around the window frame. A window opening on the ground floor, also covered by OSB-3 board, is highlighted green. 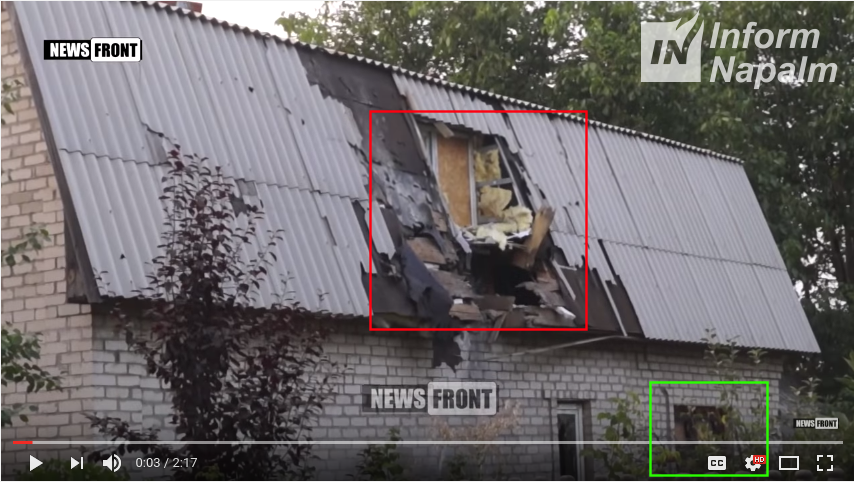 At 0:12-0:23 we see that the operator is filming the first floor of the house. In the screenshot below the damaged ground floor window is highlighted in green. Note the specific footmarks from grenade’s shank, as well as the wallpaper with floral pattern. 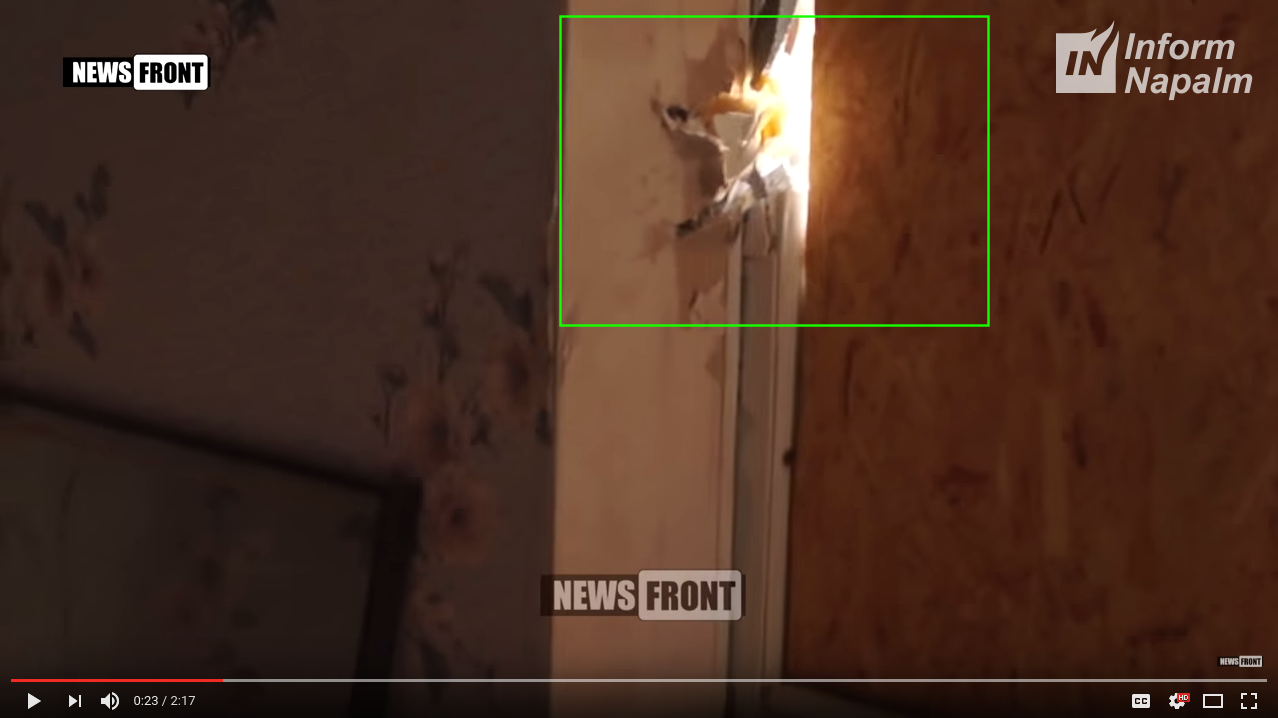 At 0:37 we see a trail of grenade’s hit. It is a room on the first floor because of the wallpaper with the same floral pattern. In the screenshot one can see clearly visible characteristic traces of PG-9 grenade shank, which is used by mounted grenade launcher SPG-9 or 2A28 Grom smoothbore gun (set on the BMP-1 armored vehicle). The detonator has malfunctioned, and the grenade “only” broke a window frame on the ground floor and drywall of the interior wall. Perhaps, Russian soldiers in a hurry forgot to remove a safety cap from the detonator. 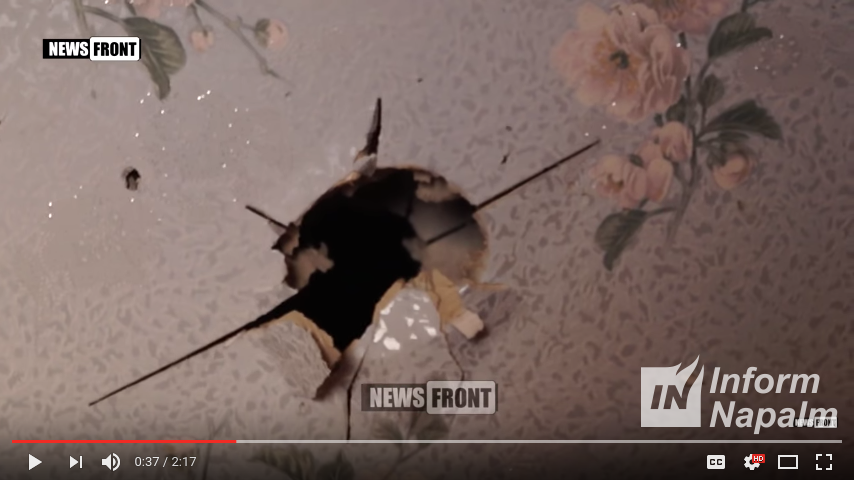 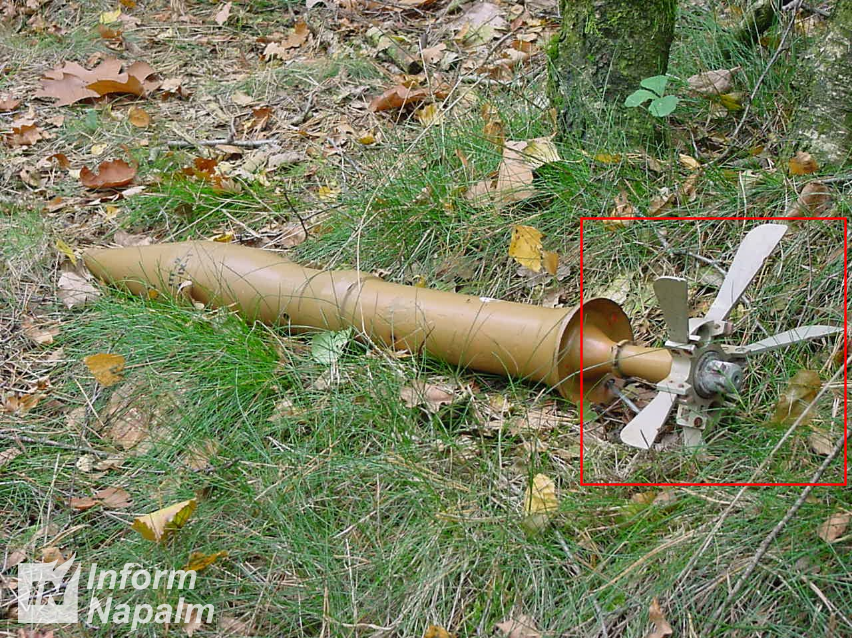 At 0:43 we see where the second grenade hit – through the slope of the roof under the window and through the floor joists. Also we see blue wallpaper. 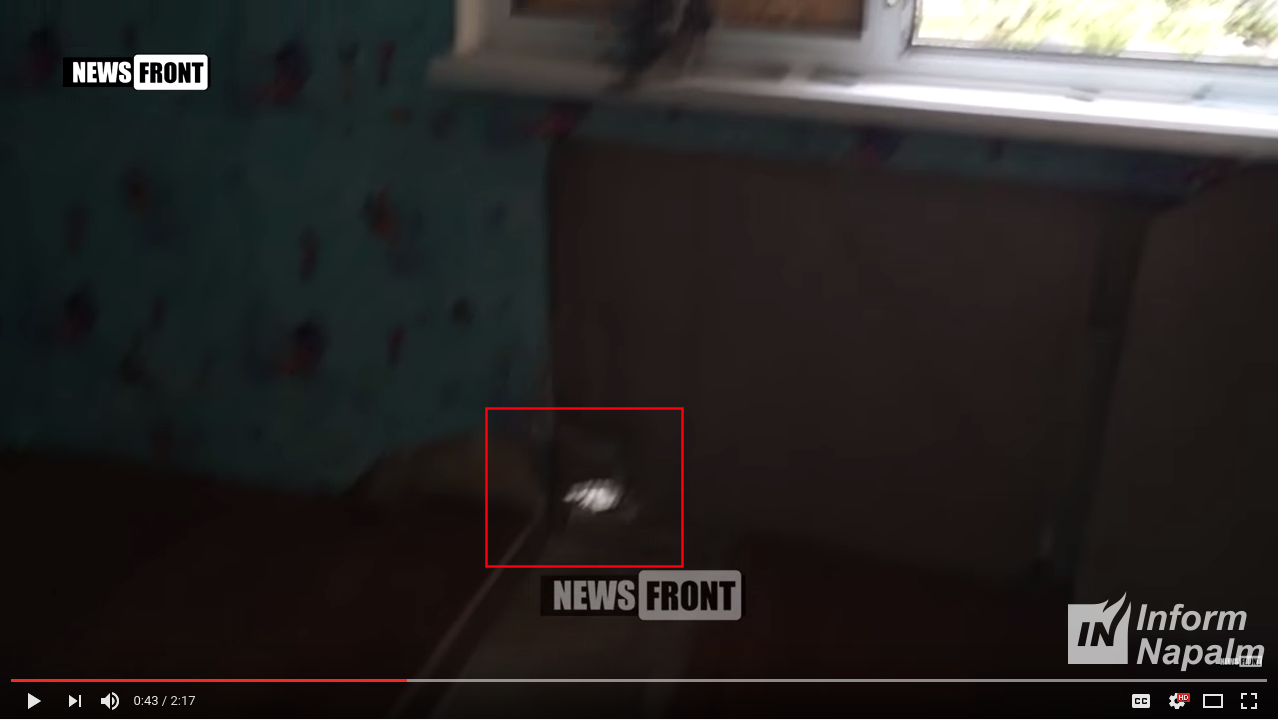 At 0:47 one can see two houses through the blasted second-floor window. The first house has light colored roof, the roof of the second house is red. Note the sheet of OSB-3 instead of glass and sticking insulation. 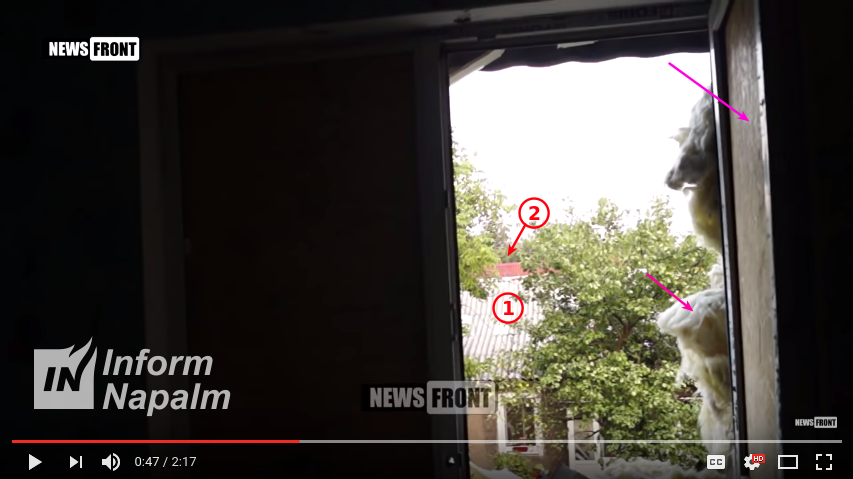 Now we can estimate the approximate direction from which the grenades came and damaged the building (shown with red and green arrows in the screenshot). Damage of the roof suggests that the detonator of the grenade that hit the second floor did work. 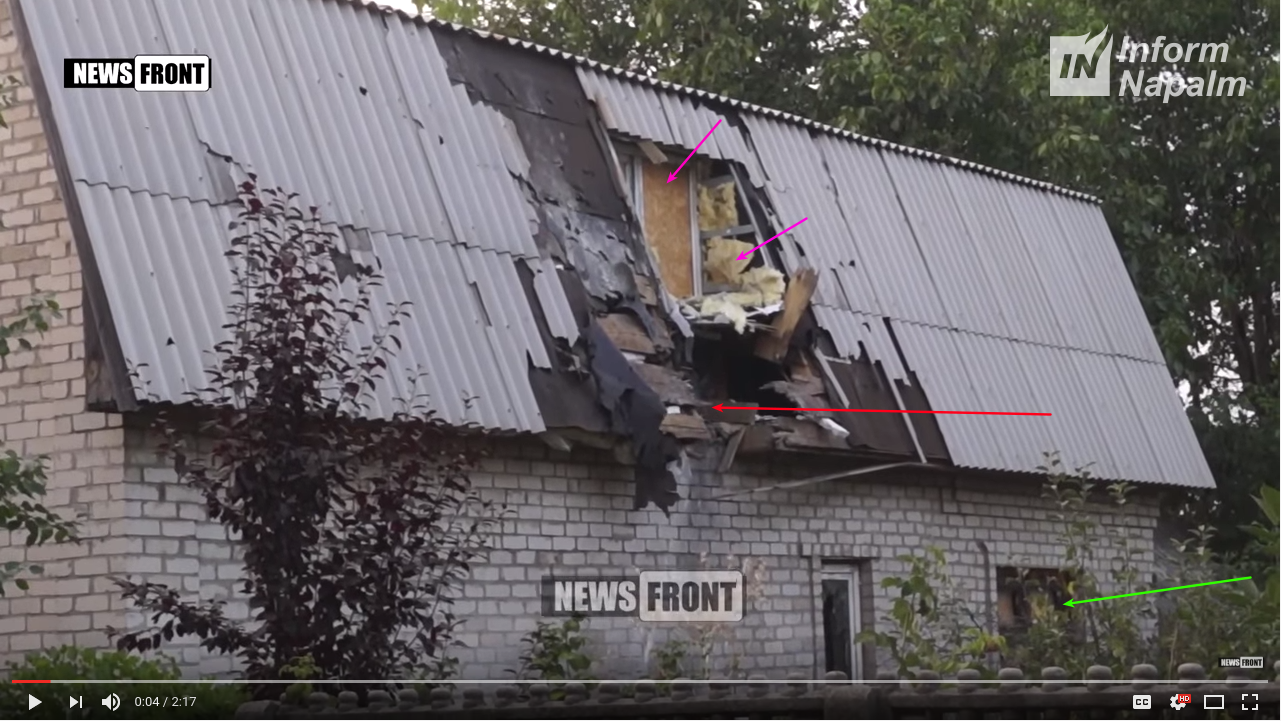 Using satellite images, we identified the damaged house (located in Yasynuvata at 7 Kalinin Street), and the grenades trajectory with respect to the adjacent buildings and parts of the world. 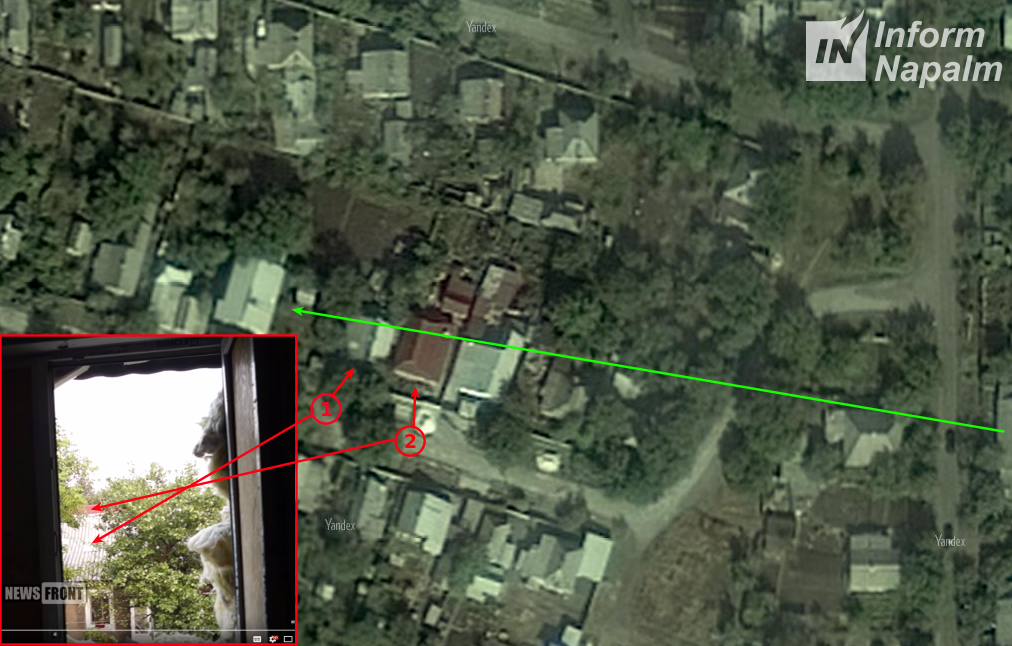 It turned out that the grenades came from the east, from the positions of the occupation forces. We present the screenshot of liveuamap service, where the controlled by Russian invaders territory is painted pink. The blue arrow points the direction of the shooting. 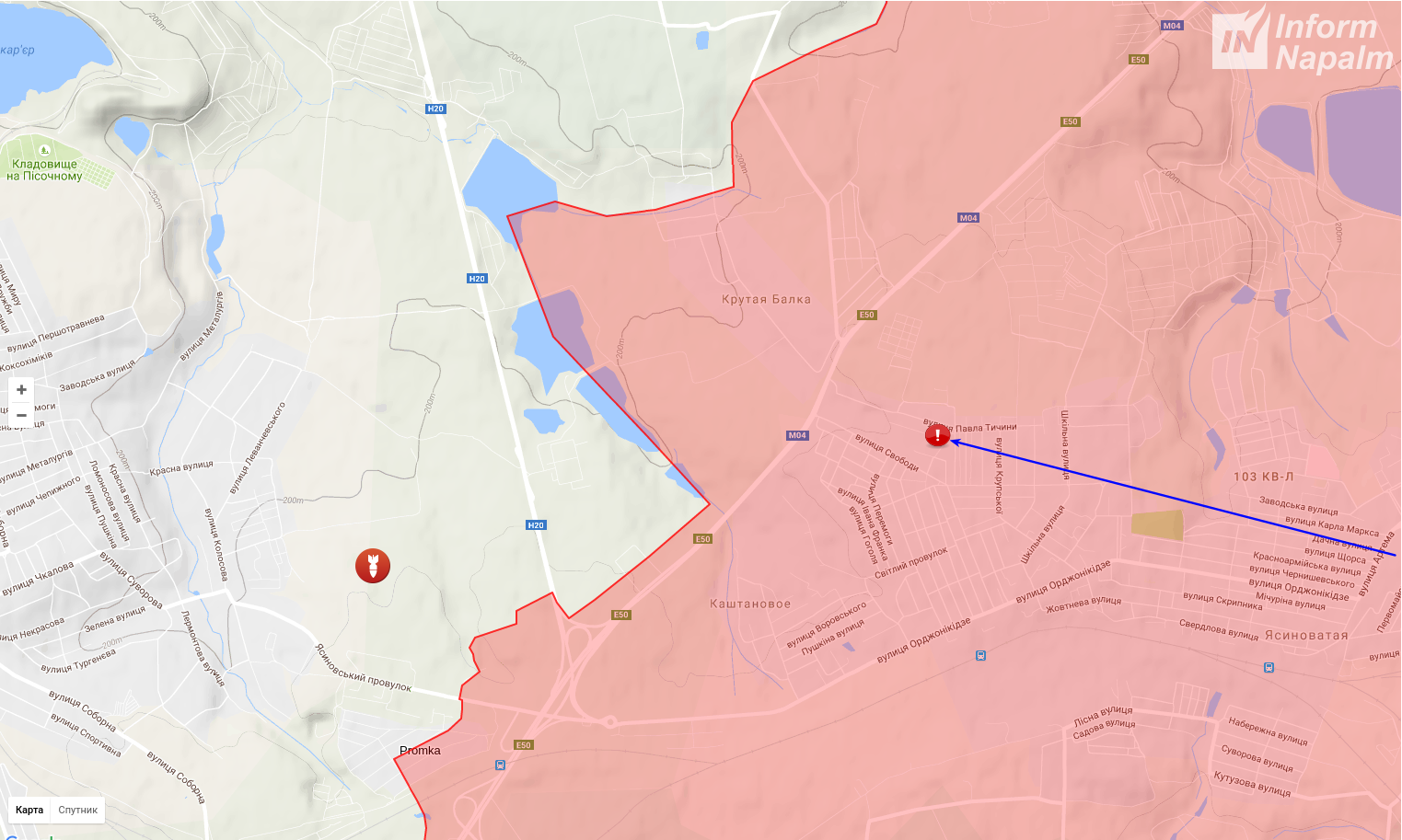 Conclusions: to create fakes in the hybrid aggression against Ukraine, Russian occupants use all available means and methods, even those that threaten lives of civilians. But lives of Ukrainians and even Russians mean nothing for the Putin’s regime – just recall explosions of the houses in Volgodonsk arranged by the FSB and the failed operation “Ryazan drills”, aka “Ryazan sugar”.

Material prepared for publication by Kuzma Tutov and Michael Kuznetsov.

(CC BY) nformation specially prepared for InformNapalm.org site, an active link to the authors and our project is obligatory for any reprint or further use of the material.

No Responses to “Yasynuvata at Gunpoint of Russian Hybrid Aggression”