Zapad-2021 Exercise — One Step from Declared Defense to Active Assault 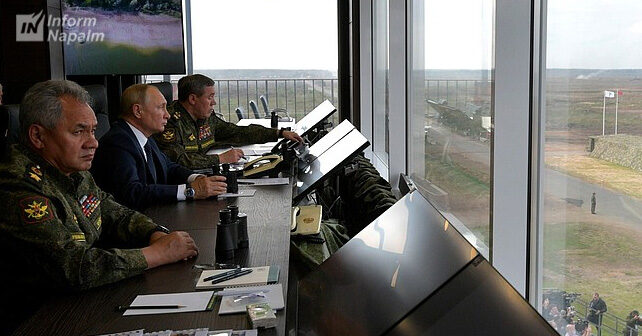 In this publication, volunteers of InformNapalm volunteer intelligence community, analyze Zapad-2021 military exercise to demonstrate why it is not a classic defensive exercise as Russia’s propagandists are trying to make believe.

Authors are trying to persuade the readers that the large-scale military exercise of Russia and Belarus is purely defensive and that all criticism from defense ministries of Lithuania, Latvia, Poland, and Ukraine is ostensibly unfounded. In their conclusions, Russian experts made a separate mention of the statement by Volodymyr Zelensky, the President of Ukraine, made at the international YES Brainstorming forum, on the backdrop of yet another large-scale Russian army exercise on training ranges along the Ukrainian border, that he did not rule out a large-scale Russian invasion.

Strangely, the Russian experts and politicians have been threatening Kyiv incessantly on Russia’s federal TV channels for more than seven years; however, the same politicians and experts keep putting on a show as if Russia does not wage a war against Ukraine even called out on the ample evidence of Russia’s hybrid aggression.

However, even putting aside numerous OSINT investigations providing photographic and video evidence of Russia’s regular forces taking active part in combat in Ukraine’s east in 2014-2021, one cannot be in denial about the fact of Russia’s special operation undertaken in March 2014 to grab Crimea and occupy this part of the Ukrainian sovereign territory. And then a conflict was unleashed in the east of Ukraine to deflect the attention of the international community from the Crimean question. This hybrid aggression is ongoing. At the same time, Russian large-scale military exercises take place every year not only in training ranges deep in Russia’s heartland. They are synchronized with the exercises taking place in occupied Crimea and Donetsk and Luhansk People’s Republics controlled by the Russian occupation forces.

According to the legend, the Russian task force purports to repel the opposition’s attack and mount an immediate counterattack. However, all this “counterattack” business is nothing more than a smokescreen, as at the core of this military exercise is an overall offensive operation=, including landings behind the opposing force’s lines, defeating the opposing force with powerful Tornado and Smerch MLRS, area cleanup using Solntsepyok TOS-1A heavy flamethrower, deployment of Orlan-10 UAVs for artillery spotting, and making use of T-72B3 and T-90A main battle tanks for the rapid advance.

Russia has actively deployed these types of weapons and equipment in its hybrid war against Ukraine. For example, they used the MLRS to shell not only the Ukrainian troops but also the residential areas of Kramatorsk and Mariupol. 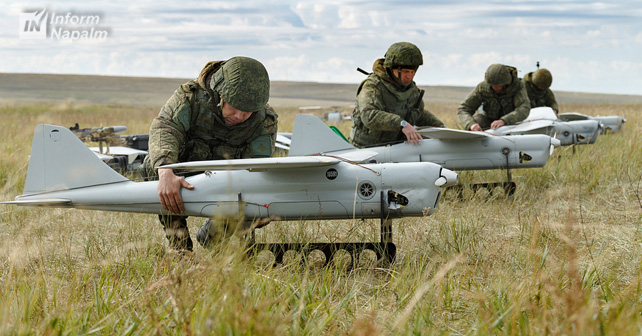 On September 13, the press office of Russia’s Ministry of Defense announced that the newest Russian Inokhodets and Lastochka scout and strike UAVs had been used for the first time in the course of the Zapad-2021 exercise in Mulino training grounds.

Russia’s President Vladimir Putin came to inspect this equipment together with the minister of defense Sergey Shoygu and the chief of the general staff Valery Gerasimov. 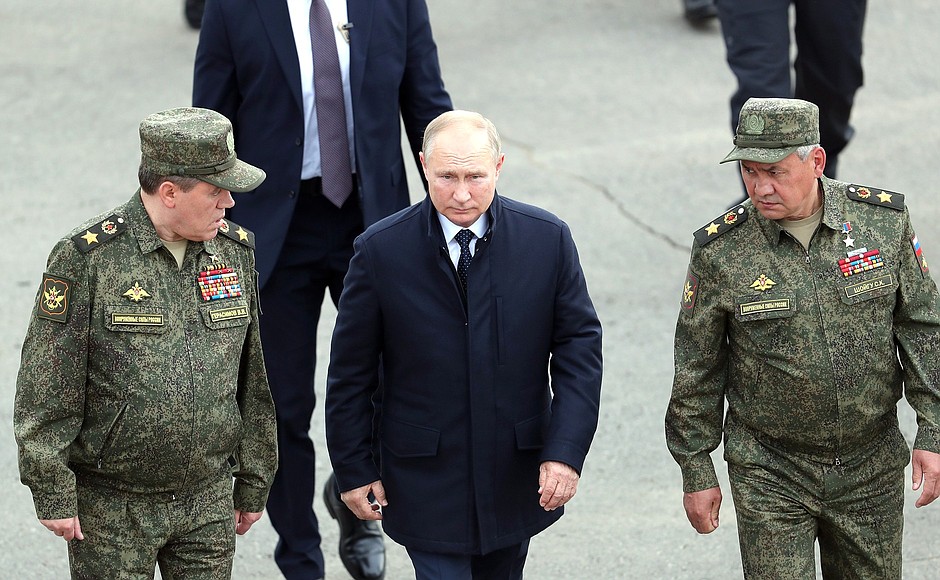 Forpost and Orlan-10 UAVs that had been spotted many times in the combat zone in Ukraine’s east were used in the course of the exercise in Mulino as well. As of 2021, facts have been established of the deployment in the Donbas of over eight types of different types of Russian military UAVs, in particular Granat-1, Granat-2, Granat-4, Forpost, Orlan-10, Eleron -3SV, Takhion and Zastava.

Russia’s focus on strike UAV’s this year is hardly surprising; Russian generals are quite open about using the Zapad-2021 exercise to train the elements of the combat experience received in Syria and Nagorno-Karabakh. Thus, it can’t be ruled out that the Russian strike UAVs will be deployed in the east of Ukraine as well.

Summing up the above, one can assume that Russia is putting on another act. It speaks about defense, but its actions speak loudly about preparations for an offensive war. Currently, Russia relies on its hybrid “death by a thousand cuts” tactics while using Ukraine’s east as grounds for training its troops and testing modern military equipment.

Having analyzed the Nagorno-Karabakh war, Russia realized that strike-capable UAVs could play a major role in offensive operations. Ukraine should also take heed of this realization because the strike UAVs used by the Ukrainian Army and other modern equipment, especially missiles, are a much better deterrent against the aggressor than the “grave concern.”