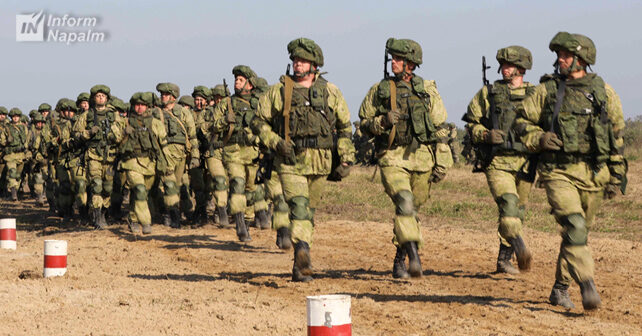 The active phase of the large-scale military maneuvers Zapad-2021 began on September 10 on Russian and Belarusian military training ranges. It was officially announced that the exercises would take place on 14 military training ranges (nine Russian and five Belarusian) as well as in the Baltic Sea. The exercises involve 200,000 soldiers, approximately 760 pieces of military hardware, 80 aircraft and 15 ships.

The previous exercises of the Zapad series were held in 2017. In the years to come, the Russian Armed Forces carried out further strategic exercises such as Vostok-2018, Center-2019 and Caucasus-2020 in other Russian regions.  In 2021, the main direction of the military power demonstration was again shifted to the West.

This year’s  Zapad-2021 maneuvers are also special because they are taking place against the backdrop of the deteriorating political situation in Belarus itself and constant hybrid provocations of Belarusian border guards on the border with Lithuania.

In the spring of 2021, the world watched large-scale redeployments of Russian military equipment to the Ukrainian borders and spoke again about the dangers of a full or partially hybrid invasion. A possible invasion would not only affect the two eastern regions of Ukraine, where Russia has been waging a hybrid war since April 2014 under the guise of the Moscow-controlled formations Donetsk People’s Republic (DPR) and Luhansk People’s Republic (LPR), but also in other areas, including southern or northern Ukraine. Possible challenges of Zapad-2021 apply not only to Ukraine, but also to the entire security system in the NATO countries.

Read more: Formation of new Russian division near the borders of Lithuania moves ahead of schedule

The beginning of maneuvers and their danger factors

On September 8, 2021, the press service of the Belarusian Defense Ministry announced that Russian Su-30SM-PKS fighters had landed at Baranavichi airfield to be part of a training and combat center for the joint training of the Belarusian and Russian Air Force and Air Defense Forces. 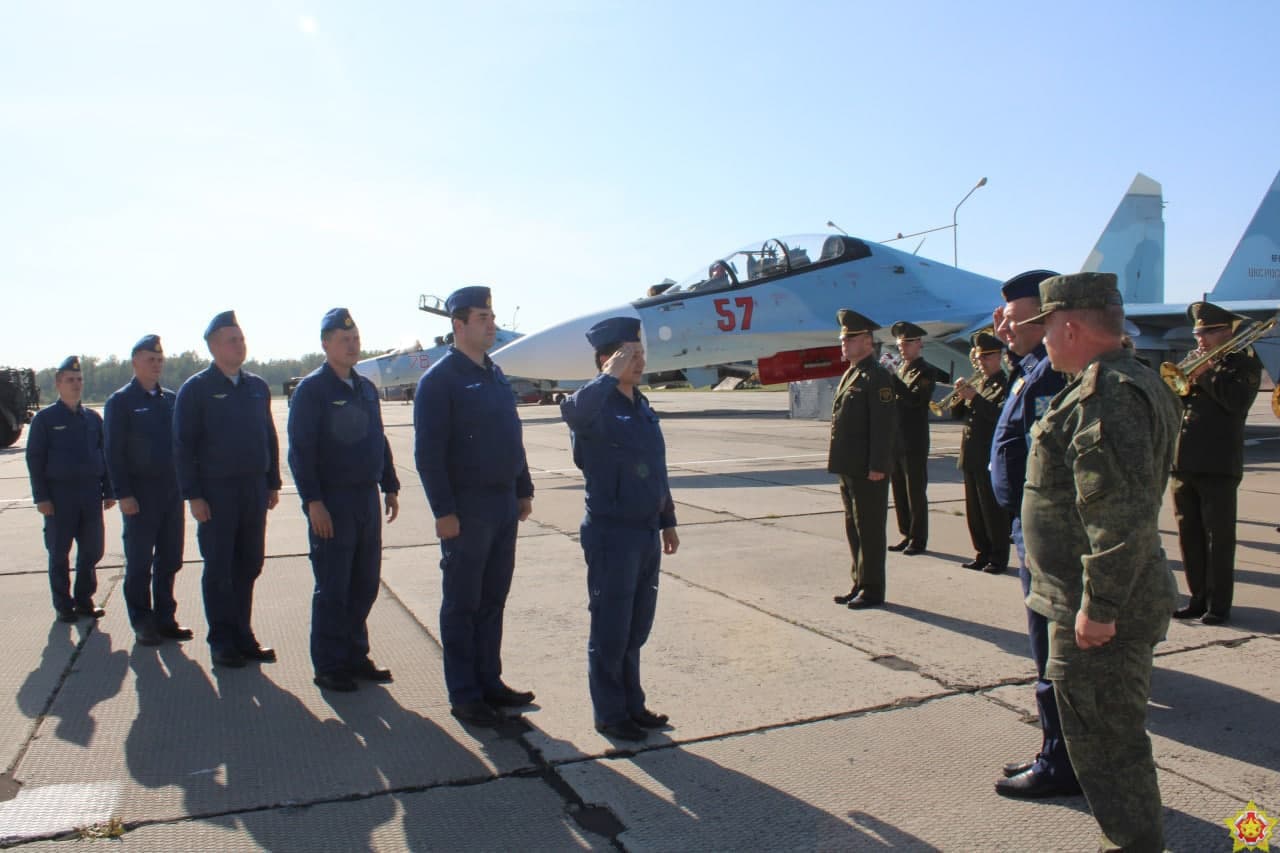 A photo from the official YouTube channel of the Belarusian Defense Ministry dated September 8, 2021.

In 2015, the InformNapalm Volunteer Intelligence Community drew attention to the risk factors connected to the preparation of a  bridgehead for the Russian Air Force in Belarus. In 2016, the development of this bridgehead was suspended, but it resumed on March 5, 2021. During a meeting in Moscow, the Belarusian Defense Minister, Lieutenant General Viktar Khrenin and the Russian Defense Minister Sergey Shoigu discussed the implementation of the Belarusian Strategic Partnership Program for 2021-2025 and agreed the formation of three joint training and combat centers.

A video from the official YouTube channel of the Russian Defense Ministry dated September 8, 2021. The location is not specified, but the video shows the same tail number on the plane as in the news story of the Belarusian Ministry of Defense of September 8 about the redeployment of the fighters.

Note from InformNapalm: The multirole fighter Su-30SM with tail number 57 (red), registration number RF-81768 was put into service with the 14th Fighter Aviation Regiment in 2018, permanent deployment at Kursk. The airplane was relocated on September 8, 2021 and put on combat duty on September 10 at the 61st Air Force Base in Baranavichi, Belarus.

Read more: Non-combat losses of Russian military aviation in the summer of 2021. (Infographics)

The Republic of Belarus

On June 28, 2021, the Belarusian edition of InformNapalm published its own OSINT investigation which, according to an analysis of planned government acquisitions for the transport of military cargo from Russia, found that the Zapad-2021 maneuvers would cover almost the entire territory of Belarus.

On September 10, the Belarusian Defense Ministry officially announced that the following training areas will be used to carry out the maneuvers on its territory: the 230th Combined Arms Range Abuz-Liasnouski, the 174th Voznesenski Air Force and Air Defense Training Range Damanauski and the 210th Ruzhanski Air Range Brestski. 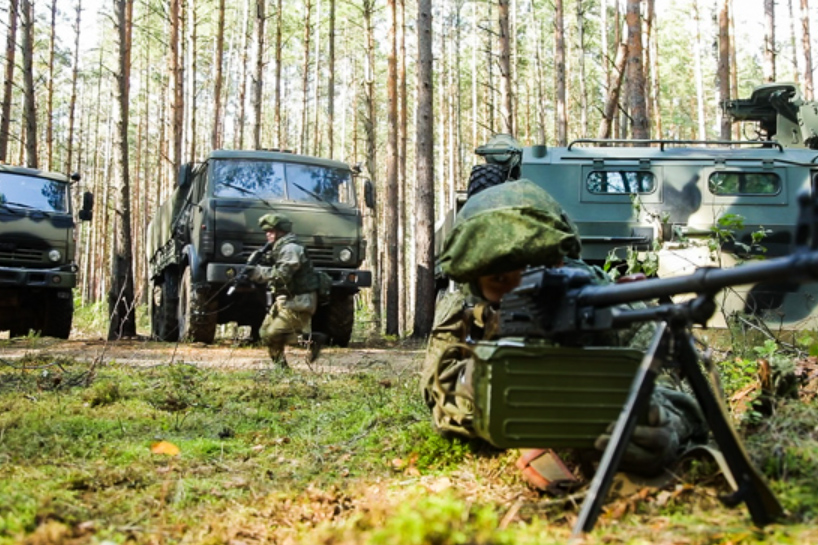 On September 10, 2021, the personnel of the 76th Air Assault Division (AAD) of the Russian Armed Forces (military unit 07264), which is participating in the Zapad-2021 maneuvers, was redeployed to the 230th Combined Arms Range Abuz-Liasnouski.

InformNapalm’s OSINT database contains numerous data with evidence of the participation of soldiers from the Russian 76th AAD in the war against Georgia, the invasion of Crimea and the war in eastern Ukraine. It was also established that paratroopers from the 104th Air Assault Regiment of Russia’s 76th AAD in 2014 participated in the seizure of drilling rigs belonging to the Ukrainian enterprise Chornomornaftogaz. InformNapalm’s volunteers have also gathered information about the commanders of the 76th AAD who were awarded to take part in the war against Ukraine and Georgia.

The active phase of the Zapad-2021 military exercises has only just begun. The hidden threats and challenges of the exercises must now be taken into account as they are risk factors for sustained hybrid aggression against both Ukraine and NATO countries.

There is a component of the exercises that is not part of the surface component, but lies within the information sphere. For example, from September 7 to 9, InformNapalm’s volunteers witnessed the unfolding of a typical Russian disinformation PSYOP  against Ukraine. This disinformation campaign was concentrated in the southerly direction. Media campaigns against the background of the “migration crisis” artificially created by Belarus along the Lithuanian border were also observed the day before.

The information component therefore also plays an important role in these maneuvers. Military aggression in modern hybrid wars and conflicts waged by Russia in different parts of the world is just a continuation of its influence operations. First, Russian PSYOPS units create favorable conditions for the tasks, and only after that, follow the mercenaries or soldiers wearing no insignia, but operating the latest Russian technology. Therefore, it is important to monitor not only the movements of the Russian troops, but also outbreaks of information attacks in the media and in cyberspace.

Russia’s military and political takeover of Belarus against the background of the political crisis in it is intensifying and accelerating under the guise of these large-scale military maneuvers as well. In Belarus, an aviation bridgehead for the Russian Armed Forces is being deployed, and the same Russian units, which were actively involved in the operation to seize Crimea and in the hybrid aggression against Ukraine, are now conducting reconnaissance and training.

By Roman Burko specially for InformNapalm. Translated by A55, edited by Artem Velichko. Distribution and reprint with reference to the source is welcome! (Creative Commons — Attribution 4.0 International — CC BY 4.0) InformNapalm social media pages: