The difference between a Russian invasion and an internal Ukrainian conflict 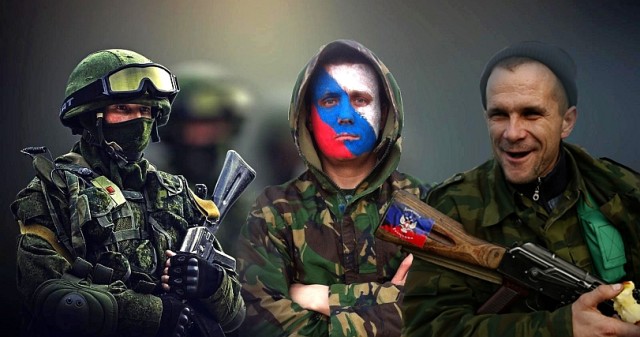 Since the beginning of the war in Ukraine, Russian media and proponents have attempted to argue that the dispute is only about a civil war in which Russia has no influence.

At the same time, according to Western media, Russia is supporting the so-called pro-Russian separatists with a huge amount of assistance. Russia also uses special forces and regular government troops. This contradicts Moscow’s claims for the crisis to be a civil war and that Russia has no hands in the game. This is completely understandable, because the conflict is designed to look like a civil war, where Moscow is given the opportunity to deny any involvement except for that, only volunteers “on leave or holiday” have chosen to do fight with the pro-Russian separatists in Donbass. However, there is increasing evidence that this conflict is not an internal Ukrainian dispute.

Russian invasion in Donbass since August 2014

Since the protests against the deposed government in the capital Kiev, pro-Russian media created a progressive propaganda to discredit the current government as Western-funded. They also exaggerate the existence and function of the extreme right wing. Moscow will gladly tell you about Ukrainian fascists, fascist attacks, as well as focusing on the new authorities’ so called mistakes. Moscow also argues that the language issue is one of the reasons of the protests in Donbass. Russian media has misused the tragedy in Odessa, and the fighting around the Ukrainian city of Mariupol. Many civilians in occupied Donbass lost their lives thanks to the separatists use of civilians as human shields. This has mobilized a lot of volunteers from the rest of Donbass and Russia to fight with the pro-Russian forces. It could be so, that the conflict would not even have started, unless Russian state media would not have triggered the situation.

The pro-Russian riots in the city of Kharkiv, where protesters took over the regional administrative building is nothing, in comparison to what later came to happen in the city of Donetsk. The different thing that happened in Donetsk was that masked people from Russia began attacking police stations in order to seize weapons.Igor Girkin, the former “defence minister” of the self-proclaimed People’s Republic of Donetsk admitted in an interview (in November 2014) that it was him who started the war in Donbass by creating a military unit made ​​up of both Russian volunteers and volunteers from occupied Crimea.

How pro-Russian separatists in Novorossiya ceased to be useful

The real founders of the “People’s Republic of Donetsk” were two citizens from Russia. One of them was Colonel Igor Girkin and the other one Alexander Borodai. These two gentlemen have a common denominator, as they always have spoken for Russian expansion and revanchism for the loss of the cold war, even if this was far from the Russian official line. They are both linked to the Russian-Orthodox oligarch Konstantin Malofeev who is dreaming of a contemporary Russian empire. It must be said that Girkin and Borodai were both “kindly forced” to leave Donbass according to Moscow’s directives, since Kremlin now took over the entire control of the territory.

Shortly thereafter, the Ukrainian Zakharchenko was added as “Prime Minister” of the “People’s Republic of Donetsk”. Today, many of the other leaders of “Novorossiya” (Donetsk and Luhansk Oblasts), have entered from Russia.

In this period, the war would have been considered to be a civil war, if it were not for the constant flow of arms across the Russian-Ukrainian border. By June 2014, “humanitarian aid” also began to flow into the area from Russia, as the pro-Russian separatists have taken control over most of the crossing points to Russia. In fact, the drivers of the aid convoys are Russian soldiers from, among others, the 69th brigade who are dressed like EMERCOM employees. Despite the fact that NATO and Ukraine have verified that arms deliveries are made, large amounts of evidence have not been presented. This is not surprising as the OSCE is refused access to most of the border crossings in the occupied territories.

The BUKs and Malaysian Airlines MH17

The best known case is the anti-aircraft system BUK, which is suspected to have caused the disaster with Malaysian Airlines MH17. Many of the vehicles that have been observed by people in Donbass are Russian-made, not in use within the Ukrainian armed forces. Despite this, there are now compelling evidence that the vehicles with the BUK system were observed in Russia, shortly after they were seen in the Donbass after the shot-down of MH17.

Bombardment of Ukrainian territory from Russia

The first sign of Russian involvement in Ukraine started in July 2014, when Russian artillery opened fire against almost surrounded Ukrainian soldiers who tried to secure the Ukrainian border (troops from the Russian 6th armoured brigade). These attacks have, of course, been documented. The artillery attacks led to severe setbacks for the Ukrainian troops who finally made a move westward. In 2014, Russian regular troops were observed not only in Crimea, but also on the Ukrainian mainland.

The most famous event is when separatist held positions almost were defeated during a Ukrainian offensive in August 2014. Then, Russia sent its regular troops into Donbass which resulted in the bloody battle of Ilovaisk. Hundreds of soldiers from both sides were killed.Another example of Russian regular forces of Ukraine tanks from Eastern Siberia (8th rifle brigade) that crossed the border with in order fight in Debaltseve.

Russian citizens are trained and sent to Ukraine

People of the Donetsk and Luhansk armed forces mostly consist of Russian citizens who are recruited and trained in Russia. The number of local volunteer separatists is low, but it is not known how many rebels are Ukrainian citizens. Russia speaks of an internal Ukrainian conflict but the hypothesis does not hold. The conflict in Ukraine began with Russian propaganda. Russia has continuously supplied the separatists with weapons, arms, rocket systems, artillery units, regular troops, and mercenaries.

CC BY 4.0 – Original article by InformNapalm.