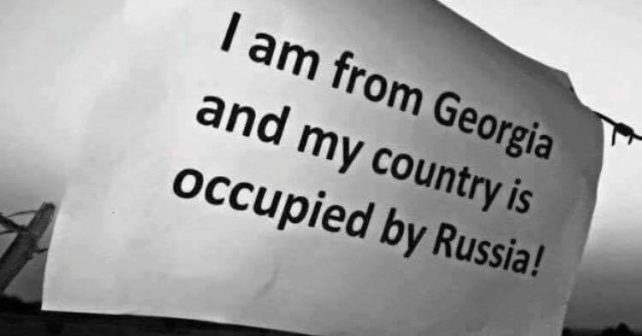 August 8 marks the ninth anniversary of the Russian military invasion into Georgia, which many call a five-day war. This was the first overt military aggression in a series of subsequent predatory wars of Putin’s Russia. The world community failed to timely and adequately respond. Emboldened by expressions of concern paired with actual inaction, the Kremlin embarked on new aggressive actions: annexation of Crimea, unleashing of war in the east of Ukraine, armed support to the criminal regime of Assad in Syria.

Despite the ceasefire, the war in Georgia is not over, it has only changed its shape. To date, over 20% of the territory of Georgia is under control of the Russian occupants, and this figure is growing every day, as Russia, in violation of all treaties and international law, continues the policy of creeping occupation, kidnaps and kills civilians.

On the eve of the ninth anniversary of the Russian aggression against Georgia, InformNapalm volunteer intelligence community decided to revisit the subject. The chronology of those not-so-distant events is very well reflected in the feature of the famous Georgian blogger Giorgi Cyxymu Jakhaia  – Beginning of Russian military aggression against Georgia in August 2008.

Among the materials on Georgia, published on the InformNapalm website, it is necessary to highlight both our own materials and the research of damoukidebloba project, as well as the data from other sources that defeat the Russian propaganda:

In addition to this, InformNapalm conducted a number of its own OSINT investigations to identify Russian servicemen who participated in the Russian aggression against Georgia in August 2008 and who were involved in war crimes and ethnic cleansing. These are some of them:

We should also mention the InformNapalm publications, which demonstrate the cynicism and vileness of Russian invaders who share photos posing in front of the villages they destroyed and reveal the incidents of vandalism and war crimes:

The atmosphere and emotions of those August days of 2008 are most realistically shown in the Russian documentary by Andrei Nekrasov Russian Lessons.

Translated by Artem Velichko
An active link to the authors and our project is obligatory for any reprint or further public use of the material.
(Creative Commons — Attribution 4.0 International — CC BY 4.0)
Repost and share with friends.
For notifications about InformNapalm investigations follow us on Facebook / Twitter / Telegram.

No Responses to “08/08/08 – The 9th anniversary of the Russian invasion of Georgia. We remember!”