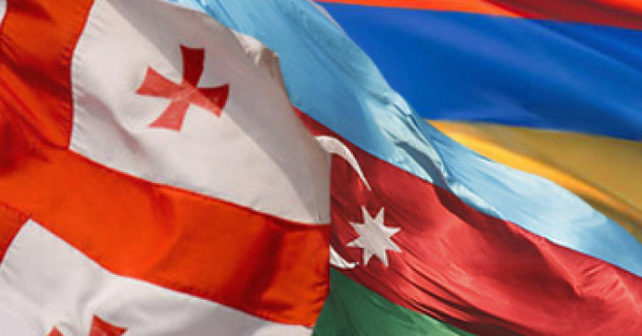 This article discusses the attempts by Armenia and Azerbaijan to use media manipulation in order to pull Georgia into their military conflict. False news, viral posts, radical statements and insinuations coming from both countries and their leaders, are analyzed for the readers of Informnapalm by the Georgian politologist Andro Dzhashi.

False news and manipulations by Armenia

“Why is Georgia maintaining strict neutrality? Why are Georgians looking calmly at Azerbaijanis and Turks killing their Armenian brothers in faith? Why are Georgians staying silent, not protesting the use of the Georgian airspace for the transfer of military cargo and mercenaries, which are transported from Turkey and Israel under the cover of civilian cargo?”  –  These are just some of the questions being asked by the Armenian society (and in some cases by officials too) since the end of September, against the background of the large-scale combat activities between Armenia and Azerbaijan over Nagorno-Karabakh. The main reason for such questions is common: Georgia borders both sides of the conflict. However, the reasons for the existence of such admonitions and complaints are quite complex and even difficult, requiring a more detailed analysis. 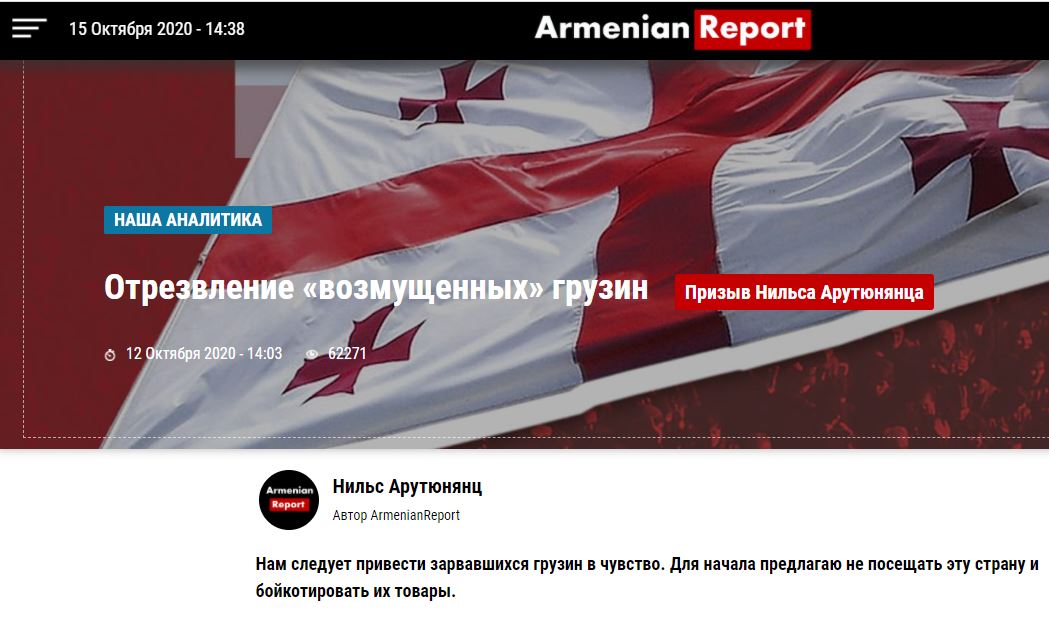 To begin with, it should be noted that both Armenian and Azerbaijani sources are constantly spreading false information regarding the position of Georgia in this military conflict. With the beginning of large-scale hostilities, a kind of virtual information warfare front line was created around Georgia. The most widespread information on this frontline are data and screenshots of Flightradar24, on the basis of which authors of various posts and comments speak about Georgia siding with Azerbaijan by allowing the transit of military cargo from Turkey and Israel through its territory. Notably, a number of pro-Armenian social networks users, including the Armenians living in Georgia, become victims of this kind of disinformation, which in itself contributes to the growth of anti-Georgian sentiments. One evidence of that are the protests of ethnic Armenians living in Samtskhe-Javakheti region of Georgia. The participants of demonstrations openly stated that the information about Georgia allowing transit of military cargo for Armenia through its territory they found on social networks. 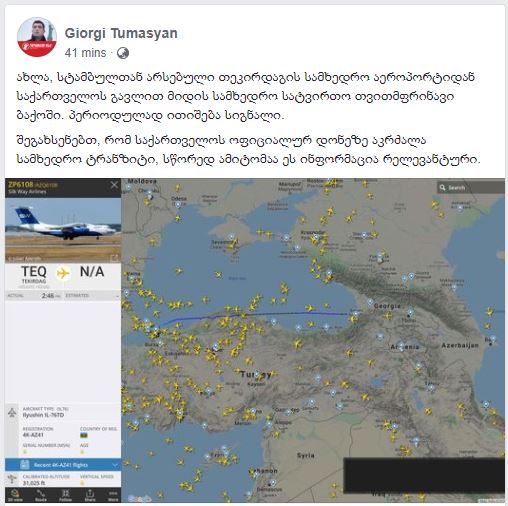 Based on social networks posts and comments, Armenians demand an “equal” treatment, that is, the creation of a kind of a corridor for the supply of weapons from Russia, ignoring the fact that since the beginning of the conflict, Georgia has banned the transit of any kind of military cargo through its territory. However, Armenian sources simply stay silent about this statement of the Georgian government.

The objections coming from Armenia are now being voiced at the highest state levels. For example, the Armenian Prime Minister Nikol Pashinyan shared pictures of solidarity demonstrations organized by Armenian diaspora around the world. For all locations mentioned in the photos, their official, international names are used, with the notable exception of Samtskhe-Javakheti (the area of Georgia populated by Armenians), which is presented with its Armenian version, “Javakh”.

For Armenian nationalists, “Javakh” is an Armenian territory that should be returned to Armenia. At the same time, despite the fact that the official Yerevan has never expressed such a position, a certain and growing segment of the Armenian society welcomes this idea, which can be seen in the growing number of posts and comments on social media and open sources. For example, many Facebook users are aware of the statement by Karen Okhanjanian, who made a provocative call to declare the independence of “Javakh”. This hysteria reached its climax with the statement of the Vice-Speaker of the Armenian Parliament Lena Nazaryan who said that the independence of Georgia is protected by Armenian soldiers in Artsakh, thereby saying that Georgia should support Armenia. 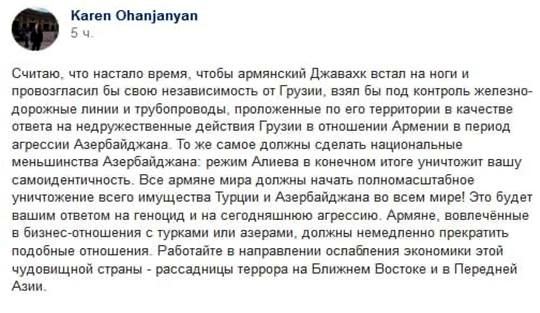 In parallel with the Armenian claims against Georgia, the Azerbaijani side is also quite active. Unlike Armenian sources, it spreads “positive” disinformation about Georgia. One of the examples is a post of gratitude to Georgia for allowing the transit of military cargo from Turkey to Azerbaijan through its territory. Old footage that has nothing to do with the current events is presented as evidenc. Despite an immediate refutation of it by the Georgian government as well as by the Embassy of Armenia in Georgia, Armenian and pro-Armenian sources spread it as news all over social networks and beyond.  And there were other fakes, for example, “In support of Azerbaijan, Tbilisi TV tower and the Peace Bridge were lit in the colors of the Azerbaijani flag”, which was initially published by the Oxu.az news agency.  It was yet another disservice done by Azerbaijan to Georgia that further worsened the situation by going viral in both Azerbaijani and Armenian social networks and media. 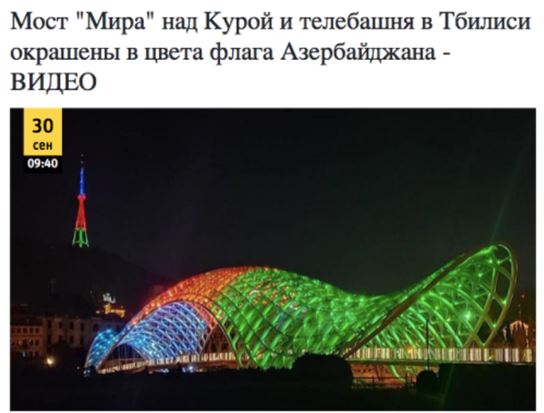 The origins of the information war and the answers to the questions presented at the very beginning of this article can be found in the territorial problems and conflicts of the South Caucasian states. Add to this the ambitions of Russia in the Transcaucasia, as well as the geopolitical position of Georgia, whose territory is actively used by a number of states in their interests, most of all by Azerbaijan and Armenia. All these point to the economic interdependence of the neighboring countries.

In addition, it should be also noted that:

– Taking into account the membership of Armenia in the “CSTO”, the shortest and in fact the only route from Russia to Armenia passes through the territory of Georgia, which has been affected by the Russian aggression (Russia occupies more than 20% of the territory of Georgia). Consequently, even the slightest military involvement of Russia in the Armenian-Azerbaijani conflict will further jeopardize the territorial sovereignty of Georgia;

– Given the fact that Georgia is a home for quite large diasporas of Armenians and Azerbaijanis, there is an increasing possibility that representatives of these national and ethnic minorities, upset by disinformation and trolling of their compatriots, can cause violence and produce new spots of inter-ethnic conflict;

– The oil and gas pipelines passing through the territory of Georgia, and thus, the energy security of the country, were also under threat;

– at the same time, due to the escalation and lengthening of the military conflict, the likelihood of a large flow of refugees from the conflict zones is growing. It should be noted that Georgia is already facing a refugee problem – as a result of the Russian occupation a number of people have been displaced from Abkhazia and Tskhinvali region.

In conclusion, it should be mentioned that the Armenians, including those living in Georgia, are more and more often reminding Georgians and Georgia in general about the support they expressed and showed during the Russian military aggression in 2008. Although, in reality, the relations between Armenia and Georgia include a number of “awkward moments”, which Armenian sources try not to recall. For example, several representatives of the authorities and opposition of Armenia (Levon Ter-Petrosyan, Serzh Sargsyan, Tigran Sagrsyan among others) have repeatedly mentioned Georgia as an aggressor in the 2008 war, expressed support for Russia and the so-called South Ossetia. In addition, Georgia remembers the unfriendly steps of Armenia and its refusal to support the adoption of the UN resolution regarding the return of Georgian refugees.  Also, the tendency of rapprochement of NKR and the separatist and now occupied regions of Georgia – Abkhazia and the so-called South Ossetia. And of course, the factor of the 102nd Russian military base located in Armenia, the personnel and equipment of which were alerted in August 2008 and became the strike force for the invasion of Georgia from Armenia; moreover, the aircraft of the 426th air group from Erebuni, repeatedly violated the airspace of Georgia, which the Armenian side did not prevent at all. To sum up, all this directly contradicts the most important national interest of Georgia – territorial integrity, which is under constant threat due to the Russian factor.

To summarize, we can say that any hotbed of tensions and hostilities and especially an armed conflict in the South Caucasus region, poses a potential threat to the security and stability of Georgia. Hence, the conflict in Nagorno-Karabakh, which has already taken the form of an Azerbaijani-Armenian war, places Georgia in front of new challenges and poses an immediate threat to its free and democratic future.

Specially for informnapalm by Андро Джаши (Andro Jashi). Tbilisi, Georgia. Distribution and reprint with reference to the source is welcome! (Creative Commons — Attribution 4.0 International — CC BY 4.0).