UCAS informed Georgia and Kazakhstan on a Russian war criminal 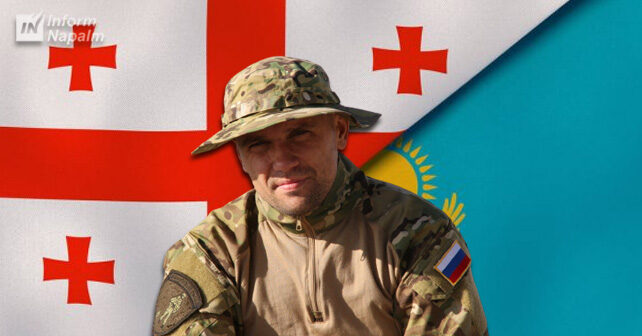 For the readers of the InformNapalm international intelligence community we publish up-to-date information from experts of the Ukrainian Center for Analytics and Security (UCAS) about the subject of InformNapalm OSINT investigations, a soldier of the 3rd Brigade of the Main Intelligence Directorate of the General Stagg of the Russian Army (GRU), who fought against Ukraine under the guise of Wagner’s private military company (PMC), changed his last name to get to Georgia. UCAS experts have officially appealed to the Embassies of Georgia and Kazakhstan regarding the stay and activities in the territory of these countries of this Russian war criminal. It has been found that this Russian military man has set up firms in these countries that can serve as a cover for the infiltration of Russian agents. Read more in our material.

The UCAS has officially appealed to the embassies of Georgia and Kazakhstan regarding the presence in their territory of a Russian war criminal who was involved in Russia’s armed aggression against Ukraine. The reason for the appeal was the information collected by the Center during their investigation.

In May 2015, InformNapalm published a report on a former serviceman of the 3rd Special Operations Brigade of the General Staff of the Russian Army – Krivko Kirill Vladimirovich, born on December 12, 1979, and the evidence of his participation in hostilities on the territory of Ukraine. It contained relevant photos that Krivko posted on social media, as well as his video interview immediately after the capture of Luhansk airport by the Russian military on August 31, 2014. 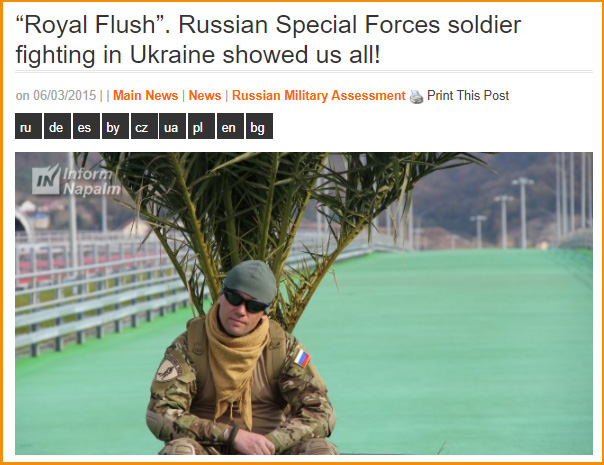 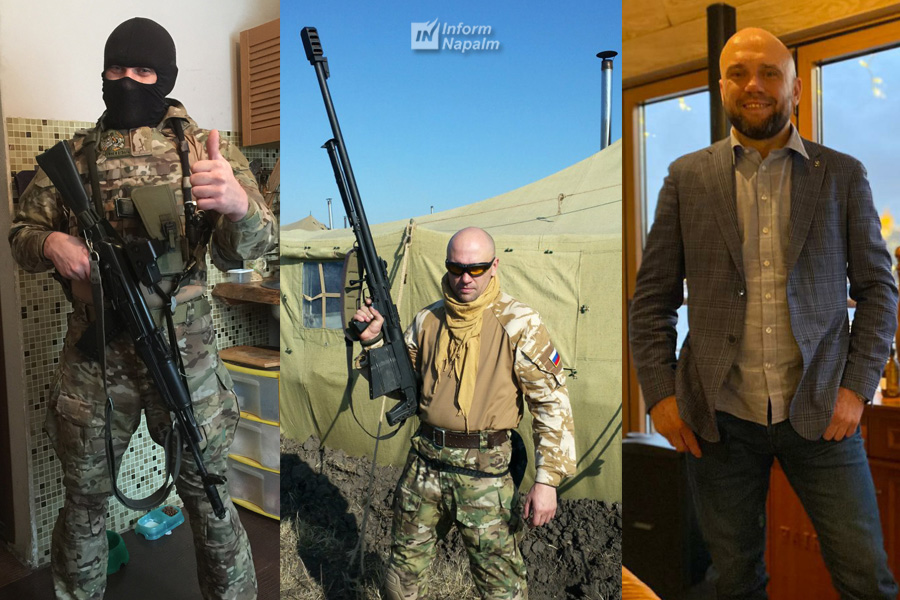 According to experts from the UCAS, Krivko was also personally involved in the killings of civilians in Syria in 2016 and 2017 by an unofficial Russian military intelligence unit, better known as a Wagner PMC. At the same time, he actively commented on his “feats” in correspondence with other mercenaries on his own page on the VK Russian social network. Screenshots of these exchanges are now available on the Myrotvorets Center website.

The public exposure of the Russian war criminal Krivko must have put an end to his career as a member of the Russian military intelligence. However, as UCAS found, his “adventures” in the interests of Russian intelligence services didn’t come to an end. Today he is trying to legalize himself under the guise of a Russian businessman in two countries of the former USSR.

The first step towards this was the change of Krivko’s own surname, which took place no later than October 2017. This is evidenced by the information of open company registers of the Russian Federation in relation to VNS LLC (engaged in retail trade via the Internet), which he registered in 2013 at the home-address of the entire Krivko family in Samara. From now on, a GRU operative and an employee of the Wagner PMC (an unofficial unit of the Russian military intelligence) became Alyoshechkin Kirill Vladimirovich, using the last name of his wife Alyoshechkina A.O., born on March 18, 1980. 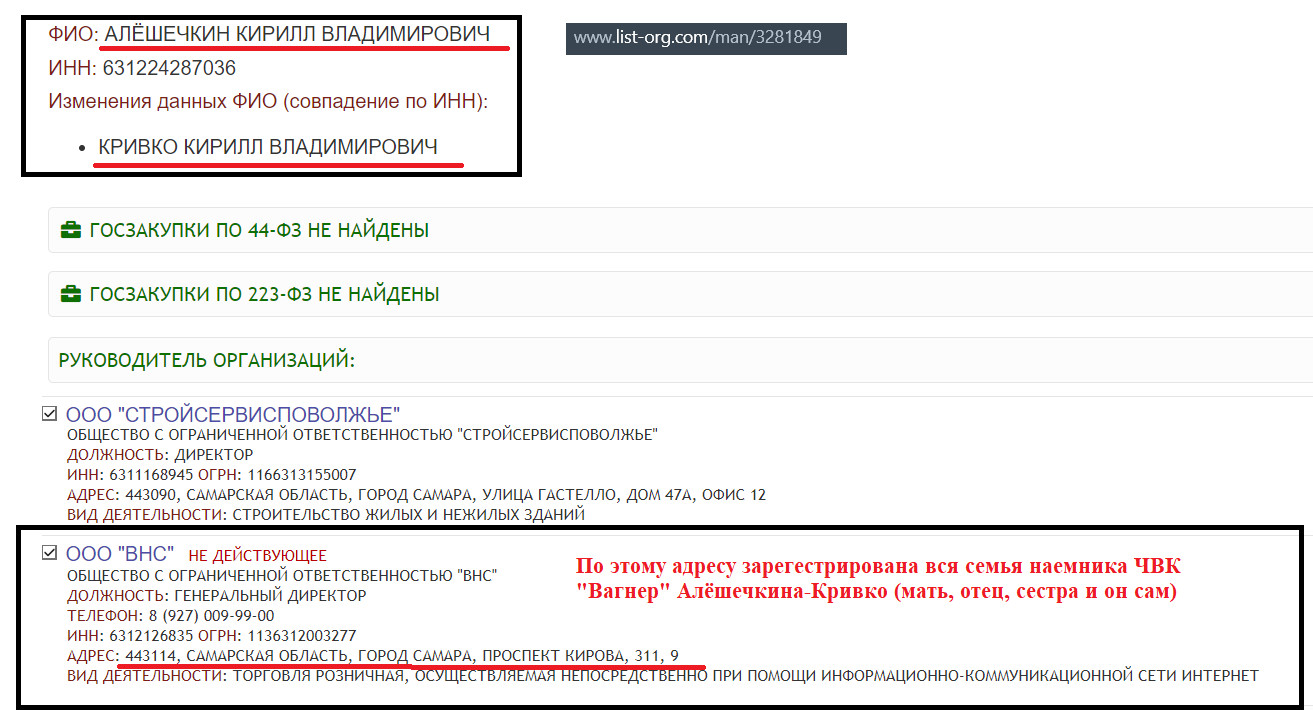 At the end of 2018, Alyoshechkin-Krivko “suddenly” discovered the vocation of a builder, becoming the director of Stroiservispovolzhye LLC (Russian – ООО «Стройсервисповолжье»). However, we managed to find only a few mentions of this company for the last three years on the Internet. All of them are connected with penalties imposed by the Russian prosecutor’s office (in general over 400 thousand rubles) for low quality and delay of repairs of the community center in the village of Klyavlino of the Samara Oblast, and also for corrupt actions of LLC’s head.

But the role of the loser-builder took on a completely different obscure meaning when during 2019-2020 Alyoshechkin-Krivko registered two branches of his company in Georgia and Kazakhstan, posting photos of his travels on social networks. 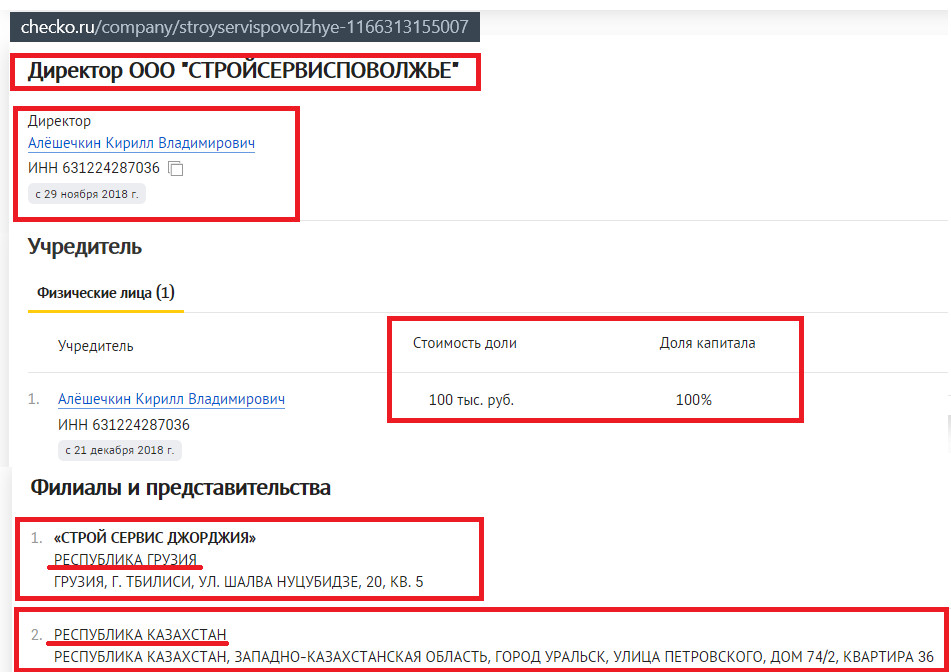 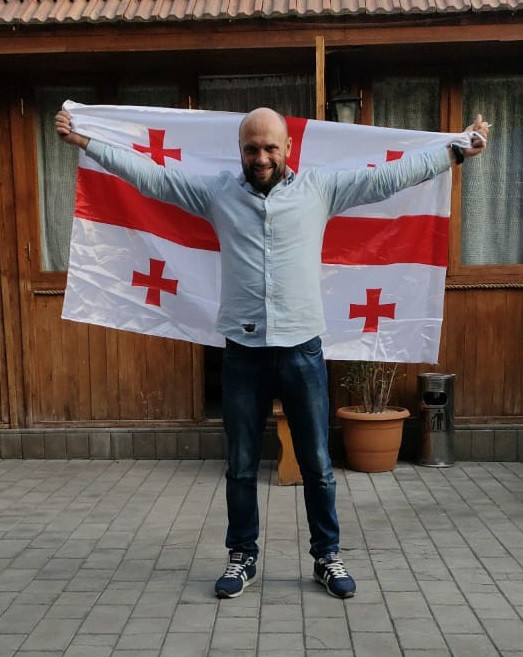 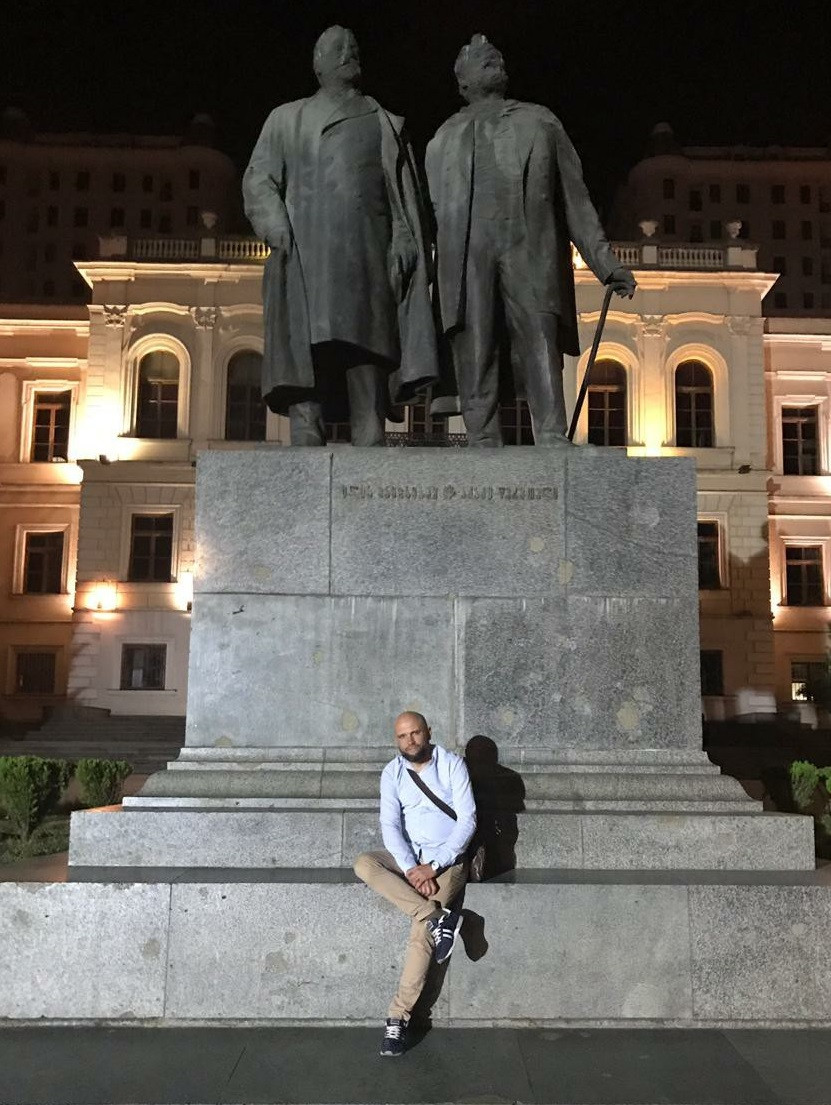 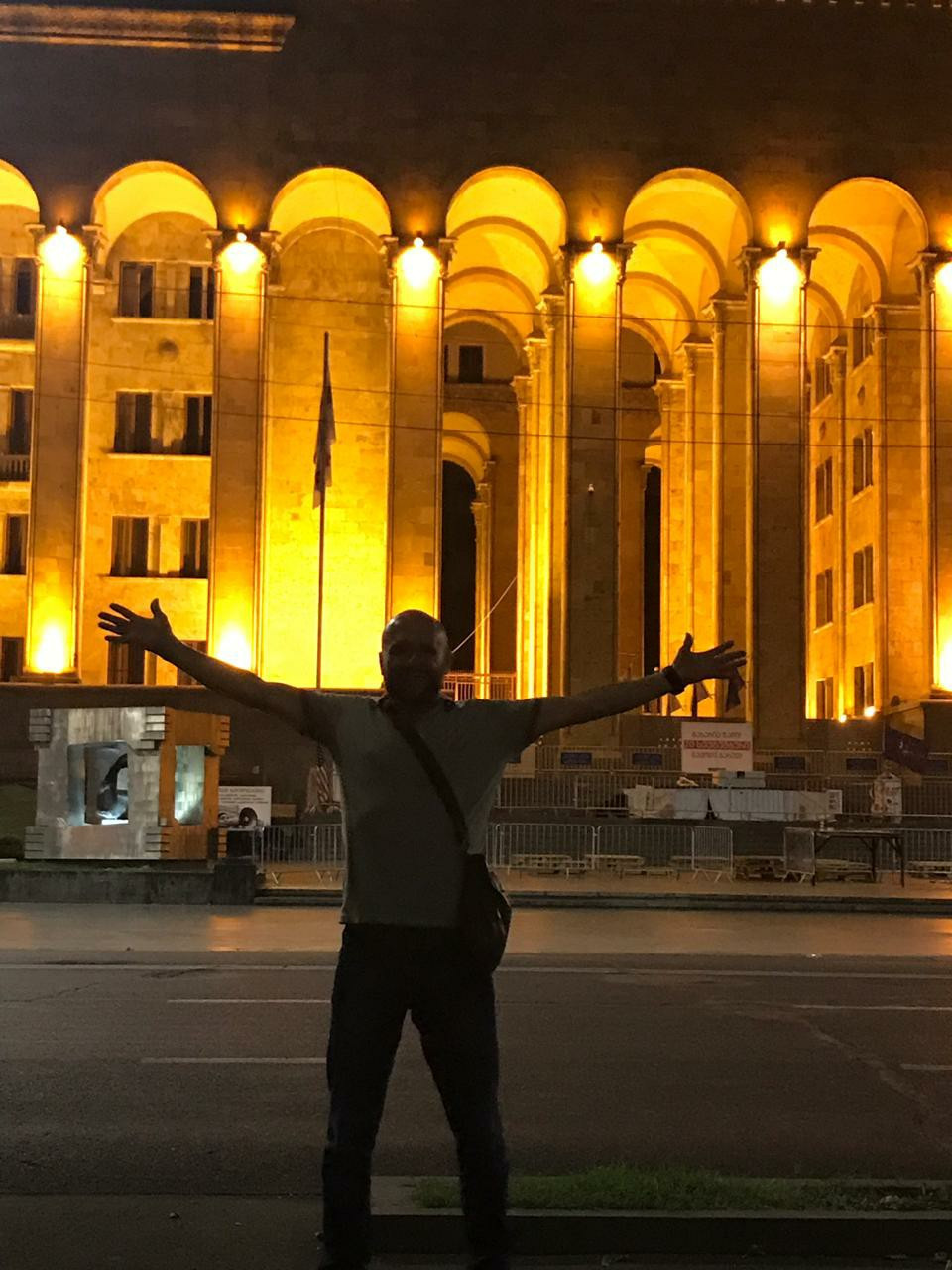 According to the Ukrainian experience of resisting Russian hybrid aggression, such commercial structures were actively created by the Russian secret services in Ukraine until 2014 to infiltrate enemy agents, gather intelligence, and fund local pro-Russian political forces and civic activists. There is no doubt that the branches of Stroiservispovolzhye LLC, a business outfit founded by a career Russian military intelligence officer Alyoshechkin-Krivko should become (or have already become) similar bridgeheads for the GRU on Georgian and Kazakh soil.

That is why the UCAS officially addressed the Embassies of Georgia and Kazakhstan to inform them about the threats to national security of both countries related to the presence in their territories of the Russian war criminal Alyoshechkin-Krivko (copies of letters).

There are some more important aspects which are related to the participant of this investigation.

In August this year, the Georgian embassy officially addressed the Ministry of Foreign Affairs of Ukraine, expressing an outrage in connection with the organization of tours to the occupied territory of Georgia by the Ukrainian Kuluar Pokhod travel company (Ukr. Кулуар поход). The UCAS fully supports the position of Georgian diplomats on this issue, as both countries became objects of Russian intervention, tens of thousands of Georgians and Ukrainians died, millions were forced to leave their homes, and parts of the territory of Georgia and Ukraine are still occupied by the Russian troops. That is why the facts of free movement in Georgia of the war criminal Alyoshechkin-Krivko, whose hands are stained with Ukrainian blood, cause Ukrainian patriots no less surprise and outrage.

We do not rule out that one of the tasks of Alyoshechkin-Krivko is to recruit new mercenaries to Wagner PMC, as we have specific facts about citizens of Kazakhstan serving in this unofficial unit of the GRU. Back in 2018, the Security Service of Ukraine showed a photo of Kazakh passports of the Wagnerians Klimov M.L. and Yelizarov O.V., who took part in hostilities in Ukraine, Syria and were eliminated by an airstrike of the US troops in the Syrian province of Deir ez-Zor in February 2018. Subsequently, Yelizarov’s relatives not only confirmed his death, but also released a video where, along with military awards, Yelizarov’s personal Wagner badge with the number M-2701 is clearly visible. 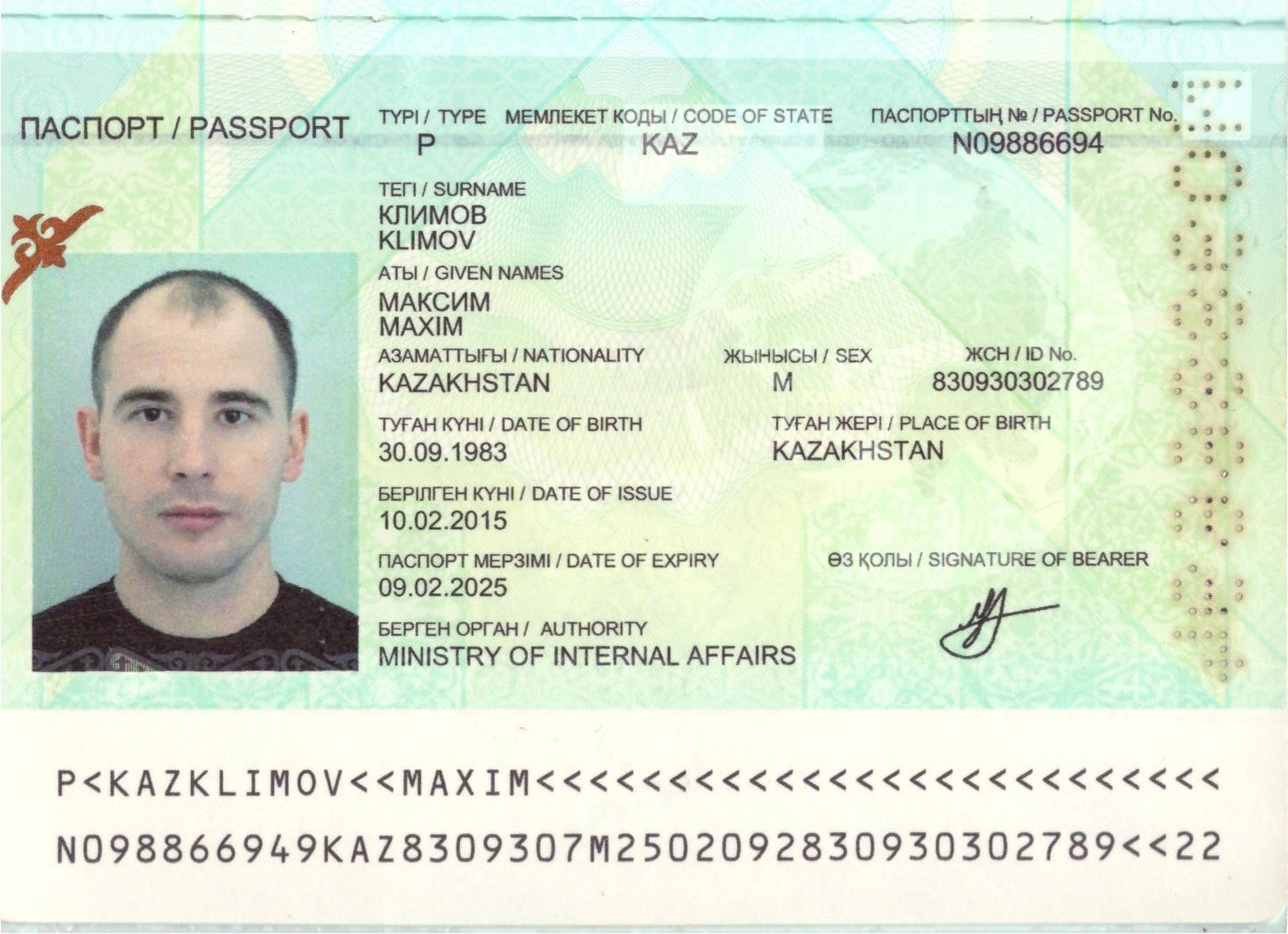 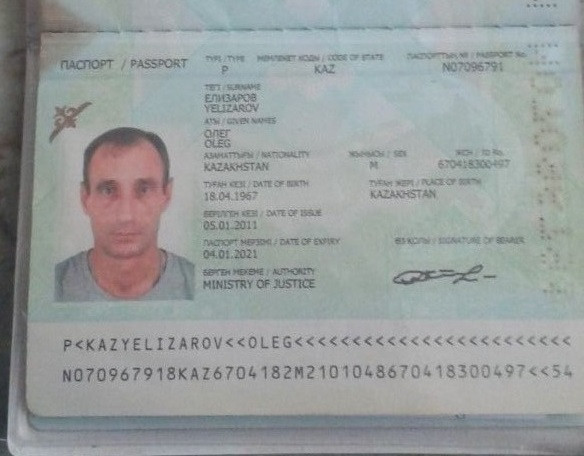 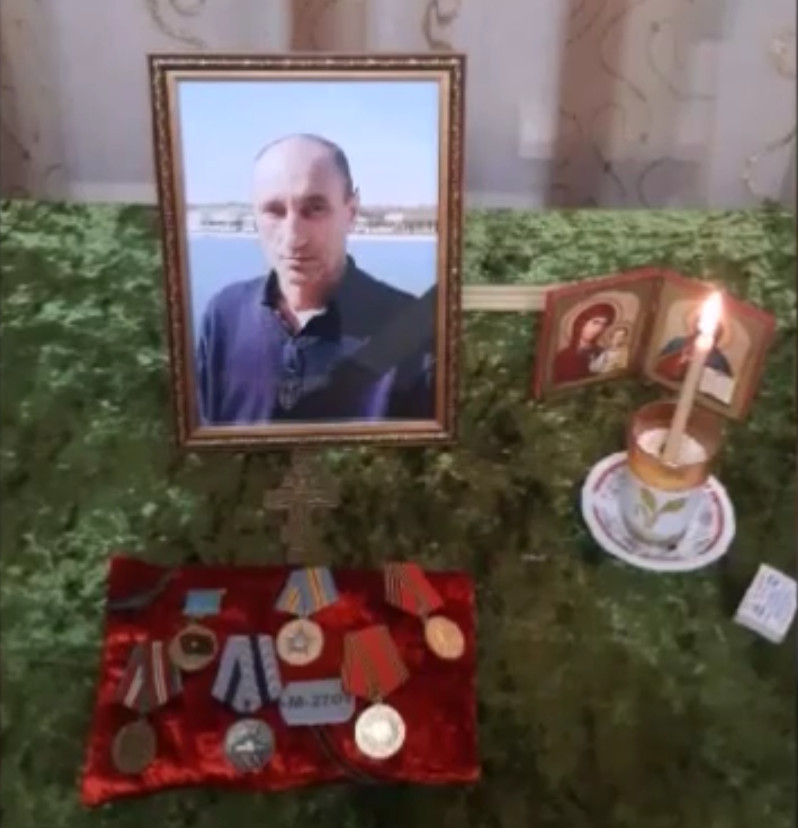 However, the National Security Committee of the Republic of Kazakhstan replied to the request of journalists that “we do not have any information about the involvement of these citizens of Kazakhstan (Yelizarov and Klimov) in terrorist and extremist activities.” Today, the list of identified Wagner fighters from Kazakhstan already includes almost two dozen names.

We hope that the UCAS information on Alyoshechkin-Krivko, which is directly related to this criminal structure of Russian military intelligence, will motivate enforcement agencies of the Republic of Kazakhstan to do a more detailed analysis of practices to recruit mercenaries in their territory to fight in Ukraine, Syria and other countries of the world.

By Head of the UCAS analytical group Igor Guskov