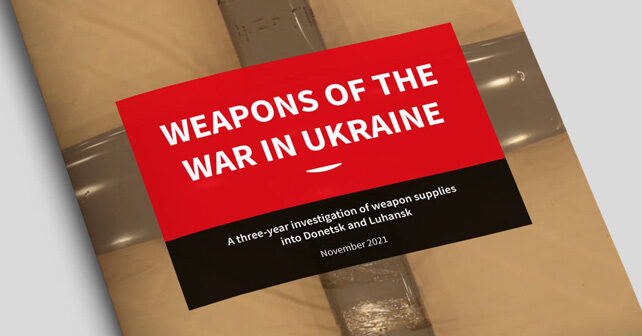 In early November, Conflict Armament Research (CAR) investigative organization published a study on the origin of the small weapons and ammunition used in hostilities in the east of Ukraine. This study was carried out with the support of the European Union and the German government. The authors indicate that the project lasted for 3 years.

The New York Times called this study “one of the most comprehensive to date on the issue… offering a fine-grained view of illicit weapons transfers in Ukraine and illustrating the scope of the arms trade that is fueling Europe’s only active war.”

In this feature we will take a high-level look into the content of the CAR report, offer our view on the implications of its findings, as well as correlate the methodology and focus of our British colleagues with those of InformNapalm international volunteer community.

Methodology of the Conflict Armament Research

In the conclusion of the report CAR researchers stated that efforts to verify claims on the armament supplies to the conflict zone in the east of Ukraine have so far relied largely on examinations of open-source photos and videos of weapons and ammunition, rather than systematic field-based investigations. To fill this evidentiary gap, CAR undertook a three-year field investigation of materiel recovered from the self-declared Donetsk People’s Republic (DPR) and Luhansk People’s Republic (LPR).

In line with the general approach of the CAR investigations, this study was mainly focused on tracing the origin of small arms and ammunition seized by the Ukrainian forces during the hostilities in the east of Ukraine. The highly granular and painstaking study of thousands of ammunition rounds, dozens of firearms and grenade launchers took practically a forensic approach – showing detailed scaled photographs and describing all markings and other particularities of every item studied. Researchers endeavored to trace every item to the factory of origin and establish its production date.

The report also contains a relatively modest section containing photos of several Russian trucks and combat vehicles, documenting obliterated side numbers, painted over tactical markings, and in some cases years of production.

Heavy weapons and modern types of Russian military equipment were not traced in this report.

The researchers managed to trace 41 types of small arms and thousands of rounds to the factories of origin, which in the overwhelming majority of cases are located in Russia. Tracing requests were sent to the relevant authorities and companies in many countries, but most importantly in Ukraine and Russia. The team received full cooperation from the Ukrainian side, but got no response from the Russian side.

Differences between InformNapalm and CAR methodology and approach

The most important methodological difference is that InformNapalm uses open-source intelligence (OSINT), whereas CAR uses the data from open sources only occasionally, preferring to work hands-on with the material evidence available.

In the introduction to the report, CAR states that Ukraine has been fighting against “separatist elements” in the Donbas referred to as “armed formations”. CAR stops short of giving any political assessment to its findings, being constrained by the scope and format of its research. We at InformNapalm international volunteer community, do not have these constraints, and take a different approach to the nature of the conflict. We have firm grounds to believe that Ukraine is facing the hybrid aggression of the Russian Federation, whereas local separatists in the Donbas are nothing but collaborators of an aggressor state, and “certain areas of the Donetsk and Luhansk regions” as well as Crimea are parts of Ukrainian territory occupied by Russia.

The CAR activity is focused mostly on the small arms and the origin of these arms in terms of their production. On the other hand, InformNapalm community took a conscious early decision to focus on the types of heavy and technologically advanced military equipment (artillery, main battle tanks, electronic warfare and drone systems, combat and transport vehicles, etc.) which are not in service with the Armed Forces of Ukraine and other security forces, but is (or was) in service with the Russian Army. We believe that the presence of this kind of equipment in the territory of Ukraine proves beyond reasonable doubt the participation of the Russian Federation as an aggressor state in the armed conflict in the East of Ukraine. InformNapalm also pays particular attention to the cadre Russian military personnel operating this equipment and weaponry on the Ukrainian territory.

Taking these differences into account, we tried to analyze the findings presented in the CAR report.

Notable findings of the CAR report and implications they carry

CAR took a somewhat compartmentalized approach to its own findings, leaving certain space for misinterpretations (e.g. the kind we witnessed in the New York Times article), or for the propaganda manipulations by the Kremlin. The omission of any mention of the heavy artillery systems and advanced electronic warfare systems (which have been documented in the conflict zone in the east of Ukraine not only by OSINT groups, but also by the OSCE SMM) could make an impression on an unprepared reader that this war is fought mainly with assault rifles. On the other hand, daily updates from the conflict zone by the Armed Forces of Ukraine show that artillery and sniper fire are the main cause of both military and civilian casualties.

At the same time, the findings of the CAR report in their entirety strongly point to the Russian Federation as the sole source of arms in the hybrid war in the East of Ukraine. With a pinch of analysis, these findings also disprove the talking points of Russian propaganda about “booty of war captured by the rebellious miners”, “military surplus shop”, or “finds in the coal mines of the Donbas” as the source of armament for this war. This report compellingly supplements the findings of InformNapalm and other OSINT groups with the data on the origins of the arms used in the war. It also provides a corpus of high-quality court-grade evidence against Russia as the aggressor state for the international courts.

We should like to thank the colleagues from Conflict Armament Research for their meticulous and professional work. We also offer our cooperation for any further research this organization might take about the war in Ukraine. We call on the diplomats of Ukraine to study the findings of the CAR report and add them to their toolset, together with the data collected by the OSCE SMM and OSINT groups.

This publication was prepared by Artem Velichko and Roman Burko specially for InformNapalm. Distribution and reprint with reference to the source is welcome!  (Creative Commons — Attribution 4.0 International — CC BY 4.0). InformNapalm social media pages: Facebook / Тwitter / Telegram.

InformNapalm does not receive any financial support from any country’s government or large donors.  Only community volunteers and our readers help to maintain the site. You can also become one of the volunteers of the community. We also ask you to support the development of the unique volunteer intelligence resource InformNapalm with your donations through Patreon.

No Responses to “CAR unveiled an investigative report on Russian weapons in Donbas. Analysis”