Crimes of the crew of Russian destroyer Smetlivy: from occupation of Crimea to provocations in the Black Sea 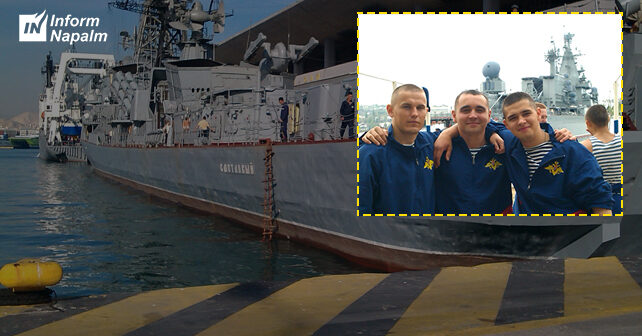 Volunteers of InformNapalm international community investigated participation of Russian sailors of the 11th Brigade of Anti-submarine Ships (BASS) in the aggression against Ukraine. In particular crew members of the Smetlivy destroyer of the Russian Black Sea Fleet were investigated, as well as recent examples of Russian provocations in the Black Sea. The servicemen, awarded for the occupation of Crimea, who continue to participate in the criminal actions of the Russian Federation on the occupied peninsula, were identified.

The reason for the publication of this investigation was information about another provocation of the Smetlivy ship crew. In early July 2019, the international exercise Sea Breeze-2019 started; 20 countries (19 NATO countries + Ukraine) participated in the event. During the exercise, the Russian Black Sea Fleet ship Smetlivy recklessly entered the closed area where naval artillery fire training was being conducted. According to MIL.IN.UA, the Russians later called this event a fiction. The Russian Federation once again used its typical tactic “they are not there”, denying the obvious.

In an interview with Apostrophe, Harry Tabakh, a retired US Navy 1st rank captain and ex-NATO representative in Russia, said, commenting on Russia’s provocative actions:

It’s such an agony, helplessness, impotence … What else can they do? I hope to God that they will do this without drowning and burning anything down, as it traditionally happens, and their own servicemen won’t die. That’s all. They went out and were looking, watching … Well, they were trying to interfere. When I served, when our aircraft carrier or aircraft carrier group went out to sea and our planes began to take off from the deck, a Hormone helicopter [Ed.: Kamov Ka-25] would take off from the Soviet ship and would just hover over our runway. They had no aircraft carrier, no aircraft carrier group of their own. What could they do? Just prevent our planes from taking off. We wouldn’t take off until it ran out of fuel and flew away, then we would resume our flights. They can’t do anything. They cannot build such an aircraft carrier group … they can only get in the way and that’s it. Here they interfere, but they do not understand that this interference is even better training for us.

However, lies and provocations are common for the crew of the Smetlivy. So, in December 2015, the Smetlivy destroyer supposedly fired on a Turkish ship, which was allegedly going to ram it. The Ministry of Defense of the Russian Federation urgently summoned the military attaché of the Turkish Embassy in the Russian Federation for consultations. However, according to the captain of the Turkish fishing vessel, he did not hear the shots and did not approach the Russian ship. The clue to this situation obviously lies in an event that happened a few weeks earlier, on November 24, 2015 – the Turks shot down a Russian military plane that violated the country’s airspace. In order to neutralize this case, humiliating in the eyes of Russian citizens, the Russians began to resort to such actions.

We have already written about the participation of 11th BASS in the operation to seize Crimea. In the article about the sailors of the 11th BASS we published evidence of the war crimes of the Russian sailors who served on the large anti-submarine ship Kerch. Today we identify several Russian war criminals from the Smetlivy destroyer (pennant number 810 until 2015, 870 since 2015).

Education: in 2013 graduated from the Kuban State Technological University, majoring in geodesy. He was drafted to the military service in July 2013. He served on the Smetlivy destroyer, as evidenced by photos, comments and videos from his social media account:

Photo of the announcement on the ship: “Comrades! There are 10 days left until the Smetlivy goes on a combat mission.”

Bushmelev’s commentary on the photograph: “The ‘Rusty dragon’ is now almost not rusty ) Before calling at Athens, we painted for days. Port of Piraeus”

Bushmelev’s commentary to the photograph: “Weeks and years will pass, but I will always remember!”

Bushmelev posted on his page an edited video filmed during the Smetlivy’ voyage to combat duty in the Mediterranean Sea.

Screenshot of the video in Bushmelev’s VK profile

For participation in the operation to seize Crimea Bushmelev was awarded a relevant medal. He posted a photo of the award certificate:

In the rest of the photos he poses with the medal on his chest:

After demobilization, Bushmelev worked at the North Caucasus Air Geodetic Enterprise, Expedition No. 205.

At work and in leisure time, he was often photographed in a cap with the inscription “Russian Navy, Smetlivy.

In the fall of 2015, the company where Bushmelev worked conducted geological surveying in Crimea. Bushmelev posted photographs taken in Crimea (Foros). Under the photo with geodetic equipment, the caption says: “At work”.

Other photos of this series: 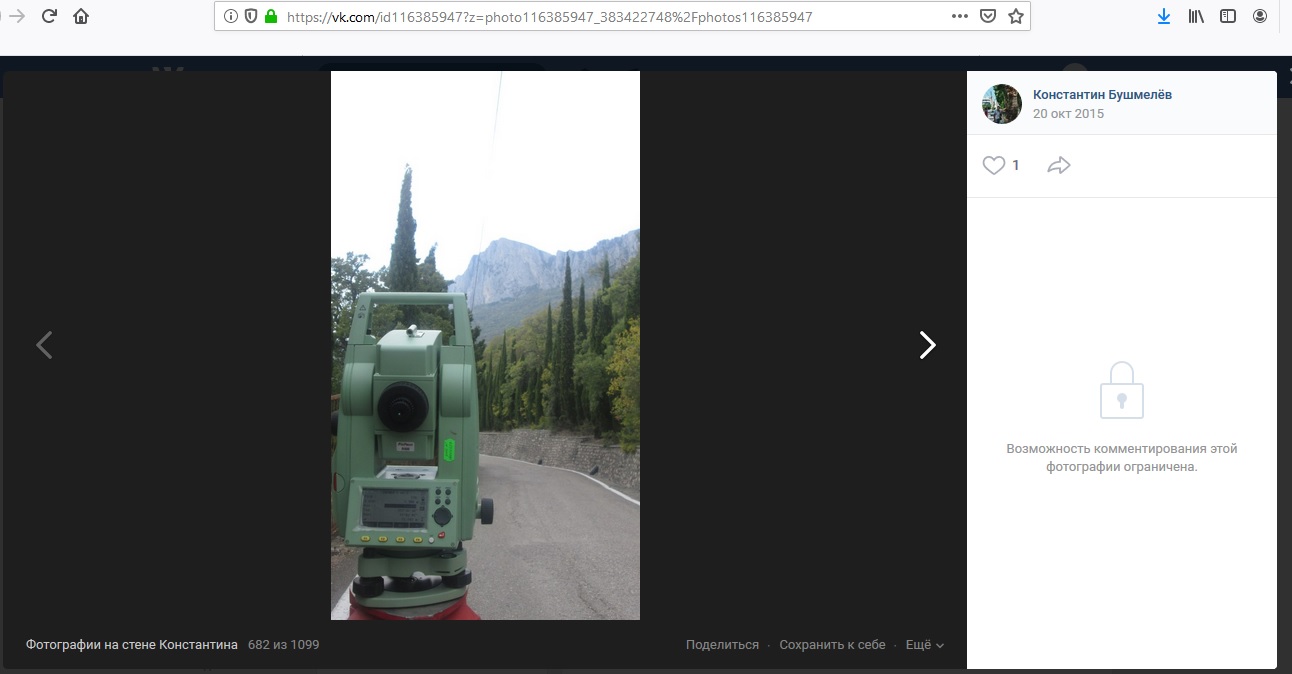 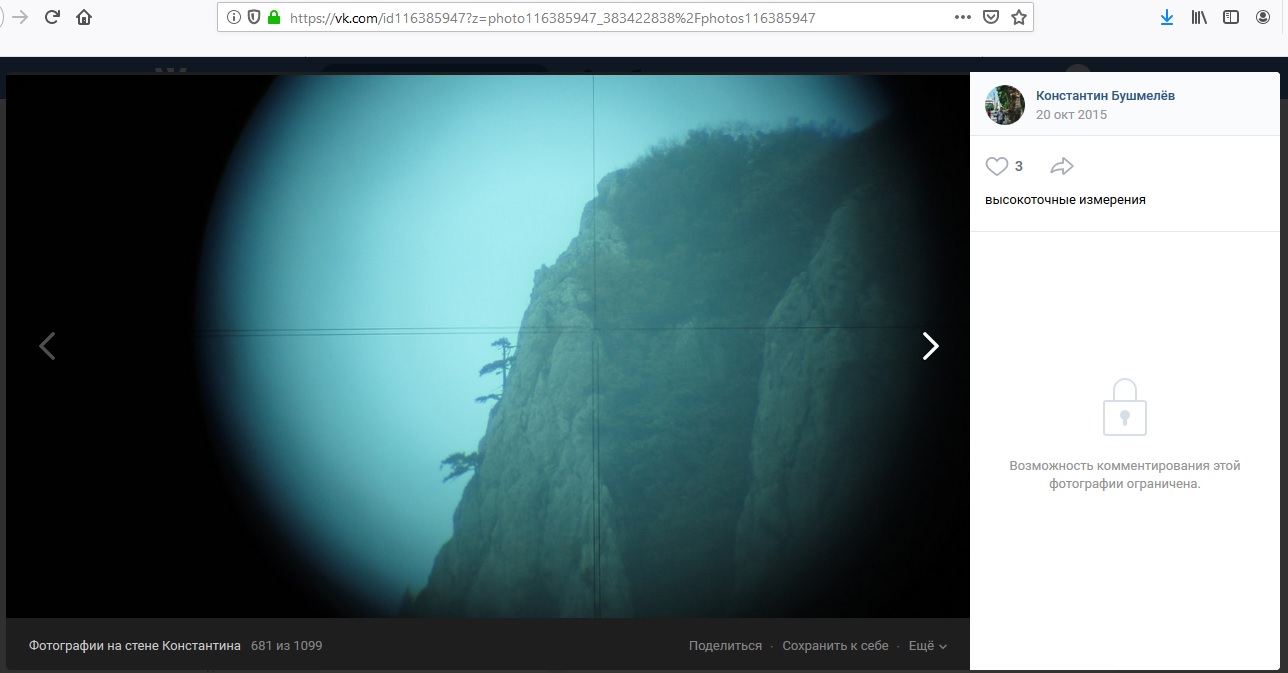 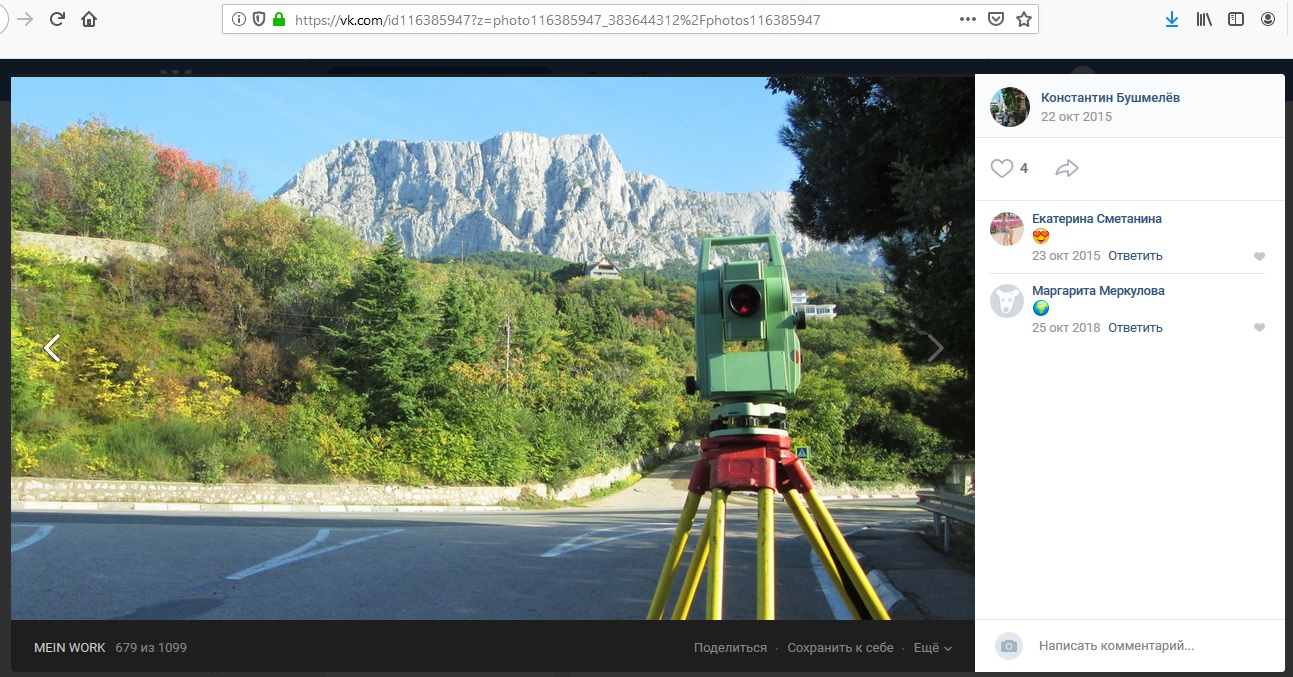 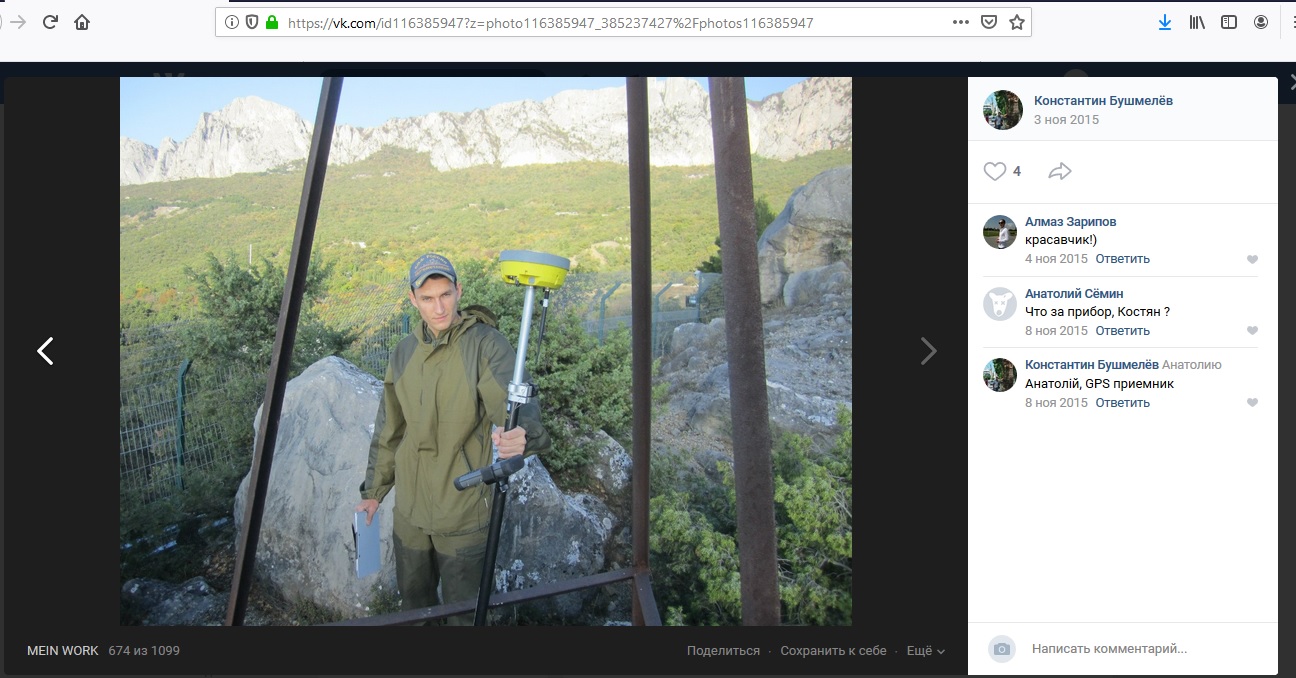 Any activity of the occupiers is illegal, including geological surveying and mining on the territory of Ukraine, so the company that conducted the surveying works must be included on the sanctions list.

In May 2019, the new photos appeared in Bushmelev’s album, showing him in the new summer uniform of the Russian Navy, evidencing that he has enrolled for contract service.

Two seamen – Evgeny Baturin and Andrey Prikhodko – were identified at 01:55 in the video from the YouTube channel of the Russian Ministry of Defense which recorded the initiation into sailors at the Smetlivy ship (we saved the video once again in case it was deleted).

Here is a comparison of the video frame with a photo from Baturin’s album. Baturin is marked red, Prikhodko – green.

Read more details about each of them below.

Evgeny Baturin (Russian: Батурин Евгений), born January 11, 1992. Judging by the number plates on the cars in the photo album and comments to the photo, he lives in the Chelyabinsk Oblast, possibly in the city of Chelyabinsk (1, 2, 3). He was awarded a medal For the Return of Crimea.

Andrey Prikhodko (Russian: Приходько Андрей Михайлович), born on January 23, 1991. His hometown is Salsk, he lives in Rostov-on-Don. In 1997-2008, he studied at school #28 in the village of Ivanovka, Salsk Raion. Graduated from the Azov-Black Sea Engineering Institute in 2013, studied at the department of technology for maintenance and repairing of agricultural machinery.

He was identified in the video of the Russian Ministry of Defense, which was filmed on the Smetlivy ship. He was awarded a relevant medal for participation in the operation to seize Crimea:

Captain of the 2nd rank, Andrey Zaitsev, the commander of the Smetlivy ship from 2013 to 2016 also features in the video of the Russian Ministry of Defense.

Translated by Artem Velichko. Distribution and reprint with reference to the source is welcome! (Creative Commons — Attribution 4.0 International — CC BY 4.0 ). You can also support InformNapalm with your donation so that you help the volunteers to cover the expenses on the site maintenance, and to promote our volunteer movement.

If you are viewing this article in the Accelerated Mobile Page (AMP) mode, some of the links and pictures might not be displayed. If you are interested in the whole content of this page, we recommend viewing it on a PC or laptop.

No Responses to “Crimes of the crew of Russian destroyer Smetlivy: from occupation of Crimea to provocations in the Black Sea”