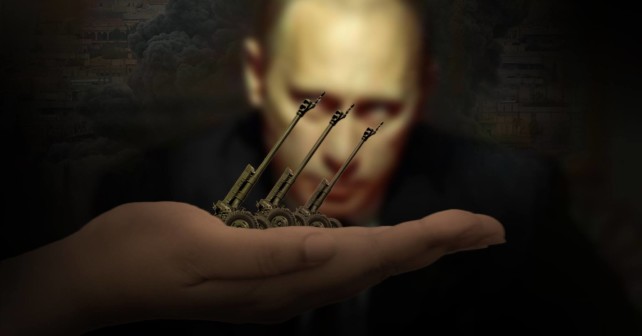 Amid a creeping information war waged against the civilized world on all fronts – in Ukraine, in Syria in the EU, it is crucial that the methods of this warfare are scrutinized to find an effective remedy and to reveal their malignant nature. One of the ways to fight back these hybrid attacks by the Kremlin is in-depth public enquiry into these acts, a job successfully done by the InformNapalm international volunteer community.

When analyzing open sources it is often tough to define who has become the first in disclosing information; when one OSINT researcher checks up on hundreds of accounts while another person does not even acknowledge the source when using the already analyzed data. We will not be talking here about moral values; anyway these researches can be characterized as superior ones with a good analytical basis. Over and over again we see how the respected European media use the 3rd parties’ data, which have a habit to just take our materials not mentioning the source and publish it as their own analysis.

For example, the InformNapalm’s publication from January 23, 2016 presented fresh evidence of the presence of the Russian military in the outskirts of the Syrian towns of Slanfah and Salma (link). On January 27, InformNapalm investigators found the Russian 34th brigade near Salma, as well as identified colonel Pankov, the 45th special forces brigade commander, on a still-frame image (link). After a three week’s pause a German medium published a story, but with a reference to Moscow researchers, who, following the InformNapalm’s publication analyzed the same video footage, of the Russian ground troops found in Syria, which had long been familiar to the attentive readers for quite a while (link). Several hours later the ‘hot news’ based on a ‘major score’ by the German portal and Moscow researchers was published by ‘Evropeiska Pravda’ [European Truth] (link) and immediately reposted by ‘Ukraiinska Pravda’ [Ukrainian Truth] (link).

It seems strange that some well-reputed European and Ukrainian media sites failed to apply more rigor and gave their readers an old story dressed up as breaking news. However, the matter is not the authoring priority, but rather that of the bias in intelligence and analytics in the Syrian and Ukrainian problems: Moscow tries to water down the information presented by blending it with a flow of irrelevant data to cover up important direct evidence. they feel convenient with and try to cover direct evidences behind a variety of indirect ones. We doubt that attempts to decipher ‘a Russian language speech’ on a video are more serious than identification of the concrete names and the Russian Army’s divisions. What is that supposed to mean? Is it an instance of obstruction or unscrupulousness on the part of information agencies about the information they are fed by the Russian ‘experts’ trying to dampen the wave of exposures?

Here we are going to analyze a video published in one of the Moscow agencies. This is just another Russian propagandist agency, which generates fake news on a regular basis. To confirm what is said in this article in the first paragraphs the InformNapalm research team has analyzed this video.

So, let’s have a look at the first video report, which starts with a typical Syrian dialog in pure Russian accent. Does the video look like an air force operation announced by Putin? Not really. It rather looks like a typical ground operation.

We see a 6U6 anti-aircraft machine-gun mount, a 12.7 mm ‘Kord’ machine gun on a tripod carriage. We have plenty of these in Donbas (a Russian-made machine gun on a Soviet mount designed in 1973). The brand-new condition of the mount is conspicuous. After some use, it must have had scratches from rocks. Having showed how the machine gun should be properly mounted, the instructor fires for sight calibration following instructions by a Russian spotter, who registers where bullets land via the scope sight. 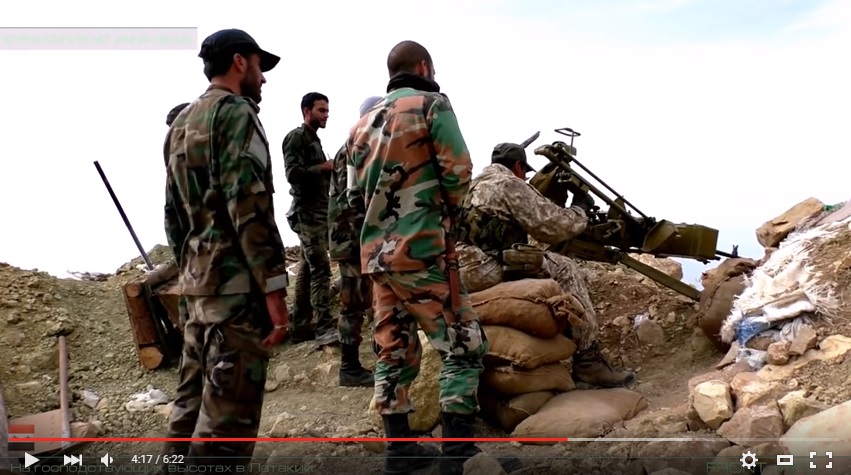 ­One can hear that an operator claims that the other side maintains a fire but it is clear that a machine gun is positioned and aimed to the side where explosions have been previously seen; so, it looks like they just opened a fire first and then recorded a video blaming the other side. The Assadites carry no personal weapons and walk upright, an unlikely behavior under real fire.

Therefore, the video in fact shows a staged mortar shelling and a machine gun adjustment fire by the Russian instructors.

Based on the analysis of many similar video materials it is possible to conclude that these ‘instructors’ are everywhere (near each machine gun). Here we see how the Russians teach one group of the Syrians to kill other groups of Syrians, and it is exactly what they do in Ukraine.

Episode two dubbed ‘Deliberate work by Syrian artillery in Latakia to contain (DAISH) hordes trying to break their way to the Latakia base’.

A three-gun ‘Msta-B’ towed howitzer battery, which the Syrian army does not have, opens high-angle fire (directed from an elevated position) upon an enemy aiming the targets in the valley behind mountains. One can hear the commands given in ‘pure local dialect’: ‘Ogon!’ [‘Fire!’ in Russian].

Let’s also see who are these ‘ISIS hordes’ and where are they hiding: in the Latakia mountains or it is just the Russian propagandists’ imagination playing brain games tricks. We approached Syrian specialists asking them to identify a locality of the shooting.

Here is their response:

The same place on the map. 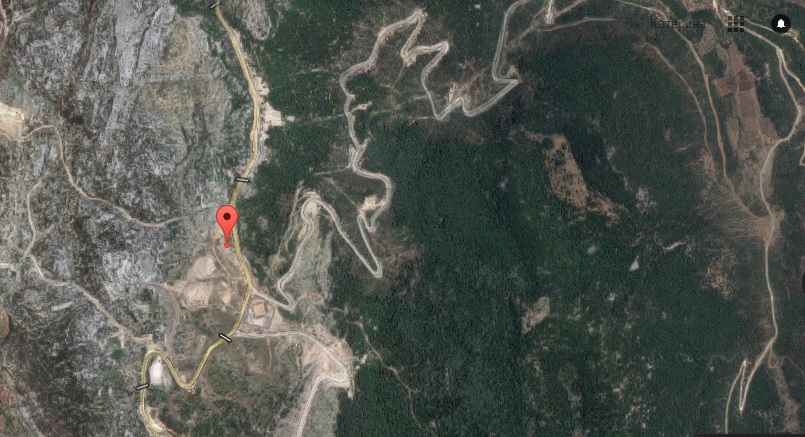 In addition, the Syrians have drawn our attention to another related video showing a checkpoint with three relaxed soldiers carelessly handling their rifles and feeling comfortable enough to walk upright and smile on camera. A strange way for staying alert to repulse imminent attacks by ISIS hordes. If we look at the checkpoint, in the left part of the screen we can see the very same howitzers positioned in the hills above. And vice versa, at 1:45 of the guns firing video, one can clearly see this checkpoint between the second and the third howitzers. So we now can get geographical bearings and establish the checkpoint location.

This building is clearly visible here (0:19): 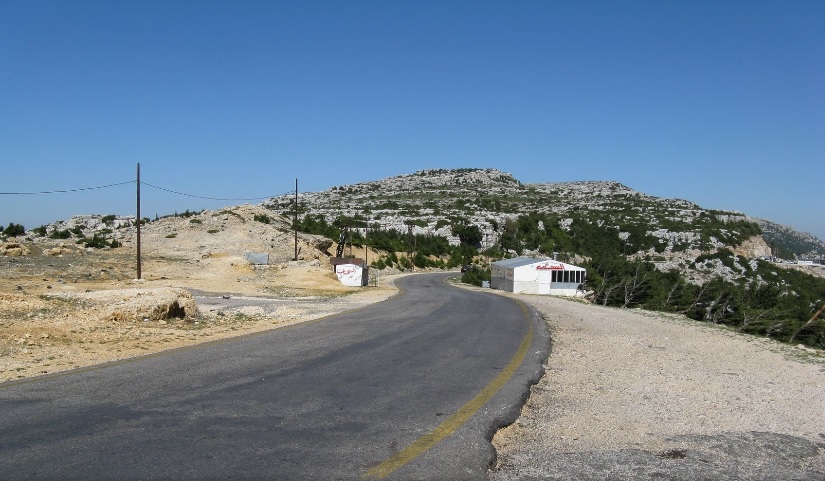 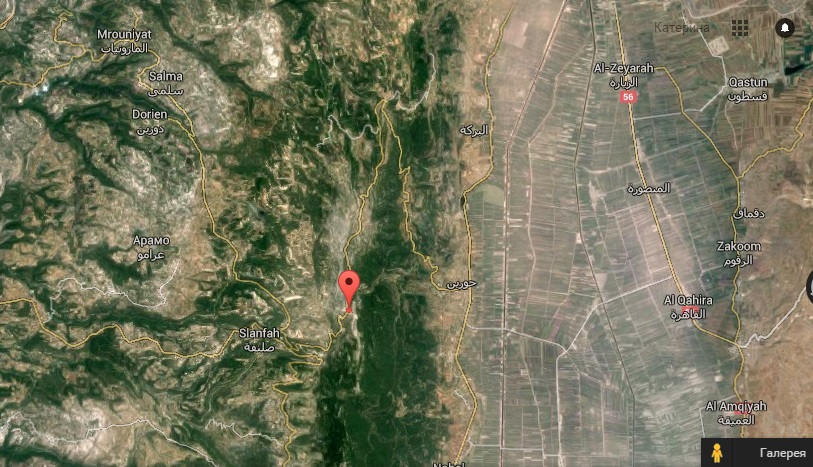 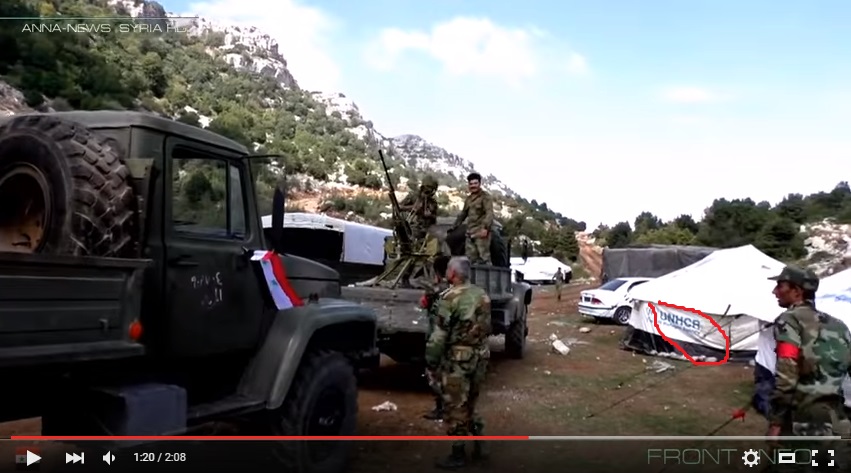 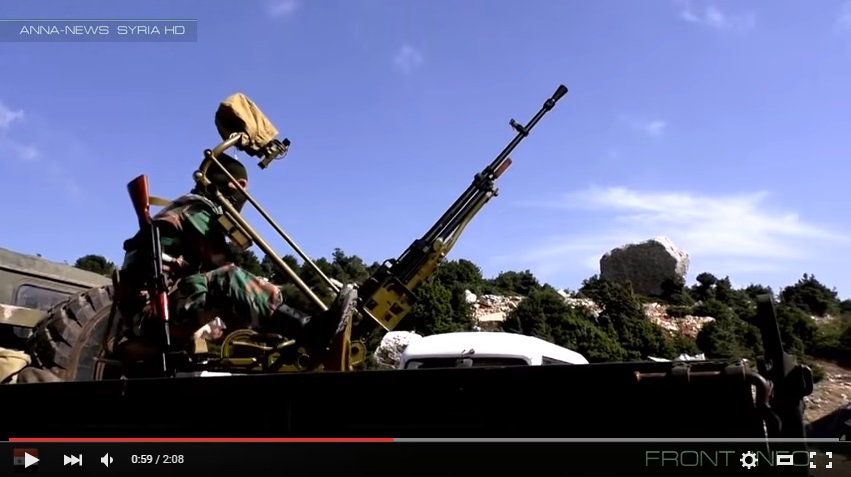 So, a video with a block post, which is not protected properly and where the very relaxed soldiers can be seen, voids another video (which was shot nearby) about the ISIS hordes: Russian propagandists unmask themselves once again.

Let’s try to find the exact target of this shooting. We did our calculations based on the battery location and a few other geotagging as well as the gun barrels’ direction. It was clear that the target was located behind two cities in a rear area of al-Assad military forces.

It is yet another lie by the Russian propagandists. Here we note that the site used by the Russian and Assad’s military to practice artillery firing is located in the rear of the Assad regime’s troops. Note that as the camera sweeps around one can notice other prepared caponiers and gun nests.

Let us summarize the findings: the Russian military men, the Msta-B battery, the deployment site. They lead us to another InformNapalm investigation: East Is a Delicate Matter: 29 Servicemen from 291st Artillery Brigade in Syria. These hapless gunmen, who like to have their pictures taken with exotic Syrian scenery in the background, had leaked the information on their location, while we know that the 291th brigade is equipped with the ‘Msta-B’ howitzers. Thus we established the actors filmed in the Russian propaganda videos.

The fourth video: a snipers training session (2nd min) – ‘Ivan’ he loses patience and switches to the Russian language and no interpreter is needed.

Here is again the UNCHR tent. The fact that UN humanitarian aid is used by al-Assad army could be explained by certain drawbacks in its distribution but also by miserable attempts to mask a training camp as a refugee one, which could be always use in case of the attacks by the propagandist media.        ­

Thus our analysis concludes the following:

Having studied the footage, the InformNapalm intel specialists identified the exact shooting location, its participants and the targets fired at by the artillery, established that the place is located outside of the combat zone, that it is used by Russian instructors to train Assad’s gunmen and often serves as a film set for staged propaganda videos. Whereas our ‘colleagues’ from Moscow could only find the obvious – the presence of the Russian servicemen and weapons.

P.S.: The video was released on the Internet on January 24, the InformNapalm intel specialists had worked on establishing the geographical locations, the direction of fire and analyzing the weaponry throughout January 24 and 25. This information was then transferred to the Syrian opposition, as well as military representatives of NATO countries. At the request of the Syrian military fighting the Assad regime, the publication of these data was postponed for operational reasons. Three weeks later, in view of a belated interest of mass media in this video footage, InformNapalm is lifting the veil again and putting emphasis on the information Russian researchers attempted to play down.